What Is a Parabolic Flute Drill?

The term “Parabolic Flute” applies to a specific geometry for a twist drill.  The geometry is altered to improve chip extraction, which leads to all sorts of advantages for Parabolic Drills:

If we look carefully at the two twist drill geometries, we can see how recognizable parabolic drills are: 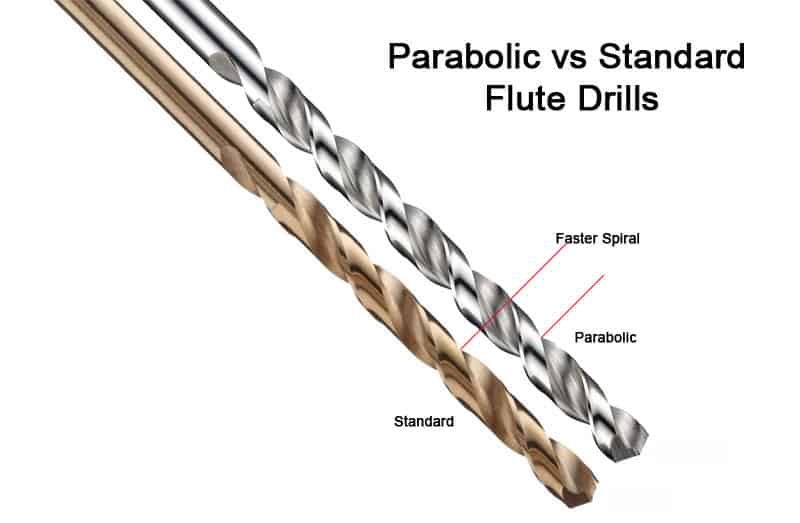 An end-on comparison is even more telling: 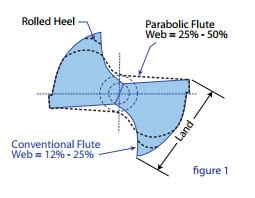 Flute shape of a parabolic vs standard geometry…

The name comes from the flat parabolic shape of the flute.  You can see from the diagram what all has been done to get the twist drill out of the way of the chips as much as possible.  This allows higher feedrates even for relatively short parabolics and I have heard from some machinists who use parabolics exclusively for that reason.  Kimball, another parabolic supplier, recommends avoiding parabolics for sheet metal because the flute shape can cause them to “corkscrew” through the material.

I think it’s also fair to say that parabolic drills are more premium (expensive) products, so most manufacturer’s are taking more care with them in general.  They’re just higher quality cutters.

When Do I Need to Use a Parabolic Flute Drill?

If you’ve ever used G-Wizard Calculator to try to figure feeds and speeds for deeper holes, you may have noticed it recommending a “Parabolic”:

As a matter of fact, GW Calculator will tell you quite a few interesting things to improve your twist drilling including when you need to use a Peck cycle (where the twist drill is retracted periodically as it moves down the hole to break chips) and what point angle will work best with your chosen material.

Once G-Wizard gives you a warning, it means you’re likely to have problems if you try to drill the hole without the requested drill geometry.  Geometry is they key word in this case, and you can get G-Wizard to calm down and give you some feeds and speeds by popping open the Geometry window and selecting Parabolic flutes.

So what are the governing these recommendations?

–  At 4x diameter, it will start asking you to peck drill.

–  At 8x diameter, it will ask for parabolic flutes

–  At 20x diameter, it’s become a black art.  Time for some sort of custom Deep Hole Cycle g-code programming and maybe a call to your tooling dealer for something that’s probably either very expensive or very slow.

As you can see, there’s some complexity involved with any hole more than a few diameters deep.  The reason the Parabolic Flute Drill can help is its unique flute design.  Here we can compare standard versus parabolic flutes side by side:

The big deal on the parabolics is the faster spiral.  I’ve marked the same number of turns in the diagram, and we can see that for a given number of turns, the parabolic will have moved the chips further up the helix due to its faster spiral.  Parabolic drills often have other geometry advantages including more room in the flute for more chips and a wider web on the tip for greater durability.

Parabolics are quite a bit more expensive than the average jobber length twist drills, but for deep holes, they’re darned well worth it.  They may even be worth it in shallower depths just because of the increased feedrates they can bring. 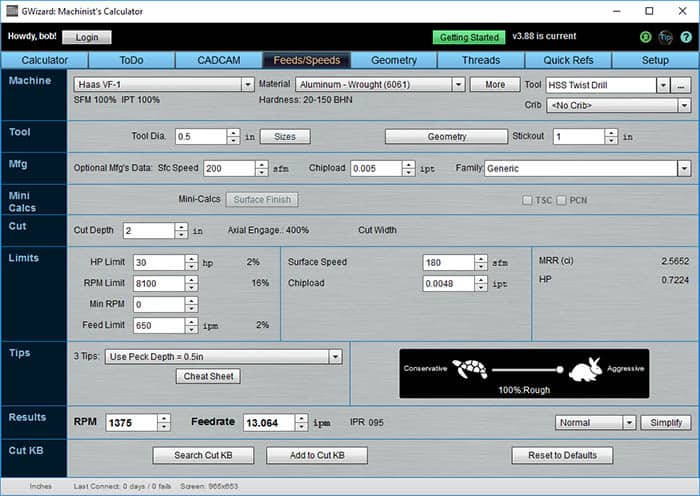 The Material Removal Rate is 2.57 cubic inches per minute.  Now, let’s try that same hole with a Parabolic Drill.  To change, click the Geometry button: 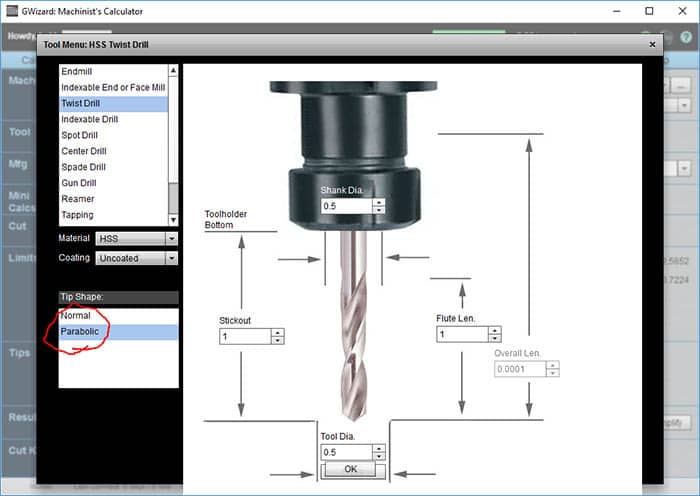 Here are the feeds and speeds with Parabolic: 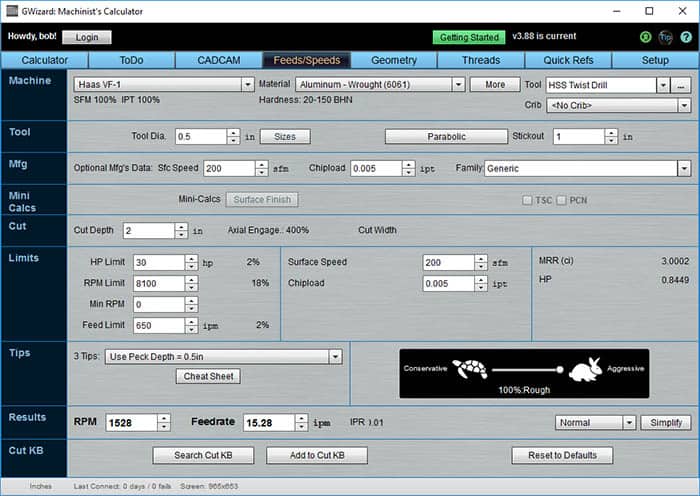 The MRR goes from 2.57 to 3.00 cubic inches per minute with a Parabolic drill…

The MRR goes from 2.57 to 3.00 cubic inches per minute with a Parabolic drill.  That’s about 17% faster–worth it for many jobs!

If you haven’t tried our G-Wizard Feeds and Speeds calculator, get a free 30-day trial.  Not only does it make these useful recommendations such as when you need a parabolic drill, it does a whole lot more besides!

Check Out the G-Wizard Calculator