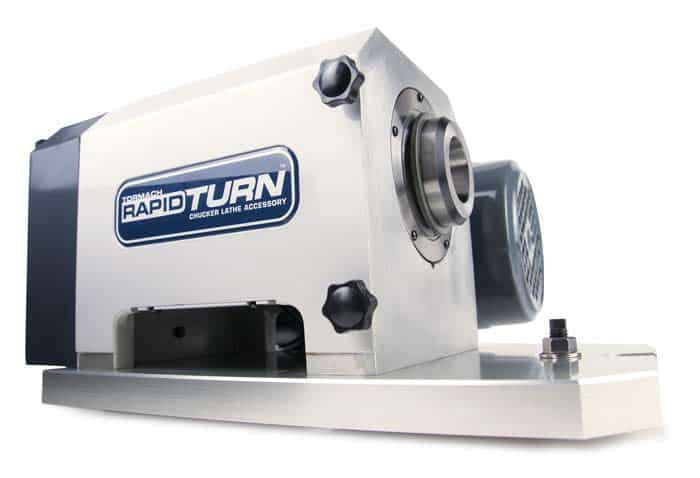 Ever used your VMC to turn parts?  Not so much I bet.  A lot of CNC Lathe users, OTOH, have probably milled parts, provided they have live tooling.  In fact, I’ve talked to many who prefer to mill on their lathes when the nature of the part makes it possible.  A lathe with bar feeder can run unattended for quite a long time churning out simple parts.

But there’s value in being able to turn parts sometimes on your mill too.  I’ve come across folks doing this at various points.  I’ve written about how Renishaw has done it as part of their RAMTIC methodology to make their probes.  They basically stuck the part in a tool holder, moved the toolholders from one machine to the next on a pallet system, and the spindle would just grab a tool holder while the turning tools were mounted to the table of the VMC.  Works great, though I’m sure it’s a touch funky to program until you get used to it.  The idea that tool holders and pallets could be used in this way on VMC’s was definitely a strong piece of out-of-the-box thinking.  More recently I’ve seen folks stick parts in a collet in their mill spindle and using the same mount the tool holder to the table approach, they do turning on even simple CNC machines like Tormachs. 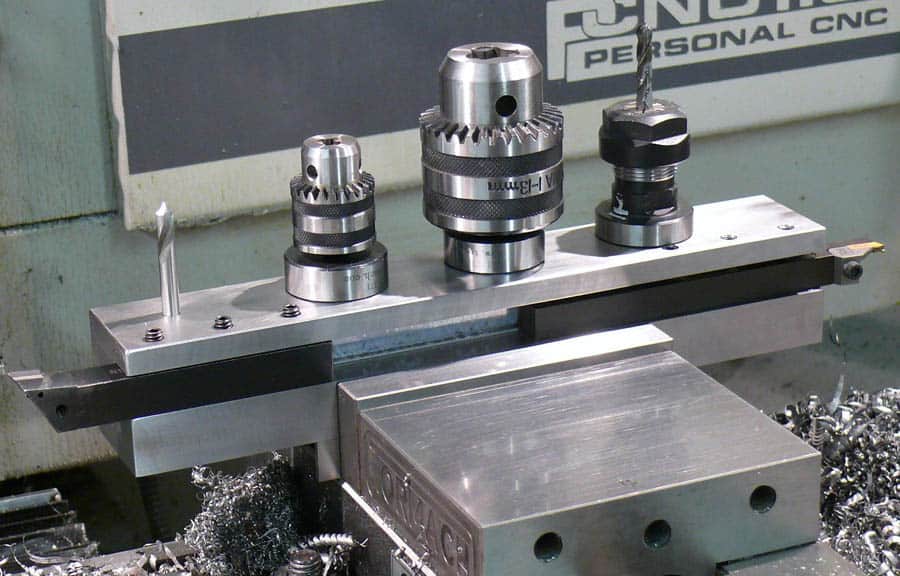 Lathe Gang Tooling for Turning on a CNC Milling Machine…

That was all heavily a DIY and more importantly (machinists can handle DIY–we can make almost anything we want to when we set our minds to it) “figure-it-out-yourself”.  There have been some products on the market.  One of the slickest was Steve Simpson’s combination 4th axis and lathe headstock that I wrote about back in 2012.  Now Tormach has introduced RapidTurn, which looks to me like has the potential to become more mainstream.  It’s an outgrowth of their Duality Lathe program.

The Duality Lathe involved mounting an entire 7″ x 14″ Chinese lathe (essentially) to the table of a Tormach CNC Mill: 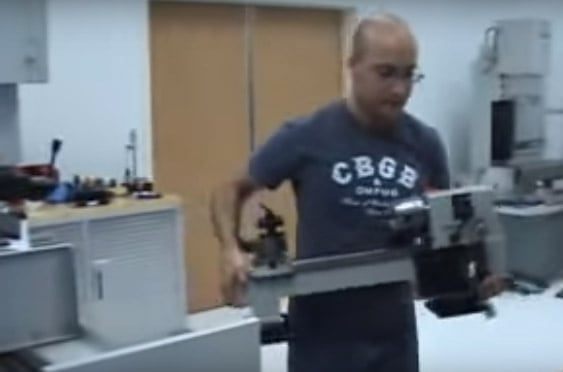 The Duality Lathe was an innovative idea, but not very robust.  The little lathe had minimal capacity, questionable rigidity, and was heavy to put onto or take off the table.  But, it enabled Tormach to get experience with the “Turning-On-A-Mill” paradigm and understand how customers would use such a tool.  That experience was essential to enabling them to create their next generation product, which is called RapidTurn.

RapidTurn is in every way a much more robust unit than Duality.  There’s some pretty clever stuff going on here:

I suspect from the look of things that the RapidTurn will share other interchangability with the full scale SlantBed Lathe, though I don’t know that for sure.

So what can you do with a RapidTurn and why might you want one?

For started, it’s just about the cheapest way to add CNC Turning capability to your shop if you’re a hobbyist.  And if you have a CNC, you know how much your productivity goes up versus manual machining.  Tormach views the RapidTurn as a good solution for space-constrained shops.  If you have a garage shop with a PCNC 1100 or 770 mill, it’s probably taking up quite a lot of your available space.  You might not have room (or budget) for a full scale CNC Lathe like the Tormach Slant Bed.  In that case, a RapidTurn will have you making turned parts with CNC in no time.

Here’s a neat demo of the RapidTurn making a Rook piece for a Chess Set:

There’s not a tremendous amount of information available for the RapidTurn yet.  That’s provoked some thoughts and questions.  For example, looking at what photos and video is available, I wonder whether it’ll fit if you have a Toolchanger on your Tormach mill?  I also couldn’t find the basic specs such as motor HP or spindle bore, not to mention, dimensions, weight, and intended swing for parts.  I’m sure someone from Tormach will drop in soon and answer those in the comments.

My other thoughts go to using the RapidTurn more generally than as a solution when you don’t have room for a real CNC lathe.  Using it routinely when it makes sense to both mill and turn parts, for example.  And of course as a Hot Rodder from way back, I inevitably wonder what improvements lie in store for the future.

It would be slick if there was a way to use a RapidTurn on any arbitrary CNC mill, for starters.  That’s not necessarily easy from a software and interfacing standpoint–how do you get the encoder from the RapidTurn to talk to a CNC Mill with a Fanuc control, for example?  The other thought is how to use it as a fully indexable 4th axis when milling, and how to make it compatible with the Tormach Tool Changer?  Even if we could only use RapidTurn on Tormachs, the latter features would be seriously sexy.

It seems to me that being able to index for milling requires either replacing the motor with a servo (more expensive given servo size, but potentially cleaner) or adding a smaller servo and you do a belt change to switch to 4th axis mode.  It’s likely that a 4th axis mode would also require mounting a disc brake, perhaps in place of the index wheel, so that the axis can be locked once indexed into position for increased rigidity.  Those modifications seem relatively straightforward, they’d add a lot of power, and they’d make RapidTurn a more desirable accessory that you’d be likely to use more often–it serves both for turning and as your 4th Axis for pure milling jobs.

The Tool Changer thing is going to be more difficult.  First, we have to learn whether there’s enough clearance to even use the Toolchanger with a RapidTurn.  Then we have to figure out how to mount lathe tooling in some other way than the AXA-style QCTP that clamps to the existing spindle nose.  The latter is surely in the way of any potential tool change but also of milling.  That raises another question–does it index in some way or do you lose all your offsets if you swap it out to do some milling?

I can actually envision it being possible to create a TTS tool holder that can hold lathe tooling and that would lock up for enough rigidity for light turning.  Two things are required:

I’ll just day dream a bit here as an armchair engineer (Tormach’s Engineers probably already have way better solutions on their drawing boards).  Let’s take the indexing.  The easiest (though not the cheapest) solution is to swap out the VFD for one that can do indexing, add a sensor to the spindle pulley arrangement on top of the spindle, and that would give the mill spindle positioning.  VFD’s that will do that are readily available.  Delta makes a 3HP sensorless vector unit with spindle indexing for a little over $500.  That’s the one Dave De Caussin has used on his CNC mills.  Add a Hall Effect or optical sensor for maybe another $150 and you’re there.  The fringe benefit is even your milling is more accurate because with spindle indexing, you’ll have repeatable runout interaction between the spindle and toolholder.  You can even “clock” the toolholders in the changer to minimize runout.  I don’t know what Tormach pays for VFD’s, probably less, but they are probably in a position to negotiate this feature into their VFD’s for pretty low cost.  If the mills leave the factory set to go, they could offer an upgrade that consists only of the sensor addition for folks that need or want it.

That leaves locking things down for adequate rigidity.  I can see this happening in one of two ways:

These arrangements are probably not as rigid as the AXA QCTP, but they would enable full tool change and fully operated operation as a live tooled lathe–it seems like a worthwhile tradeoff.

Now for a non-Tormach machine, to get full mill-turn capabilities is harder.  As I mention, interfacing spindle indexing is tough.  It seems the approach of putting parts in tool holders and thence into the spindle works better.  That leaves the question of tool changing the turning tools.  Gang tooling seems to make that easy.