Build a Powerful Tramp Oil Skimmer for Your Coolant 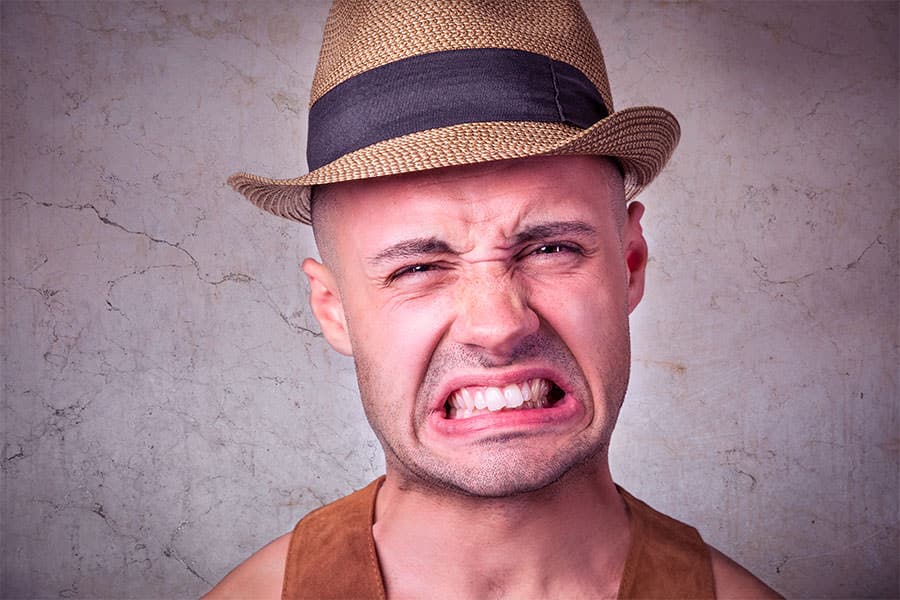 Dang that coolant is stinky today!

Flood coolant is a fact of life for many CNC operations, even relatively small machines like the Tormach 1100 in my home shop.  Another fact of life is that if left to its own devices, coolant will accumulate impurities that can leave it very stinky–your nose literally doesn’t want to get anywhere near it, let alone putting your hands in the stuff or getting it splashed on you.

What usually happens is you get a layer of what’s called “Tramp Oil” that floats on top of the water-based coolant.  As soon as there is enough of it to completely cover all the available surface area in the your coolant reservoir, the coolant gets cut off from air and there’s no oxygen in it.  It’s that lack of oxygen that makes the coolant a suitable living area for anaerobic bacteria, and they’re what generate the stink.

So what to do?

Well, you can delay the problem for a while just by putting a cheap aquarium bubbler into the coolant.  It stirs up things so that its hard for the oil film to keep everything covered and puts a few bubbles of air through the coolant as well.

This helps, but with enough Tramp Oil, it will eventually lose the war against the Stinky Bacteria.  You can put additives to kill the bacteria and do various other things, but the accepted solution is to find some way to skim the Tramp Oil from the coolant.

There are a variety of mechanical devices available to perform this service.  Some use a rubber band on two rollers that travels beneath the surface of the coolant, back up, dragging an oil film with it that gets squeegee’d off the band and into a little collection can.  Another variety uses a disc, sort of like an old vinyl record to do the same thing.

There are much more sophisticated devices available, but I like a very simple device that relies on the oil’s propensity to float on the surface of the water-based coolant.  It works like this in principle: 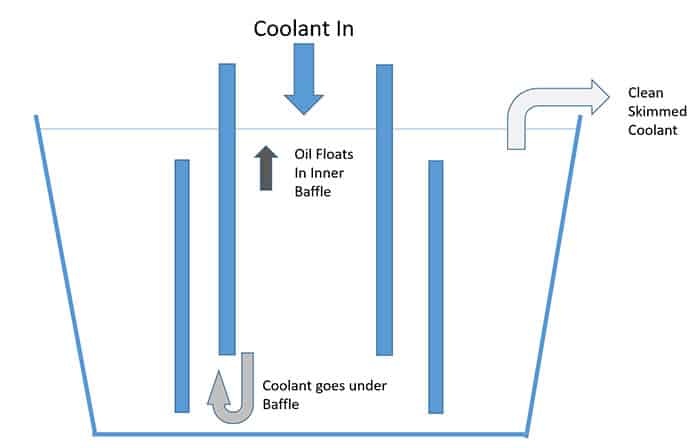 Oil floats, and can’t get around the baffle…

Since the oil floats, it can’t get far enough below the surface of the coolant to get around the baffle.  In fact, if you use a tall inner baffle made of fat PVC pipe, you can arrange to swirl the coolant in on the sides in a helix.  This slows it down, gets it moving sideways so there’s no downforce, and generally creates a sort of liquid vortex separator.

Building one of these is simplicity: 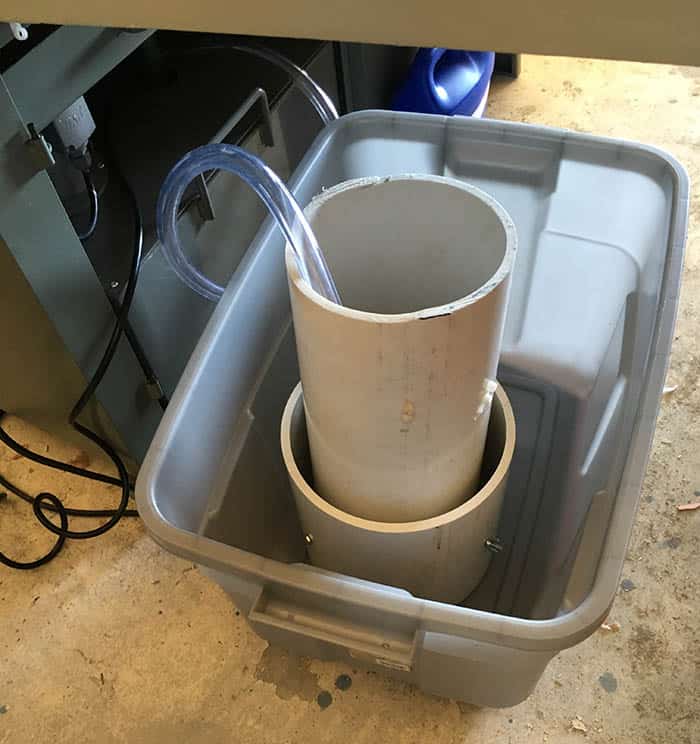 I stuck a 15 gallon tub on a cheap furniture dolly so I can move it around easily, then I took two diameters of PVC pipe and bolted them together to make the baffles.  A pond pump or two to circulate the mixture and that’s all it takes!

My Tormach’s coolant reservoir really doesn’t have enough capacity either.  With enough chips in the enclosure, the coolant sticks to the chips and takes to long to run back down.  So, my big tub adds capacity there too so the coolant never runs out.

Periodically, you want to go into the center baffle with a dipper and remove the worst of the Tramp Oil. Meanwhile, most of the coolant has plenty of clean surface area so no bad bacteria can get their start.  And, since I run it the whole time I’m using the coolant, it’s constantly being cleaned.

You could also wheel a rig like this (or similar) around from machine to machine to perform some coolant maintenance if you didn’t want to dedicate one to a machine.  I find the roll out tub makes it easy to check the coolant concentration and change the mix as needed too.

What do you, my fellow CNC’ers, like to use for Tramp Oil Skimming?