Tormach Lathe Tooling and News on a Shipping Date I wanted to give another update on my Tormach CNC Lathe this week.  I’ve been one of the Beta Testers.  Good news is that Tormach has announced the Beta Test is winding down and they’re hoping to make first sales in Q1 2014–right around the corner, in other words.  I know from my perspective the Beta Testing has gone extremely well with only minor teething troubles, all of which were corrected.  In addition, the Beta Team gave Tormach a number of constructive suggestions for how to improve the already very nice machines and most all of these were accepted.

I want to talk just briefly about the Tooling for the lathe.  As the Tormach article I’ve linked to mentions, you will need to make some critical tooling decisions up front–particularly with respect to the Turret.  I should say that all of the Beta Testers, including myself, bought the turret.  All of the others immediately started using their Turrets almost exclusively and report they work great.  I have not installed mine yet, having opted to try each of the options (QCTP, Gang Tooling, and Turret) individually.  This lathe is unique in that it has so many options.  The turret is really first class, and is sourced from a company that makes the same turret for much more expensive lathes.  At one point there was a question about whether the turret might be too big for the lathe and whether a smaller one should be fitted, but it was decided to keep this one available.  Having 8 positions on the turret is a nice luxury compared to only have 4 or 5 with a smaller turret.  You can get a lot done with 8 tools.

I think at least one of the other testers is using the combination Turret and Gang Tooling configuration.  This is also a very slick setup for the lathe because it just adds even more tooling positions.  They’re using the gang for the tools that change the most often–twist drills and taps–which makes setup very fast for a new job.

One of the things pointed out in the Tormach link is that if you want the turret, it will only be offered with a full enclosure which will not be available when the lathes first ship.  I’m definitely going to look into adding a full enclosure to mine, but the Beta Testers report that when coolant hits the spinning chuck it’s makes a tremendous mess throwing coolant everywhere–hence the desire for an enclosure.

I started out with just a QCTP to try to recreate the experience of a hobbyist purchaser.  Yes, there will be hobbyists that go for the gang tooling or turret, but there will also be a lot of folks just looking for a great deal on a very solid CNC lathe for their home shop.  I am happy to report that this lathe is very nice to use with a QCTP.  In fact, I plan to keep the QCTP even after I mount the turret as it is very convenient for swapping in tools that are job-specific, such as a twist drill or a tap.

One thing I did a little differently was to mount a Swiss Multifix-Style QCTP to my machine instead of the usual Aloris clone.  Here’s an Aloris (shot taken when I visited Tormach in Wisconsin) and right below is the Multifix clone I got: 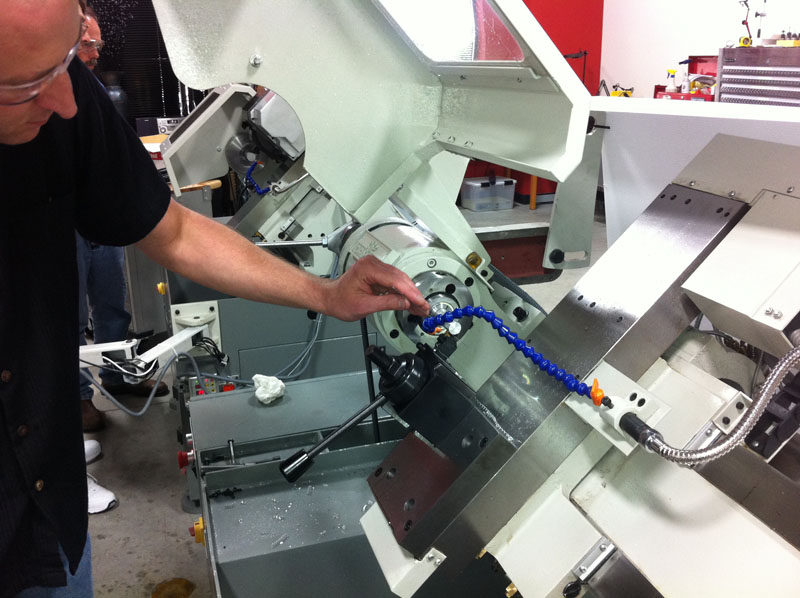 The Aloris is pretty good sized on the cross slide… Here is the Multifix-style Quick Change Toolpost.  I’m using the chuck face to square up the part-off tool…

In the picture of the Multifix, you can see it’s quite a bit more compact than the Aloris.  I think it’s better suited to this machine in terms of overall size.  I was advised by several machinist friends that the Multifix-style QCTP’s are more repeatable than Aloris.  You don’t see them very often over here (usually on a nice Hardinge HLV-H when you do) but they’re more common in Europe.  I bought mine from an outfit in the UK called Rotagrip.  They were very easy to deal with, prices were reasonable, and they shipped an A-Series QCTP kit to me straight away.  In retrospect, I could’ve gone one size larger, but this one is fine.

While not as plentiful as Aloris, you can find quite a bit of Multifix Quickchange holders on eBay and I picked up some extras.  Aside from the repeatability, the Multifix seemed better made than the Aloris QCTP’s I had seen.  Their cam action works better and importantly, the Tormach lathe can have an interference between the chuck guard and the handle of an Aloris-style QCTP.  With the Multifix, the handle is on a built-in 12-point socket that makes it easy to remove or simply to reposition out of the way.

For the basic insertable cutting tools, I used 1/2″ holders made by Micro-100 that are quite nice and reasonably priced: These work great for the basics and are a good size for the lathe.  You can mount 3/4″ shank holders as well, but these are better unless maximum rigidity is needed.  For threading, I picked up Carmex kits for internal and external threading.  They use carbide inserts and are super easy to set up and use.  That just left me needing some way to hold twist drills, center drills, and taps, since the lathe has no tailstock.  That proved to be a stickier wicket.  I’ve seen a fair number of drill chucks on Aloris holders, but not so much the Multifix.  After looking around, I decided just to make one from a Multifix Boring Bar Holder: The idea was to fit a Tormach TTS ER20 collet chuck to the Multifix Boring Bar Holder using a little adaptor bushing.  This was a very easy job on the Tormach Lathe as you can imagine.  I decided to use brass just because I love working with it and had a little slug of round stock that was just the right size.  I decided I would create an offset hole so that I could set the gross height just by rotating the brass piece.  This makes it easy to put any round tooling into the QCTP as needed.  I probably should make at least one more of these so I can run a twist bit and a tap.  Come to think of it, 2 more so I can have a center drill, twist drill, and tap would be nice.

There’s been more going on behind the scenes with the lathe, but this is all I have pictures of for now.  More news as it is available!

Feel free to shoot me questions about the lathe in the comments.  I am happy to help as I can.