What is a Cut Knowledge Base?

The Cut Knowledge Base (Cut KB) is a powerful feature normally only found in the most high end CAM packages where it is often part of a set of features referred to under the heading of “knowledge based machining” or “KBM”. The idea behind the Cut KB is to facilitate the gathering and organization of your shop’s best practices around cutting feeds and speeds and the performance of your tooling to create a Knowledge Base (similar to a database) that captures that experience.

For a shop to obtain the peak performance from its tooling, some experimentation is called for. It is nearly always possible to go faster than the tooling manufacturer’s recommendations for speeds and feeds under the right circumstances. The role of the Cut KB is to capture how much faster and to document those “right circumstances” so you can do it again and again.

Every time a g-code program is run, the opportunity exists to learn something new about the capabilities of your machine and tooling. If it’s appropriate to conduct an experiment (bumping up the feedrate override, for example), use the Cut KB to document what happened.

Every time you create a new part program, refer back to your Cut KB to see what has worked in the past and to make sure you’re using the optimal cutting parameters for your new program.

The Cut KB is accessed via two buttons at the bottom of the Feeds and Speeds tab: 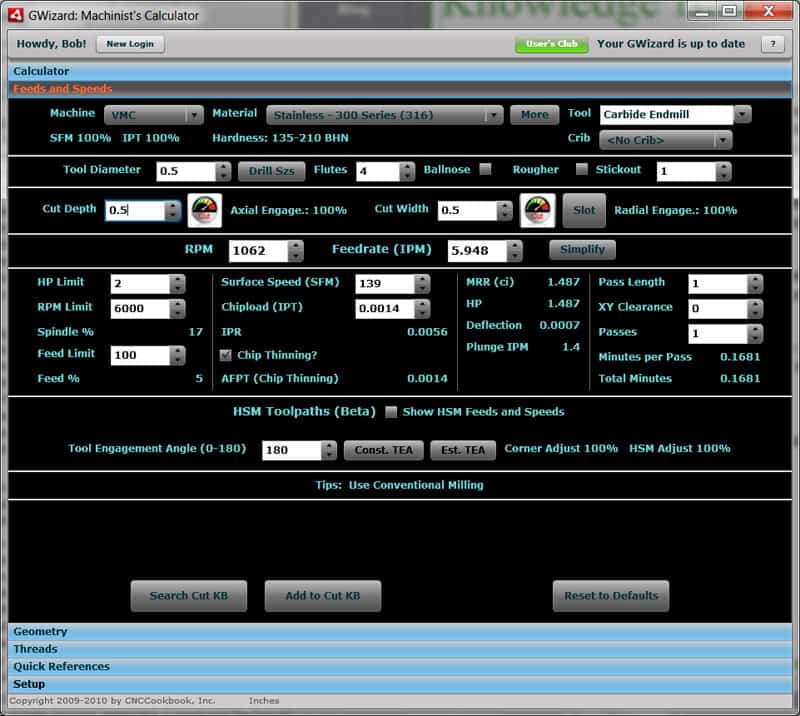 To add new entries to your Cut KB, press the “Add to Cut KB” button.

To search or edit your Cut KB, press the “Search Cut KB” button.

Adding Entries to the Cut KB

Before you can do much with the Cut KB, you have to add some entries to it. You should only add entries that represent the parameters for cuts you’ve tried in real machining operations. To create an entry, fill out the G-Wizard Feeds and Speeds tab with the parameters of your cut and press the “Add to Cut KB” button. Be sure you have the cut just the way you want it before pressing the button as you won’t be able to change anything accessible on the Feeds and Speeds tab from the “Add…”, it just copies the values from Feeds and Speeds.

When you press “Add…”, you’ll get a popup like this: 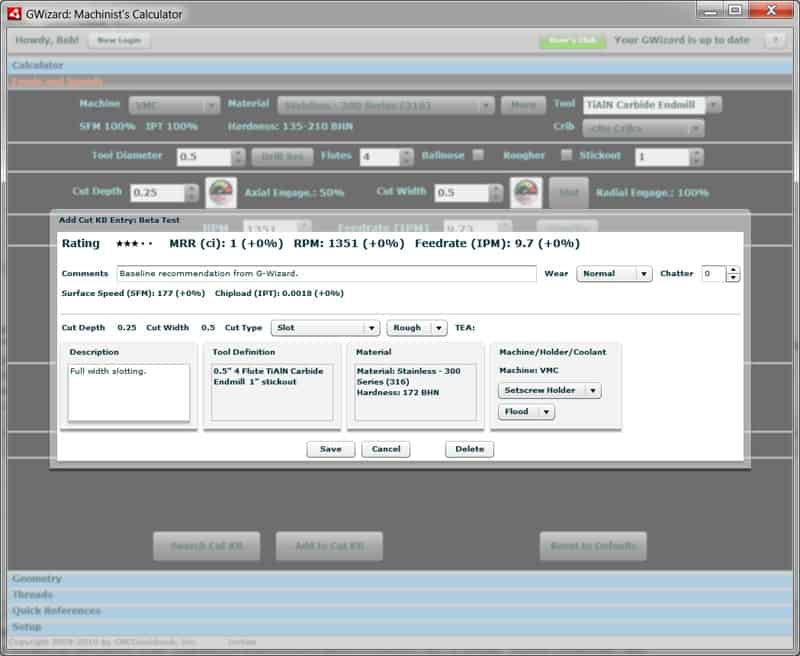 While the information covered on the Feeds and Speeds tab may not be edited in the popup, a number of new pieces of information are there that are designed to help you do a better job describing the results of the cut as well as the conditions.

For results you get to specify:

– A rating from 0 to 5 stars. This is your subjective rating of the usefulness of the cut. The example shows three stars. Just click on the slot for the number of stars you want to assign.

– A comment. I’m saying that this cut was run with the vanilla recommendation from G-Wizard.

– An assessment of the wear on the tool. Possible values include “Normal”, “Poor”, “Chipped”, and “Broken”. If you try a cut that is problematic due to wear of some kind, be sure to document and save these cuts in your KB as well so you can avoid them in future.

– An assessment of any chatter encountered with a rating from 0 (None) to 5 (Bad). Chatter is a reproducible phenomenon and Cut KB is an excellent tool to help you master chatter.

– The Cut Type tells what kind of cut was being attempted. There are different values available for mills and lathes:

For lathes all the normal operations are there:

– Description is a place to add any keywords or description of the cut that helps clarify its purpose or use.

– Holder is where you specify what kind of holder was used with the tool. Choices include ER Collet, TG Collet, Setscrew Holder, Hydraulic, Milling Chuck, Tribos, Shrink Fit, Drill Chuck, or Floating Tap Holder. The type of holder has a huge impact on the performance of your tooling.

– Coolant is the last choice you can record. Choices include Flood, TSC (Through Spindle Coolant), Mist, Air, and None.

Note that you’ve probably changed things from what G-Wizard recommends as part of looking for more performance. That’s no problem. The Cut KB expects you to have overridden some aspects of the cut, for example the RPM, Feedrate, Surface Speed, or Chipload. Just go ahead and type in those overrides before pressing the “Add…” button.

When to Add Entries to the Cut KB

You’re certainly encouraged to add an entry for every cut you try. It’s best not to enter “theoretical” cuts that are untried because you will have no way of knowing what results (such as chatter, wear, etc.) to assign to such cuts.

What’s most important is to add cuts that represent extensions to the envelope. Cuts where you’ve gone successfully faster than ever before and cuts where you went too fast and failed are the most valuable to have available. The failures will help you define future experiments, which should involve running more slowly (although not always, if you’re familiar with stability lobe diagrams and chatter, sometimes its better to crank it up further if a cut is failing due to chatter).

Let’s say you’re sitting in front of your CAM program and you want to use the Cut KB to determine the best possible feeds and speeds for a particular operation. Your first step is to enter all the relevant parameters for the cut in the Feeds and Speeds tab. Next, press the “Search Cut KB” button to see what’s available.

Let’s say we’re trying to do some pocketing in stainless steel with a 1/2″ TiAlN 4 Flute endmill. After entering the various parameters in Feeds and Speeds, we press the “Search Cut KB” button and up comes the result of our search: 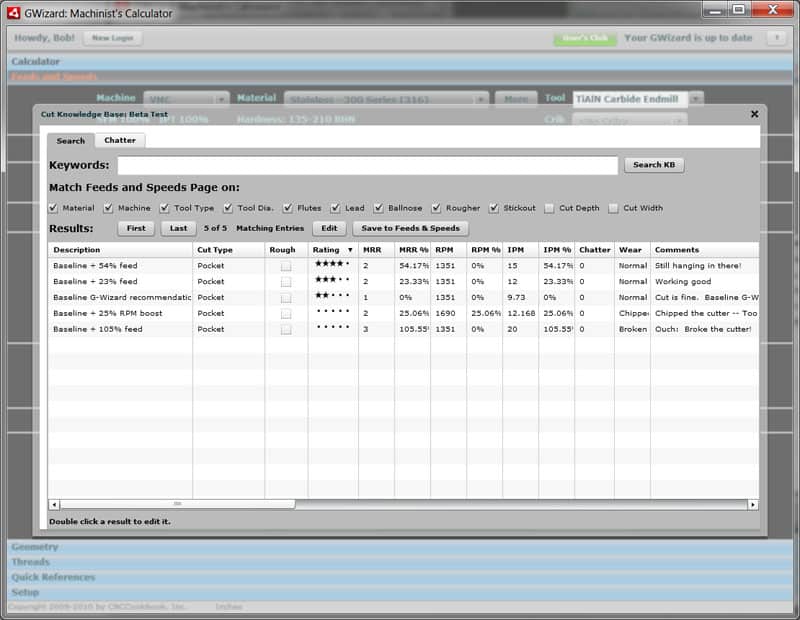 The Cut KB entries that match the Feeds and Speeds parameters…

G-Wizard goes out to the Cut KB and retrieves the entries that match based on any keywords you enter together with matching the values from feeds and speeds that are checked off in the check boxes. In this case, 5 cuts had been recorded in the KB for us to consider. Clicking the rating column lets us rank them by star ratings. The best cut achieved an MRR 54% better than the G-Wizard recommendation and was achieved by bumping up the feedrate 54%. You can see there were two failed experiments shown at the bottom of the list (no stars!) as well. In one case, bumping the rpm’s resulted in a chipped cutter. In the other we went too far with the feedrate and broke the cutter.

Note, these numbers are simulated. You have to do real experiments on your machine or there are just too many variables that are unknown. That’s the power of the Cut KB–it’s all about helping you control more variables to achieve greater cutting performance.

Editing or deleting a record couldn’t be easier. Just double click any record visible in the search results and the edit box pops up. There is a delete button there to get rid of unwanted results.

What Can I Do With a Cut KB?

We’ll be publishing some “How-To” guides for getting the most value from your Cut KB. Here are the articles about using the Cut KB that have been published so far:

Remember, the Cut KB is only as valuable as the data you have in it. Be sure to get started recording your cuts and you’ll be using soon to achieve more optimum cutting performance.

Chatter Control for the Rest of Us: Great MMSOnline article on how to use Cut KB info to overcome chatter.

Uncover Peak Performance in HSM: Another article on chatter and a Cut KB.

High Speed Machining of Aluminum: This is how Boeing uses a Cut KB and other tools for maximum productivity.

Have you tried G-Wizard’s Geometry Calculators yet?