I’ve always had a great interest in Astronomy, and I read with great interest recent articles about the Antikythera Mechanism, which was apparently an ancient orrery or simulator of motions of the heavenly bodies. The machine, which was constructed circa 80 BC, could represent the motions of most heavenly bodies known in its time using a clockwork consisting of 37 gears. 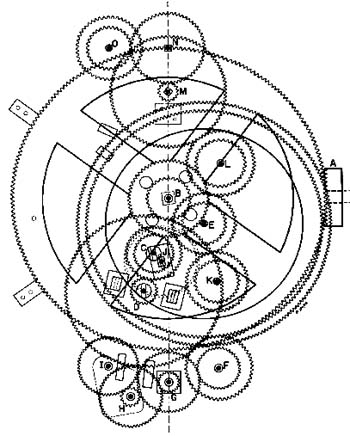 Differential Gear Mechanism Was Way Ahead of Its Time.

The front dial would show the progression of the Sun and Moon through the Zodiac according to the ancient Egyptian calendar. The lower back dial gives the Metonic cycle, the Synodic cycle, and the Lunar
year of 12 Synodic months. Later researchers determined that the device could show the motion of the visible planets through the Zodiac, as well as predict Solar and Lunar eclipses using the Saros scale. It also displayed
the Calippic scale. 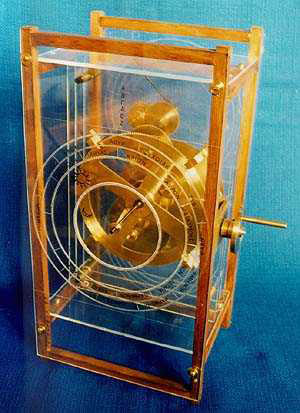 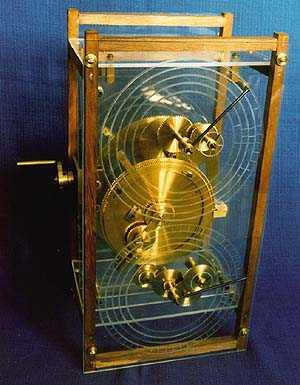 Front and Back of a Reconstructed Model of the Antykthera Mechanism 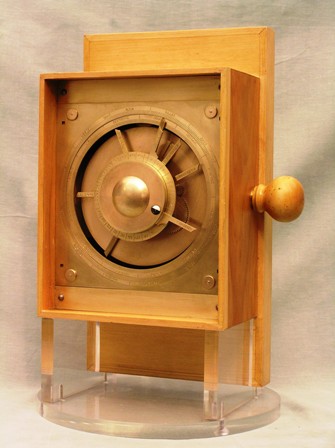 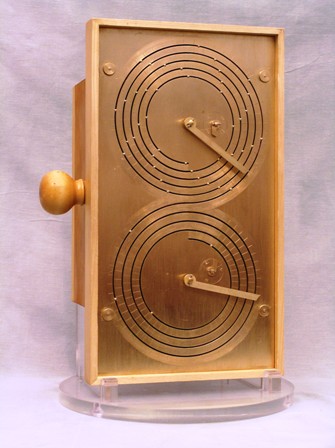 This Model May Be Closer. Note the Spiral Tracks on the Back Dials 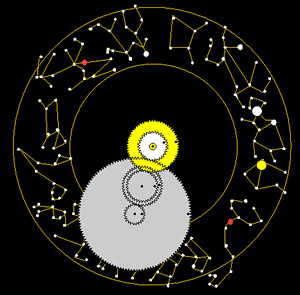 The Sun and Moon Dials Tracking Against the Zodiac…

My Own Astronomical Clock Design: Bobtikythera

After reading some about the Antikythera Mechanism, I was inspired and got interested in designing an astronomical clock of
my own. I don’t know if I will ever finish the design, let alone build it, but it is an interesting and challenging exercise. I’m learning a lot about clockwork, as well as refreshing some old memories about astronomy and learning for the first time more about how the Ancients dealt with heavenly bodies. Fascinating stuff!

Let’s consider the ratios needed to produce the outputs. We will assume the input crank is 1 Egyptian calendar day each revolution:

Here is a schematic that I use to represent the inter-relationship between the various gears or wheels in the Mechanism I’m designing. I think it simplifies the understanding of how it would work: 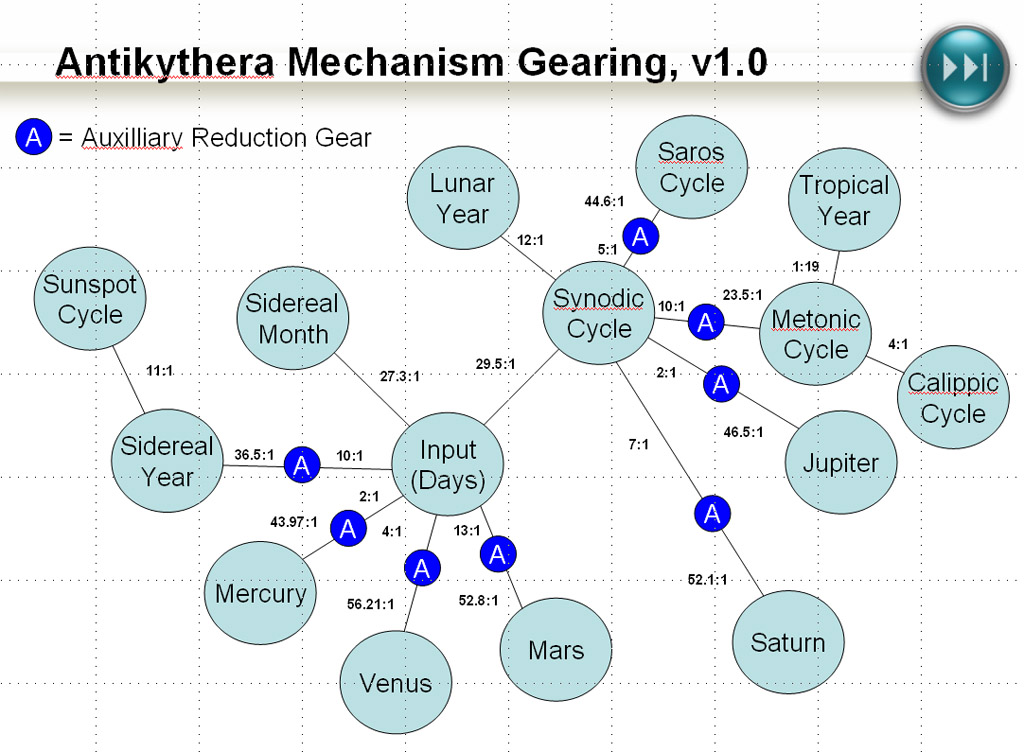 Each of the light blue circles represents a major gear and dial in the system. In other words, it is both a gear that others may engage as well as an output of some kind. For example, the Synodic Cycle is a dial showing the lunar phases as well as an important gear that is driven through a 29.5:1 ratio from the input shaft and goes on to drive7 subsequent major gear/dials and 4 auxilliary reduction gears.

The dark blue circles represent what I’m calling auxilliary reduction gears. In my more detailed design, I estimated
the diameter of each gear in the system given a 20 tooth per inch gear pitch. Based on that estimate, I added auxilliary gearing to keep the largest gears from exceeding much more than 8″ in diameter. The largest gear/dial is that governing the motion of Mars through the Zodiac at 8.4″. The smallest gear/dials (doesn’t count the aux reduction gears) have 10 teeth each and correspond to the Input in days and the Tropical Year.

To work out the details of the geartrain, I designed an Excel spreadsheet that tracked the following for each gear/dial:

– Ratio: What is the ultimate reduction ratio we want to achieve from the input?

– Auxilliary Gear Ratio: The reduction ratio of any auxilliary gear that may be present. This ratio was hand tuned to keep gear diameters to 8″ or so and also to minimize the potential errors if the ratios dictated something other than an integer number of teeth.

– Teeth: The number of teeth around the circumference of the gear to achieve the desired ratio from the input.

– Circumference: Given the number of teeth divided by 20 teeth per inch pitch, what would be the circumference of this gear?

– Tooth Error: For gears that did not have an exact number of teeth due to the ratios (e.g. Mercury gear had 439.71 teeth), what would be the positioning error in inches? Simply divide the portion of the fractional number of teeth closest to the next integer number by 20 teeth per inch to arrive a the maximum error in the dial. Most dials wound up with less than 0.001″ error, except for Mercury, which had right at 0.001″. Given backlash and the likely precision with which the mechanism can be made, I judge that 0.001″ or less error will be inconsequential to the accuracy of the mechanism.

– Purpose: What is the dial used for or what does it represent?

– Calibration: How will the dial be calibrated? For example,  the Metonic Cycle dial will be graduated into 19 divisions, each representing a normal year.

Here are the details I came up with:

Next, I tried laying out some of the gears using Rhino 3D, just to get an idea of how things might fit together. This was my
first attempt at a layout for the gears needed to drive the inner planets. It’s everything in the gear schematic above that’s tied directly to the input wheel except for the synodic wheel. 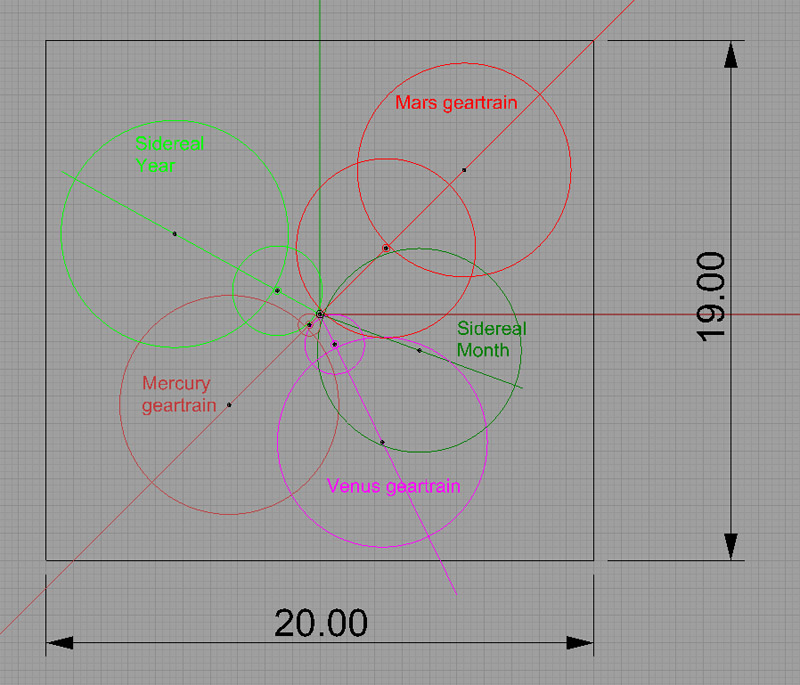 A first attempt at gear layout in Rhino. The exact center is the Input Gear, and the various other gear trains are color coded. I’m thinking I’ll want something a little more compact!

I also sketched out an orrery hub mechanism in Rhino to see how that might work: 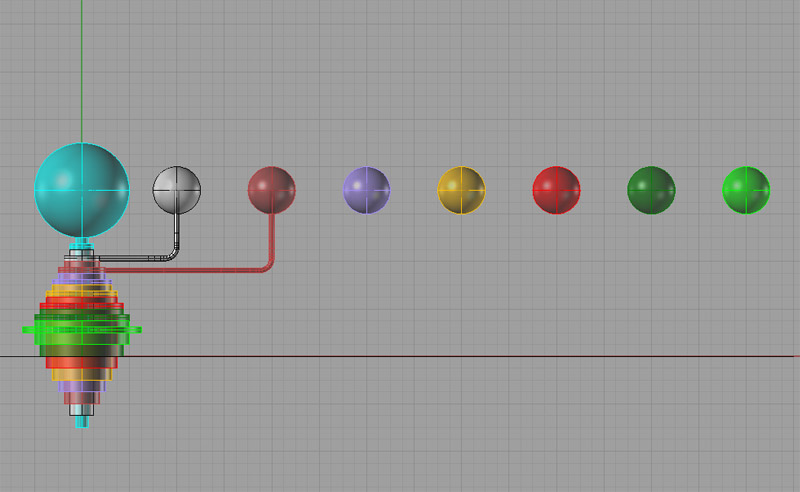 Orrery front view. That’s Earth in the center, Moon, Mercury, Venus, Sun, Mars, Jupiter, and Saturn. That is the order the Ptolemaic universe worked in… 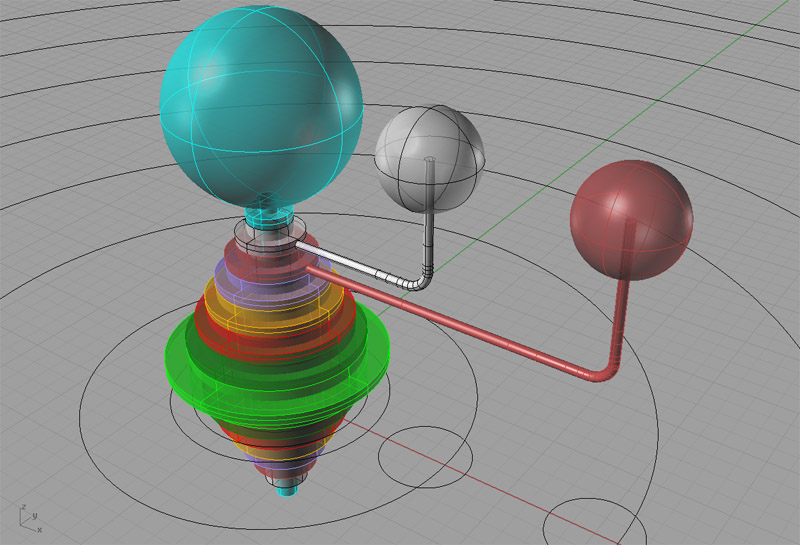 A closer perspective view of the Orrery mechanism…

This orrery piece presents some real design issues. The drawing shows the heavenly bodies in the Ptolemaic perspective, with Earth at the center and all the other bodies revolving around it. As you recall, refuting this view is one of the things that put Gallileo (and others) in hot water with the Church.

The Ptolemaic perspective is more in keeping with the feel I’d like to have for the clock, which is a lot more astrological
and Ancient-looking than a more modern orrery. Frankly, I’d like to do both at some point and have them sit next to one another. The problem is that the planets display retrograde motion. In other words, at certain times of the year, their apparent motion against the stars reverses for a time and the planet “backs up”. This happens as planets lap each other around the sun. In the Ancient view, this was accounted for by having the planets travel in little sub-circles called “epicycles” as they made their circuit around the big circle. You can imagine that this would make for complex motion to simulate with clockwork!

The easier way out is to have the orrery display the modern view, with Sun at center and planets circling around
it. To determine where a planet appears in the Zodiac would require sighting along the line from the Earth to the planet and extending that line into the zodiac. Not quite so elegant, although physically more realistic and also easier to construct a clockwork for. 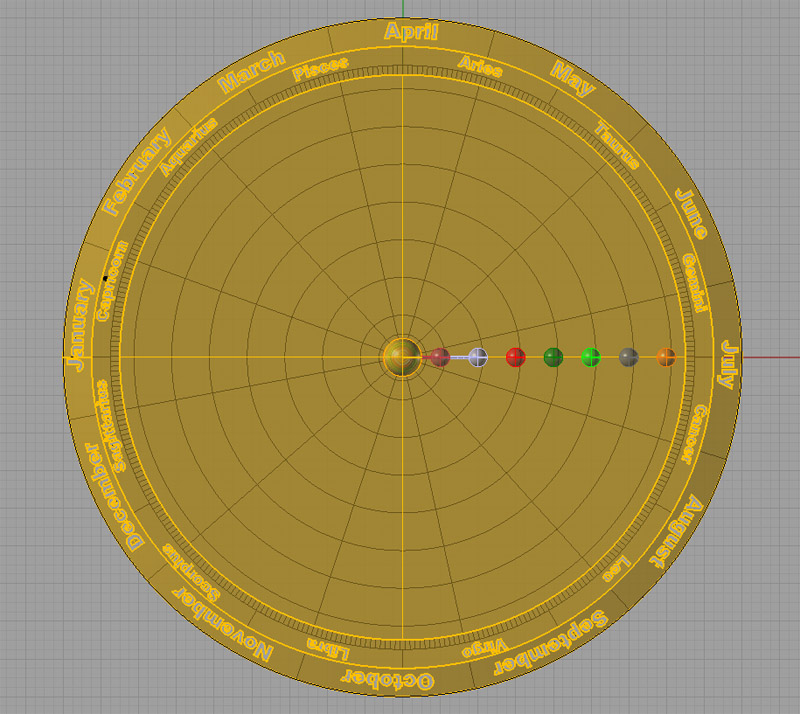 A rendering of the baseplate for the orrery… 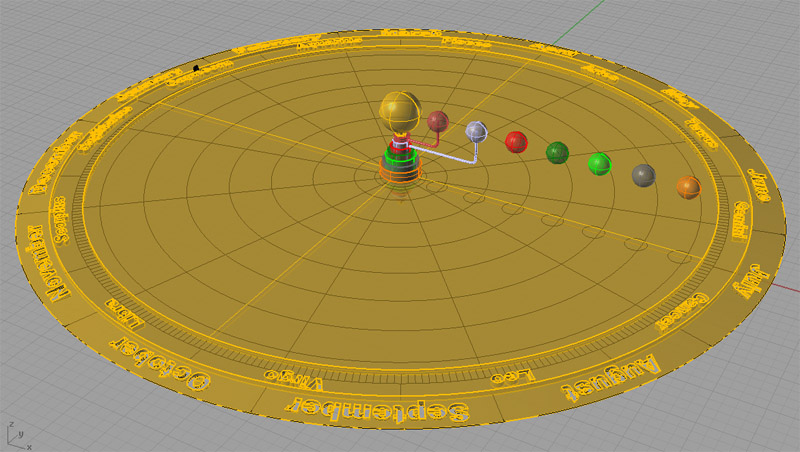 A little extra explanation of some of these cycle sand why they are important.

– Metonic Cycle: Every 19.0 tropical years ( or 235 synodic months) from the precise date of full/new Moon, another full/new Moon occurs at approximately the same degree of the ecliptic and about the same date. the ancient Greeks called 19 the golden number as the same lunar phase repeates on the same date every 19.0 years.

– Ancient Egyptian Calendar: Also called a “wandering calendar” because it consists of 365 days and ignores leap years,
hence it shifts one day in every four years. The Egyptian calendar day starts at sunrise and noon is defined as 6 diurnal hours later. Sunset occurs 12 diurnal hours after sunrise and midnight is 6 nocturnal hours later. The length of the hours depends on the observer’s latitude as well as the season. Ptolemy adopted hours of equal length, known s equinoctial hours, and shift the epoch from sunrise to mean local noon (6 hours) at the meridian of Alexandria. Sunrise, measured in these hours, will on
average occur 6 hours earlier and sunset 6 equal hours later (on average), but the exact value depends on the season.

– Zig Zag Functions: A unique technique developed by the Seleucian Babylonians to deal with the irregular motions of planets through the Zodiac.

Cycles not tracked by the original Antikythera Mechanism, but that would be interesting and straightforward to recreate.

– Sunspot Cycle: The sun goes through an 11 year cycle of sunspot minima to maxima. The last high was in 2001, so the next one will be 2012. It would not be hard to add a dial tracking the cycle, although the ancients had no idea there
was such a cycle. Gallileo discovered sunspots, but it wasn’t until 1843 that an amateur astronomer named Heinrich Schwabe discovered the 11 year cycle.

– Birthdays, Anniversaries, and Important Dates: A single revolution of the Calippic Cycle, the longest duration cycle tracked by
this device, corresponds to 76 years. Given a “starting date” of 1900, each revolution of the Calippic cycle will take us from 1900 to 1976 (the United States Bicentennial) to 2052 to 2128. So 4 revolutions is enough to record anyone living’s birthdate and then some. Wouldn’t it be interesting to turn the crank and see the configuration of the stars on the day you were born and every birthday thereafter?

Details of the Antikythera Mechanism’s Construction

The Wheels of Greek Astronomers: Excellent description of the Antikythera Mechanism.

Models of Planetary Motion from Antiquity to Renaissance

Many different kinds of months defined

Babylonian Astronomy: Good info on how the Babylonians figured cycles for planets and such.