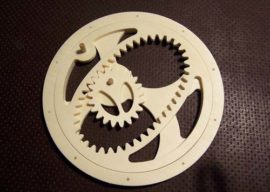 This is a guest blog post by Art Fenerty, father of Mach3 and now the Gearotic Motion software.  I asked Art to tell us in his own words what was really great about Gearotic Motion and that’s what he’s done.  If it sounds interesting, please check out the various deals we’re offering on Gearotic Motion. Hi, my name is Art Fenerty, and Bob (your host here) has asked me to introduce Gearotic Motion to you and will be offering it here from this site. Its Bob’s thought that an introduction may help explain what Gearotic is all about and give you an idea as to my background.

Some of you may have heard of me if you have used Mach3 CNC software as Im the original author of that package. Ive been involved in CNC software since myself and a friend built a strange looking CNC contraption in my basement about 10 years back. It blew up almost immediately, but after much tinkering we had a machine that could move a wood router around a table.

At that point we discovered that software for such a beast was near impossible to find. So I wrote what ended up being called Mach3. Mach3 helped to revolutionize home CNC builds. Its inexpensive and easy to use interface allowed the hobby to grow very quickly and now has over 40,000 users worldwide. I sold the company about 4 years ago and began looking for other interests to educate myself further in CNC. After writing a few programs as general utilities I began to build a wooden clock. I found this facinating but also found doing it to be difficult as I had to draw information from too many sources. The clock worked fine, and it occured to me that others could use help in making such things. From there Gearotic Motion was designed to be a quick utility to make gears with. At least that was the plan.

Turns out there were a lot of people with requests for easy gears of various types. So elliptical gears, epicycloidic gears, helicals, timing pulleys and such were all added at user request over the last year or more. Then, being as its original intent was clockmaking, escapements were added, both English type and Grasshopper type. Being that over the years Ive added a CNC router, Mill, CO2 laser cutter and CNC lathe, more features were added so that the output of Gearotic motion is usefull to woodworkers who can cut from a paper pattern, or machinists with 2.5D mills ( Gcode), or even 4th axis gear cutting. 3d models are output for 3d printers, dxf’s for people who simply want cad files for further processing or GCode for immediate cutting on routers or mills.

There are plenty of video’s available showing how to use the program as well as a help file to explain some of the terminology used. Gearotic can at this point allow you to drag and drop various gears on your screen, simulate their rotation and show ratio information and such.. add pendulums and escapements if your making a clock, or various gear types if making a transmission. It can even design a tabbed box with shaft bearing holes to hold your device. Ive had a lot of fun designing and building it and I suspect those who try it will find it as addictive as many others have.

As in all software Ive written for the CNC community I follow the “one-license” rule. Once purchased, all updates in the future are free, and the cost is kept to a hobby level, so even though its capabilities rival (or exceed) software costing hundreds of dollars, GM’s price is kept low so as to encourage all people who see it to design something of their own. Its main idea’s are simple, take a complex subject like building a geared mechanism, and make it easy enough a user will surprise themselves with how well they do. Its tag line is “For the designer in all of us.” and Ive found from a great many testimonials that users tend to find a great deal of satification when they build something that moves and the “damn thing works.”. I hope any of you that try it find that same sense of satisfaction. Its what the hobby is all about.