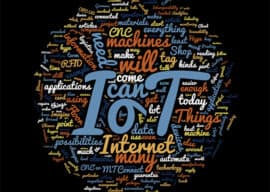 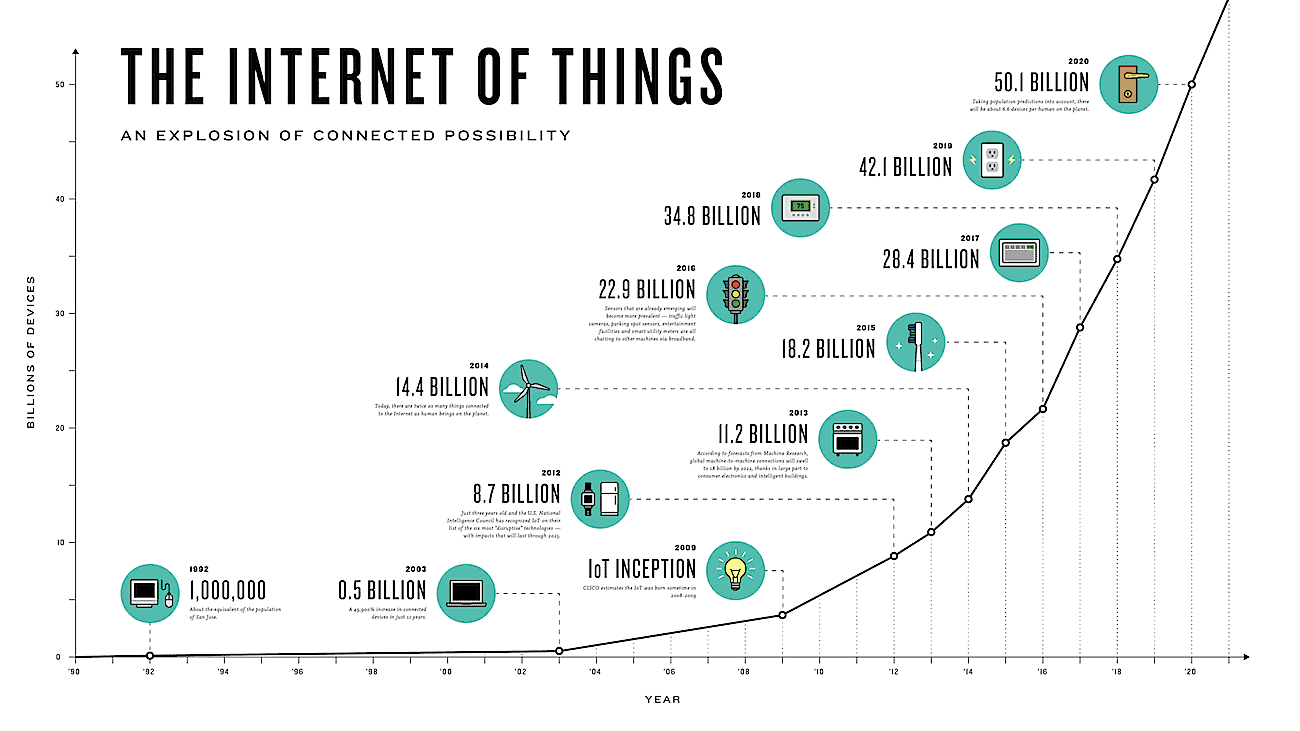 The explosion of “Things” connected to the Internet…

By now you must have heard at least some of the hype surrounding IoT—The Internet of Things.  If nothing else, Gartner tells us it is at the top of the 2015 Hype Cycle, LOL.  It is trailing Consumer 3D Printing, which is just starting to fall off the hype cycle and enter the “Trough of Disillusionment” and Enterprise 3D Printing which is even further along and is steadily climbing the “Slope of Enlightenment” to get to the “Plateau of Productivity”, which is where the cycle ends.  In other words, now is the perfect time to make sure you know at least enough about IoT to sound knowledgeable when talking to colleagues.  You want a quick Cheat Sheet to get you jump started, right?  Read on, dear CNC’er, read on, because that’s exactly what we have here.

What is the Internet of Things?

I like the simple definition Forbes uses the best:

Simply put this is the concept of basically connecting any device with an on and off switch to the Internet (and/or to each other). This includes everything from cell phones, coffee makers, washing machines, headphones, lamps, wearable devices and almost anything else you can think of. This also applies to components of machines, for example a jet engine of an airplane or the drill of an oil rig.

Let’s translate that to CNC’er terms.  What kinds of things might we expect to see connected to the Internet?  Here are some possibilities:

For manufacturers, perhaps we can extend the IoT a bit further to include things that can be effectively tagged so that reading the tag tells interested parties on the Internet something about what was tagged.  Tags could be barcodes or RFID, and the possibilities for what to tag open up even more areas to explore:

Tagging is a valid way to extend IoT–the term was invented by an RFID (RF ID) tag company, after all.

Another not obvious way a thing can be part of the IoT is via mobile devices.  Many companies are using specialized tablet and phones apps to log information from operators to the Internet applications that need the information.  Yes, it’s a manual process that would be great to automate, but at least the information can be conveniently gathered with a single data entry operation and then shared.

Why Connect All These Things to the Internet?

If you’ve ever been involved with a manufacturing situation that required traceability, IoT will make a lot of sense because it makes it easier to automate.  Traceability is the ability to document the history, location, or application of an item.  For example, a particular part may need to guarantee that it is strong enough for the application.  As a result, they may require the materials used to make the part have traceability.  Can’t be making aerospace fasteners out of cheaper grades of steel, for example.  IoT in this application would be all about making it easier to trace all these things.  Raw materials and supplies would come in with a tag certifying the contents.  This obligates the supplier to stand by and guarantee the materials are as claimed.

Many companies put people into the IoT using access cards that have embedded RFID tags.  To enter a building or secure space within the building, you wave the card at a card reader and the door or gate unlocks.  One can imagine a not too distant future where you CNC machine won’t operate for you without such an unlock so that access can be limited to those that are trained and authorized to use a particular machine.

In warehouse situations as well as logistics and transport, IoT makes it easier to keep track of where everything is.

These kinds of applications are mundane and reasonably prevalent today.  We’re used to carding in and out of buildings (at least at some companies) and certainly to the many logistics and supply chain applications even if we’re not directly using bar codes on our shop floors today. But down the road, as the technology to tag objects gets cheaper and cheaper, many more applications will emerge.

Imagine many of the typical Lean Manufacturing exercises being augmented by plentiful data captured using IoT technologies.  What was actually happening on the Shop Floor would be so much more obvious.  It would be possible to analyze the data to find patterns of waste in order to come up with suggestions to test for improvement.

Imagine if every inspection device right down to your calipers and micrometers had an IoT connection.  You could not only greatly improve and automate Shop Floor operations, but you would have long term data sets that could be analyzed for a great deal of useful information.  If nothing else, the machines, devices, operators, and practices associated with greater error rates would be more obvious and work could be focused on improvements in those areas.

Preventative Maintenance can be so much more effective with a bevy of IoT sensors monitoring everything from spindle vibration to servo faults to coolant mix.  Imagine getting a text message as you card in and walk in the door telling you it’s time to add water to the third VMC from the left on the Shop Floor and Way Oil to the fourth?

Just consider what a mess Tool Data is for many shops.  Keeping straight what’s in inventory, what’s on the machines, what does each job need, how long will each tool last, what are the best feeds and speeds, and a whole lot else is problematic and mostly seat of the pants.  With IoT, it can be monitored, automated, and optimized. 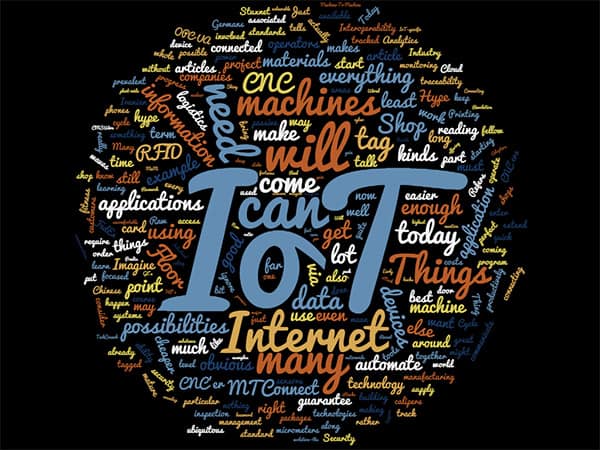 OK, you’ve got some idea what the IoT is and you’re ready to talk animatedly over beers with fellow CNC’ers about it.  You’ll still need a quick cheat sheet of related buzzwords that may come up in the conversation.  I’ve included links to other articles you might go to in order to learn more about each term.  Here you go:

When Will IoT Be Here for Real?

The Internet of Things is coming, the promise is too good to ignore, but we’re at an uncomfortable point in its evolution–the peak of the Hype Cycle.  That is the point when the ratio of hype to substance is highest.  It’s the point where Early Adopters and those who want to stake their fortunes on the Shiny New Thing are really the best customers for the technology.  These customers have so much to gain that they can ignore all the pain associated with the fact that the technology is far from mature and actually quite incomplete.  There is a lot of ground to cover before IoT will be something every CNC’er needs contact with to be successful, and it will come in many waves over the course of years.  By “waves” I mean it will take hold in niches before it becomes ubiquitous throughout the shop.

Today, IoT is pretty darned ubiquitous in the Supply Chain.  We can track the progress of packages coming and going because of these technologies.  Relatively few logistics providers such as FedEx had to automate to offer this kind of service.  Even so, there are many operators shipping packages to big for the likes of FedEx or UPS that don’t have this level of sophistication.  Perhaps the next leg to mature will be machine monitoring.  Most newer industrial CNC machines can communicate their status via standards such as MTConnect and many shops, especially Top Shops, are productively using this information.  Inspection can’t be far behind and there are systems available today to facilitate the management of tooling.

That’s all fine and well, but it is evolutionary, not revolutionary.  IoT promises to be a revolution, but to do so, some basic problems need to be resolved:

We could probably go on with factors that need to change before IoT can truly explode into prominence with the mainstream, but those will do.

What Should I Be Doing About IoT Today?

You’ve taken the first step reading this article–be aware of what IoT is and start educating yourself.  The period of Maximum Hype is a perfect time to be learning rather than implementing unless you really need what IoT offers today.  You’ll get in before there are so many options and so many re-invented wheels that it is too confusing.  Learn the basics now and then keep yourself up to speed by reading the articles that come your way.

Second, start Blue-Sky thinking about the possibilities.  IoT takes a bit of imagination to wrap your head around.  Kick ideas around with fellow CNC’ers.  Start imagining applications that will matter for your CNC work.

Third, be on the lookout for an IoT project that will benefit you.  As you learn and discuss possibilities, eventually you’ll realize you’re not far from being able to implement one of the possibilities.  It doesn’t have to come today, but it will come along sooner than later.  A pilot project will maximize your learning and let you get your feet wet without too much risk.