What Do the Top Shops Do Differently From Most Other Shops? 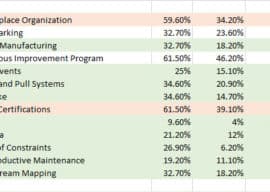 I love learning about the Best Practices of most any industry because I want to know what put the Top Dogs at the Top?

There’s an audience that wants to believe they just got lucky and that they’re no better than anyone else, and there are elements of truth to that–to be really successful does require some luck.  But what I’ve found as an entrepreneur who has helped build 8 businesses so far, is that most of the time the Top Dogs did things a little differently.  The real trick is in understanding exactly which of those things really mattered.

I just went over the results of Modern Machine Shops annual Top Shops benchmarking survey.  Kudos to these guys for doing this work–they’ve unearthed a wealth of useful information about various shops and tried to analyze what the major trends are that set the Top Shops apart from the rest.  I will leave it to you to read their conclusions.  What I want to do here is present my own analysis of their data, which has a little bit different spin.  As I mentioned, the real trick is in understanding which things Top Shops do differently matter.  I do a lot of number crunching in spreadsheets, and have even developed specialized calculation software for specific difficult number crunching problems.  What you have to do is come up with an algorithm to separate the signal from all the noise.  In this case, what I was interested in understanding is what the majority of Top Shops were doing that the majority of Other Shops don’t.  So there were two criteria:

Sounds simple, but the results were interesting and present some different conclusions than MMS gave in their write up, so let’s dig in.

For that audience that wants to believe the Top Shops got lucky, better think again.  It’s easy to sit back and assume they’re just bigger shops, or they just lucked into better contracts.  All the data about how they run their businesses would be just noise if this were the case.  But, the data says otherwise:

The point is, your shop has the makings of a Top Shop, they’re just running their businesses a little differently.  And what a difference it makes:

Like they say, it’s hard to argue with success.  Let’s try digging into what they’re doing differently.

Remember, we’re sticking to things the majority of top shops do that relatively few Other Shops do, so more than half the Top Shops have these advantages over their competitors.  It’s not that hard to pick up some Fourth Axis capability, maybe it’s time you had a look into it?

Our G-Wizard Feeds and Speeds Calculator will show you graphically how much High Pressure Coolant and Through Spindle Coolant can increase your throughput.  Use G-Wizard as a simulator to see what these options could do in your shop.

Top Shops are 50% more likely to do Tool Inventory Management.  It’s tough to manage something if you have no idea what’s going on with it.  Tooling is a big investment for shops.  What do the Top Shops get out of all Tool Inventory Management?  If you look at tthe % they spend on tooling, they were able to bring it down from 5% at Other Shops to 3%.  That’s a whopping 24% savings that goes straight to the bottom line.  You gotta figure it won’t take long for that kind of investment to pay for itself.

Only one thing jumps out enough here–Multiple Workpiece Fixturing.  Yes, the Top Shops are more likely to have the toys–Pallet Changers and Quick Change Devices, but they’re not enough more likely.  The only other thing that was even close was Quick Change Devices–presumably fixture plates are the biggest example.  But, 80.8% of Top Shops have Multiple Workpiece Fixturing which made them 50% more likely to have it than Other Shops.  Presumably you just have to get beyond using a milling vise to reap this advantage.

Check out the Fixture Calculator in our G-Wizard Estimator to get an idea what kind of advantage this could mean for you on a particular job.  And remember–with low volume high mix jobs, you have to be careful when and where you invest in Fixturing so it pays off.  The Fixture Calculator is tailor-made to help solve that problem.

I suspect that Low Volume world we live in accounts for some of the lack of excitement in this category.

Everybody has CAD, everybody has CAM, yeah, Top Shops have ERP but so do a lot of Other Shops.  As a CNC Software provider, I love this category, but frankly, so many shops have software, it’s become a must have situation.  If you don’t have one of the categories, you’re at a signficant disadvantage.  The competitive axis here is on how well your software is working for you.  We offer software in the Toolpath Simulation and Job Estimating categories.  Here’s what the MMS Survey had to say about those:

On the topic of Job Estimation, there was one statistic that really jumped out for me:  Top Shops win fewer quotes than Other Shops!

Top Shops are winning 53% of the jobs they bid while Other Shops win 65%.  That tells me the Other Shops are bidding low to get the business while the Top Shops are better at getting higher margin business.  To get the cream off the top you need a tool like a Job Estimator to be able to manage your quotation process closely enough so you know just where to price your bid.  I suspect the Top Shops that didn’t indicate they had the software had a sophisticated home grown solution based on spreadsheets or similar tools that gives them this advantage.

We skipped the category of Inspection–not enough action there.  Ancillary Machining Equipment is a hotbed with two big standouts:

Honorable mention goes to Machine Condition Monitoring.  Once that machine is on the Ethernet, you can do more than just ship gcode around.  Only 25% of Top Shops are using Machine Condition Monitoring so far, but this is a whopping 168% more likely in Top Shops than Other Shops.  It doesn’t take a lot to get your machines networked, and it opens a lot of doors for future opportunity once you’ve done so.

Much as we would all like to buy some shiny silver bullet technology or gadget, often it is process that wins the day.  Working Smarter is so much more effective than just Working Harder.  The Top Shops rang the bell in almost every process area.  In fact, I want to give you my spreadsheet numbers right here:

The Top Shops are beating the Other Shops by more than 50% in almost every category except Benchmarking (because not enough more Top Shops do it than Other Shops) and Continous Improvement (because enough Other Shops are already doing this one).  The two biggest standouts are that over half the Top Shops have a 5S initiative and a Quality Certification such as ISO.  If you don’t already have those two, I would get them underway ASAP.

The next most popular among the Top Shops are Cellular Manufacturing, Kanban, Poka Yoke, and Value Stream Mapping.  We’ve covered almost all of these in our Lean Manufacturing Series if you want to get a quick intro to any of them.

Of all the categories in the MMS Survey, this is the one that really leaped out as showing what the Top Shops are doing differently.  It’s really worth thinking about it carefully.

It’s tough to be a Top Shop if you can’t sell to customers, so it makes sense to ask whether Top Shops market any differently than Other Shops.  Not surprisingly, of course they do!

This was another one like Process that had a lot of near misses, so here are my full results:

Some of the standouts for me were:

Top Shop employees are invested in the success of the business…

Top Shops are approaching how they pay their employees dramatically differently than Other Shops.  It’s not about the hourly rates–Top Shops pay the same or a little less.  It’s about giving the employee the incentive to care about making the business more successful and it’s also about getting the employee to feel like the business treats them well.  More benefits, but also benefits tied to the performance of the business such as a bonus or revenue sharing can really make the difference.  This one goes hand in hand with the process improvements.  As anyone who has been through Lean Manufacturing knows–everyone has to want to make it work or it won’t.

There’s a tremendous number of great opportunities here to learn from the Top Shops.  What they’re doing differently are things any shop can do–you just have to choose to do them.  Why not get started today, at least with some Process or Marketing initiative for your shop?