Results of our 2015 Feeds and Speeds Survey 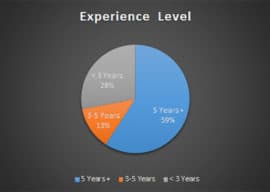 If you’ve been wondering how your peers approach Feeds and Speeds for their CNC work, wonder no longer.  Our survey was very popular and we got well over 100 responses.

First, a little background about the respondees.  On the whole, they were experienced professional CNC’ers: 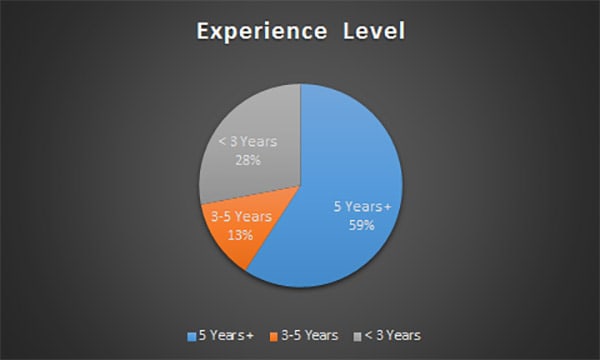 59% had more than 5 years of experience…

70% listed themselves as Professionals and 30% as Hobby CNC’ers.

How They Calculate Feeds and Speeds

Their methods of calculating Feeds and Speeds were many and varied: 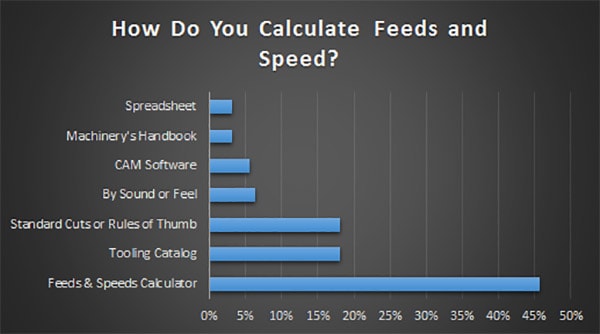 Methods for Calculating Feeds and Speeds…

By far the most common approach is to use a Feeds and Speeds Calculator such as our G-Wizard Calculator.  The second and third most popular methods are tied neck and neck–either use the Manufacturer’s Tooling Catalog or use Standard Rules of Thumb/Standard Cuts.  Very few use the other methods, and I can understand why:

There are a lot of reasons why Machinery’s Handbook and Tooling Catalogs are not such great ways to get your Feeds and Speeds and we’ve written about that before here.

Adjustments Made to Feeds and Speeds

Each of these “adjustments” requires some special calculations.  Some of them are quite extensive.  They also serve as a benchmark for which respondents are using the most advanced methods. 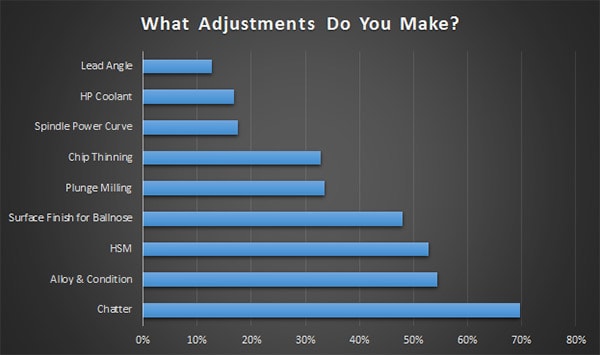 By far the most common thing people are attempting to adjust for is Chatter.  Did you know Chatter is a resonant phenomenon that can be methodically attacked and tamed?  The right way to deal with it is not just to dial down your Feeds and Speeds until it goes away.  Check out our special article on Chatter for more–it’s part of our free in-depth Feeds and Speeds Cookbook.  G-Wizard Calculator even includes a special “Chatter Pitch Calculator” that can help you assess the optimal spindle speeds to minimize chatter on your job.  It’s covered in our Chatter article, so do check it out if Chatter is ever a problem for you.

Adjusting for alloy and condition is the second most important adjustment.  You want to be sure you’ve got a big Material Database at hand to help with that.  We built one into G-Wizard for just that reason.

HSM is #3, followed by Ballnose Surface Finish (scallops!), Plunge Milling, Chip Thinning, and so on.  It’s interesting that so few people consider either their spindle power curve or chip thinning in their calculations.  You will encounter chip thinning any time the cut width is less than half the diameter of your tool, so way more than the 33% or so of folks are dealing with it, they’re just using the wrong feeds and speeds.  For the record, G-Wizard Calculator deals with every single thing listed.  Lead Angle is another great one–it makes a big difference and is even a factor when selecting what Face Mill to use for a particular application.  None of these are areas that can be helped by simple rules of thumb or by ear.

In fact, machinists who use advanced techniques like HSM, Plunge Milling, and High Pressure Coolant are about 30% more likely to use a Feeds and Speeds Calculator, and it was already the most popular choice for calculating your Feeds and Speeds.

What do you strive for when looking for the “Best” Feeds and Speeds?  Tool Life?  Material Removal Rate?  Surface Finish? 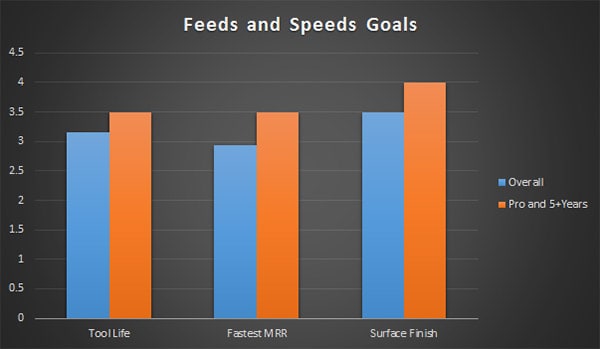 Surface Finish trumps all else.  For the whole group, Tool Life would be next most important, but for our group of experience pros, they put Tool Life and MRR on an equal footing–they want it all, in other words.

Biggest Challenges to Feeds and Speeds

We know from prior surveys that both Beginners and Pros consider Feeds and Speeds to be one of the more challenging aspects of CNC.  Between the prior link and this new survey, we can get a clearer picture about why: 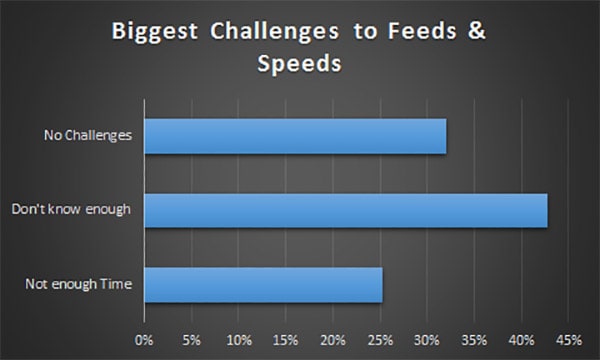 The number one answer was, “Don’t know enough to do all the calculations.”  For those that want to know more, check out that Feeds and Speeds Cookbook.  It delves into almost every facet from beginner to advanced.  It isn’t just about Feeds and Speeds either–there are a lot of valuable tips and techniques there as well.

How are Cut Depth and Cut Width Figured?

In many ways, we have the cart before the horse–the Cut Depth and Cut Width will determine what the range of allowable Feeds and Speeds are.  You’re defining the rules of the Feeds and Speeds Game, and ought to consider them carefully to make sure the game is played in your favor.  How do people go about it, then? 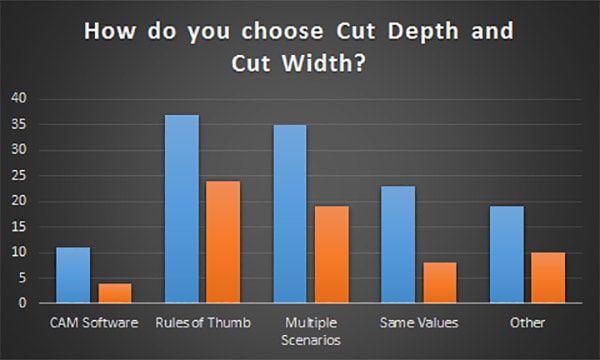 The most common answers were Rules of Thumb and Multiple Scenerios (trying a lot of combinations to find a good one).  In the “Other” category, basing it on either G-Wizard or rigidity (which is essentially what G-Wizard does) got 80%.  FWIW, G-Wizard offers 2 excellent tools for deciding your Cut Depth and Cut Width:

You can read more about those tools here.

How Do You Find Optimal Feeds and Speeds?

This is an interesting question which many punted: 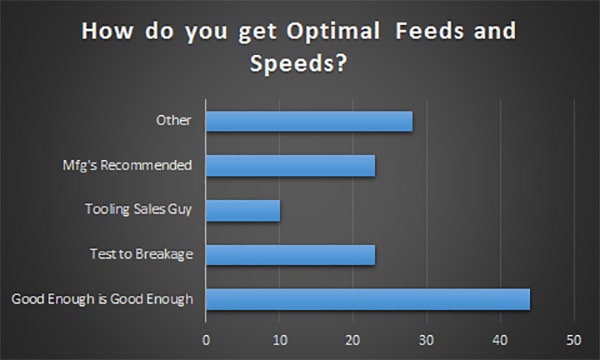 I say “punted” because the most popular answer was “Good Enough is Good Enough”–they didn’t try to optimize, they just went with their first answer.  This is not tremendously surprising given the High Mix/Low Volume world we live in.  It’s hard to do the old business of increasing Feeds and Speeds until something breaks and backing off when you’re not making many parts, though we still had that as the #3 most popular answer.  The #1 answer in the “Other” category was G-Wizard as a write-in, which was very gratifying.  I definitely hear from lots of shops who felt their Feeds and Speeds were much more optimal after adopting the product.  You can see that in some of the statistics they report back to us–56% longer tool life and 46% increase in cutting speed on average is pretty good!

Several were a little more detailed in the Other comment and told us they went with the best result on small lots and did more exhaustive testing on larger lots.  That’s a great way to do it.  But here’s another thing I’m not sure many realize–the results you get from any kind of testing can be systematically gathered up and used in future small lot jobs.  In fact, it’s all about knowing just what information to collect, how to apply it, and especially how to apply it to new jobs.  G-Wizard has a special Knowledge Based Machining “Cut KB” module for this purpose.

This one is perhaps a little ways afield from Feeds and Speed, but managing tooling data is a task we’re interested in here at CNCCookbook.  Coordinating the information between multiple CNC software applications is something we deal with ourselves, so we were curious. 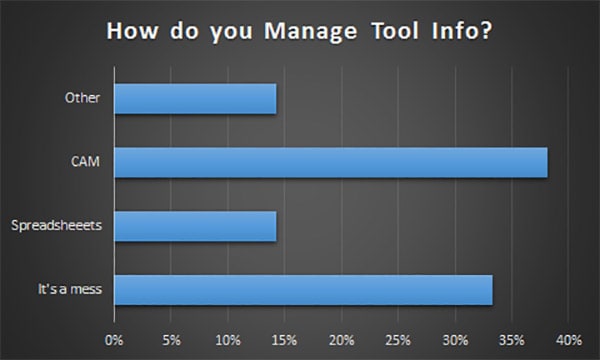 There’s no silver bullet here and the second largest category of responses declared it is simply, “A mess.”  The largest number rely on CAM to do the job and then things fall off considerably.  Half the remainder use spreadsheets and half use “Other”, which boils down to one of:

This survey has given us lots of great insights into a world that is near and dear to our hearts–Feeds and Speeds.  We’re gratified to see so many turning to Feeds and Speeds Calculators and a bit horrified to see how many have not.  We’re passionate about this and one of the charts that spoke most strongly to us was this one:

Each adjustment is something that requires a fair bit of calculation or effort.  There simply are no rules of thumb to deal with them.  And many of them come up so commonly that they need to be done for everyone’s Feeds and Speeds, yet clearly they aren’t.  Chip Thinning is a great example.  It comes into play each and every time you have a Cut Width less than half the diameter of your cutter.  If you fail to account for it, you’re running your cutter too slowly and your chip load may be much less than you think.  In the best case, you’re wasting time and money.  In the worst case, you may have reduced your actual chip load so much the cutter is rubbing and you’re radically affecting Tool Life.

Perhaps a little story is in order.  We got started doing our Feeds and Speeds with rules of thumb, a couple equations, and a scientific calculator, and walked away from that almost immediately.  It was apparent when you look to the origins of these things that they mostly came into being in the time of manual machining, and there is so much different about CNC machining (wonder why they’re so different, click here).

We graduated to spreadsheets to start capturing things like chip thinning.  That spreadsheet just kept getting bigger and fancier the more we learned.  Eventually, it became unmanageable, and we needed to do calculations that spreadsheets just are not very good at.  They don’t back solve equations very well, for example.  They are not good at what mathematicians call iterative solutions.  They’re not good at balancing and making tradeoffs in the interactions of many variables.  Plus, we kept on finding useful tips in the Tooling Manufacturer’s catalogs that were not really calculations.  They were more like rules:

You need to use parabolic flute drills when the depth to diameter ratio of the hole is more than 7:1.

We couldn’t figure out how we would ever remember hundreds of those rules plus master all the complex calculations that kept piling up.  That’s when we decided to build the G-Wizard Calculator.  To date, it keeps track of well over 50 variables and all their interactions and it includes several hundred rules like the parabolic flute rule that it dispenses in terms of what G-Wizard calls “Tips.”  It was so much faster, easier, and more accurate, that we had to share it with the world.  The rest is history.

Thanks to everyone who participated in the survey: we appreciate all your help and input!