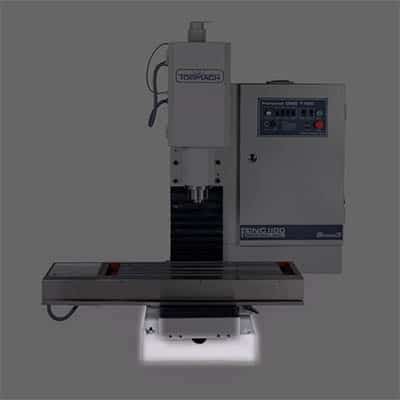 A CNC Milling Machine Frame supports the machine and provides rigidity to resist cutting forces. Typically, there is a base with a detachable column.  Here’s a few different frames to give an idea: 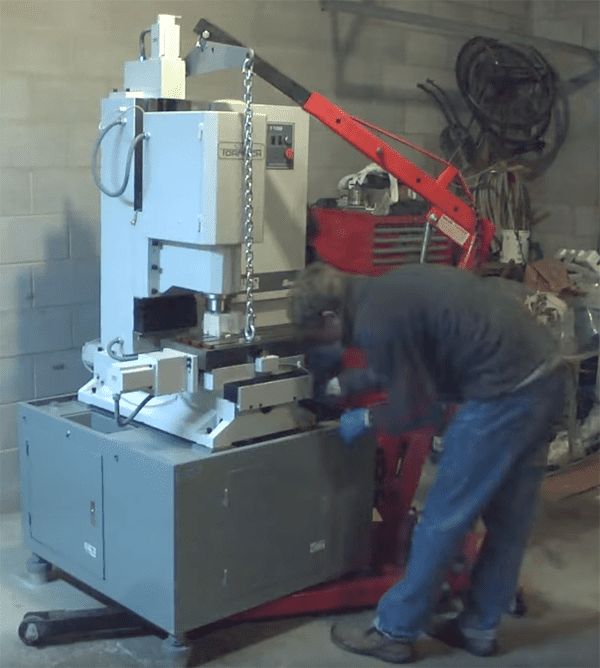 Here’s a Tormach frame, it’s a typical L-shape with a column bolted to the large base.  The base is lighter colored.  That’s a stand underneath it. 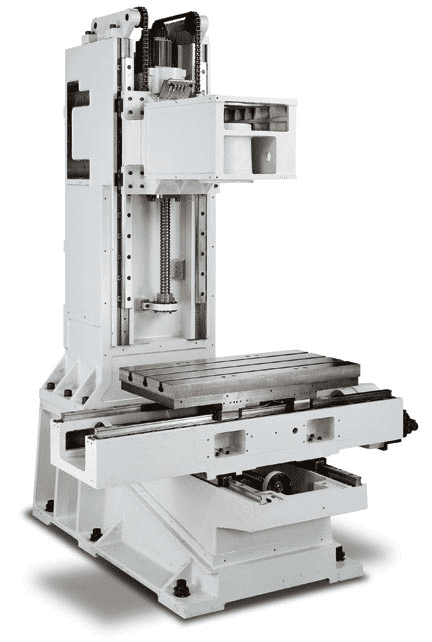 It’s not unlike the Tormach, it’s just radically beefier.  We’ve still got an L-shape with the column bolted to the base.

What About Knee Mills?

Most every machinist knows about Knee Mills. The iconic Bridgeport Mill is a fixture in many shops.

There was an era when CNC Knee Mills ruled, but it has passed.  The two frame designs shown above are similar, and they are not Knee Mills.  Instead, they’re what’s called “Bed Mills”.  To learn more about why Knee Mills are less suited to CNC (though you can still buy plenty of brand new CNC Knee Mills), read our article about Bridgeport Knee Mills.

DIY CNC Machine Frames are most commonly made of cast iron. Other possibilities include aluminum or weldments with epoxy granite fill.

The two key considerations in a machine frame are:

Cast Iron has excellent dampening and rigidity.  Steel, on the other hand, is quite stiff, but its damping is poor, so it is seldom used.  The exception would be when there is some other mechanism for damping than the sheer mass and material.  A great example would be steel weldments filled with epoxy granite.

Epoxy Granite is a mixture of epoxy resin and rocks of various sizes ranging from sand up to small pebbles.  What happens with vibration is there is friction in the surface area between the resin and the rocks.  The various sizes resist different frequencies of vibration to different extents.  Epoxy Granite is a wonderful damper, but it has little strength, so we use a welded steel container for the epoxy granite to provide strength.

Here’s a sketch I made of a possible steel weldment and epoxy granite frame for a CNC Router: 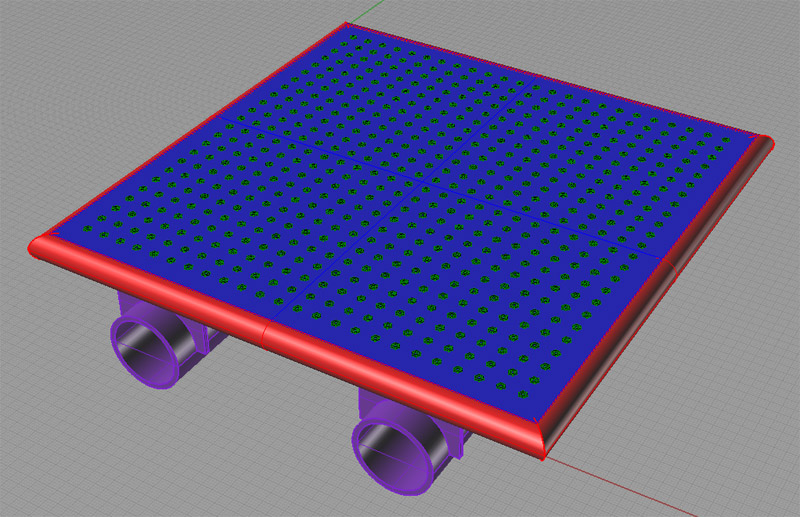 Aluminum is another material that’s often used in DIY Machine Frames, particularly when we talk about aluminum extrusions such as 8020 extrusions but also aluminum plate.  It is more desirable than steel from a damping standpoint and it also has the desirable property that it doesn’t need to be stress relieved.  Steel and Cast Iron have internal stresses that can cause the material to distort when machined.  With aluminum, you’ll have no such problems. 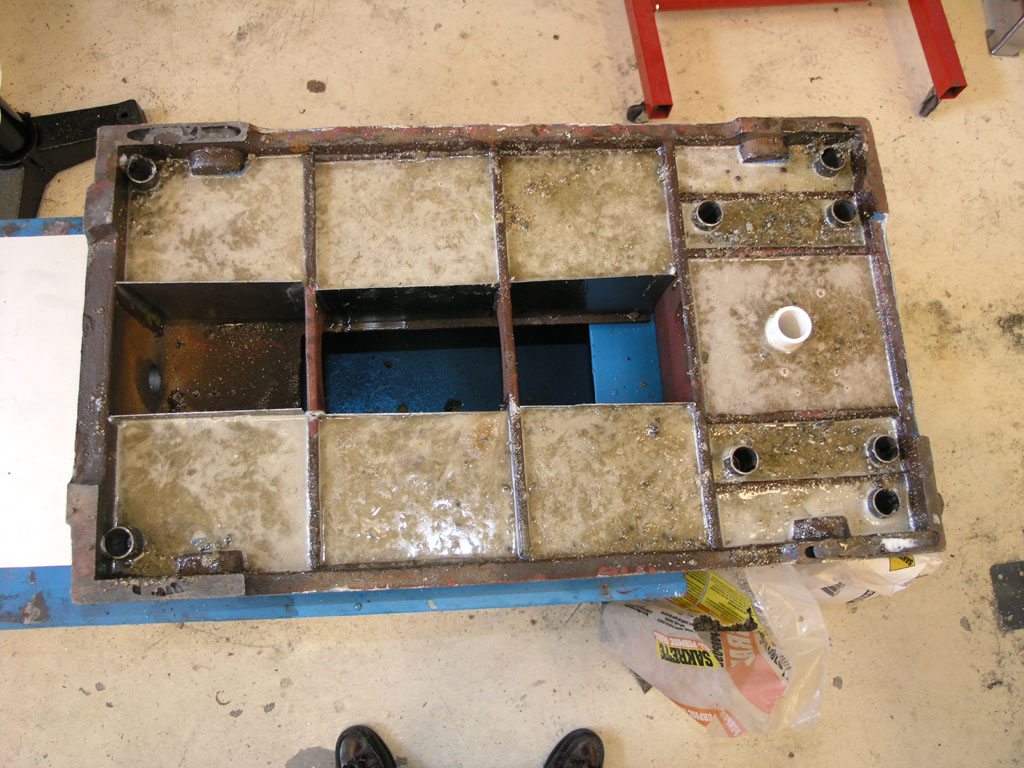 RF-45 milling machine base filled with Epoxy Granite for damping…

Effect of Frame on Machine Performance

Stiffness and Damping are important to CNC work.  If the machine frame bends too much when cutting forces are applied, it causes a lot of problems:

In the photos above, you can see just how beefy industrial VMC frames are.  DIY frames almost never reach those levels of rigidity and damping, so how well do those machines perform?

It turns out we can model their performance by looking at the amount of mass in the frame versus the machine’s work envelope versus the spindle horsepower.  The work envelope is the total volume the cutter can reach.  A relatively lightweight frame can be extremely accurate if it only has to deal with a small work envelope. Alternatively, if spindle power is low enough, it won’t be able to distort the frame as much.  These variables trade off.

Here’s a fascinating little machine that didn’t cost much to build and is extremely accurate: 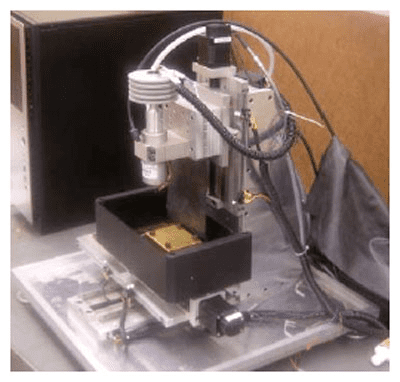 I’ve got an entire article about it, and if all you’re interested in is engraving hobo nickels, it would be a lot of fun.  On the other hand, most of us want a larger work envelope for our projects.

So what’s the trade-off?

I did this analysis of spindle power versus machine weight of commercial VMC’s: 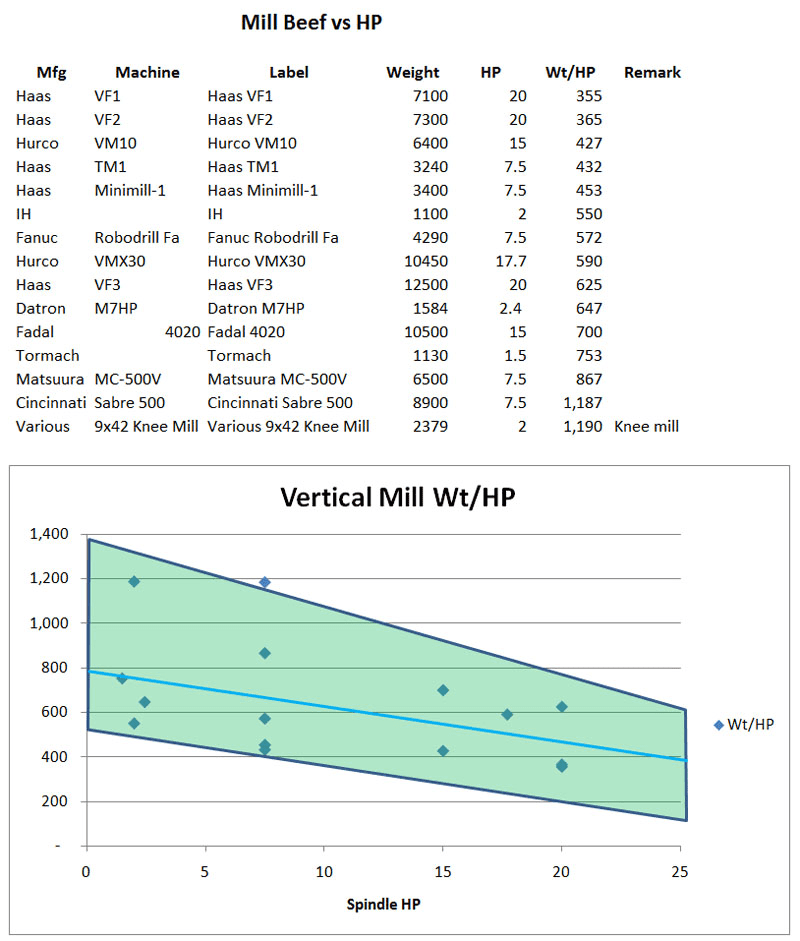 After further research, I was able to develop a feature for our G-Wizard Calculator that automatically de-rates your spindle horsepower (if needed) to the maximum your machine’s frame can handle and still be in the low end of VMC rigidity.  It’s pretty slick and has been especially useful for folks with machines that have rigidity problems.  I’ve had customers tell me their machines basically went from being maddeningly inconsistent to tame to suddenly being easy to use.

You might find the calculator is also helpful in determine how much frame you need or conversely, how powerful a spindle you can fit on your frame before it’s too much.

It’s hard for a DIY CNC’er to build a rigid and well-dampened frame from scratch.  Think about it.  Are you in a position to create heavy cast iron frames?  Do you have access to a foundry that can pour the molten cast iron?  Can you weight a year or so while your castings season and release internal stresses?

Most will say they can’t deal with any of that.  This leaves a few other approaches available–they can try a fabrication technique that will work, or they can cannibalize the frame of a donor manual milling machine.  The latter is by far the most common approach, although we do see folks having a go with aluminum.  I have yet to see someone try the steel weldment and epoxy granite approach, but personally I think that’s the one most likely to produce a high performance CNC machine from scratch.

Building a frame like that is a bit beyond our scope, so let’s instead focus on Manual Milling Machine Donors.  Note that it’s a different story for CNC Routers and Plasma Tables.  Their frames are almost fabricated by the DIY CNC’er.  We’ll talk more about those techniques in another article, but for now, just consider that those approaches typically just aren’t good enough for a decent CNC Mill.

Someone somewhere has probably converted every commonly available type of manual milling to CNC.  If you already have a manual mill, get out there and Google for ideas from others on how to convert it.

But, if you haven’t gotten one yet, just know that they’re not all equal.  There are pros and cons to consider.  The good news is that I have a complete article on how to choose the best Donor Mill for your CNC project.  Be sure to check it out!