Optimize Depth of Cut and Stepover for Better CNC Milling

Optimize Depth of Cut and Stepover for Better CNC Milling

Note:  This is Lesson 5 of our Free Email Feeds & Speeds Master Class.  Click here to learn more about the Master Class.

Let’s start by defining the terms “Depth of Cut” and “Cut Width” (also called “Stepover”).  Since a picture is worth a thousand words:

Depth of Cut is the length of the side of the flutes that are actually cutting.  So, if you’re doing a pocket in several steps or layers, it is the thickness of the current layer you’re cutting and not the total depth of the pocket.  Depth of Cut is also referred to as Axial Depth of Cut.

Cut Width, also called Stepover, is the total thickness of the cut when viewing the cutting tool from above.  It can be no more than 100% of the cutter’s diameter.  Stepover is also referred to as Radial Depth of Cut.

For the sake of completeness, Cutting Speed is defined as your spindle speed (in rpm) in the cut.  Feed Rate is defined as  how fast the cutter is moving through the cut.

Material Removal Rate: What We Optimize

Let’s be specific about what we’re optimizing.  When roughing we want to optimize Material Removal Rate.  After all, the purpose of roughing is raw Material Removal.  We want to do it as quickly as we can without compromising Tool Life so much that it isn’t worth it.

Material Removal Rate (abbreviated MRR) is a function of:

This formula yields the number of cubic inches per minute your cutting tool is removing.

You can see from the simple formula what a huge impact Depth of Cut and Stepover have on machining time.

Do you rely on guesswork or outdated rules of thumb for Depth of Cut or Stepover?

Depth of cut and stepover (width of cut) are crucial variables when milling pockets, profiling, facing, and any other machining operation where you’ll be cutting with the flutes on the side of a cutting tool.  Other important variables are the machine’s capabilities, the material to be cut, and a description of the tool to be used.  The rest can be determined from those variables.

Despite the importance of Depth of Cut and Stepover, most machinists do not have analytical tools that help them to optimize their values.  Instead, they rely on guesswork, rules of thumb, and what has worked well in the past.

Rules of thumb can be useful memory aids when they’re used to refer to simple phenomena that are easily explained.  But, with Depth of Cut and Cut Width, there are so many complex phenomena that interact with each other that rules of thumb are useless.  Worse, they can conflict.

Are your rules of thumb at odds with your productivity?

Effects of Depth of Cut (DOC)

Here are a few of the effects that changing Depth of Cut or Stepover can impact:

There are actually many more such factors, and they’re all inter-related.  Strategies like High Speed Machining make those inter-relationships even more complex and unpredictable.  Choosing the best Cut Width and Depth of Cut are a function of optimizing a lot of trade offs!

One can do systematic experiments given time, but there are so many variables involved that any combination of machine, material to be cut, and tool requires a completely new set of experiments to be done.  A big matrix of Depths of Cut and Cut Widths must be assembled and Feed Rate and Cutting Speed together with MRR’s computed.  Very few have time to do all that, so they fall back on what’s worked in the past, which may not be even close to optimal in the present.

That is, unless you have our G-Wizard Calculator Software.  GW Calculator has not one but two tools for optimizing Depth of Cut and Cut Width.  In fact, since it can calculate Scallop Heights for 3D profiling with ballnosed endmills, it actually has three tools, but we want to focus on the two.

How Do Depth of Cut and Cut Width Affect Cutting Speed and Feed Rate?

A cutting tool has to be able to clear chips that it cuts.  If they’re not cleared, they will be cut again and again.  In that sense, they compete with the end mill’s ability to cut new material.

But, depending on the material to be cut, recutting chips can make things worse in a variety of ways:

That’s all bad, but it gets worse.  At some point, if you’re producing chips fast enough, and your cutter is down in a hole or slot with walls blocking chips in, you will create so many chips that they jam in the teeth of the cutter and you shortly have a broken cutter.

We introduced the Cut Optimizer some time ago and it has been an extremely popular part of G-Wizard. To this day, only G-Wizard has a Cut Optimizer.

The Cut Optimizer is easy to use, and it lets you optimize one of the two variables (Depth of Cut or Cut Width) while you hold the other one constant.   For example, suppose you need to machine a slot that is 1″ deep with a cutter that is the diameter of the slot.  You will be holding Cut Width constant–it’s the diameter of the cutter.  But Depth of Cut is the variable to be optimized.  What the Cut Optimizer does is to calculate the deepest cut that can be taken without creating excessive tool deflection.

Or take an opposite example.  You’re profiling a wall and you’d like to do it in a single pass instead of having to step down for multiple passes.  You want to do this because the wall finish will look prettier without having the steps visible and because it spreads the wear over a longer flute length, which means your tool will last longer.  In that case, Depth of Cut is the constant and the Cut Width is what you’d like to optimize.

Cut Optimizer is good with both kinds of problem and we show you exactly how it works in our G-Wizard University Video:

Optimizing the Depth of Cut or Stepover to keep Tool Deflection under control is super easy.  Just click the title of the one you want to optimize and it’s done: 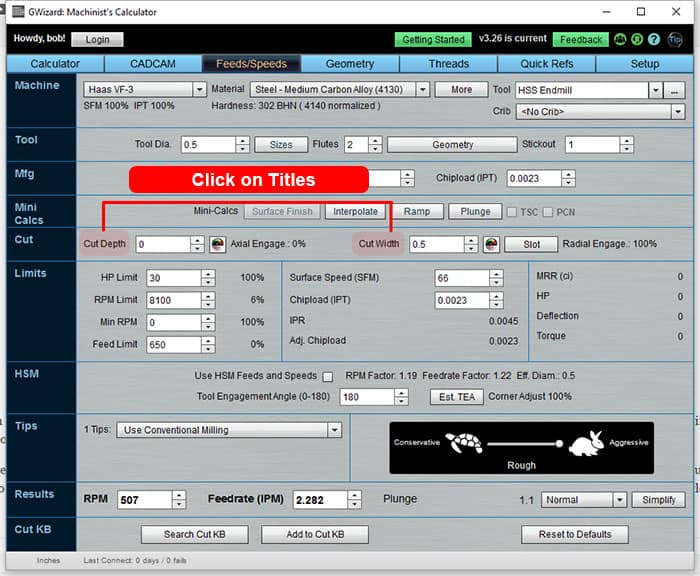 Just click the label of the variable to optimize (Depth or Width) and it’s done!

How Much Deflection Should You Allow When Optimizing Depth of Cut and Width? 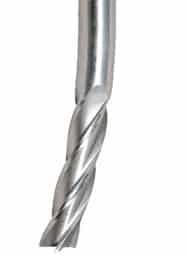 How much tool deflection should we allow?

This is a complex topic, and I’ll refer you to a dedicated article for more information.  Suffice it to say we allow more for roughing than finishing because too much deflection is bad when you want a good surface finish or need to hold tight tolerances.  Therefore, finish passes can tolerate less.

For roughing, deflection is roughly equivalent to runout as far as tool life is concerned.  Even a little (as a % of max chip load), can really shorten tool life.  Thinking of your cutting tool as the paperclip that got bent too many times, and with deflection it is getting bent at whatever your spindle rpm is as times per minute.  Worse, deflection excites chatter like crazy.

G-Wizard’s default deflection limits are pretty conservative, and are aimed at minimizing chatter.  But, you can set them to whatever you’d like. 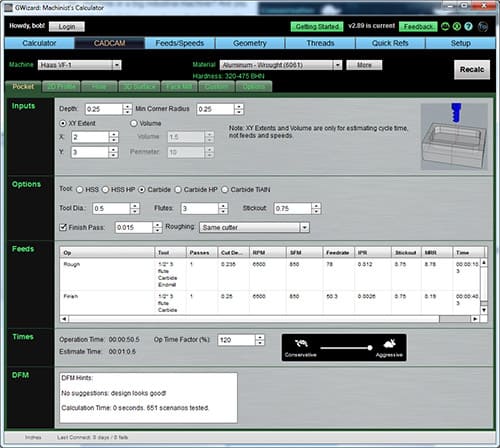 The CADCAM Wizard for finding optimum parameters for pocketing…

Cut Optimizer was a great advancement–finally a tool that made determining the best Depth of Cut or Cut Width a science.  But the CADCAM Wizards are even more powerful and strangely enough, simpler to use.  CADCAM Wizards are a feature included with every copy of G-Wizard Calculator.  They’re accessed by clicking the CADCAM tab.  Imagine having an assistant who was really good at figuring out “Cut Recipes.”  A Cut Recipe is everything you need to know in order to tell the CAM software how to generate a toolpath to cut a particular feature:

–  Which tool to use

–  Depth of Cut and Cut Width

Moreover, you want the recipe to address both roughing and finishing without you having to tell your assistant anything additional.  Lastly, you want this assistant to ask you as few questions as possible.  After all, your time is valuable.  Let the assistant worry about the details.

That’s exactly what CADCAM Wizards do.  It’s easier to watch them in action than to try to explain further, so check out another new G-Wizard University video for the details:

CADCAM Wizards:  Let your smart assistant figure it out…

CADCAM Wizards really put some amazing power at your fingertips.  Like I said in the video, when was the last time you got a chance to run 1100 different scenarios to find the best combination of parameters for a job?  I will never have enough time to do that even once.  Yet as a customer said to me, G-Wizard makes it possible to optimize every cut.  It even makes it easy to do so.

One of the things that CADCAM Wizards help with is High Efficiency Milling (HEM).

While it sounds like it could be something extremely advanced and hard to understand, the principle behind High Efficiency Milling is actually pretty simple.  If you bury your cutter in the work, you’re going to wind up making multiple passes to get down to the full depth of a pocket in many cases.  With HEM, the idea is to use as much of the flute length as possible on your cutter.  You may be able to cut that pocket in a single layer instead of several.

Using more flute length means spreading the wear over a longer length.  That means your cutter lasts longer, or it can also mean you can drive it a bit harder.

In exchange, we back off the Stepover a bit.  Using such deep depth of cut means we could have chip clearance and heat problems.  Backing off the Stepover is how we avoid that.  It turns out the resultant cutting parameters work great for High Speed Machining tool paths, which bring even more performance to HEM.

When CADCAM Wizards are considering the various combinations of Depth of Cut and Stepover, it prefers a greater Depth of Cut over a more shallow one, all other things being equal.

What About Stepovers for 3D Toolpaths?

The astute reader will see that a lot of what’s been said above is great for 2 1/2D machine, but may not apply to 3D Toolpaths.  It’s true, and that’s a whole new area.  We’ve got a great article on selecting the best stepovers for 3D profiling that talks through the theory.  But check it out:

G-Wizard Calculator has a CADCAM Wizard that can optimize stepover for 3D profiling toolpaths using all those same principles.

Both of these tools are unique to G-Wizard, so if you’re looking to make Depth of Cut and Cut Width a little more scientific (and you know you really ought to), you’ve found the right place.  Put them to work for you, they’re quick and easy, and before you know it you’ll find your cycle times are shorter and your tools last longer.  It’s almost as good as sliced bread.  Well, not quite, but close.  If you’ve never tried G-Wizard, be sure to check out our free 30-day trial.