What is Tool Stickout?

Tool Stickout is the distance from tip of tool to where the tool’s shank goes into the tool holder or collet.  It’s one of the key dimensions G-Wizard asks for when you are setting up a tool: 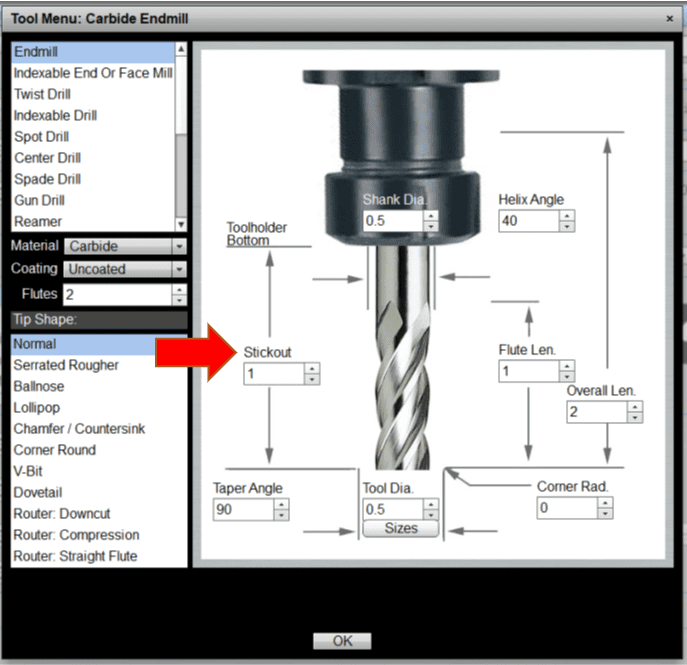 I watch a fair number of videos on machining when I’m not busy producing content or writing software for CNCCookbook.  It’s surprising how many Stickout “Bloopers” you see when prowling videos of even prominent CNC YouTubers.  Here are just a few I’ve come across: 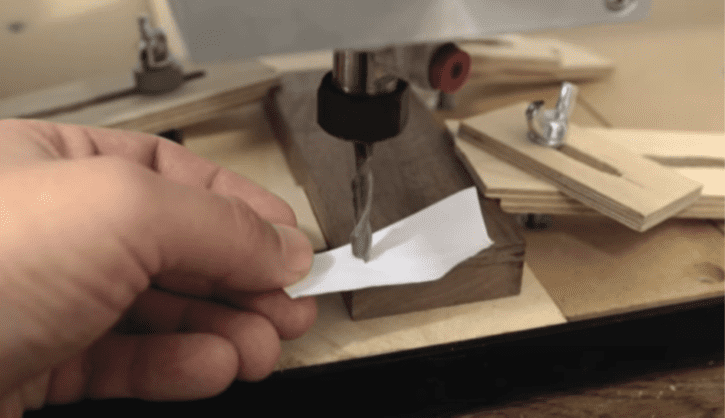 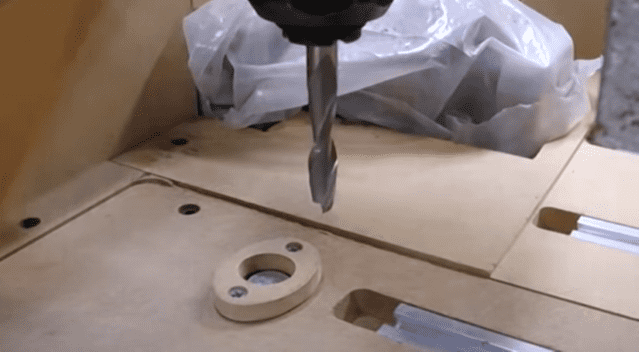 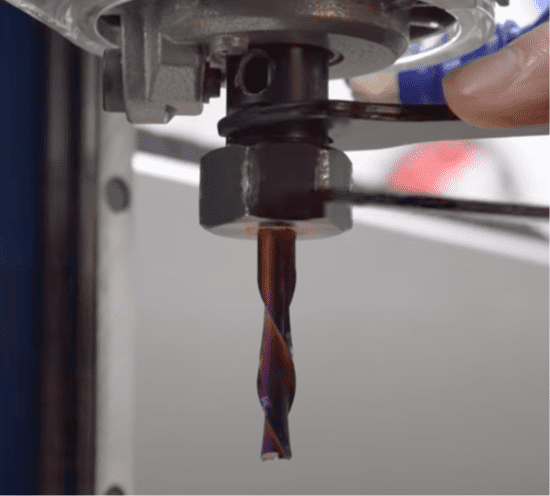 Many machinists just stick the tool in the holder and go from there, not giving much thought to stickout, but here are some serious side effects when you have too much stickout.  The more stickout, the more tool deflection for a given amount of cutting force.  Tool Deflection is very bad for tool life, and also makes it hard to cut accurately if you tool is bent like a pretzel from deflection.

Get used to how tools with too much stickout look from the bloopers above.  A rule of thumb–anything over 7-8x diameter on carbide and 3-4x diameter with HSS tools is too much.  The closer you get to those numbers, the more trouble you’ll have with tool deflection.

I think maybe people think long flute lengths mean more versatility–you can use the cutter on more jobs.  But truth is just the opposite.  Deflection will limit what you can do with such cutters.  Instead, get the shorter flute lengths and push them up into the tool holder as much as you can.  A rule of thumb would be keep as much stickout as you need for the cut plus one tool diameter for extra clearance.

We can do better at optimizing stickout, so let’s get into it.

What’s the optimal length of stickout for a tool from the tool holder?  Whatever it happens to be?  Whatever was the least stickout you could get by with and avoid having the toolholder hit the workpiece?  Is there some other strategy to optimize stickout?

Tool Stickout is an important topic because it governs a lot of the limiting factors around using the tool.  Stickout is the distance from the tip of the tool to where the tool shank goes into the tool holder.  The longer that distance, the further the tool sticks out.  That’s helpful when you need the clearance, but increasing stickout can severely reduce the rigidity of the tool in the cut.

G-Wizard Calculator includes a Rigidity Calculator, so let’s use it to get an idea of what I’m talking about.  Suppose we have a 1/4″ carbide endmill with a stickout of 3/4″.  If we can pull the tool up into the toolholder just 1/3 of the stickout, in other words, if stickout was 1/2″ instead of 3/4″, that tool would be 3.375X more rigid: 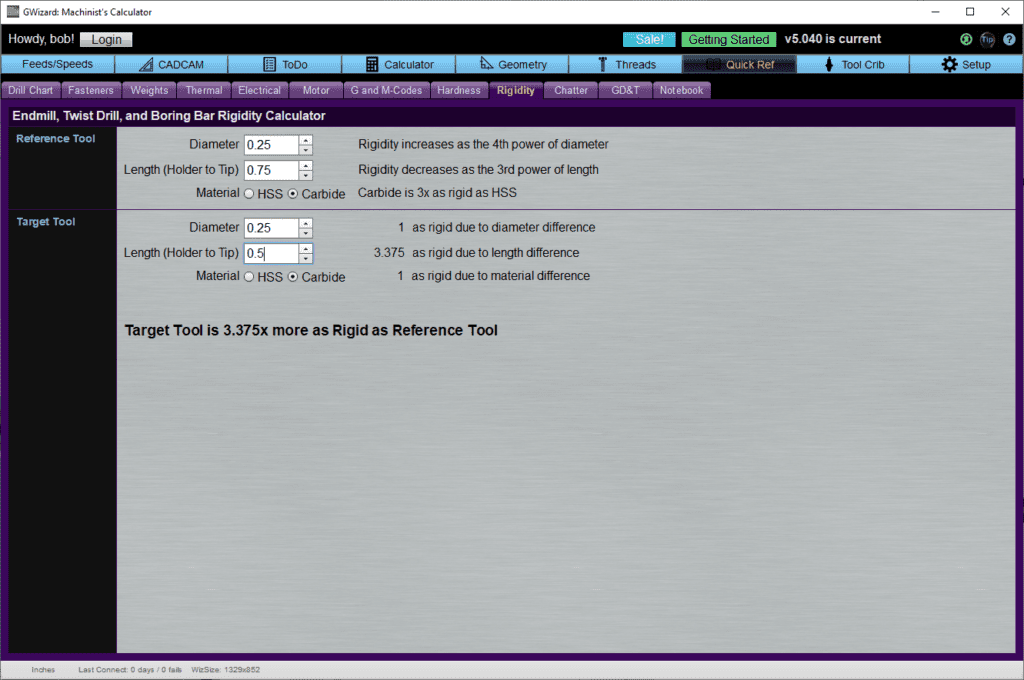 Suppose we can reduce that 1/2″ of stickout to 0.430″ of stickout–that’s just 70 thousandths less.  Turns out that’s enough to increase rigidity another 50%.  Even relatively small changes in stickout matter a lot to rigidity!  And that rigidity can radically affect all sorts of important areas:

Am I starting to get your attention?

Having a way to optimize your tool stickout so that you have just enough and no more can help you to achieve maximum productivity and tool life.

There are a four key factors that limit stickout:

1.  Clearance:  The tool has to stick out far enough that it can reach the bottom of any pocket or other feature without the toolholder contacting the workpiece.  If you’ve got a 1/2″ deep pocket, you can’t cut that pocket (at least not all of it) with a tool that only sticks out 1/4″.

2.  Coolant Access:  Imagine you’re using a relatively large tool holder, say an ER32 collet chuck, and a 1/4″ end mill like the one from our rigidity example.  The ER32 nut is significantly larger around than the endmill.  Now further let’s suppose we’ve seriously minimized the stickout.  We’re cutting a 1/2″ deep pocket and we have stickout of 0.600″–so there is only 1/10 of an inch between the bottom of the tool holder and the top edge of the pocket.  If you visualize that situation, it’s going to be darned hard for the coolant to get through that 1/10″ gap to the cutter and down into a 1/2″ deep slot with any force.  Chip buildup will be a problem.

3.  Length of flutes.  You don’t really want the toolholder choking down on flutes, you want it on the tool shank.  Excessive flute length will force a minimum stickout.  Use the shortest flutes the job will allow when selecting an endmill.

4.  Same tool on lots of jobs.  You’ve got a tool in the tool changer, or in a toolholder.  If you use a CNC Router, there’s one in your spindle.  You didn’t optimize it for this particular job, but you want to save the time and just run it on this job.  So, stickout is what it is and you need to move forward.

There’s not too much we can do about clearance around the workpiece, but for coolant access, we can try to minimize the toolholder’s diameter so it blocks less.  Instead of grabbing the biggest collet chuck you have, grab the smallest one that can accomodate your endmill.  We can also try to orient the coolant nozzles to shoot down into the hole instead of bouncing off the toolholder.

With these understandings in place, let’s consider three strategies for optimizing tool stickout.

With the caveats of coolant access and flute length in place, the most obvious strategy is to minimize stickout for each tool and each particular job.  To do so, we need to be able to take measurements of how far below the top of stock each tool will go for a particular job, and we’ll need some idea how much additional clearance may be needed to clear clamps and other fixture parts as well as any part features that may stick up and be in the way.  One easy way to quickly get an idea of how much clearance each tool requires is to use our G-Wizard Editor.  As part of loading and simulating a program, it produces a tool table on the Tools tab that has the lowest Z coordinate used for each tool: 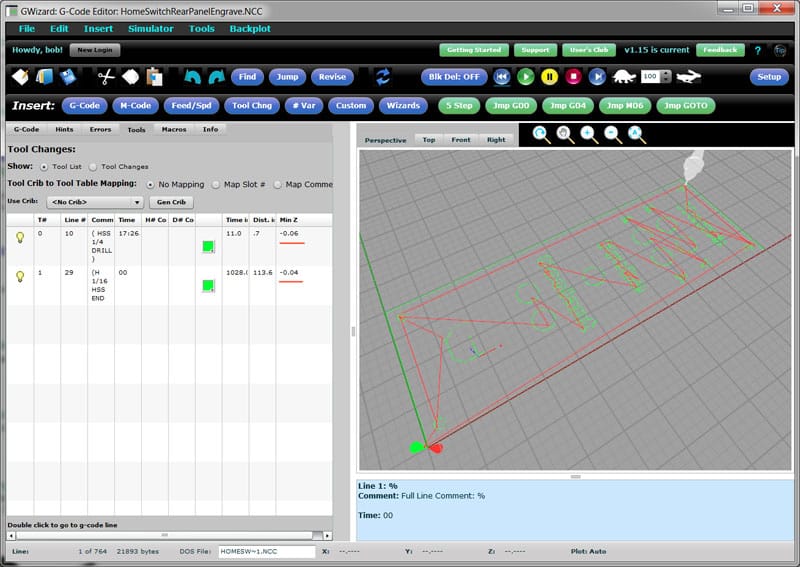 The minimum Z for each tool is in the “Min Z” column in the Tools Table.  This is a new feature in GWE v1.15…

This particular program is one of our stock sample files and it is an engraving program for a thin aluminum electronics panel.  There are two tools, one with a minimum Z of -0.060″ and one with -0.040″.     Given that it is an engraving job, not much stickout is needed, so we can keep tools short.  By using G-Wizard in this way, you can tell exactly how much stickout a given program needs.  Of course you’ll have to know what Z corresponds to top of material and do the math as well as adding an allowance for any fixtures, clamps, or part features that might be close enough to get in the way, but you can save yourself a lot of time this way as well as winding up with really optimal stickouts that maximize rigidity.

Okay, you’ve got the tool in the tool holder, you entered your stickout into G-Wizard, and it’s giving you a deflection warning.

But, no worries.  First, G-Wizard lets you optimize multiple variables to fix a deflection warning:

Yup, you may not have to touch the tool at all, just change one of the other parameters.  You can find the exact value needed by clicking the little speedo button next to the parameter (arrows point to speedo buttons): 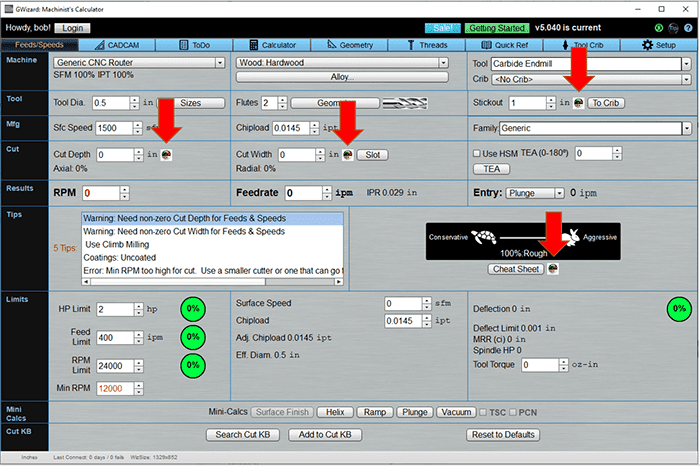 G-Wizard will calculate the maximum value of the parameter that doesn’t trigger a deflection warning with one click.

Is there any reason not to always use the minimal stickout for each job?  Can any advantage be gained?

This is a question of what sorts of jobs your shop runs and how you approach the problem of chatter.  If you’re going to manufacture lots and lots of the same parts, you will need to optimize the cycle time and that’s going to come from getting the minimal stickout for the particular job.  If, on the other hand, you do lots of different parts with short runs, setup time becomes your limiting factor as each new job requires a different setup.  You can get tired of unloading the toolchanger, resetting all the tool stickouts, and then reloading pretty fast.

Chatter also complicates the question from two standpoints.  First, if you use the same stickouts, chatter is a repeatable phenomenon.  In other words, with the same kind of tool holder, endmill, and stickout, you’ll get chatter at the same spindle rpms each time.  Knowing this, you can map out some optimal rpms to get what’s called stable milling without chatter.  For more on all this, check out my article on chatter in the Feeds and Speeds Cookbook.

Since changing the stickout will also change the chatter frequency, it is sometimes helpful to vary stickout to achieve a more optimal spindle rpm range when cutting.

These are relatively sophisticated considerations that seem very job-specific, so how can we come up with a strategy that helps a shop optimize its overall results?

One answer is to standardize tool stickouts and choose several values for each tool diameter.  Let’s take our 1/4″ endmill.  Perhaps your shop will use 3/4″, 1/2″, and 3/8″ stickouts, or some such.  The point is to document your shop’s standard stickouts and stick to using stickouts at one of the documented numbers.  To set up a job, you’d run a report such as G-Wizard Editor produces that shows minimum stickouts.  Then you’d find the standard stickout for your shop that was closest to but larger than the minimum.  That’s the one you’d use, and hopefully there are holders already setup with endmills in the standard stickouts so you can just grab one if you don’t already have one loaded.

Now let’s say you hit chatter.  Since you’ve standardized stickout, endmill, and tool holder, you can be assured you’re going to get chatter at that spindle rpm on that machine any time you run at that rpm and drive the cutter hard enough to chatter.  So, you adjust the spindle rpm (try both more and less, you’re just trying to get out of the chatter zone and stop the resonance) until the chatter is minimized.  Hopefully, you’ve even got a record you can refer to that tells you what worked in the past.  If you’re using GW Calculator, you can use it’s Cut Knowledge Base to track these things.

With a system like that, you’ll go through a period of experimentation until you’ve mapped out how to minimize chatter for your standard cutter configurations, and then you’ll be able to go forward very quickly from job to job.  There are even tools available to help you standardize stickout lengths, such as Stop-Loc.