Should You Choose a Horizontal or Vertical Machining Center? 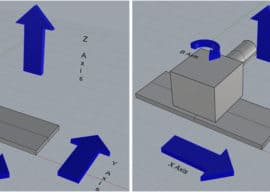 I hear this question a lot:  why would I choose a Horizontal Machining Center?  Or, when is an HMC better than a VMC, I hardly ever see HMC’s?

Like so many things, the answer to these questions is complex.

The thin gray rectangular block is the machine table, the cylinder is the machine’s spindle, and in the case of the HMC, the gray cube is the tombstone.

“What’s a tombstone?” you ask.  It’s a big block of cast iron that sits atop an axis for rotation.  You attach the workpieces to the tombstone sides.  You can think of this whole thing as a 4th Axis for an HMC, and they have a lot in common with a VMC’s 4th Axis, but they’re much more pervasive.  One sees a lot of VMC’s with no 4th axis currently in use, but most HMC’s use them constantly.

Let’s start with the HMC cons:  their disadvantages versus VMC’s.

One thing that’s immediately apparent from the diagram is that it’s harder to see what’s going on with an HMC.  The spindle is back behind that big tombstone.  You can come at it from the side, but no matter what you do, the machine’s column and so forth generally provide less clearance and make it harder to access the workpiece.

That means doing a touch off, eyeballing what’s happening, and all that sort of thing are a little harder.

Another thing about HMC’s–I mentioned they have Tombstones and 4th Axes and use them constantly, much more than most VMC’s use their 4th Axes.  HMC’s tend to be more expensive than VMC’s.  Actually much more expensive.  On average HMC’s cost $375K whle VMC’s cost $115K.  As a result, 4 times as many VMC’s are sold vs HMC’s every year.  Since there are so many more VMC’s, many fewer machinists, operators, and shop owners have experience with HMC’s.

BTW, for a general overview of how much cnc machines cost, see our linked article.

Those three factors–they can be harder to use, they cost a lot more, and fewer people have experience with them–are probably the chief reasons they are so much less common, but let’s wrap up a few more HMC Cons before we move on to consider their advantages:

–  They’re harder to program well if you want to take full advantage of them.  This is not really due to any inherent fault of the HMC concept, it’s because taking full advantage means cutting more sides of the workpiece without changing setups, which means managing more work offsets, and more complexity.  It means managing the pallet changing that most of them have, and other higher end features common on higher priced machines.  It means that since you’ve got a 4th axis set up all the time, you may take on more jobs that involve 4th axis contouring.  It means that since  you have a more rigid machine, you will want to wring out every last bit of performance goodness that it has available.  As I’ve heard more than a few people say about this “problem”, it’s a high quality problem to have.

– The tooling costs for one HMC are quite a bit higher than for one VMC.  They like more expensive cutters because they can extract more value from them.  Tombstones and associated fixtures are much more expensive than a few machining vises.  Reality is, a typical HMC is worth several VMC’s in terms of productivity, so you’ll save in not buying redundant tooling (3x the toolholders for 3 VMC’s) and actually come out ahead.  Still, if you already own the VMC’s and you’re talking about incrementally adding an HMC for a LOT more capacity or one more VMC for a little more capacity, the tooling is expensive.

–  Given the programming is harder, the fixtures are more expensive, and you’re pushing the machine harder, you probably need to invest in Verification/Simulation software to make sure all goes well when you press the Green button.  As we’ll see shortly, these machines typically are running their spindles 85% of the time.  Whatever you can do offline and not on the machine, you should.  Offline toolsetting is another example.  Once again, these are high quality problems to have, but they do represent startup costs.

–  HMC’s are typically bigger and heavier than equivalent work envelope VMC’s and so will require more floor space.

–  While HMC’s handle more of most parts on their tombstones, VMC’s are better with large plates.

The final point will stand on its own:  to make full use of an HMC you have to be a better machinist than you would to take advantage of a VMC.

With all those Cons, there must be some reason people still buy HMC’s, and there is.  Some of the clues to understanding why are apparent from some of the “High Quality Problems” described for HMC’s.  Simply put, for the kinds of jobs, HMC’s can be far more productive than VMC’s and will more than pay for themselves.  Most HMC’s have a few fundamental advantages over VMC’s.

First, chip evacuation is aided by gravity.  On a VMC, chips in deep holes and pockets sit in the bottom and have to be dragged out by coolant or the cutter’s helix.  On an HMC, things are turned on their sides and gravity helps pull the chips out.  If nothing else, this means significantly less chip recutting which leads to longer tool life and better surface finish.  The surface finish is often so much better that less downstream processing is needed–many parts have an acceptible finish right off the machine.

Second, these machines are more rigid.  They’re built more heavily because they’re intended for higher volume production, and the structural loop from the spindle, through to toolholder, to the tool, through the workpiece, and back up the column to the spindle is shorter and the forces are acting more favorably against geometry.  They vibrate less, deflect less, and are less likely to chatter than VMCs.

Lastly, and perhaps most importantly, HMC’s are typically configured with options that greatly improve productivity.  Most all HMC’s will have a 4th axis tombstone capability.  Many also integrate that with a pallet changer.  Another common option is high pressure through spindle coolant.  You can buy a VMC configured with 4th Axis, stick a tombstone in the 4th Axis, add pallet changing, and add through spindle coolant, but most VMC’s are not configured that way and even when they are things don’t work as well as on an HMC.  Take the idea of 4th Axis workholding on a VMC.  Clearance is a real problem because it must fit between the table and the spindle: 4th Axis Workholding for a VMC

You can fit a vise on such an arrangement and save setups by accessing 3 sides of the work.  But on an HMC with full tombstone capability you get something like this: 4th Axis Tombstone for an HMC

3 sides can be accessed for each workpiece, but many more workpieces can be mounted on the tombstone.  To top that off, the HMC tombstone sits on an interchangeable pallet.   While one full tombstone of parts is being machined, the other sits outside the enclosure being set up or loaded/unloaded.  This is how HMC’s achieve 85% spindle utilization versus the average VMC’s 25%.  That means the HMC’s spindle is running more than 3 times more often and may very easily be making more than 3 times as many parts as the equivalent VMC.

Achieving higher spindle utilization may be particularly important if you’re machining titanium or other difficult materials.

While we’re on the subjects of cost and productivity, let’s talk about machine operators.  Given than an HMC can do the work of 3 VMC’s, that means fewer operators are needed.  This represents most of the further savings that puts HMC’s ahead of VMC’s in terms of ROI once all the factors are considered and you have the right kinds of jobs for a Horizontal.  With the right fixturing (which may be more complex to design and more expensive to create), many shops claim less training is required for their HMC operators too.

To cap the discussion of HMC Pros, I want to pass along a quote from one shop that claims they can quote 25% lower prices with their HMC than their VMC’s and still keep the same profit margin.  They strongly believe their HMC is winning them more business as a result.  Given the higher production volumes, lower quotations, and capability to do more sophisticated machining, owning a horizontal can move a shop into a whole new category where it can bid on jobs it couldn’t before.

For those shops that need to be the most competitive, have the best expertise, have the capital to invest, and can really afford to push to pump out the parts in volume, HMC’s make a lot of sense.  The investment is really a key enabler for a shop considering an HMC.  Investment in skills, more expensive machining centers, and sometimes upgraded tooling.  Between the nature of doing setups on the tooling and the increased accuracy jobs their HMC’s allow them to bid on, another shop founded they needed to invest in CMM’s because height gages and mics just weren’t going to cut it.

If investment capital is tight, if you’re just starting out and haven’t accumulated the skills and experience, if you need simplicity, if you change jobs a lot and have very low quantities, if you seldom need to consider any 4th axis work, and if you do a lot of work on large plates, stick to VMC’s.  Horizontal Machining Centers are seldom the first machines a shop buys.  Get that first VMC, go on to a second, and then consider an HMC.  It has the potential to more than double the capacity of your 2 VMC’s.