The 4 Fastest Ways to Break an Endmill: Chip Clearing, Built Up Edge, Runout and Deflection 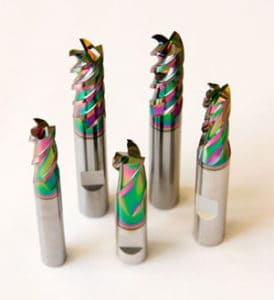 It should be no surprise that I consult with a fair number of people who have problems breaking tools and wonder why.  I’m happy to help as I have written extensively on the subject and sell the world’s best feeds and speeds calculator (even if I do say so myself).

Sometimes the problem will turn out to be feeds and speeds, but more often, if the inquiry comes to me, the individual is already using good feeds and speeds provided courtesy of our G-Wizard Calculator.  “I did what your calculator asked, so what now?” they say.

A that point, 99.9% of the time, their problem will boil down to one of 4 things.  Note that we’re talking about breaking cutters, not wearing them out prematurely.  There is an old machinist’s adage that if you break a cutter, it is likely due to too much chip load, and if you wear one out prematurely, it is due to too much surface speed.  It turns out that each of the 4 things amount to having too much chip load and they happen more often than you’d think.

How do cutter manufacturers determine their recommended chip load?

It’s largely a function of how well the cutter can clear the chips out of its way.  If they become packed too tightly in the flutes, clearing the chips stops and the cutter is sure to be broken pretty shortly thereafter.  All too often I see folks that think chip clearing begins and ends with the flutes of the cutter.  Nothing could be further from the truth.  That’s just the first stage.  You need additional means of clearing the chips away from the cut as quickly as possible.  Techniques include flood coolant, mist systems, air blasts, and even vacuuming. Whatever method you choose, adopt an attitude of being rabidly paranoid about chip buildup.  Get them out and away from the cut as quickly as possible.

A good way to remind yourself is to think of work hardening materials like stainless steel.  Every chip being thrown off is hardened.  Imagine what it would do for the life of your cutter to scatter a handful of hardened metal chips in its path that it has to work through in the course of doing its job–not helpful!

Certain materials like aluminum have an affinity for the metals that machine tool cutters are made of.  They literally want to weld themselves onto the edge of the tool.  You could call this another failure to clear chips, but let me tell you, once that metal starts welding itself to the edge of your cutter, things go downhill in a hurry and you wind up breaking a cutter.  When you’re working with materials that have a tendency to stick, you have to make sure there are countermeasures in place to lubricate that cutter edge so the chips just slide back off again.  This is one of the major roles of coolant, whether it be flood coolant or mist coolant.  If you can’t arrange for either, you’re left having to rely on a coating on the tool.  That can work, but coatings wear off, and when they do, the chips will suddenly start grabbing the tool edges with predictable and unhappy results.

Any time the broken tools are relatively small in diameter, I bring up the issue of spindle runout.  If it’s a hobby-class machine, runout is even more likely the culprit.  Think of it this way: we normally measure the allowable chip load in thousandths of an inch.  A 1/8″ 3-flute carbide endmill might be rated for 0.001″ chip load in aluminum.  Now let’s suppose we’re running full blast and using every bit of that 0.001″ that is available.  Let’s introduce a little runout, say 5 tenths or 0.0005″.  We can regard that runout as being additive to the chip load because the cutter is not spinning on its axis due to the runout.  That bit of runout just put us 50% over the recommended chip load, which is a good way to break a cutter fast.

Runout has a variety of sources.  Your spindle may have some inherent runout.  This is one reason why the taper in a spindle is typically ground while the spindle spins in its own bearings.  Your toolholder can add runout.  If the toolholder is a collet chuck, the collet can add runout.  I remember breaking five 1/8″ endmills one day because of collet runout.  I kept suspecting a set of new but cheap collet chucks I’d bought and swapping them out.  It never occurred to me until the fifth endmill was shattered to check the brand new name-brand collet, which turned out to have been ground wrong and had 0.001″ runout in it.

Many tooling manufacturers will say that each tenth (0.0001″) of runout reduces tool life by 10%.  This is not only due to the fact that runout increases chip load, but by running the cutter off-center, it also means that one of the flutes (the one furthest off the spinning axis) is having to do most of the work so it wears out much faster.

If you have any doubts, read our round up article on how to measure and fix your spindle runout and then make sure it’s okay.

Tool Deflection is an insidious phenomenon that can really add up.  It behaves just like runout because it makes the tool run off center.  0.001″ of deflection is the same from the tool’s perspective as 0.001″ of runout.  Yet the deflection is much sneakier because we can’t see or measure it very easily.  It only occurs while the tool is in the cut.

Fortunately, G-Wizard was one of the first resources available to machinists that accurately calculates tool deflection so you can avoid it.  It will even go so far as to optimize your depth or width of cut to maximize the Material Removal Rates while staying within the prudent limits of deflection.

If you’re running a gantry router or a smallish machine, you’ve got to consider that the tool can deflect not only because of the tool itself, but because the whole machine may be deflecting.  Here again, deflection in the wrong direction can be additive, forcing the cutter deeper into the cut.

Climb milling creates such forces and a machine with excessive backlash can suddenly find the end mill is sucked deeper into the cut  by the amount of the backlash.  That’s usually more than enough to break the cutter and create considerable mayhem around the machine.  Hence climb milling is not advised on machines that have much backlash.

To learn more about Tool Deflection, check out our comprehensive article and video.