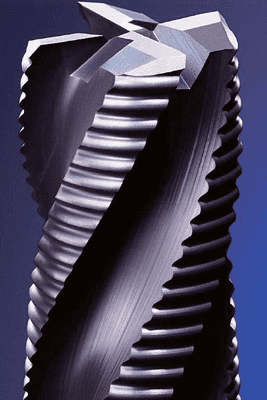 “Corncob” Roughers are roughing end mills that have serrations on their cutting edge to help break up the chips.  This results in lower cutting pressures for a given radial depth of cut.  You’ve probably wondered what the advantages are for a roughing end mill, so I thought I’d put together a post and talk about them a bit.

These roughing end mills are only useful for roughing as the serrations leave tracks on any walls machined on the workpiece. So, unless you don’t care about those tracks, you’re going to need to put up with a toolchange to a finishing end mill and another pass to finish your part.  Because of these extra steps, it’s reasonable to wonder about the value of a roughing end mill.

What do they do that standard end mills don’t?  A roughing end mill has at least two strong benefits relative to regular end mills.

Their first advantage is that they often seem to minimize chatter.  If you’re hogging hard and getting chatter, try a roughing end mill and see if it doesn’t go away.  The configuration of the teeth with the serrations changes the characteristics of the vibration and can often move the frequency out of the critical zone for chatter.  For more about these sorts of effects, see our Feeds and Speeds Cookbook chapter on chatter.

The second advantage for a roughing end mill is they can run considerably higher chip loads than comparable finishing style end mills.  The serrations chop the chips down to smaller segments, which means more of them can be packed into the flutes without jamming.  In addition, the smaller chips are lighter making it easier for your coolant, air blast, or mist system to clear the chips from the cutter.  The combination of these effects is significant.

At the behest of a customer, I recently revisited the chip load bonus our G-Wizard Feeds and Speeds Calculator gives to roughers.  I went through the offerings from 10 different end mill manufacturers and reviewed the chip load multiplier for their corncob roughers versus the closest equivalent finishing end mill for aluminum and steel.

The results were impressive and ranged from a minimum of 1 to 2.75 at the top end.  The average was 1.48 and the median was 1.23.  When doing these kinds of analysis, I have a statistical model I use to clear out the far outliers and get to an amalgamated value that is better than a simple average.  It’s proprietary so I won’t go into it.  When all of that was said and done, I wound up increasing the bonus G-Wizard awards these roughers from 20% to 38%.

BTW, these chip clearing advantages make them especially well suited to deep slotting applications.  They also often result in lower cutting pressures, which may be helpful in tool deflection challenged situations or on smaller machines.

One other thing to note about these corncob–style roughers is that they use a cylindrical grind which makes them relatively easy to sharpen.  Resharpening tools can save a considerable amount over replacement.

The serrated style roughing tools can be had in all the typical number of flutes configurations, so they can be used for virtually  any material

Is it worth a toolchange to get a 38% increase in Material Removal Rate?  You be the judge, but I really like using this style cutter!

What is a Roughing End Mill?

Roughing end mills are used to quickly remove large amounts of material.  They work by having serrations (very fine teeth) on the flutes.  Because of the serrations, they leave a lot of tooling marks on the walls of the cut, so a separate finishing pass with a conventional solid end mill must be made.

Why do roughing end mills have teeth or serrations?

The serrations ensure chips are broken into short lengths to make evacuation easier at higher chiploads.  They can be especially useful in materials like aluminum that tend to generate long stringy chips.