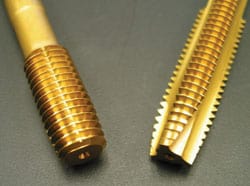 While many machinists may think form taps are only for aluminum, the answer to the quick question is you can form tap materials up until they have a hardness greater than 36 HRC, which is about 340 BHN. That actually covers a surprisingly wide range of materials including a lot of steels. That information comes from tapmaker Titext via the link I’ve provided.

Second tapping tidbit: you can “peck” tap difficult holes. For the most part, you will need rigid tapping to be able to peck tap because the tap has to get itself synchronized back to the same set of threads as it goes in and out of the hole. Peck tapping is only called for with a cutting tap–no benefit to pecking with a form tap. Peck tapping is also an excellent way of clearing the long stringy chips often found when machining plastics and some other materials .

Third tapping tidbit: Would you like to know the ultimate secret to maximizing the life of your taps?  It boils down to selecting a thread percentage that gives you enough thread strength while minimizing the torque that must be applied to the tap.  That all comes from selecting the right drill size.  Check out our Drill Tap Size Chart and Calculator for the details–seriously good stuff there!

Fourth tapping tidbit:  Use tapping fluid–your taps will thank you all most as much as they did when you pulled that thread percentage trick above.  Everbody I read suggests Moly-Dee is the one to choose.  Just sayin’!

Last tapping tidbit: For the hardest materials, and especially when the cost of a broken tap is very very high, consider thread milling. You’re much less likely to break a thread mill, and if you do, it won’t be stuck in the hole the way a tap would be.

Encore Tidbit: Consider a tension compression holder even when rigid tapping.  Read our article on rigid tapping pros and cons for more on that.

Postscript:  In a discussion about form taps, one individual suggested the not be used for aerospace applications because the threads are more brittle in certain alloys of aluminum.  I found this interesting because it was the first I had heard of it.  Prowling various tooling catalogs, I could find no mention of such a recommendation.  At best, Guhring suggested not using form taps in aluminum alloys with more than 10% Silicon.  After extensive Googling, I eventually found an interesting thread on Practical Machinist.  That thread concluded that there was no guideline suggesting never to form tap, but rather it was a function of the particular specifications for the part.  Some machinists had dealt with companies that never allowed form tapping of their aerospace parts while others insisted on it, or didn’t care.  The moral of the story is to always check on critical parts like aerospace if there is any doubt.