New: Machine Learning for Cutting Tools and Feeds and Speeds 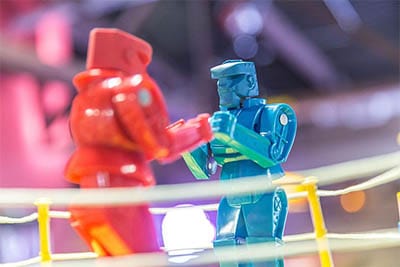 These days, it seems like Machine Learning is being talked about everywhere.  Self-driving cars, machines beating humans at every game, Google search results change based on machine learning–artificial intelligence has become much more common that it was in the past.

There’s a reason for that: Machine Learning allows software to learn new tricks without requiring programming.  That’s a very useful trick because it makes the software tremendously more flexible and able to adapt to the needs of its users.

G-Wizard Calculator has had Machine Algorithms for quite a while.  They’re the central engine that drives the CADCAM Wizards feature.  Machine Learning comes into play there because what CADCAM Wizards do is take a few basic pieces of information and use them together with the core Feeds and Speeds Calculation Engine to find the optimal combination of parameters for a complete cut “recipe”.

CADCAM Wizards are very powerful as a result, and unique in the industry.  They’re capable of running anywhere from hundreds to thousands of scenarios through the Feeds and Speeds Engine to get the result back.  When was the last time you remember having investigated hundreds of different parameter combinations to optimize your Feeds and Speeds?

Nobody has time for that, but if you’ll let G-Wizard do the job for you, it all happens very quickly and you get the benefit of those optimized results.

G-Wizard does a great job out of the box providing Feeds and Speeds that are a good starting point for a huge variety of tooling and jobs.  G-Wizard owners reported to us that they were getting 57% more tool life and a 46% average increase in cutting speed.  All this was accomplished largely with G-Wizard’s generic tool data, which just goes to show, there’s a lot more to optimizing your feeds and speeds than what you see in a manufacturer’s tooling catalog.

G-Wizard has had the ability for a long time to accept your Manufacturer’s recommended surface speed and chip load for a long time.  It looked like this:

Why use G-Wizard if you have to look up the Manufacturer’s Data, anyway?

First, as I’ve mentioned, there’s more to Feeds and Speeds than the Manufacturer’s Data and our users were getting tremendous results just using the defaults.  But, the reason to do it is that it’s easy to do and it can potentially give you even more aggressive Feeds and Speeds.  After all, each manufacturer has their own special features for their tooling, and some tooling is capable of more performance than any generic description can account for.

The good news, is you don’t have to enter all the data from the tooling catalog to use Manufacturer’s Data for your premium cutters and inserts.  That data is commonly given as ranges, but G-Wizard just needs the most optimistic values for a particular material and cutter diameter.  G-Wizard’s Cutting Physics Engine can take that information and extrapolate the rest based on the Cutting Conditions you enter (Cut Width, Cut Depth, and so on).

To accomplish that, we added the notion of “Tooling Families” to G-Wizard.  Here’s the new Manufacturer’s Data area in the latest versions of G-Wizard:

There’s a new Tool Family selector in the Mfg’s Data area.  By default it’s set to “Generic”, which causes everything to operate just as G-Wizard has.  But, if you click the dropdown arrow, you get the Tool Family popup: 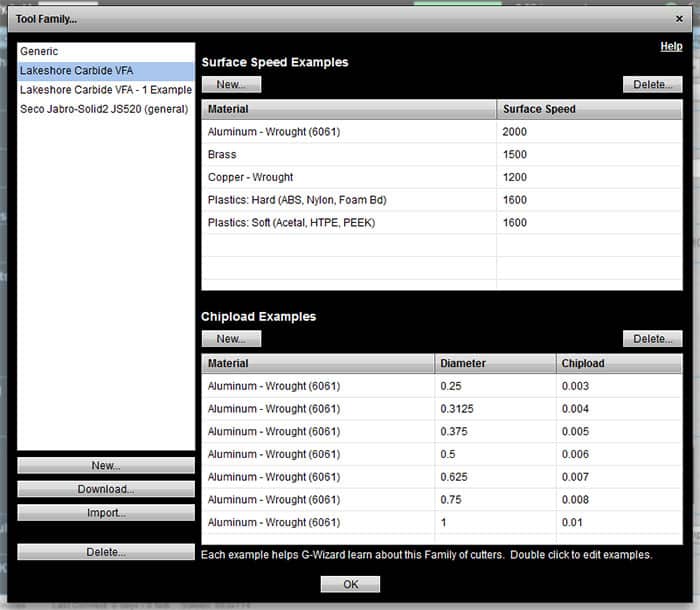 The Tool Family popup selects the family on the left, and on the right you get what we’re calling Feeds and Speeds “Examples.”  The Examples are the Machine Learning aspect of the feature.  You can enter as much data as you like, and G-Wizard learns how to compute better and better Feeds and Speeds from that data.  Best of all, the examples are saved as Preferences, so you don’t have to keep re-entering them.

There are two kinds of examples:

The screen shot shows a fairly complete profile for the Lakeshore Carbide VFA Variable Flute for Aluminum series.  Here’s an example of the same end mill but with only 1 example: 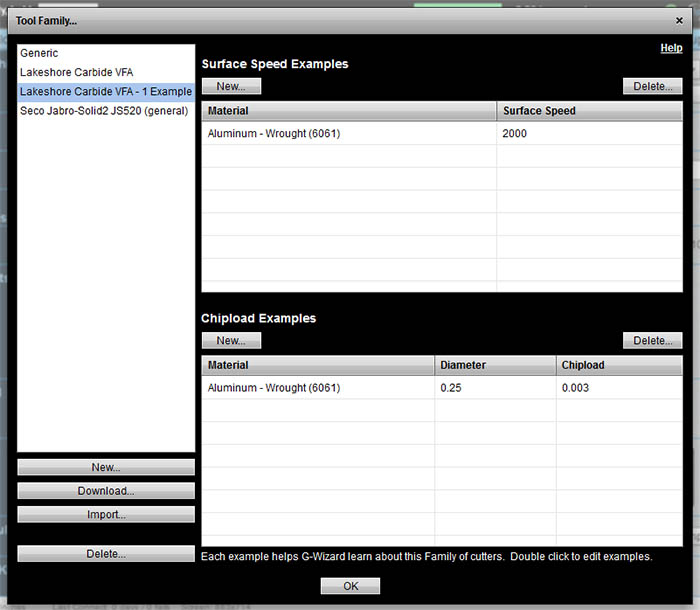 In this case, we have one Surface Speed and one Chipload Example.

So what’s the difference between the two?  How far can G-Wizard go with fewer examples?

The Machine Learning algorithms give G-Wizard the ability to learn, but it can only learn so much.  For example, it’s not going to try to extrapolate the learning to new materials.  If you have only provided examples in Aluminum, it’s not going to try extrapolate that to Tool Steel or Stainless Steel.  There are just too many differences, and in fact, many times, manufacturers will direct you to different tooling lines for different materials.

So, you’ll need to have at least one Surface Speed Example and one Chipload Example for any material you want to work with.

What about the Chipload Examples?

Here, G-Wizard works with the available Examples and its own notion of a default cutter.  As mentioned, it needs some Examples with the same material.

Think about Examples like this–use them as you need them.  Use them on demand.  In other words, if you start a new material, enter an Example for that material–both Surface Speed and Chipload.  If you’ve got an Example or two for the material, and you aren’t getting as much juice to the Feeds and Speeds as you’d like, add a Chipload Example for the particular cutter you’re using.  This keeps the effort to a minimum while maximizing results.

For more on Tool Families, check out the Getting Started Tour on using Manufacturer’s Data.

I mentioned as part of our last release that there’s a lot going on underneath the covers to improve and expand the architecture of G-Wizard.  There’s quite a lot more yet to come based on the new architectural underpinnings.  There’ll be more Machine Learning, and there will be more capabilities added to the currently released features such as Tool Families.  For example, there are buttons to import and download Examples, but they don’t do anything yet.

Stay tuned, much more to come!