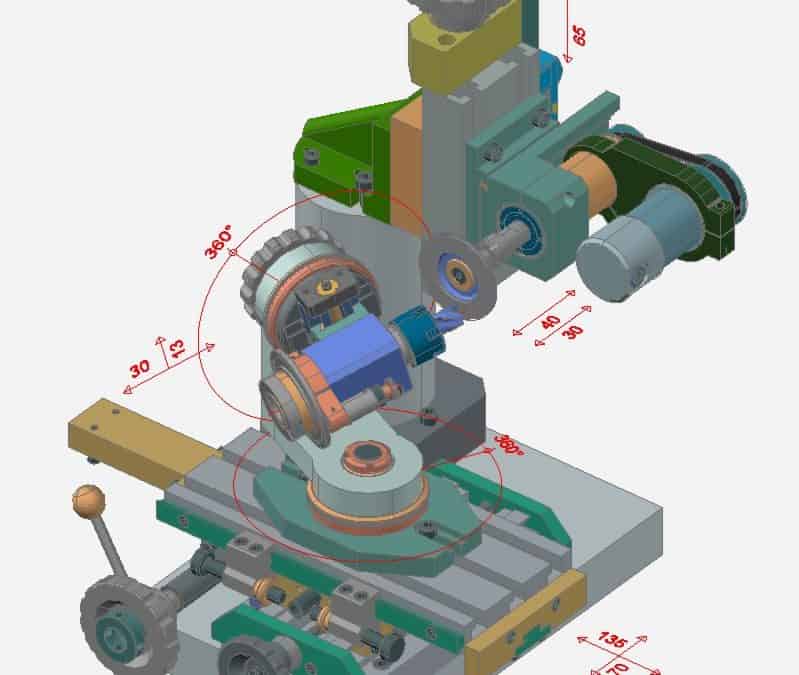 At some point most hobby machinists get interested in possibly building a Tool and Cutter Grinder.  There’s something fascinating about building a machine tool from scratch, especially one with all those knobs and levers.  There’s good reason for professionals to have access to such devices as well, though they’re not all that common these days.

This article is a starting point for would-be DIY Tool and Cutter Grinder Projects.  It’s a compendium of Ideas and links to other articles that can serve as resources.  It runs from the more famous manual machines, like the Quorn Tool Grinder through to my own fetish which is a DIY CNC Tool and Cutter Grinder.  We’ll start out simple and move to the complex.

Lots of folks feel this inexpensive tool and carbide grinder is a great buy and a must-have for the home shop. Mine has performed extremely well right out of the box. I even went quite a ways with the relatively low quality wheels that came with it. 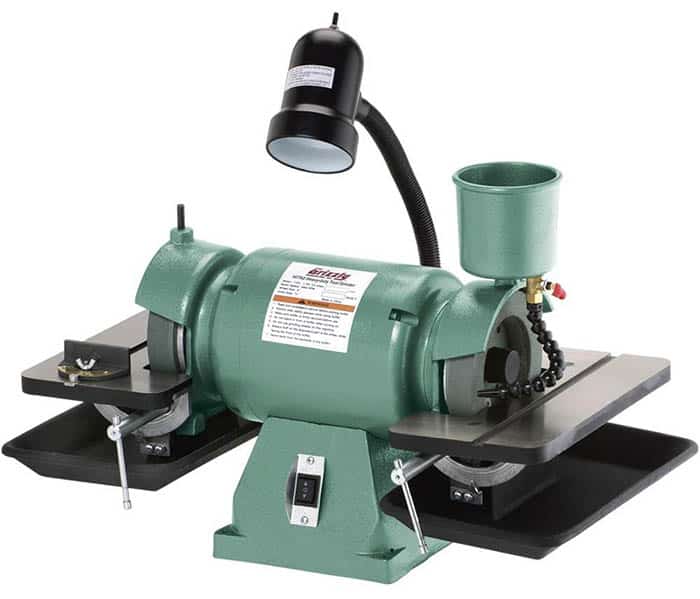 I’ve included some pictures and comments about accessories people have made for it as well: 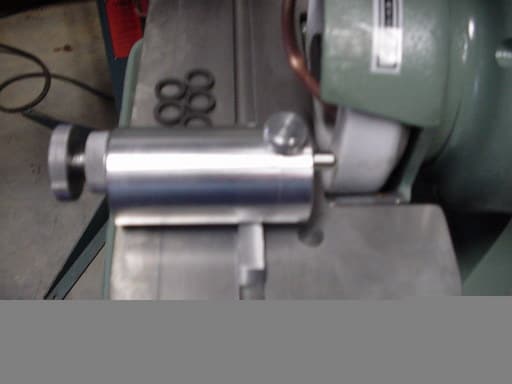 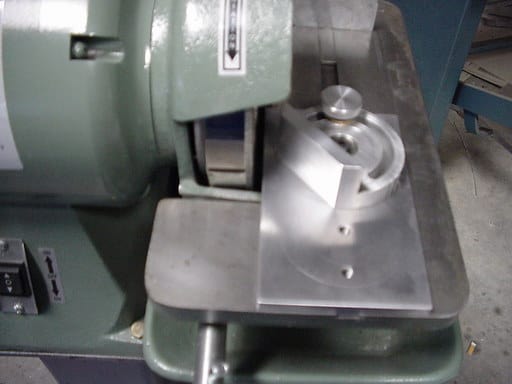 Diamond 220 grit from Enco: Got it just the other day!

Aluminum Oxide 46 Grit from J&L: I’m gonna run the wheels that came with the grinder for a little while and see how they do.

These are from Jim Hubbell. Balancing new wheels: 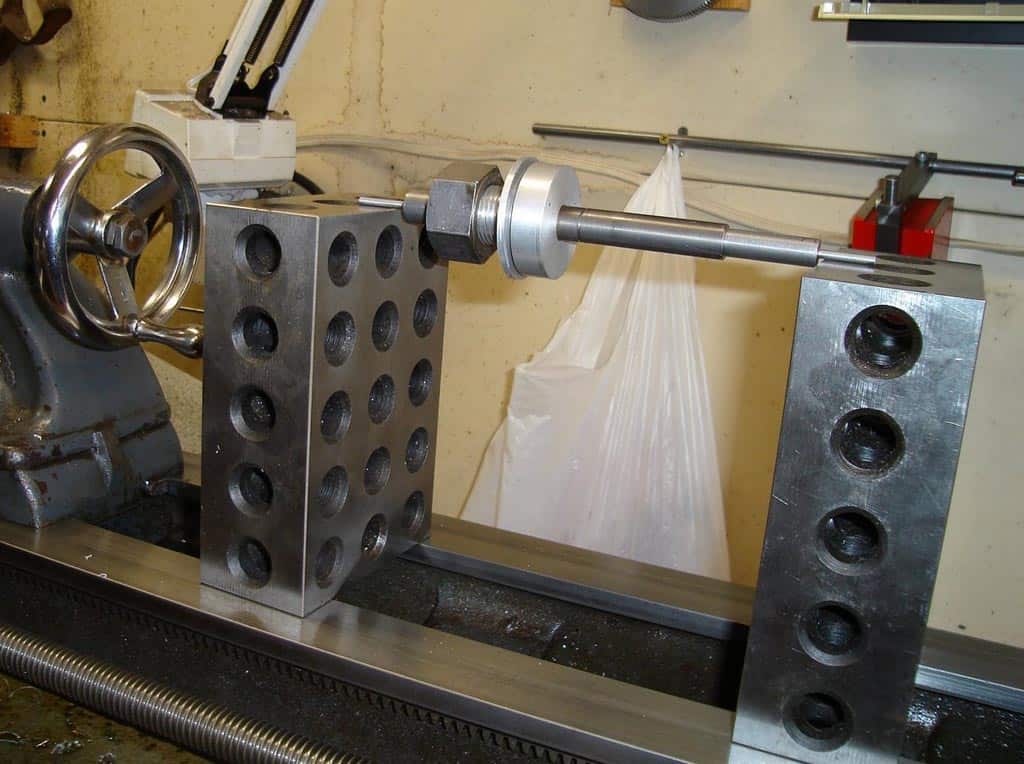 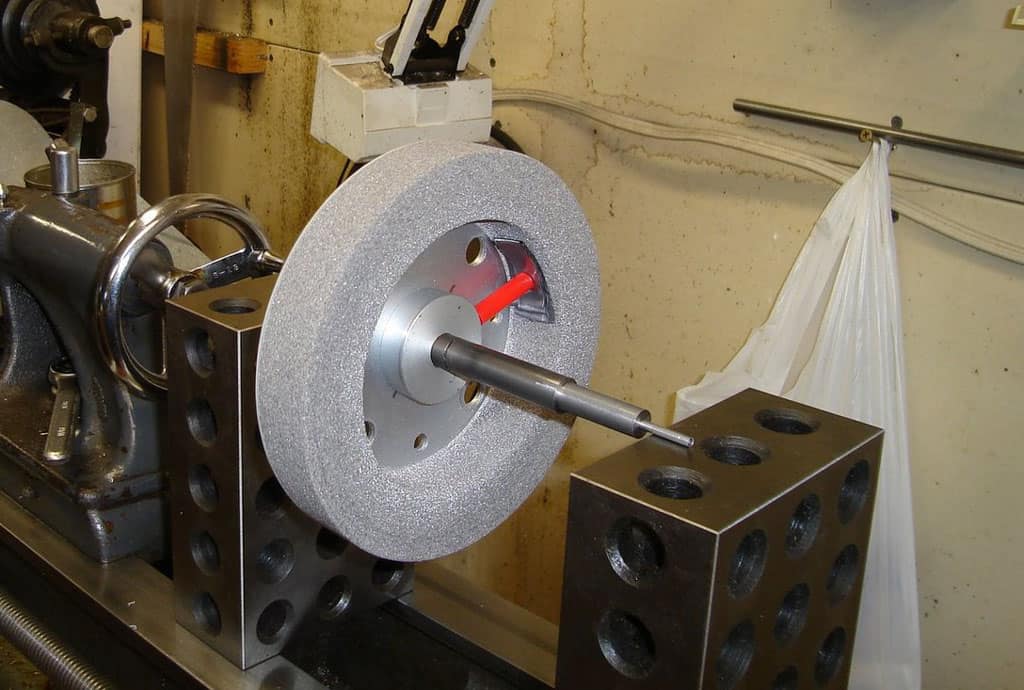 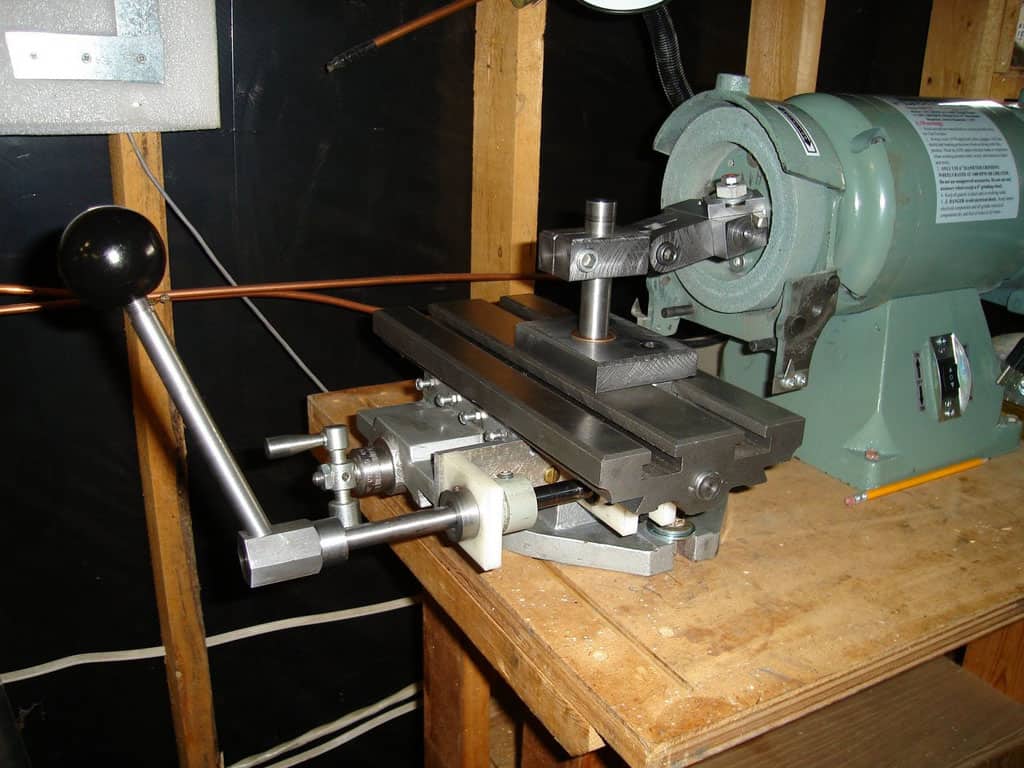 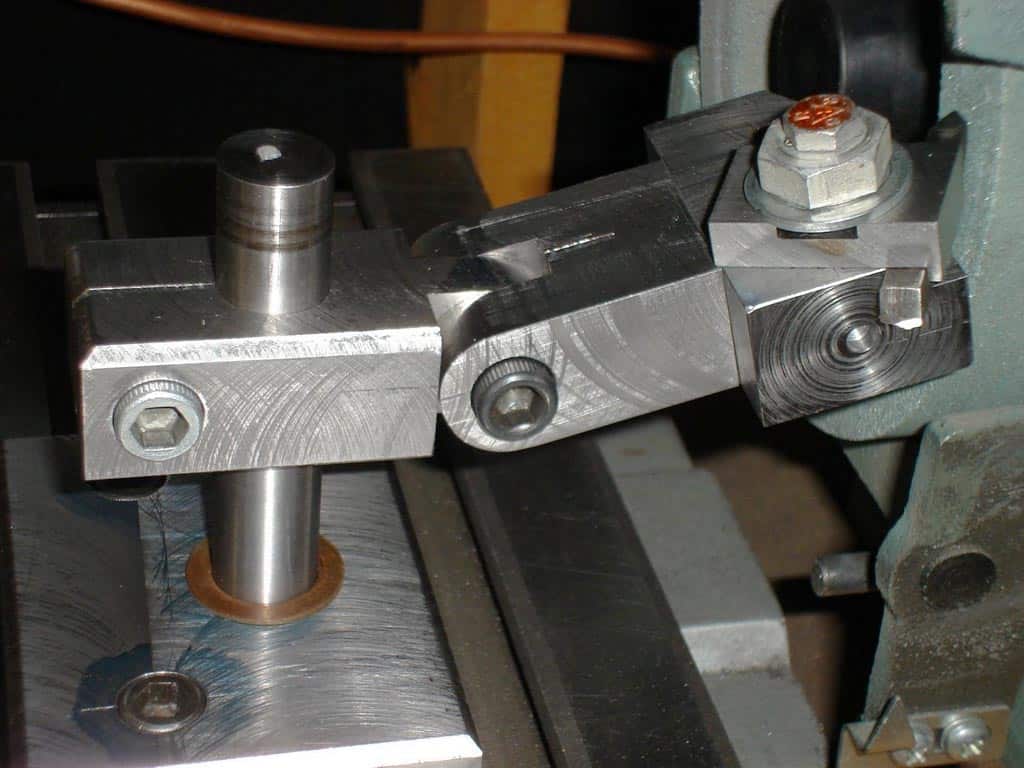 The Harbor Freight grinder is a nice tool to have around.  With the right accessories, you can sharpen drill bits and do a great job grinding manual turning tools.  But there’s a lot it can’t do too.  It won’t be too long before a machinist interested in tool grinding discovers “Single Lip Cutter Grinders”, which you can think of as V-Bit Grinders.  Deckel makes the iconic model of this machine, but there are many knock-offs.

This video gives a great introduction to this class of machine, how they work, and what they can do:

Types of work you can do with a single lip tool and cutter grinder:

Deckels have been widely copied in the Asian import market. I was watching some YouTube videos on how to use such a “clone” grinder when I got my inspiration. Watching those videos was very illuminating–it made it easy to understand how the Deckel-style grinders are used. But more importantly, it jogged my memory about a gadget I had sitting in the shop that I had not yet used: 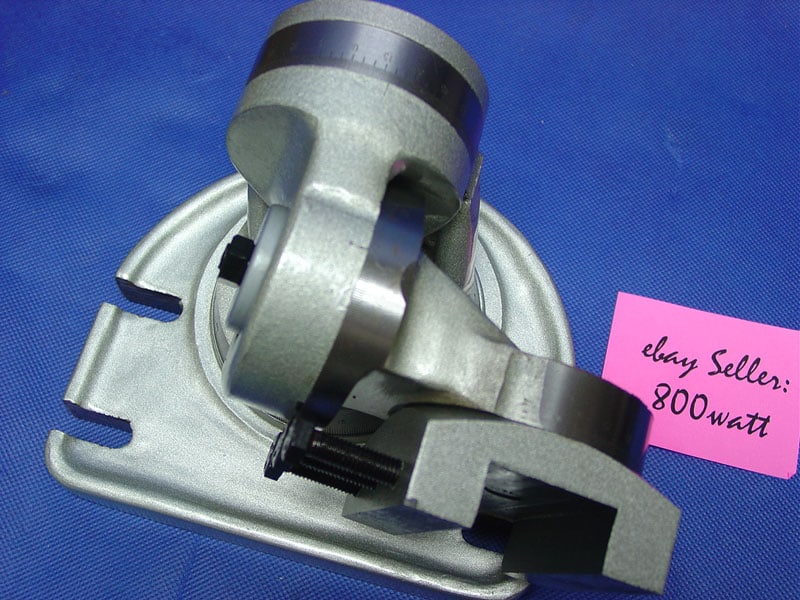 This is a universal vise that I purchased from eBay seller 800watt. They’re very inexpensive and seem well made. Also, I’ve bought a number of things from 800watt without any problems…

Based on the similarity of the universal vise to the tool holder on the T&C grinders, I came up with this idea to create an accessory for the lowly Harbor Freight Tool Grinder that would emulate the more sophisticated style. Here is what it looks like: 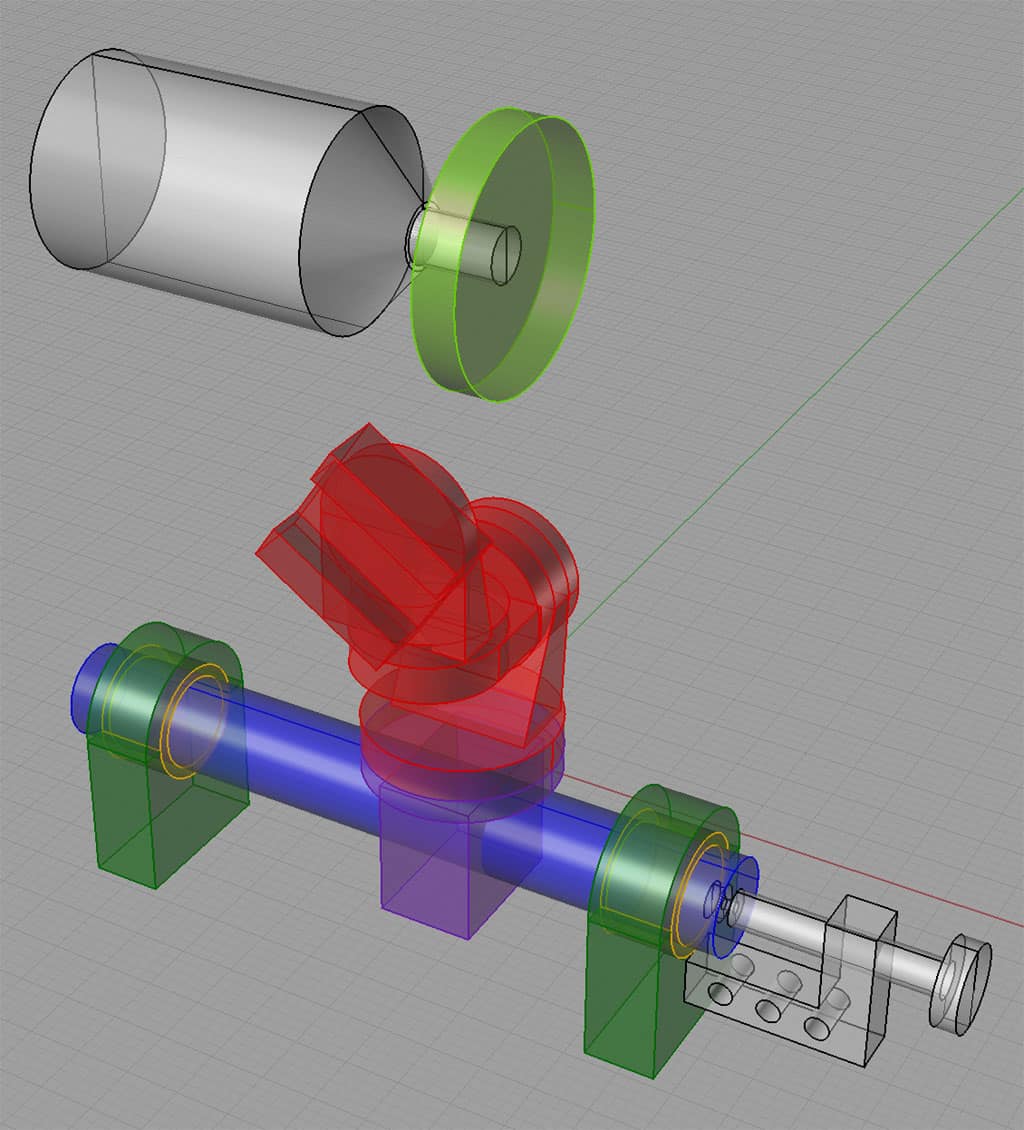 The universal vise is mounted to a precision rod that can pivot to stroke the tool against the grinding wheel. The universal vise allows precise control of the angle of the plane at which the tool which sweep the grinder face when the assembly is pivoted. The depth of cut is adjustable with the threaded rod that bears on the end of the shaft. The adjusting rod is mated to a ball bearing pressed into the shaft end. This way the shaft can be rotated for the tool grinding without turning the adjustment rod and move the tool holder left or right.

The shaft itself is held in bronze bushings. For endmill sharpening, one could mount a precision air bearing in the tool holder and go from there.

This sort of accessory looks relatively easy to build, and I don’t know why it wouldn’t be capable of results very similar to a commercial grinder.

As interesting as these machine’s are, they’re ultimately limited and also pretty darned expensive–about $1000 for a decent knock-off of the Deckel SO machine.  You can build attachments onto an inexpensive grinder, but you’ll still be limited by your machine’s geometry.

Single Lip Cutter Grinders are intriguing, but they still won’t sharpen an end mill.  To do that, you’re going to need a tool that has a lot fancier geometry and degrees of freedom.

Here are some notes on a variety of shopmade T&C grinders that I have collected as inspiration.

The Quorn is probably the most famous. It’s a beautifully intricate little machine: 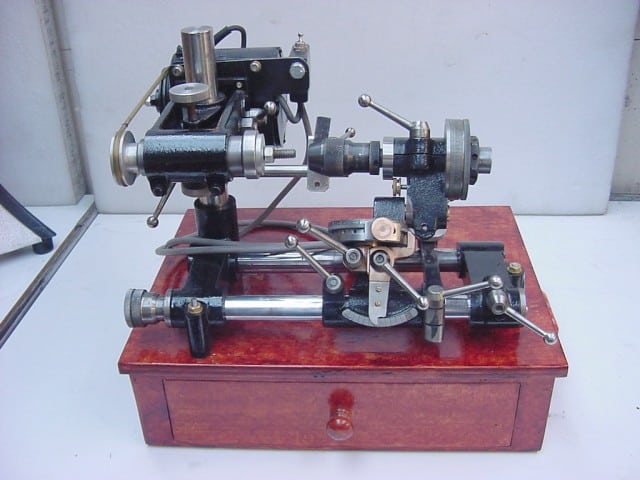 I have entertained the idea of CNC’ing up a Quorn out of bar stock, and I am sure it would be a fascinating project, but there are simpler tool and cutter grinder designs to get the job done.

I recently came upon a tool grinder called the Tinker: 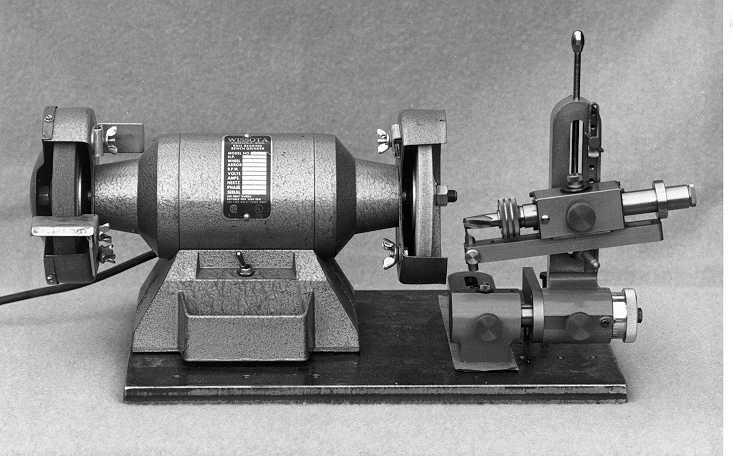 The Tinker Tool and Cutter Grinder by Guy Lautard…

This design is by N.W. Tinker, with plans by Guy Lautard and more information about it on his site. His Machinist’s Bedside Reader series is excellent, so I know that what he is offering is likely of extremely high quality and would be worth the price of admission. I quite like the Tinker design. It looks much simpler to build than a Quorn, and I like the idea of harnessing it to an existing grinder rather than having to fabricate a whole new grinding spindle for the machine. It seems to me that doing double duty with the grinder not only saves fabrication time, but also saves space in what will be an already over-crowded workshop for most folks. Here is another Tinker article with a lot of good pictures.

There is also a simpler variant called a Mini-Tinker, and supposedly a design known as the Raymac may be even more capable than the Tinker. 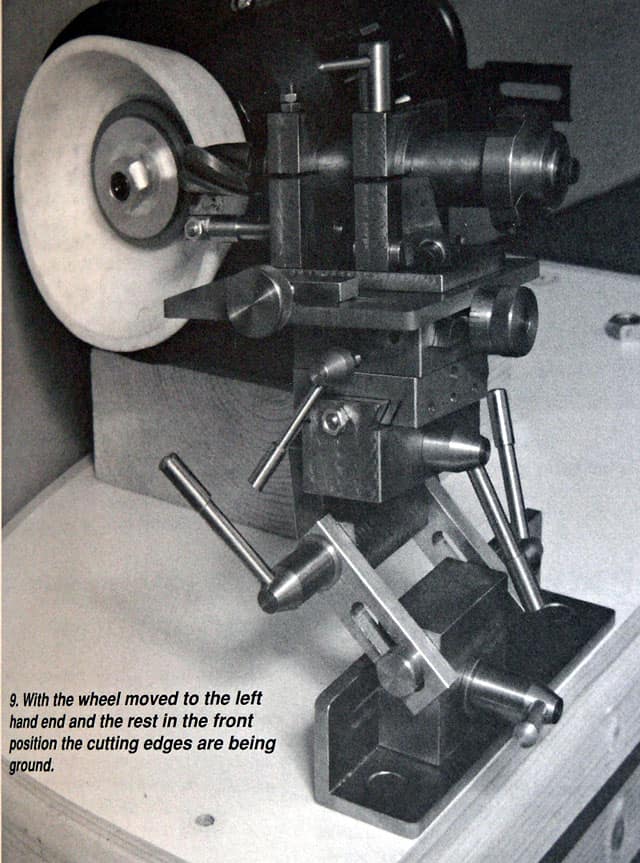 Hall’s Sharpener from the Workshop Series, “A Complete Milling Course”… 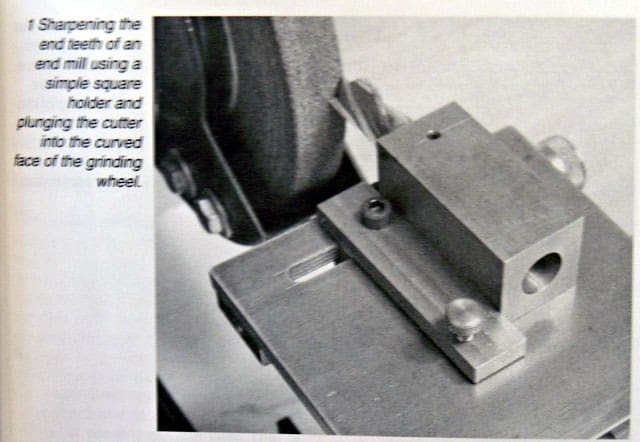 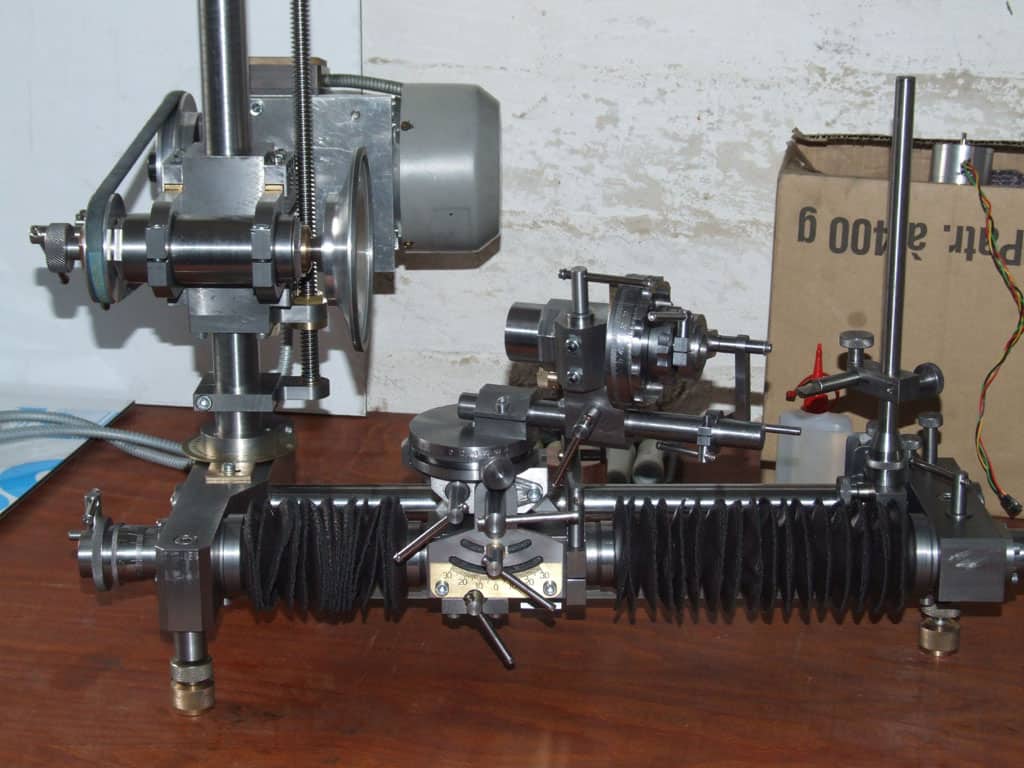 This one is a Bonelle… 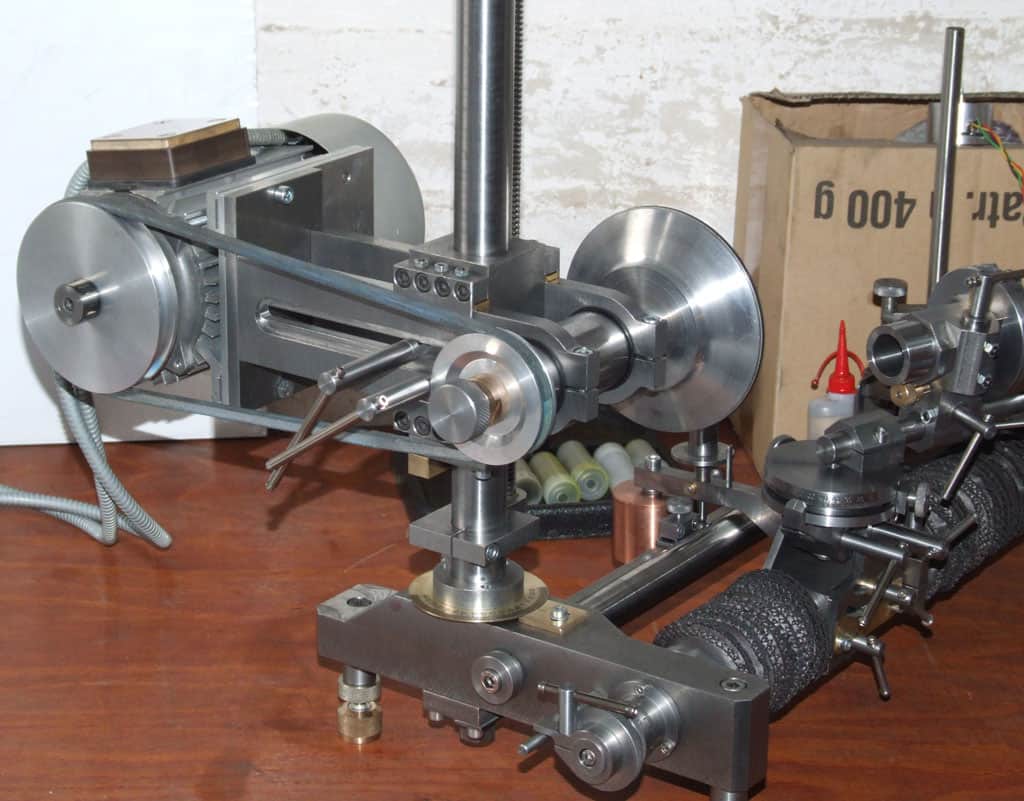 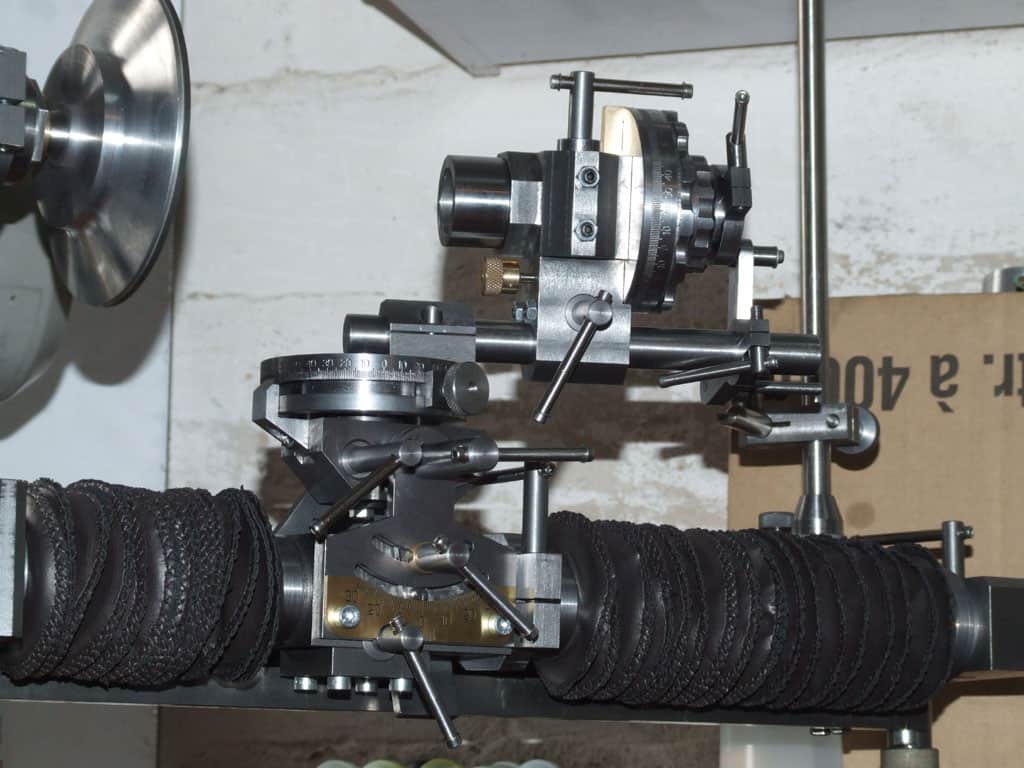 Imagine a Tool and Cutter Grinder capable of sharpening any tool under full CNC control.  At this scale, cutter grinding involves relatively small workpieces, so a giant machine is not called for.  Perhaps even a small hobby CNC machine would be able to do this kind of work with a high degree of success.

I’ve become intrigued with the idea of building a small CNC Tool and Cutter Grinder based on a Sieg X2 mill. The X2’s are cool little machines, and they seem to be quite capable with a little work.

Various folks like Hoss from Hossmachine and others have done a little tool grinding on their X2’s:

The Seminal Question: How Many Axes?

We will certainly want to CNC the normal 3 axes of the Sieg mini-mill. But how many more axes are needed? One sees 4, 5, and even 6 axis tool grinders. At the very least, we need a 4th axis. That axis would be used to follow the helix of a drill bit or milling cutter. That 4th axis is rotary and can be parallel to either X or Y, but given the shape of the machine, it seems that balance might be better if it is parallel to X. I would envision mounting a CNC’d spindexer there, because they’re compact and inexpensive to CNC.

A 5th rotary axis is optional, but would parallel the Z. Such an axis is very useful for putting a radius on the end of an endmill or for smoothly contouring a form tool. Imagine the spindexer 4th axis sitting on top of a CNC’d rotary table that sits flat on the mill’s table and you get the idea. Ideally we would like to be able to pivot the spindex off the horizontal for some work, perhaps sharpening a tapered cutter, but that pivot need not be CNC’d.

This diagram shows the axes: 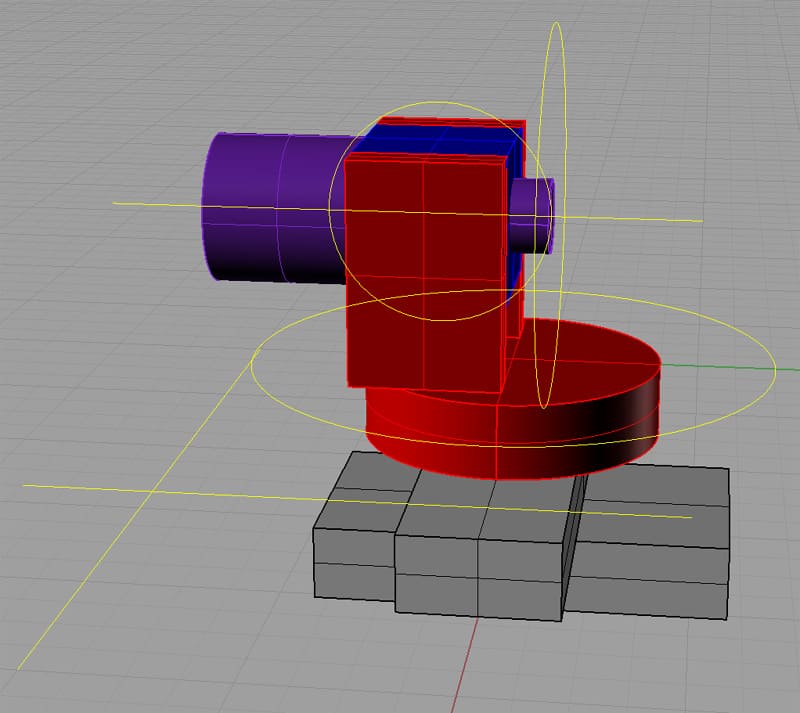 4 of the 5 CNC’d axes, plus a manual tilt axis. The gray represents the milling X and Y axis or the table and saddle. 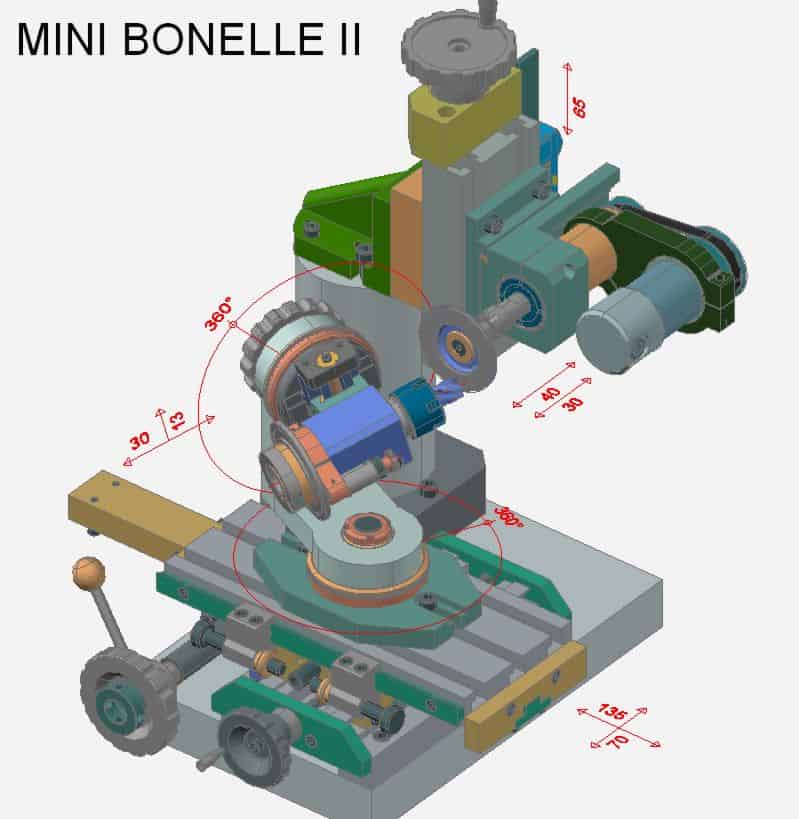 This is the one that finally inspired me to think in Mini-Mill terms. From the great German Metallmodellbau site… 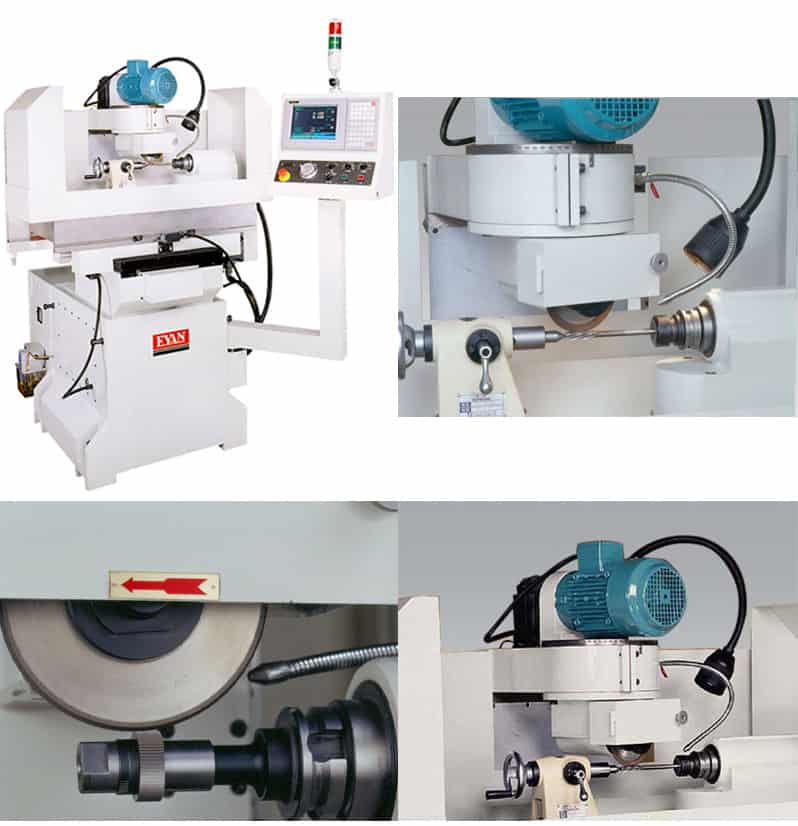 Here is a compact industrial machine. Note the axes. Looks like a normal 3 axis mill with a head that rotates in the Z axis. It also needs to rotate the tool’s axis to follow helixes… 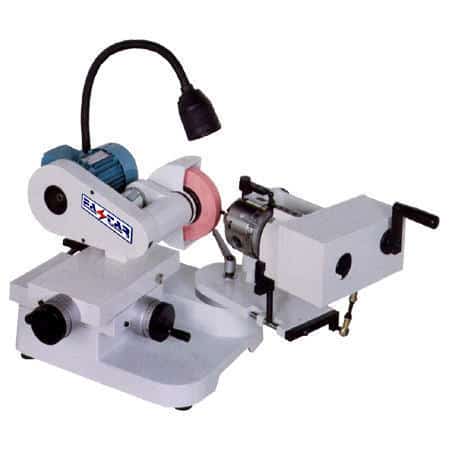 Small machine, not CNC. Again, note the axes. Z, tool axis, in and out, and looks like a tilt rotary axis… 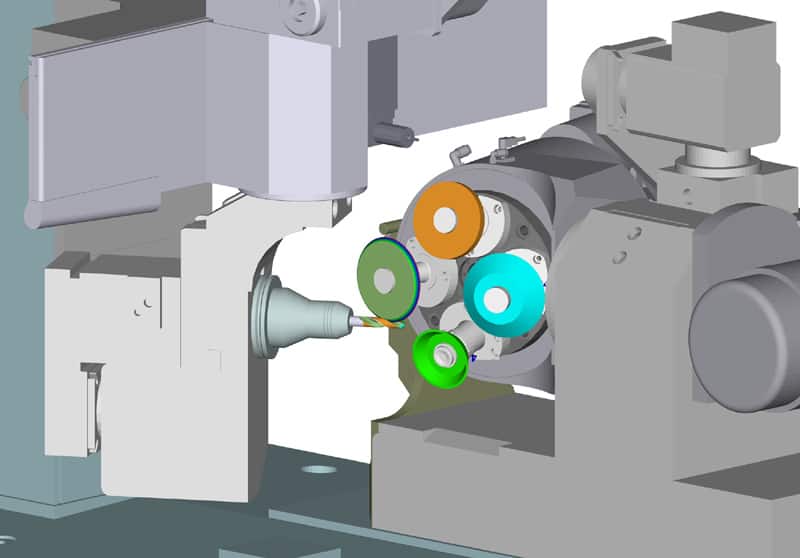 Simulated view of a commercial CNC T&C grinder. Gives a nice idea of the axes (this looks like a 5 axis) as well as the grinding wheel shapes that are useful… 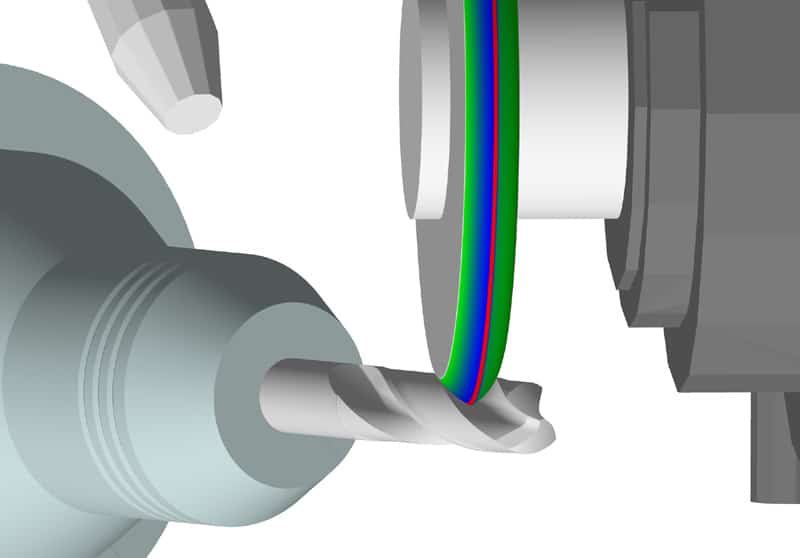 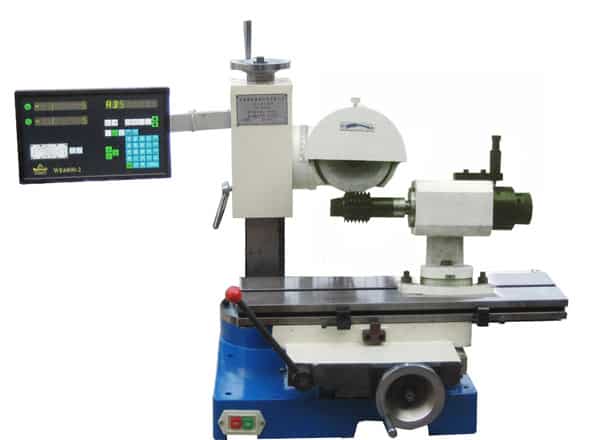 X, Y, and Z. Not much is motorized. I’d assume the controls are more for a DRO than CNC. Spindexer-style tool holder with 3 rotary axes of freedom… 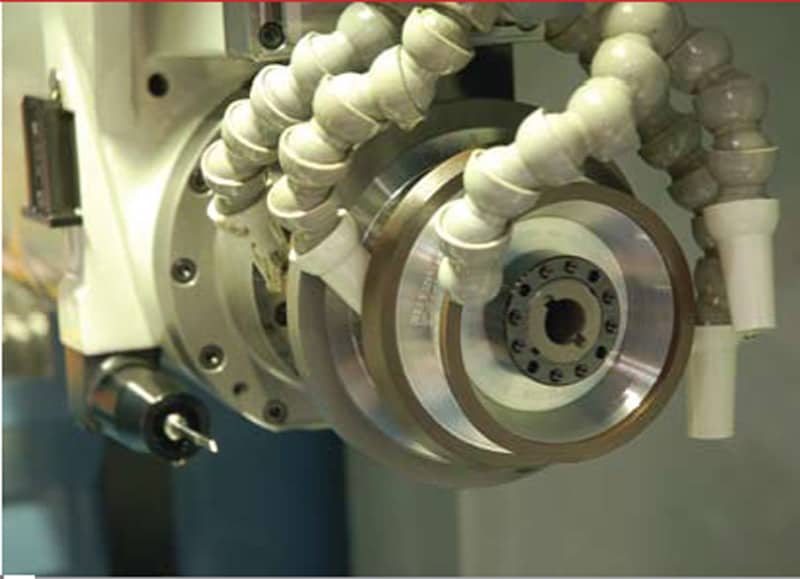 The equivalent of gang tooling for a T&C grinder. Cool! 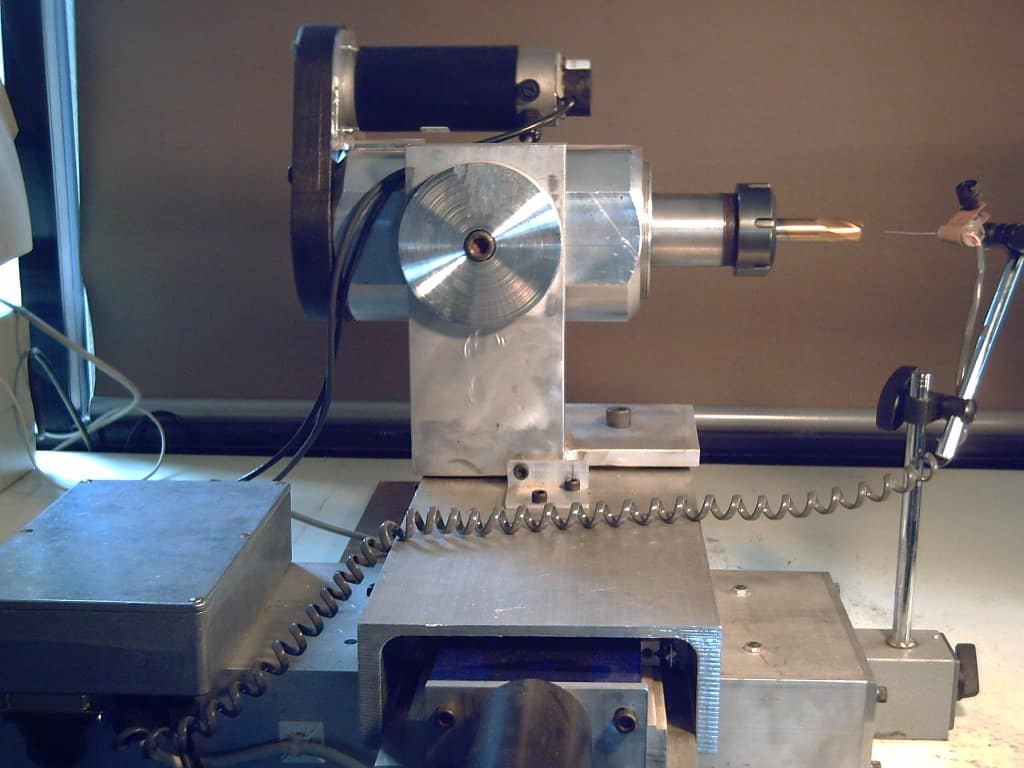 An add-on CNC T&C attachment for manual T&C grinders. There are 3 axes: X, Y, and a rotary for following the helix. This unit is very similar to the CNC’d spindexer I envision… 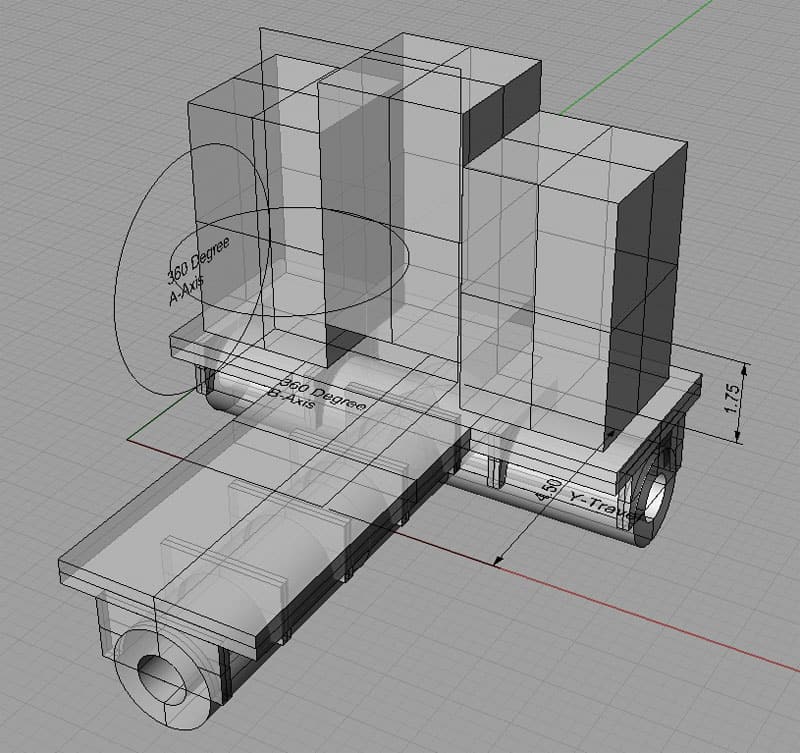 Anca: Very high tech Australian machines with direct drive and polymer granite bases. Be sure to check out their technology brochure.