What if Porsche Made CNC Machining Centers? 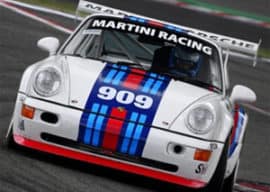 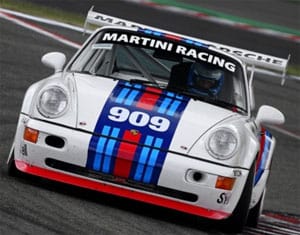 I was recently contacted by the West Coast Office of Datron Dynamics.  It seems they were interested in getting G-Wizard Calculator into the hands of their customers.  Their machines are, to use their word, Unconventional.  For one thing, they all have very high speed spindles, which makes Feeds and Speeds problematic.  Even if you’re an old hand running the usual VMC’s found in manufacturers, very few will have had experience above, say, 15000 rpm.  This is the realm of High Speed Machining.  Suffice it to say that G-Wizard worked great for their customer.  They were able to get good results easily and with little to no training.  Never being one to miss an opportunity, I stepped up and asked if I could come visit and see the Datron’s in action.  Here I have a confession to make–I’ve been drooling over their videos of high speed machining for some time and was very excited to make the field trip and see them first hand.

Let’s get back to our Porsche analogy.  If Porsche were to build machining centers, what would they be like?  For starters, they’d be German Engineered, just like Datron.  Natch.  But I think they’d also adhere to Datron’s focus on being unconventional:

Porsche has always been a little bit different.  Their engines were air-cooled for a long time when others were water-cooled.  Turbo charging is something they delved into early on.  The 911 was rear engined instead of being mid-engined.  Six cylinders instead of 8 or 12.  A flat boxer design instead of a Vee.  The list goes on, and so it is with Datron.  Consider these unique features:

–  Gantry design instead of the more conventional mill arrangement.

–  Granite or polymer concrete base instead of cast iron.  It looks like a big surface plate sitting there.

–  Ethanol spray for coolant instead of more conventional coolants.  The parts come off the machine dry and very clean.  In fact they are sterile, which is a big plus for the medical industry, one of their big focuses.

–  High Speed Machining to the core.  The spindles on these machines go to as much as 60,000 rpm.

–  Custom tooling and workholding solutions optimized for the machines.

–  Custom Windows-based controller with a number of very slick enhancements over conventional CNC controls that I’ll talk about in a moment.

These are just a few of the things I noticed during my visit, I’m sure the Datron people could go on at much greater length about what makes their machines special, but you get the idea.

The West Coast office had two machines on the floor.  Let’s start with the one we spent the least time on, which is called a D5.  It’s been purpose-built for the dental market and is absolutely loaded with time-saving technology.  First up is the front panel: 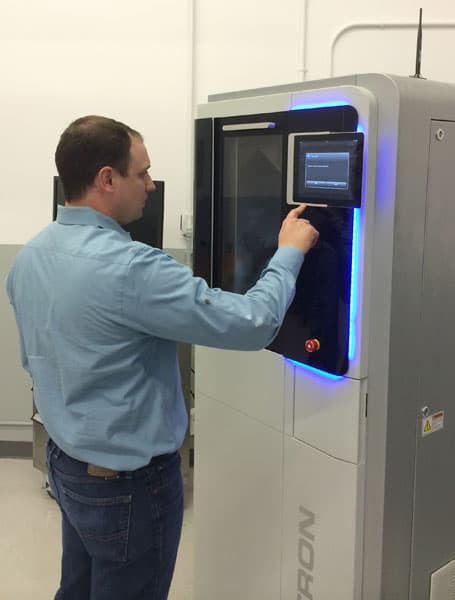 Chris fires up the Datron D5…

I don’t know if you can tell, but the front panel is actually an Apple iPad.  It’s been optimized for the Dental audience.  You can even pop it out of the dock and take it with you to your desk to monitor what the machine is doing.  A GoPro camera can be mounted inside the cabinet to show live video of what’s happening.  This machine takes pallets that they call “pucks”, because they’re round.  You can load it with up to 8 pucks and each puck can do 3 dental implants.  The machine has full 5-Axis capability, a toolchanger, and (of course!) a very high speed spindle.  It’s quite a little power house and extremely compact.  I could see these things grinding out all sorts of small parts all day long if you were so minded.

The second machine on the floor is called an “M8 Cube”.  This is the Dream Machine for all you wanna-be Tony Stark Ironman types out there.  The perfect tool to prototype anything in record time.  It is extremely popular with various companies who prototype consumer electronics and a variety of other products. 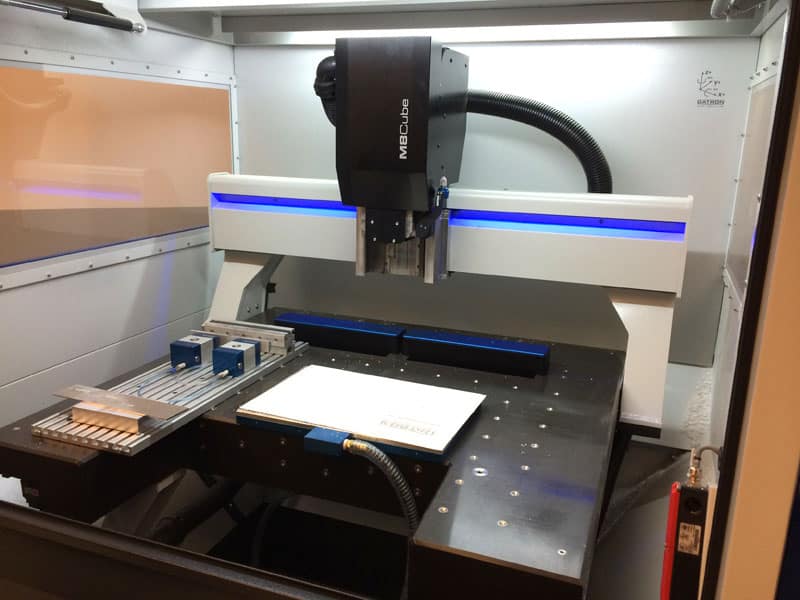 The big polymer concrete table is clearly visible.  I love how the front opens to make accessing every part of it easy.  A couple of things to note about the table.  First, the area is huge–much larger than the average VMC table, for example.  If you need to lay out a lot of parts or perhaps do a part that is large in X and Y, that’s possible.  Second, it’s hard to see, but the inset threaded inserts used to mount fixtures extends down into the cutout in the middle of the table.  This is so you can stand tall parts on end (just like the Old School guys did on their Bridgeports) to machine them.  Below the table is a big chip tray that rolls out for easy access.  Plus, it’s easy to keep the machine clean because the chips are dry.  The ethanol coolant makes an excellent degreaser, and it evaporates so no need to clean it up.

The high speed spindle is on top, and they’re hard to see here, but there are two blue lid boxes directly under the gantry that hold the tools for tool changing.  The lids pivot up, the gantry positions over the desired tool, and picks it right up.  I love that blue LED lighting on the gantry.  It changes to green or red to indicate what mode the machine is in.  Very stylish, but then, if you’re Tony Stark, you’d like to have a little style: 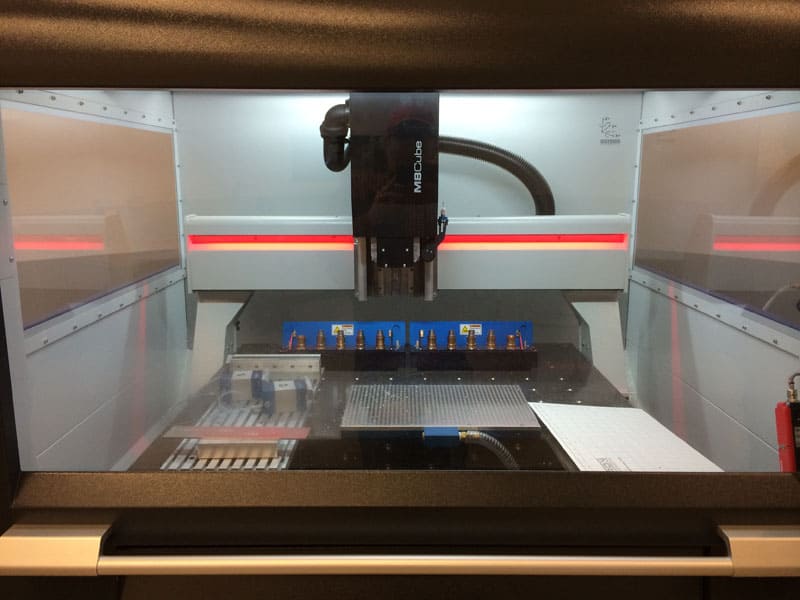 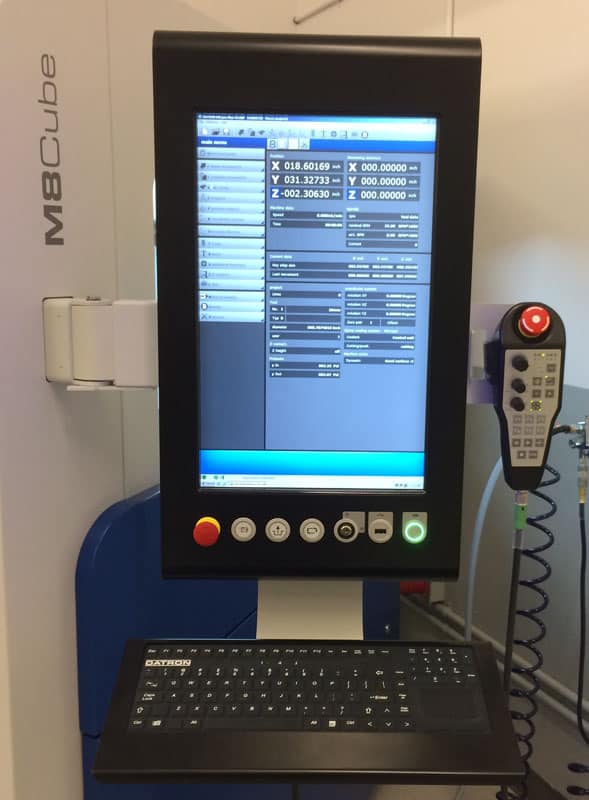 It’s a Windows-based controller with software written by Datron.  Very tasteful UI.  The panel is in portrait mode (tall and skinny) to show as many lines of g-code as possible.  That’s very important given how fast they scroll by when the machine is running.  You need to see a lot of them if you’re looking for something specific that’s coming up!

You can install other software on the control to assist.  For example, we talked about putting G-Wizard on the control.  The big screen is also fully touch-sensitive.  There’s a couple of other very unconventional features that are extremely slick.

First, there are two languages available.  One is the familiar g-code.  The other is a very high level and easy to program conversational language.  You can use this language by itself to do things on the machine, but where it really shines is as the “glue” that ties together blocks of g-code.  For example, we machined a quadcopter mold (more below), and the conversational language was used to customize some of the operations.  We chose not to do an engraving step, for example.  This language has the ability to put up menus and interact with the operator, so it becomes possible to create a completely customized program for some particular application.  For example, their Dental machines.  They’ve got customers that have automated the manufacturing line end to end with these facilities.  Orders come in via the Internet and can be directly processed on the machines.

The second feature is also cool for a gearhead like me.  You have the ability to change the acceleration curves on the machine either from the panel or under control of the conversational language: 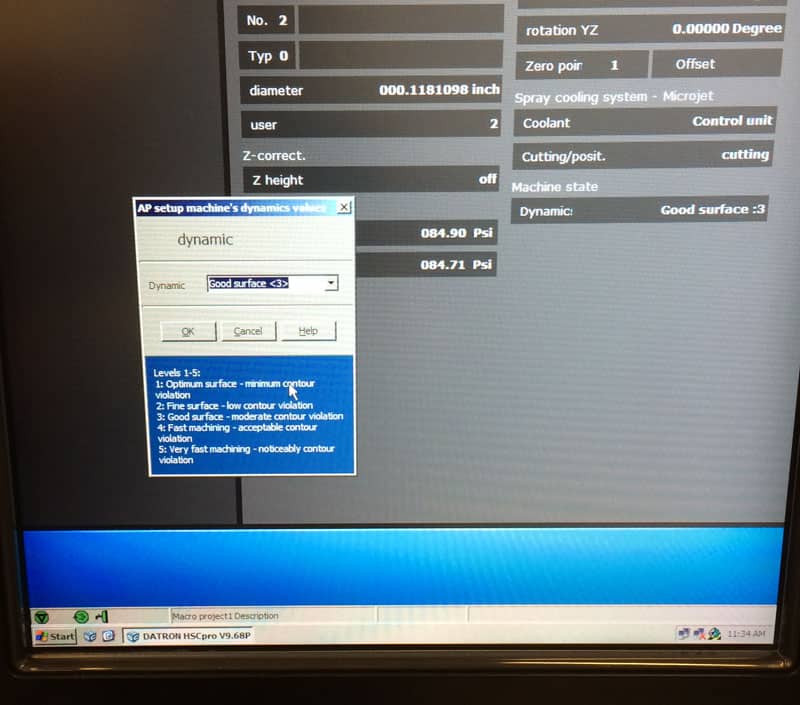 Contour Dynamics:  Do you want a comfortable ride, sporty, or full race?

The ability to control the machine’s contour dynamics is a bit like the ride control on a modern high performance car’s suspension:  o you want a comfortable ride, sporty, or full race?  There are 5 levels.  Level 1 produces the most accurate contours and the best surface finish.  Level 5 gets the work roughed out in the shortest possible time.  These options can really speed up your roughing passes as well as making your finish passes produce an extremely fine surface finish.  The part we made came off with a mirror finish in the aluminum straight off the machine–almost no visible tooling marks except from the bottom of the tool in large flat areas, and even those were very minimal.

Of course a machine like this is going to do something special for both toolholding and workholding.  The tools are held in HSK 25 holders, but the collets are a special Schunk design called “Tribos.”  They grip the tool very tightly on 3 points on the shank, and so therefore the runout is very low.  Low runout is critical with small tools and high rpms.  Schunk claims a few microns (0.003mm) of runout.  Installing a tool in the holder is quick and easy, but requires this gadget: 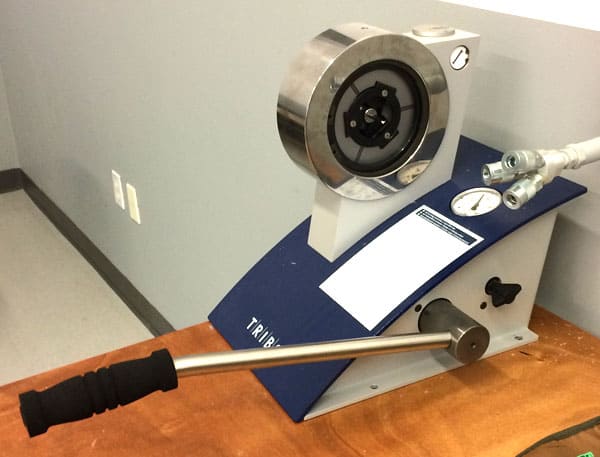 Gripping force on the Tribos system is 180 atmospheres!

The gripping force on the Tribos system is 180 atmospheres–that’s equivalent to pressures found not quite 6000 feet under the sea.  Also German-made, of course!

Workholding is equally unconventional for this machine.  There’s a special “vise” and a vacuum table.  Here is the vise: 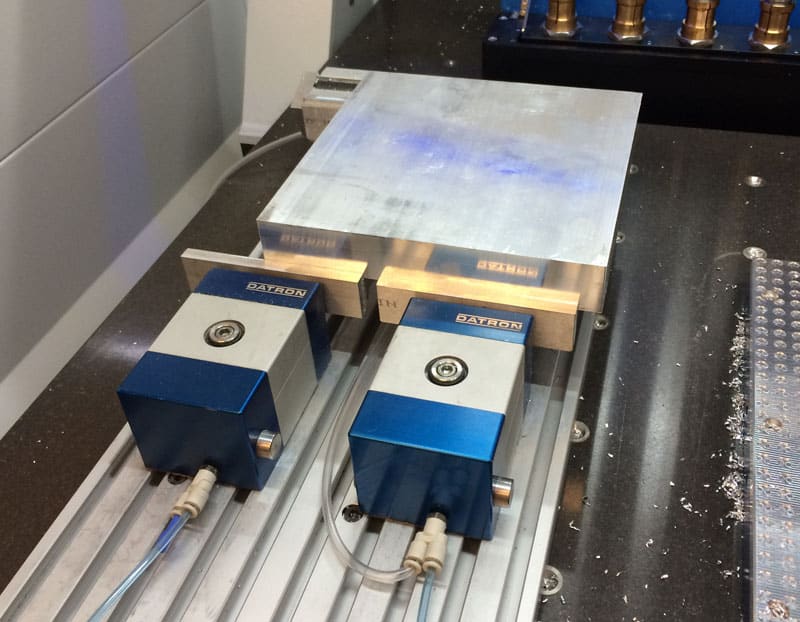 Using the vise is quick and easy.  Press a button on the side of the clamping block and you can slide it in the T-slots.  Release the button then press a second button to fire the air-clamp.  Done!  No spinning a screw to move the jaws a long distance, this is much faster.

Something that’s important to know is that the high speed spindle and smaller tools on the Datron produce very little cutting force.  This means that workholding can be faster, simpler, and easier.  Custom fixtures can be positioned on the vacuum table which can then act as a sort of pallet changer.

Okay, Enough.  What’ll She Do?

Here is their table of sample parts from the front office: 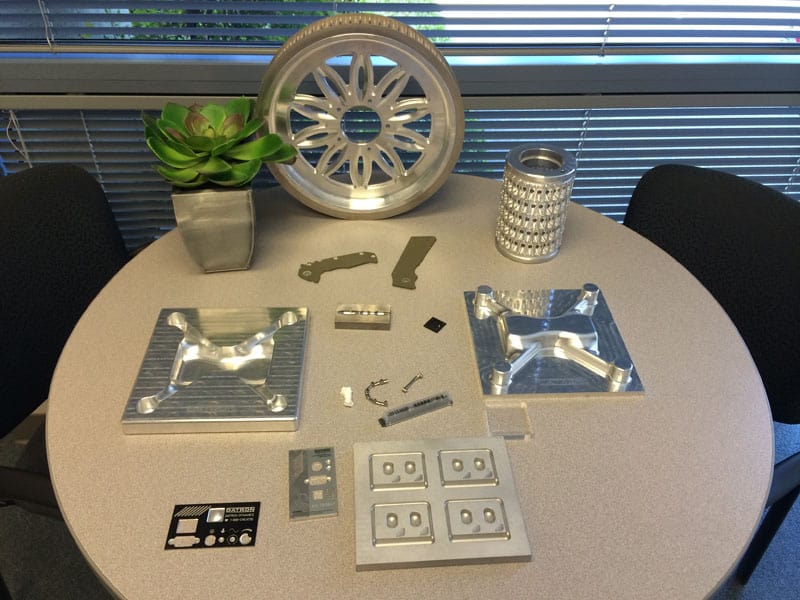 They were all intricate and finally finished.  There were a lot of other samples, some of which I was not allowed to photograph, but all were very neat.  There were tiny little holes drilled in grids deep through aluminum.  There were engravings.  And there were many molds.  Datron specializes in Aerospace, Medical, Electronics, Firearms, and many other markets that need the specialized talents of these machines.

The two piece mold in the middle is for a quadcopter, and we made the mold part on the right while I was there.  It was done in three passes.  There was a roughing pass (layer cake style for 3D) that used a 20mm “Face” mill with 2 inserts.  That was followed by a semi-finish and then a finish pass with a 6mm single flute ballnosed endmill.  The single flutes give a much better finish than multiple flutes and the very high speed spindles mean the job can still be finished very quickly.  That part we made took just less than 1 hour.  I’ve got some videos, but be warned the videos don’t really capture the live experience.  The chips hit the front window like hail and the cutter moves through the aluminum almost like it isn’t even there.

The Roughing Pass video shows a tool change and the integrated probing routine.  The roughing pass took very little time to do the “layer cake” roughing on the workpiece.  Next up was a semi-finish pass, followed by this finish pass:

The finish coming off the machine was a mirror finish.  I saw sample acrylic parts that had freshly machined sides that were completely transparent.  You gotta love the high speed spindles and single flute ballnoses for the quality of their surface finish if nothing else.

I want one.  Well of course, who wouldn’t!  To reach this goal, CNCCookbook will have to sell a great many G-Wizard Calculators and Editors to pull that off though.  Hopefully I can count on your support.  In fact we’re even running a sale as I write this, and I will shamelessly promote it in hopes of having another go with one of these fine German CNC machines.  It’s for a good toy, um cause, yes, I mean cause.  Really it is!