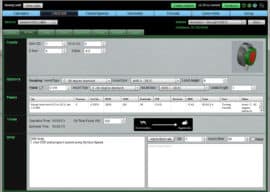 1.  They’re faster and simpler.  You have to tell the CADCAM Wizards a lot less information to get back an answer.  The information they use and provide is much closer to what your CAM software needs than just raw rpm and feedrate.

2.  They more optimal.  CADCAM Wizards uses some of the most sophisticated algorithms in the business together with the G-Wizard Feeds and Speeds engine to calculate a bunch of scenarios and pick the one best suited to your application.  It would take you almost forever to try as many different combinations of variables in as clever a way as the CADCAM Wizards do.

3.  CADCAM Wizards can be easily converted into an estimate for quotation via CADCAM Estimator.

Let’s go through these new turning wizards and see how they work.

How do I figure out the depth of cut for a boring operation?  What should the feeds and speeds be for my boring bar?  These are the kinds of questions the ID Turn Wizard is designed to answer. 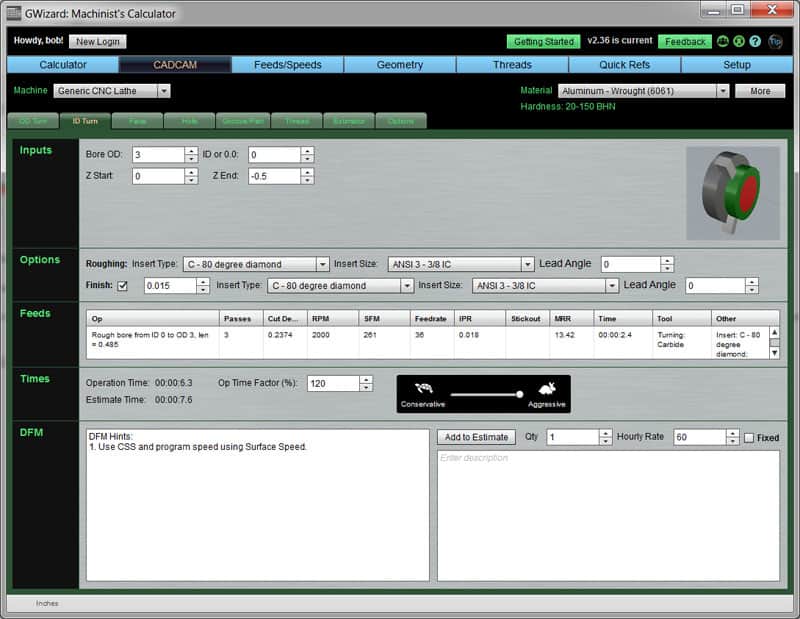 To use ID Turn, make sure the correct Machine and Material are selected then just give it the Bore ID and OD (e.g. the material to be removed with the boring bar) and the Z Start and Z End, which establish where to start cutting the bore and where the cutting ends.  That’s all there is to it.

The roughing and finishing tool are defaulted from the “Options” tab.  Set them up once for the tooling you commonly use.  You can change them if needed on a particular operation.  A Finish pass is assumed, but you can turn it off or establish a different allowance for the Finish pass.

That’s all there is to it.  In exchange, the ID Turn Wizard gives a “recipe” for the job where it says “Feeds”.  There’s an entry for Roughing that captures all the information, and tells depth of cut (0.2374″), speeds (2000 rpm / 261 ipm), feeds (36 ipm / 0.018 IPR), number of passes needed for roughing (3), what tool and insert to use, and so on.  In addition, there is full cycle time estimation information such as MRR, Time for Op, “Estimate” time which adds a variable amount (it’s 120% of the estimated op time) as a fudge factor, and so on.  You can vary the aggressiveness with the usual Tortoise-Hare slider.

Of interest is the DFM Hints.  In this case, it is suggesting you be sure to use CSS (Constant Surface Speed) programming rather than the rpms.  This is a good idea for a range of diameters from ID to OD as you can use more rpm at smaller diameters.

Lastly, you can grab the Feeds and Speeds recipe and add it to an Estimate that you have in progress with CADCAM Estimator using the controls in the lower right corner.  There’s room to add a description of what this particular op is, increase quantity, and set an hourly billing rate for this kind of work.

Like OD Turning and ID Turning, Facing is an extremely common operation on lathes.  The questions involved are pretty similar too, such as how do I figure out the depth of cut for a facing operation?

The Facing Wizard is very similar to ID Turn: 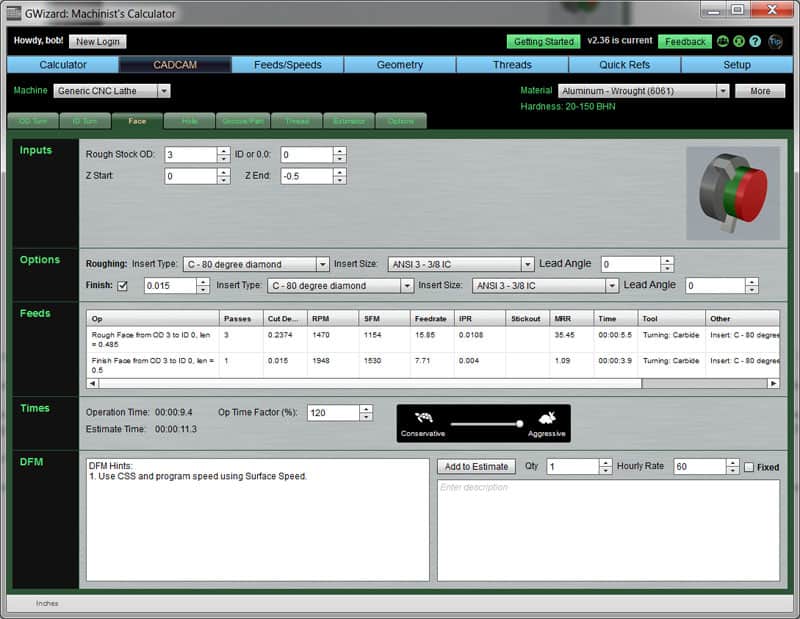 The Facing CADCAM Wizard is very similar to ID Turning…

Once again, very simple to use.  Enter OD and ID (you may not face to 0 if there is a bore there, for example), same options for roughing and finishing tools, and you get back a Feeds and Speeds recipe just like before.

These Wizards can save a lot of time versus the conventional Feeds and Speeds Calculator, and they make it easy to cost estimate a Turning job.  If you haven’t played with G-Wizard Calculator yet, there’s a free 30-day trial available.  Give it a shot, it might be just the thing to save you time and money.