Gun Drilling & BTA Drilling:  These are the right tools when you absolutely positively have to drill a hole as deep as possible.  “Deep” is defined by drill diameters. 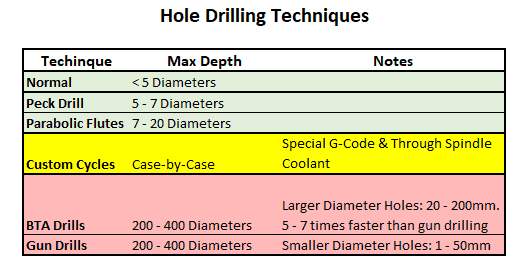 While we can use special g-code such as the Conversational Programming of G-Wizard Editor to extend the reach beyond Parabolic Flute Drills and Peck Drilling, to go really deep takes even more specialized tooling.

Typically, Gun Drilling and BTA Drilling are done on special deep hole drilling machines that are designed for the purpose.  Such machines are capable of contra-rotating both the cutting tool (Gun Drill or BTA Drill) and the workpiece, which gives the best results.

Gun drilling can also be done on a lathe, but the disadvantage is that the lathe can only rotate the workpiece and not the gun drill at the same time.

What is Gun Drilling?

Gun Drilling got the name because it was originally created to help make straighter more accurate gun barrels. 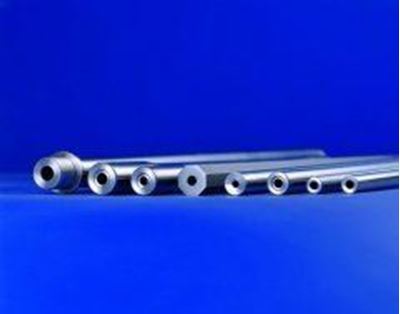 It uses a fairly simple geometry that pumps fluid through the core of the tool to flush chips from the tip back out through generous straight flutes:

When to Consider Gun Drilling

Gun Drilling is the process of choice when:

Sometimes even relatively shallow holes (by gun drill standards) benefit from gun drilling when straightness, diameter, and surface finish requirements are high.  The hole size, finish, and straightness of a gun drilled hole are all higher than with twist drilling, so eliminate a second reaming or honing op via gun drilling may save time.

Gun Drilling on a Lathe

Contra-rotating tool and workpiece contributes to straighter holes.  Dedicated deep hole drilling machines also have more sophisticating monitoring of loads and coolant pressures that correctly identify when the tool is dulling and needs to be changed.

Anthony Fettig, CEO of UNISIG, says the dividing line is at about a 40:1 diameter ratio.  That’s the point where purpose-built deep hole drilling machines start to have a significant performance advantage over using gun drills on conventional lathes and milling centers.

Even so, gun drilling on an ordinary lathe can still be effective.  Here’s a gun drill in operation on a manual engine lathe with just a mist cooling unit: 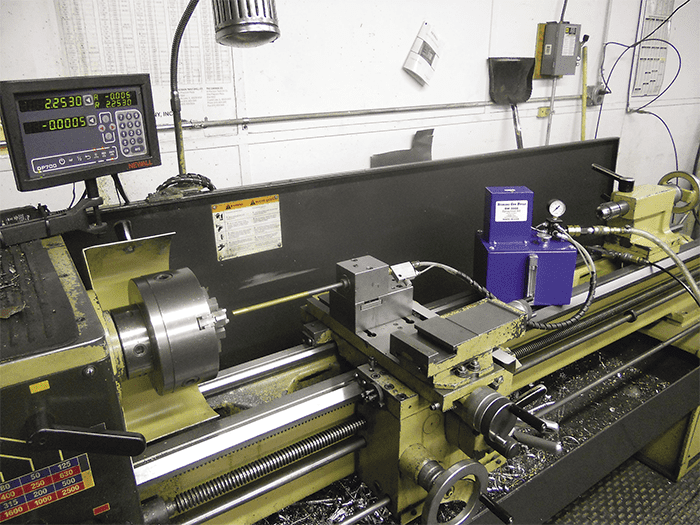 Given that whipping can create a real safety hazard as well as completely destroying the gun drill, some important procedures must be followed when gun drilling on lathes without whipping guards:

Gun Drills are happier with cutting oil than typical water soluble coolant used with CNC.  Keep the coolant temps below 80 degrees F so you don’t lose viscosity on the oil.

Another area to fine tune for your particular application is the nose grind or geometry.  If not specified, most gun drills have a N-8 nose grind and R1 relief.  This is fine for steel or inconel.  But, in the case of aluminum or brass, you’re better off with an N-4 nose grind and R4 relief.  Consult your gun drill manufacturer for best results as they’re the experts.

Our G-Wizard Feeds and Speeds Calculator will figure Gun Drill feeds and speeds: 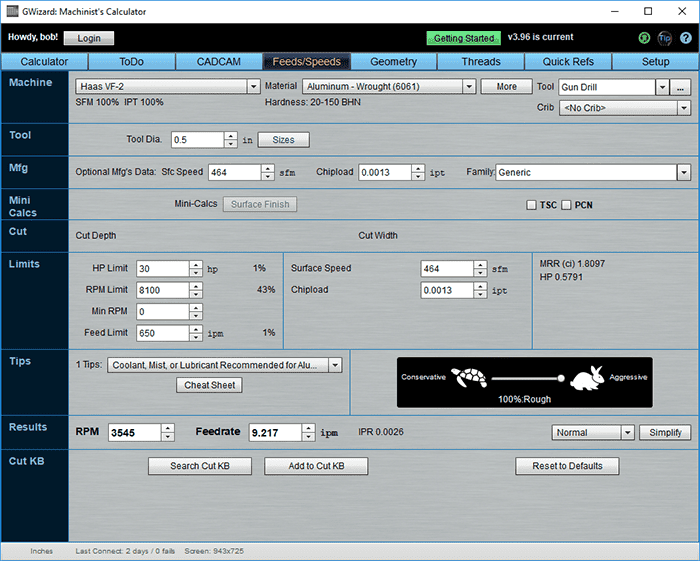 What is BTA Drilling?

There are several differences that separate BTA Drilling from Gun Drilling:

BTA stands for Boring and Trepanning Association.  BTA Drilling can achieve feedrates that are 5-7 times that of Gun Drilling, hence it can be a lot faster.  The downside is the tool is bulkier, so it can only be used on larger diameter holes.

Deep Hole Drilling is a process many shops outsource, particularly when there is a need for BTA Drilling or the kind of very deep holes where dedicated deep hole drilling machinery really shines.  However, if your deep hole needs can be handled with a gun drill on a lathe competitively, it’s not that hard to bring the process in-house.