If there is one thing I hope you’ve learned by now about g-code, it is that g-codes and CNC controllars are very modal. They remember certain states they’re in and continue to act on those states. For example, when you issue the G01 code for line motion, the controller takes all of the coordinates you give it as instructions to move in a straight line until you switch to another motion mode (perhaps arcs, using G02 or G03). When you’re writing g-code subprograms, it is therefore helpful if the subprogram can access or manipulate the modes.

Let’s consider what happens if you can’t manipulate the modes. For example, suppose you want to create a subprogram that makes a circular pocket at the current location whose radius is based on the “R” word. That’d be a pretty handy subprogram to have (although you could also quickly generate the g-code for such a pocket using our Conversational CNC Hole Wizard). Such a routine might be considerably easier to create if you could use relative motions by setting G91. But what happens when you go to return to the main program?

Without some ability to access the mode information, you just have to leave things in relative mode, or perhaps gratuitously assume the main program is using absolute motion and execute a G91 at the end if your subprogram. The truth is, you don’t really know what to do, unless you can determine what mode was in use–absolute or relative–when the subprogram was entered. If you can find that out, you can save that information in a #-variable and then restore the mode just before the subprogram returns. Now you have a subprogram that knows how to clean up after itself.

Not every controller supports the same modes, these are just the ones most widely supported. For example, the G90/G91 modes we were just talking about aren’t here. On most Fanuc controls, you can access G90/G91 using #4003.

Now, if you wanted to save, for example, the Feedrate that was in effect, you could write something like #100 = #4109. Now you’ve got the Feedrate stored in the #100 variables.

Now having gotten the Feedrate into #100, how do we restore it when the subprogram returns via M99?

That’s pretty clever, now here is how we set the control to use the motion mode stored in #100:

I remember that one really boggled my mind a bit when I first saw it. After all, #100 could contain almost anything. But, it works and it gives us exactly what we’re looking for in terms of setting up our modes.

G-Wizard Editor implements exactly the #4xxx variables described as being the most common above. Over time, we’ll add more variables, and they’ll be dependent on which canned post you use (since each controller offers a little different set of variables), but that list above is what you can really count on. As you step through your program with the simulator/debugger, you’ll see the mode information in the little window right under the backplot, and you’ll also see the information that gets stored or accessed from your #-variables. In this way, you can use GW Editor to help you debug your use of Modal Data in your g-code programs. 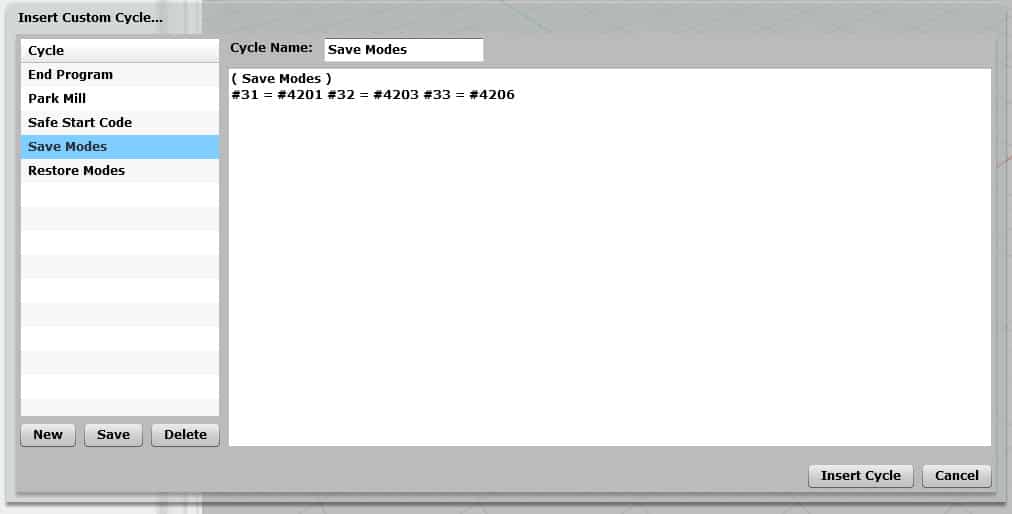 4. Set up your GWE “Save Modes” and “Restore Modes” snippets to reflect which modes you want to make sure are saved and restored for your macro programming.