What are Polar and Cartesian Coordinates?

Until this point, we’ve strictly been using Cartesian Coordinates where X, Y, and Z represent distances from part zero (absolute coordinates) or from the current position (relative coordinates). Most g-code programming is done using Cartesian coordinates, but for some problems a system called Polar Coordinates can make the problem much simpler to tackle. With polar coordinates, we use an angle and a distance relative to the origin. Depending on the control, we may have both absolute part zero and current position origins to choose from. This diagram shows us a comparison of the two coordinate systems:

When using Polar Coordinates, the angle is expressed in degrees counter-clockwise from the 3 o’clock position as shown in the diagram.

Switching between Cartesian and Polar Coordinates

Which Mode Does My Controller Use as the Default?

Interestingly, most controls will startup in relative/incremental mode (G91). This is done because it is thought to be safer if the mode is not what you expect. In other words, if you expected absolute it is thought to be safer to start in incremental than if you expected incremental and start in absolute. The truth is, not being in the mode you expect is not safe any way you look at it because the machine will do something unexpected. Therefore, make sure one of the first things you do in your program is to set it to either G90 or G91 so it does what you expect!

While we don’t use them very often, polar coordinates can really simplify some problems. Suppose you want to make a bolt circle, a very common operation. You could pull out your calculator and use trigonometry to figure the coordinates of each bolt on the circle. Or, you could use G-Wizard’s Bolt Circle Calculator to do the same thing for you. But if your control offers polar coordinates, you have a really easy way to program your bolt circle.

Consider the following example which creates a bolt circle of radius 8 having 6 holes spaced equally around the circle:

After establishing some safe starting conditions, the program uses a G00 move to the center point of the bolt circle. For simplicity, we’ve made that point be 0, 0.

On block N5, we turn on the polar coordinates and on the next line we start our G81 canned cycle. Note the coordinates given: X8 and Y0. We’re in polar coordinate mode, so X is the distance from the origin (8 inches) and Y is the angle (0 degrees). That origin is at X0Y0 and was established because as part of the safe conditions, we have set absolute coordinates using G90, so our origin will be at 0, 0.

Here is our g-code program as simualted by G-Wizard Editor: 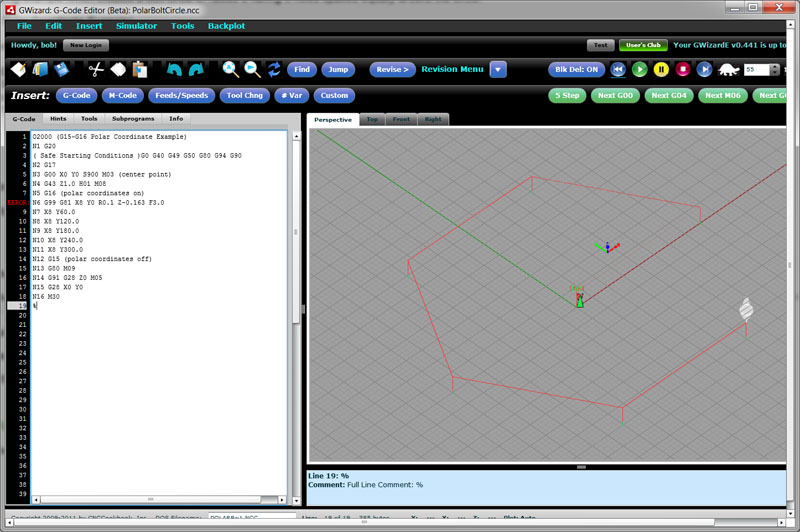 It’s hard to imagine a simpler way to visualize or program a bolt circle and you didn’t have to do a lick of trigonometry!

This is the sort of thing polar coordinates are good for. 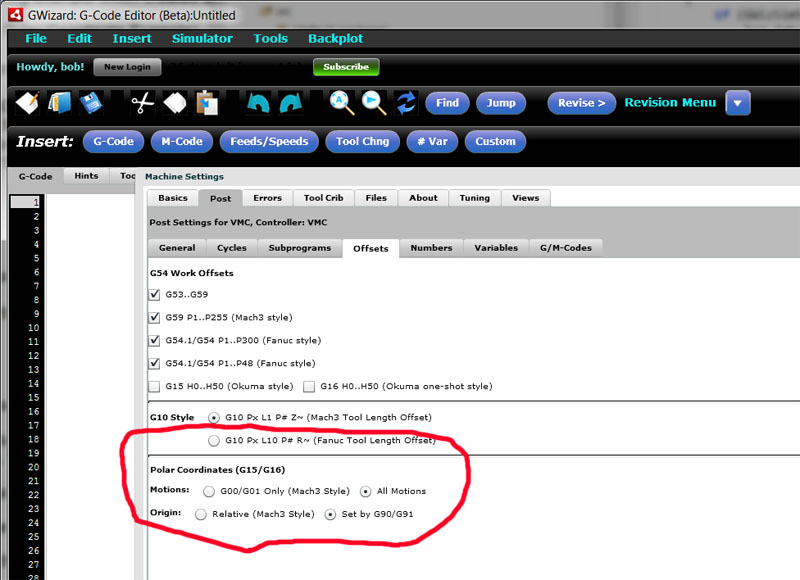 Polar to Rectangular Coordinates Calculator (And Back)

Need a quick calculator to go from Polar to Rectangular Coordinates and back?  We’ve got you covered: 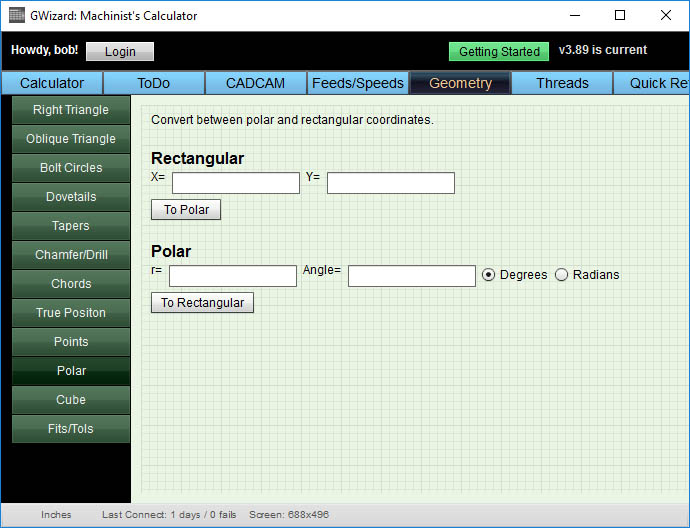 1. Write a g-code program that uses polar coordinates in some way.

2. Dig out the programming book for your controller and read the chapter on polar coordinates so you can see how they work.

3. Configure G-Wizard Editor properly for your controller’s use of polar coordinates.