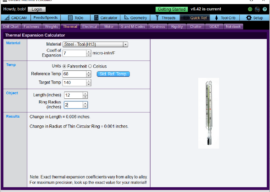 What is Thermal Expansion?

Whenever an object is heated or cooled, its length changes by an amount proportional to the original length and the change in temperature.

Thermal Expansion is important to machinists because they’re trying to manufacture parts within tolerances.  In many cases, thermal expansion can change the dimension of parts sufficiently that it should be compensated for. 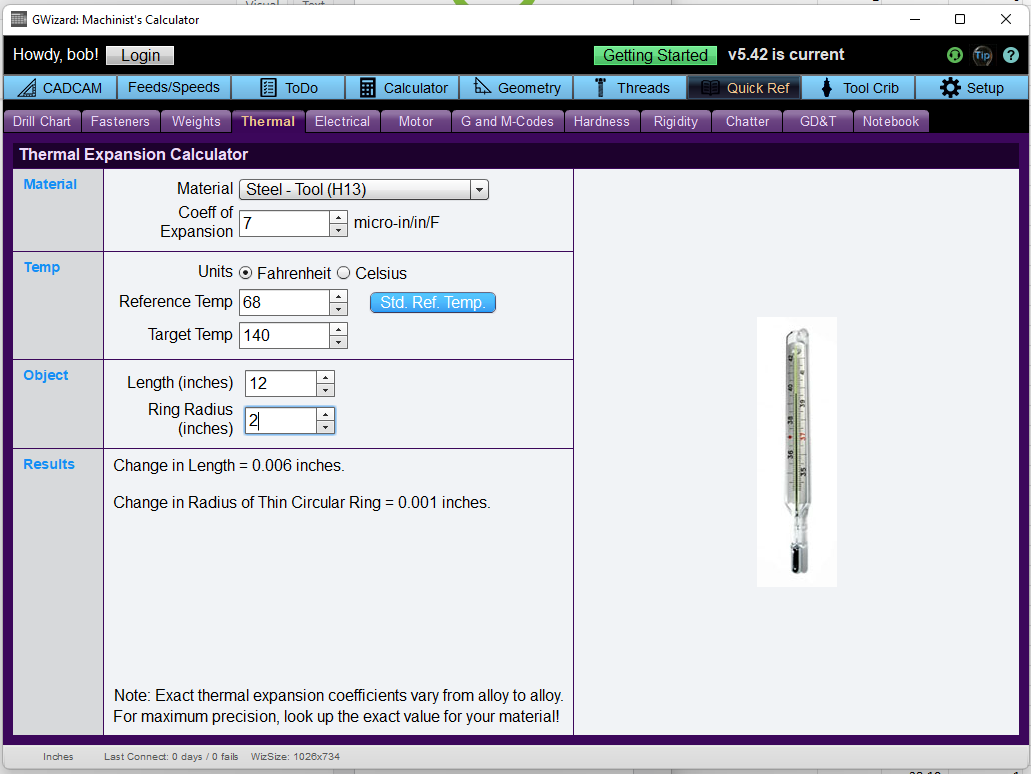 It’s pretty simple to use:

Select a material, and it will enter the Coefficient of Thermal Expansion for that material. Keep in mind the note at the bottom–it uses the average of thermal expansion coefficients across many alloys. For more precision, look up the exact coefficient for your material and enter it. I’d wait to see what the average reveals and if its within a factor of 2x or so of worrying you, look up your exact material’s coefficient.

Lastly, enter the object’s length and/or a radius.

As soon as you enter each variable, G-Wizard will tell you how much the temperature differential between the Reference and Target will move the material in length or radius.

Let’s consider a simple problem you might use the calculator for. Too much bearing preload drives up temperatures, and in the worst case, it leads to thermal runaway which will destroy the bearings in a hurry. They get hot, they expand, that increases the preload, which raises the friction, which makes them hotter, so they expand more, yada, yada.

We can use G-Wizard to see how much expansion we’re talking about. The screen shot shows the scenario. Imagine we want to run our spindle bearings up to the point where they’re at 140 degrees. I’ve come across a number of references calling for this as a good goal or maximum for bearing temperature. Less and you don’t have as much preload as you could. More, and you may have the thermal runaway situation or break down your bearing grease.

We can see that for a spindle 12″ long (object length) and 2″ in diameter, if we assume we’re starting from the reference temp (initial temperature) and running up to a final temperature of 140 degrees, we will see that spindle grow 0.006″ longer and 0.001″ larger in diameter. That’s pretty significant when bearing tolerances are measured in tenths!

Or, consider a CNC machine’s leadscrew. Let’s say it is 30″ long. It is precisely calibrated at the reference temperature, but we’re running the machine on a hot day and we’re spinning the heck out of that lead screw. So it creeps up to 98 degrees final temperature or so. How much longer did it get?

Turns out it grew about 0.0063″. Heck, even if you’re only machining a part that requires you to use 6″ of travel, that’s a difference of 0.0013″ in length that goes against the accuracy of your handwheels or of your calibrated CNC servos or steppers. That’s a lot of error!

Hence manual machines benefit from DRO’s that tell how far the axis really moved and CNC machines benefit from scales that are essentially DRO’s telling the controller the same thing. In some cases the CNC may rely on a temperature sensor to estimate, but the scale is a better solution because it tells how far the axis really moved and allows you to ignore thermal expansion (for the most part).

How to Reduce Thermal Expansion

When doing high tolerance machining and manufacturing work, it is important to reduce thermal expansion as much as possible.

There are 4 basic ways to reduce thermal expansion or its impact:

Note that your own body heat is a thermal source that can cause thermal expansion.  In terms of reducing contact with heat sources, try to avoid:

Heat will flow from a warmer object to the colder objects until they reach thermal equilibrium.  The larger the temperature difference, the faster the heat will flow between the two.

The best Metrology Labs use a controlled temperature room.

Lastly, place the objects you will be working with together in the temperature controlled environment that they can reach thermal equilibrium.