Rough Cutting: The Limiting Factor in Your Shop? 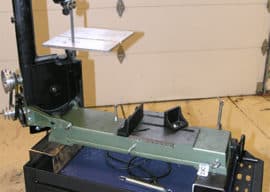 It isn’t that I had the world’s greatest mill and lathe from the get-go, because I didn’t.  They were a pretty average RF-45 mill and Lathemaster 9×30 lathe.  They were typical crotchety Chinese hobby machines, and I don’t miss them too much, but I got a lot of projects done with them and without too much complaining.  It took me a long time to realize it, but where I was fussing and cussing the most back then was in cutting rough stock to size before I could even get it to those machines.

I was a packrat for raw metal back in the day.  Plates, structural steel, and long rounds were piled all over my garage shop.  Almost all of it was too large for my machines, so before I could do much of anything, it had to be cut down to size.  I started out life with the ubiquitous little Harbor Fright Band Saw: 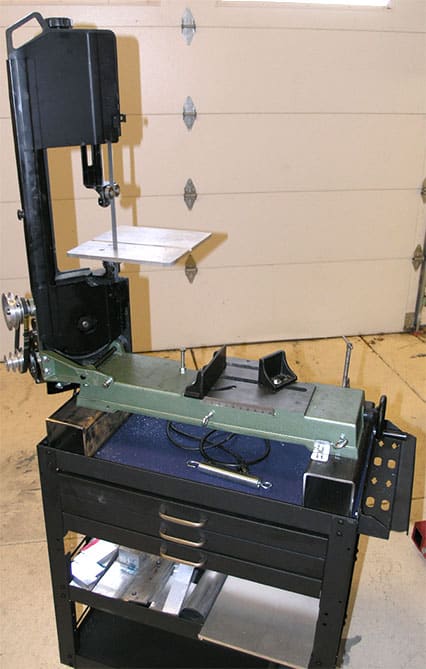 I paid all of $41 on eBay for the thing (it had some cosmetic issues), bought a decent Starrett bimetal blade for it that cost more than the saw, and proceeded to hate on the little stinker through many projects.  What you see is what it looked liked towards the end of its useful life.  I’d mounted it on a cart (for more storage and portability), added a nice table for upright work (normally it saws in horizontal mode), added a little oil dropper to lubricate the cut, and generally learned how to tune it up to work with the minimum of hassles.  After all that, and especially after I learned to tune it up, it was decent, but very slow and still somewhat finicky.  What do you want for $41?!??

Somehow, I came across what would’ve been a far better initial purchase–a DeWalt Multicutter.  Here’s a shot of it in action: 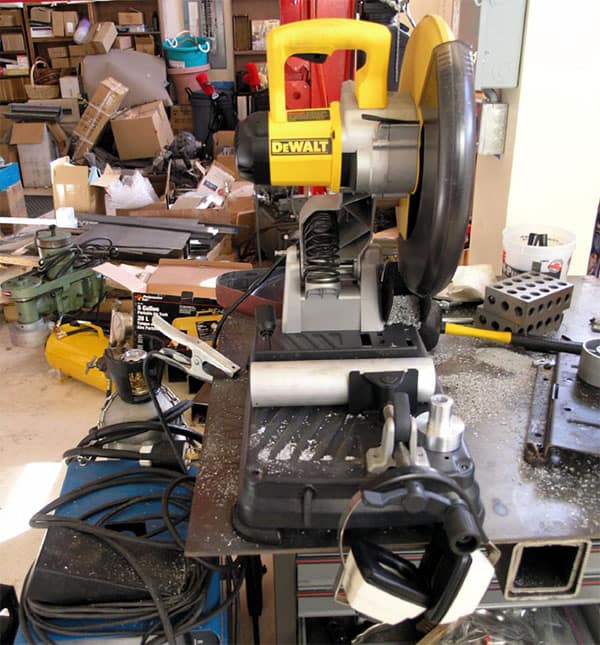 My DeWalt Multicutter in the middle of a messy shop…

Wow, what an improvement!  This is a poor man’s cold saw, and just the thing for DIY CNC’ers.  It’s basically a carbide toothed saw blade in a miter box format with a motor that spins it slow enough (still much faster than a cold saw) so the blade can live.  I’ve sliced through everything from cast iron to make a table for a disc sander to endless aluminum stock to steel tubing.  It’s so much faster and easier that despite having a full-sized industrial band saw now, I still go to the Multicutter for any kind of smallish diameter long stock and save the bandsaw for plate work and curves.

I’ve used a lot of abrasive cut-off saws, and I like this thing so much better.  The price is actually pretty reasonable–you can buy one on Amazon right now for $435, direct from DeWalt with free shipping.  It just beats the heck out of fighting with a cheap bandsaw.

Here’s what they look like without all the clutter: 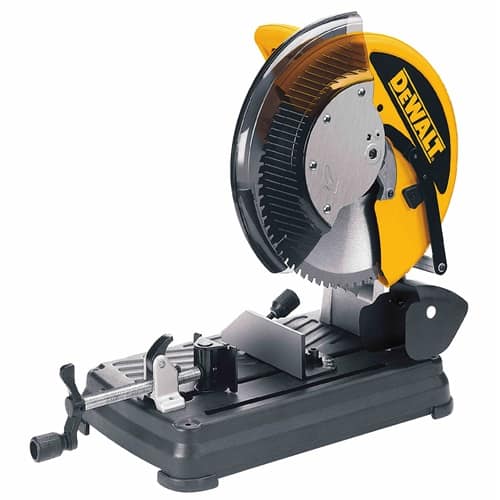 A pro-shop is going to have much better solutions, but even pros might find one or two of these to be handy in a corner for quick and easy work while the bigger machines are busy.

The blades actually last a lot longer than I expected.  Mine could use a new one, but still cuts.  I plan to drop it by the local saw blade sharpener and see if that’s a cost effective way to renew it.  If not, new blades are not that much either.

Okay, But What’s Even Better?

For a DIY situation, I’m not sure there’s much better.  Of course you can order your stock cut to size, but that prevents you keeping much on hand. You could buy a bigger nicer bandsaw–I took that route when I found a gorgeous Delta Industrial Bandsaw that had been fully restored: 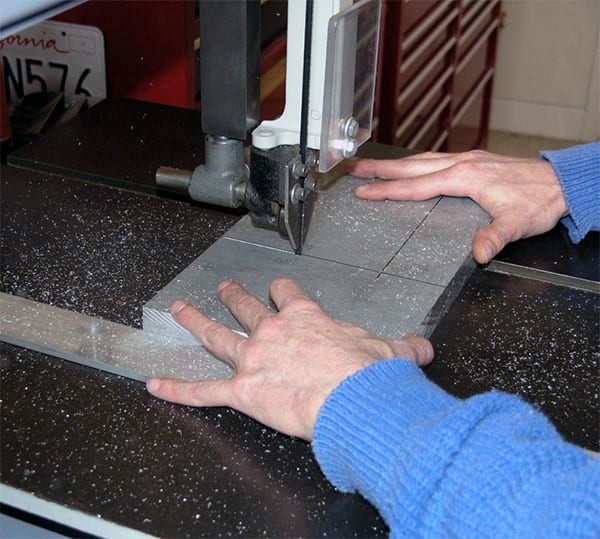 Sawing aluminum plate on the Delta…

I love the Old Beast, and it is just the thing for sawing plate like I show in the photo above.  I stuck a VFD on it to deal with it’s desire for 3 phase (not available at home for me) and use it a lot.  But for stuff that fits on the DeWalt, I keep going back to it.  It’s faster and more convenient than the Delta.  In fact, if I had a CNC Router table, I wouldn’t have much use for the Delta, except perhaps for cutting harder materials like steel or cast iron.

For really big plates, I fire up my ESAB plasma cutter from time to time.  I can’t wait for someone to come out with a reasonably priced small-scale Waterjet machine–that would be the ultimate.

Meanwhile, look into that DeWalt and keep eyes peeled longer-term for a really nice bandsaw.  You won’t be sorry!