Results of our 2015 CAD Survey 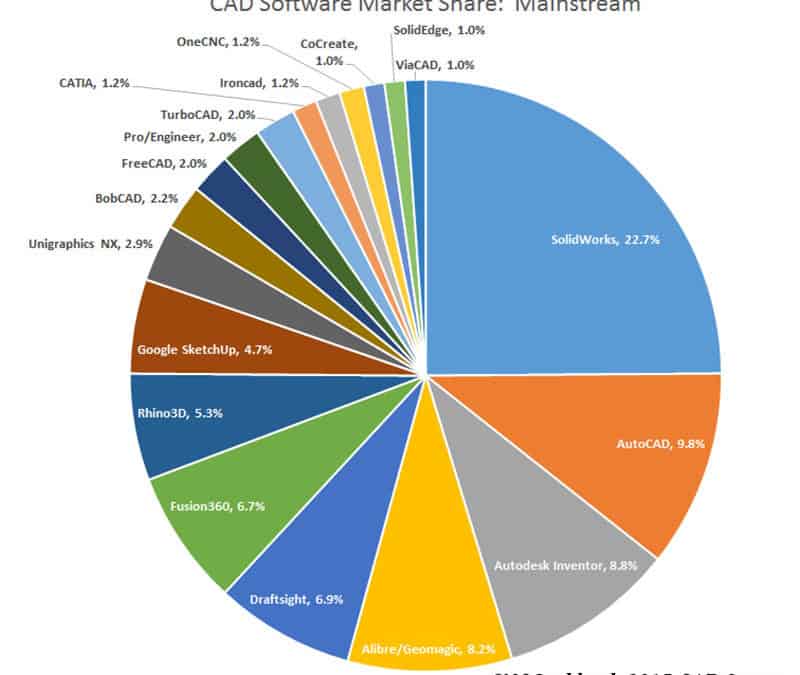 The results are in for this year’s CAD survey.  We got over 300 responses as I write this.  They’re still coming in briskly so, we’ll probably get many more, but I wanted to go ahead and do the analysis and get the numbers up.

–  Mainstream/Overall:  This is every package that got a 1% or better share.  There will still quite a few below 1% that got 1 or 2 votes, but they’re not statistically valid against the bigger numbers.

–  Pro:  These are the more expensive packages like Solidworks.

–  Mid:  These packages are charged for but are typically not as expensive as the Pro packages.

–  Free:  There’s always a market for Free, and these tools get better every year.

–  CAM:  Another way to save money is to use the CAD that comes with many CAM packages.

Let’s drill down into each category and see how things look.  We’ll also do a little retrospective on what’s changed since we surveyed in 2013. 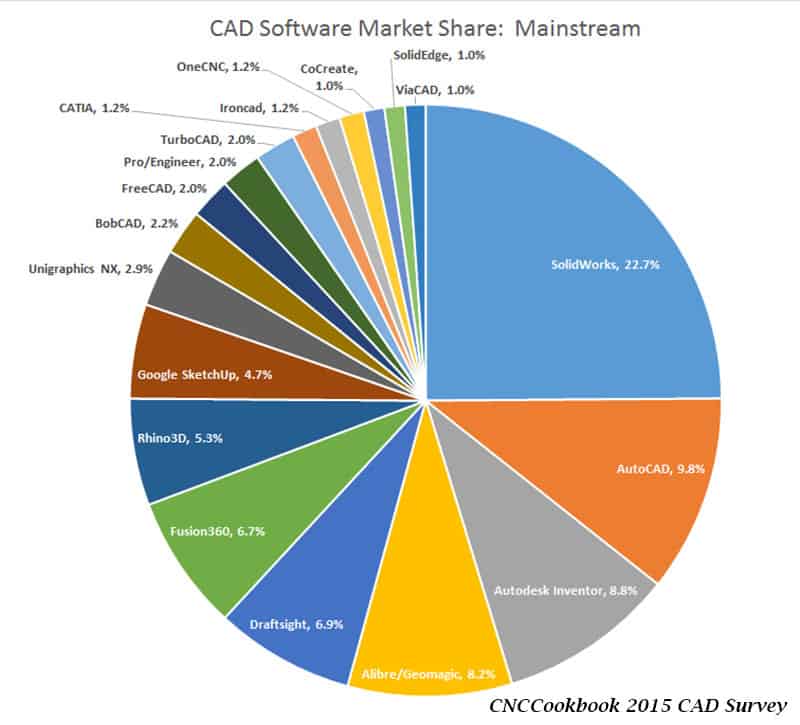 This chart gives our best estimate of overall market share without trying to segment the market.  Comparing it to 2013 we can see:

–  Solidworks is holding on to its #1 spot, though it did drop from 25% to about 23%.  You really can’t fault this product and it is a CAD staple for CNCCookbook too like so many other companies.

–  AutoCAD has unseated Alibre, although its overall share fell from 12% to 9.8%.

–  Inventor also moved up relative to Alibre (now called Geomagic), and stayed in the 9% range.

–  Fusion360 is also a big new player, weighing in at 6.7%.  We’re Fusion360 users here at CNCCookbook, though we hoping to see a lot of usability improvements from them soon.  All in all, it looks like Autodesk is really firing on all cylinders in this market.  Taken together, the 3 products add up to 25.3%.  I think we may have found the missing Alibre market share.

–  Rhino3D also lost some ground, moving from 9% down to 5.3%.  I hate to see that as Rhino is one of my favorite CAD programs.

–  Google Sketchup lost a little overall share.  I believe the cheap and free CAD software is better suited to CAD than Sketchup and that’s what’s doing it.

There’s more change as we get to the less popular packages, but I think such changes are better analyzed once we segment the markets.

These are the most expensive packages and (theoretically) therefore the most capable: 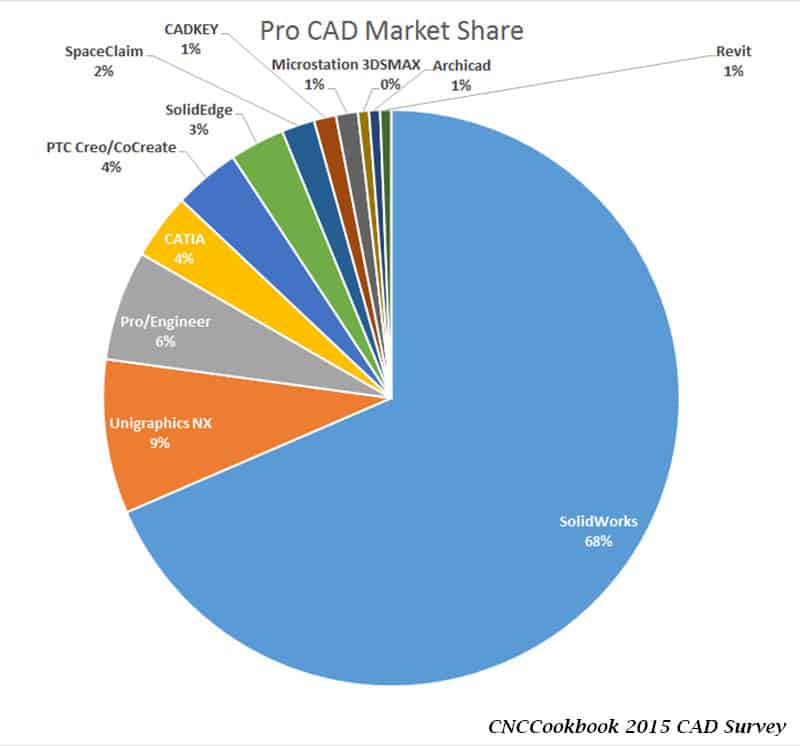 As everyone probably expects, Solidworks dominates the Pro category and in fact their share of this category has moved up from 62% to 68%.  It’s good to see healthy growth.

For the other packages we see:

–  Unigraphics NX has passed Pro/E for the #2 spot.  It looks like almost a direct trade off in share.

–  SolidEdge and SpaceClaim look like they’ve slid a bit.

We’re also seeing more architectural CAD packages in the survey, which I suspect means we have more from the CNC Router / Woodworking community among the readership. Pro represents 33% of the survey responses.

The Mid market straddles cost-conscious Pros and Hobbyists alike, so it is always interesting: 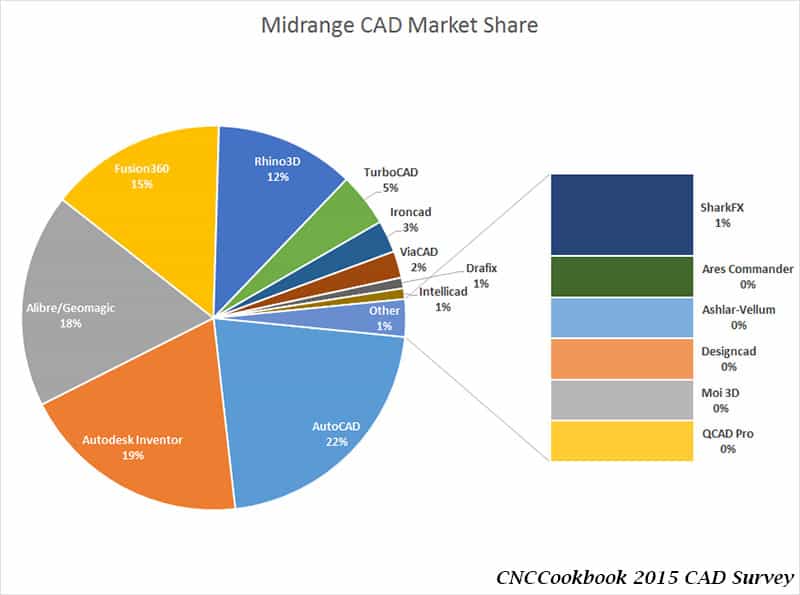 Lots of players in the Mid-Market for CAD…

There are lots of players in the Mid-Market for CAD.  Comparing to 2013, the first thing we see is a big drop off for Alibre, which had been the #1 Mid-Market choice.  It’s gone from 30% share down to 18%, a big change.  Autodesk is really dominating this market as the own #1, #2, and #4 slots. Had they been the ones to buy Alibre there wouldn’t be much Mid-Market left except for Autodesk.  Of course Fusion360 wasn’t in the 2013 survey, so it has really gained share quickly.

–  IronCAD is another that didn’t appear on the 2013 results and it has taken up a 3% share here.

Mid represents 45% of the survey responses.

Nothing wrong with Free if it does what you need it to do.  This is largely a hobbyist segment, but still very interesting nonetheless: 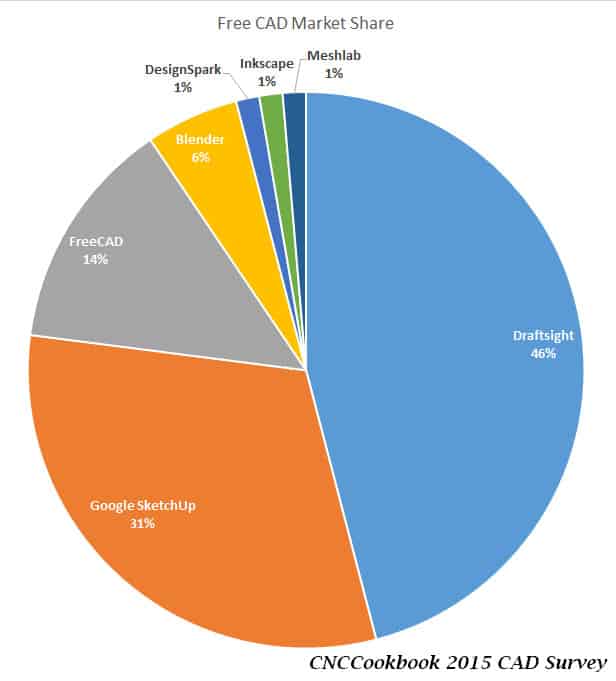 Draftsight has totally unseated Google Sketchup in the Free category…

The big news here is that Draftsight has totally unseated Google Sketchup in the Free category.  Obviously I need to take a look at it.

–  Blender is down to half what it was from 12% to 6%.  Blender is mostly useful to the 3D printing crowd it seems to me, but I wonder what took the share from it.

–  Meshlab and DesignSpark are new for this survey while VisualWorks has disappeared.

Who says you have to buy a separate CAD package at all?  Many CAM packages include integrated CAD functionality.  In some cases, it’s powerful enough that a separate CAD program may not even be necessary.  This category covers that case.  BobCad users clearly find it adequate to use the program’s built in CAD as there are quite a few of them doing it that way.  EdgeCam, MasterCAM, OneCNC, and GibbsCam are all relatively expensive CAM programs that have significant CAM functionality available right in the same software.

While CAM-based CAD is often less powerful than software built especially for CAD, it does have one important advantage which is that the two are using exactly the same underlying geometric model.

Here’s the breakdown of CAM packages being used for CAD: 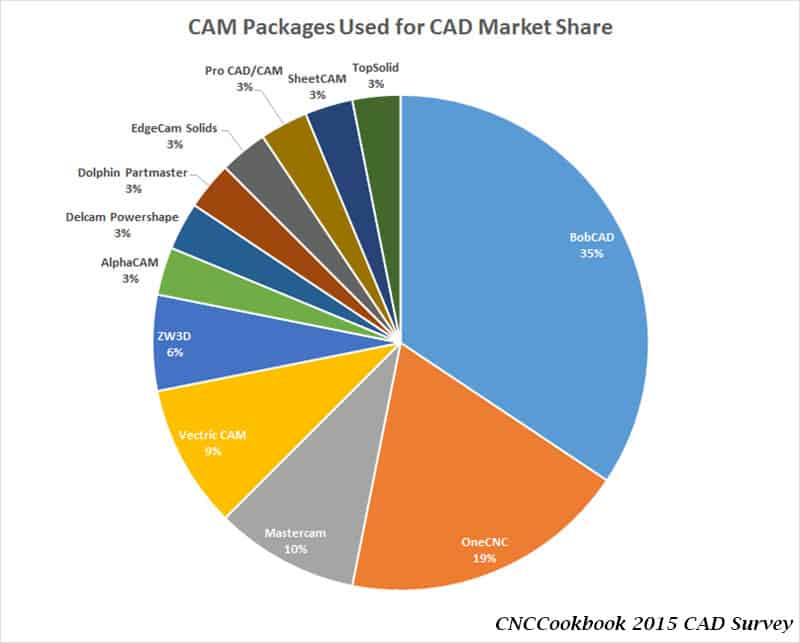 CAM packages being used for CAD…

–  Mastercam is still in the #3 position.

CAM is only about 7% of survey responses–the vast majority of folks prefer to have a dedicated CAD package rather than to use their CAM for CAD work.

For more CNCCookbook surveys, check out our Survey Page.

Wondering How to Choose a CAD Package?

It’s not just a popularity contest–you want to choose the best package for your needs, which may be different than others.  If you need to choose a CAD package, check out CNCCookbook’s 3 Step Process for Choosing CAD Software.  You’ll be glad you did.