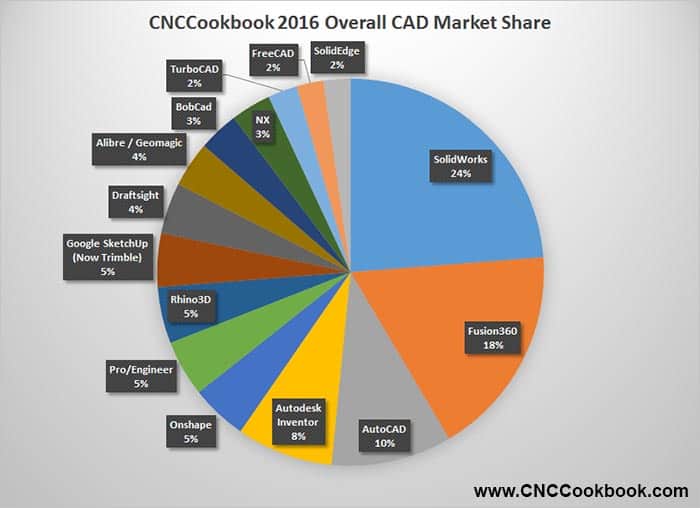 We’ve just hit a critical mass of hundreds of responses to our 2016 CAD Survey, so it’s time to find out how everyone voted.  We’ve done CAD Surveys in 2013 and 2015, so we’ll be able to see a little market trending here too.

As with our CAM Software Survey, we’ll be doing one every year from now on–the market is just changing too quickly to look only every other year.  Also like the CAM Survey, we added more questions this year so we can give you an even more in-depth look at the CAD Software world for CNC’ers.

We divide the market into 3 segments:

In all, 58 packages were represented as being used in production in 540 cases.  Here’s what the overall share looks like without any attempt at segmentation: 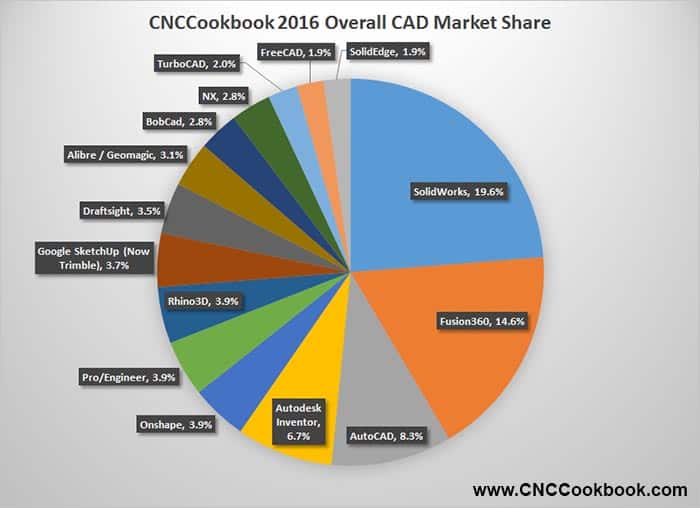 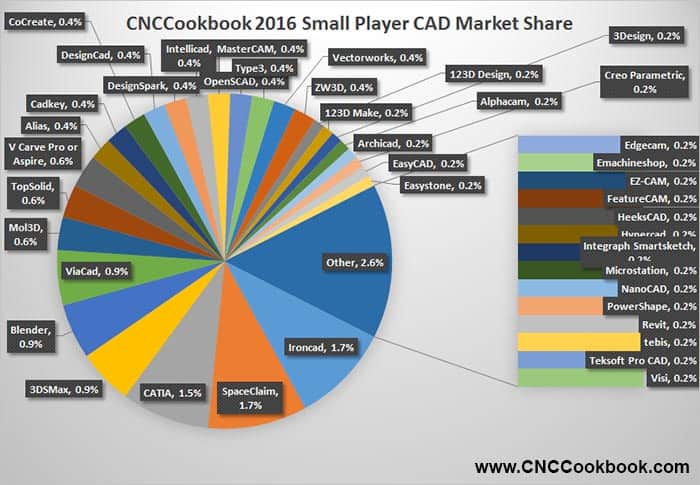 Breakdown of the smaller players (remaining 17.4% of market)…

As usual, the market is highly fragmented among lots of players, those the Top 15 control over 80% and the Top 5 control over 50%.  Let’s see what’s happened since we surveyed at the beginning of 2015:

Things are pretty chaotic when viewed this way.

If Market Share represents packages in production, packages tried is closer to being “Mind Share.”  If you’ve tried a package, you’re aware of it and it has some mind share.

In aggregate, 78 packages were tried some 1586 times.  The 15 most commonly trialed CAD packages account for 80% of the trials: 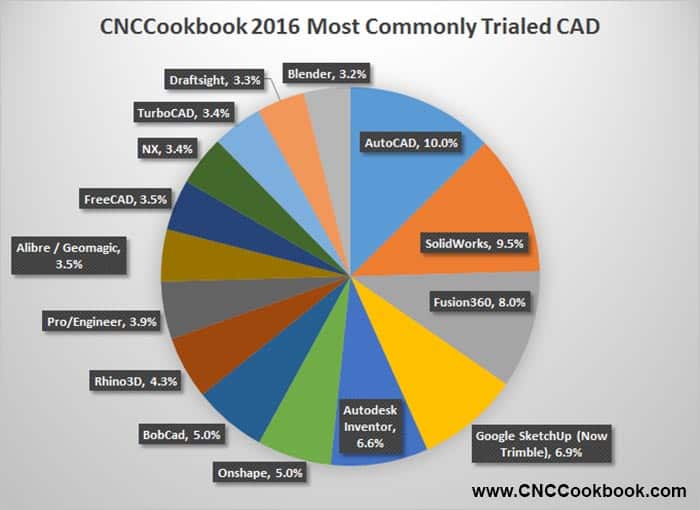 Of those 15, here’s what the conversion rate from Trial to Adoption looks like: 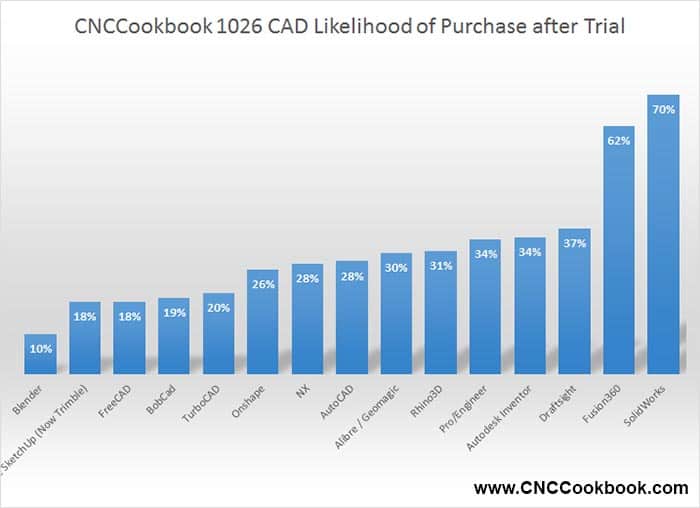 Conversion rate from Trial to Adoption…

Number one with a 70% conversion from Trial to Purchase was SolidWorks followed by Fusion 360 at 62%.  These two were far above the rest of the pack which starts with Draftsight at 37% and dwindles to Blender at 10%.  It seems clear that there must be some factors present in packages with low adoption that soured prospective customers during the trial and reduced their likelihood of moving forward.  Perhaps the product was hard to learn, lacked features that were important to the user, or just seemed too expensive.  We hope to discover why adoption is poorer on some of the other packages in our installment that discusses the Strengths and Weaknesses of the individual packages as identified by their users.

Customers tried an average of 2.9 CAD packages before selecting one for purchase, so they didn’t just grab the first thing that came along.  I don’t blame them.  Learning a new CAD package is not easy–you want to make sure the one you settle on is right for you.  Plan to invest enough time to thoroughly evaluate at least 3 packages if you want to do as good a job as our audience did on average.

OK, it’s time to drill down by market segment and see what’s going on in each.  Let’s start with a look at how large each segment is among the CNCCookbook audience of survey responders: 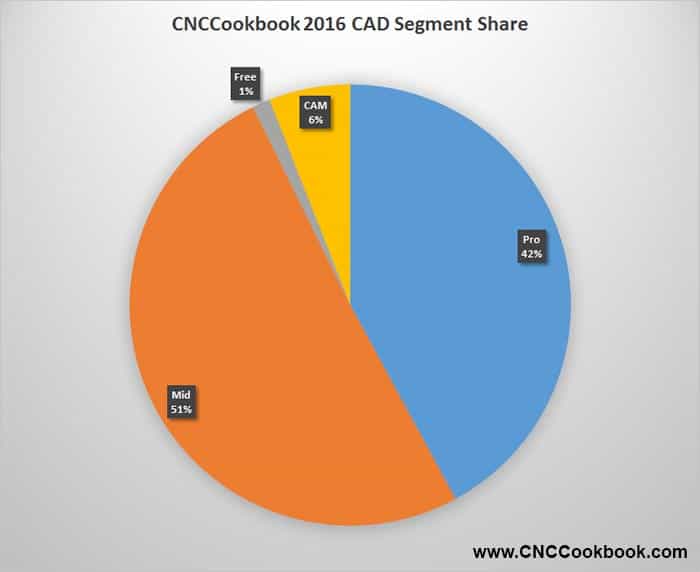 Mid is the largest, followed by Pro, followed by CAM, and then Free is very small.  Note that these labels are an over-simplification.  “Pro” is really more closely “High End” or more expensive software.  And Fusion360 or Onshape, both in the “Mid” segment, can be had for “Free”.  The “CAM” segment has been confusing in the past.  It simply reflects those who choose to use the CAD that is built in to their CAM software rather than a purpose-built CAD package.

These are the most expensive packages, and the relative share breaks down as follows: 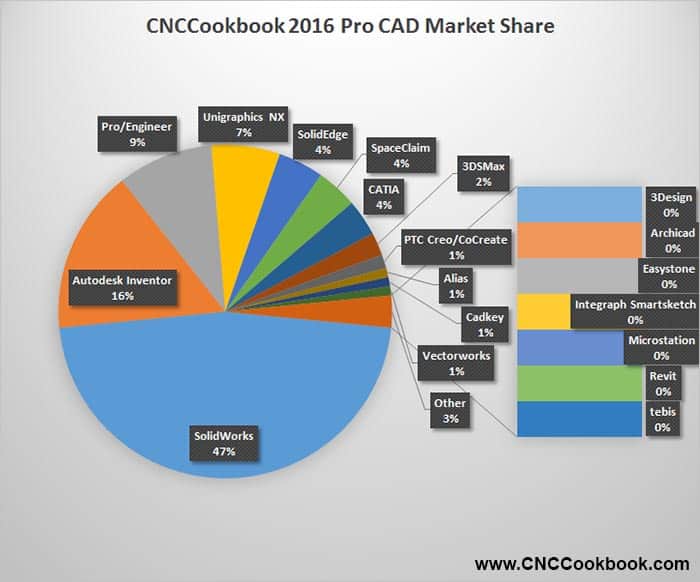 The Pro Segment is somewhat more crowded than it had been, and it looks like SolidWorks has lost some share.  We saw some slight loss of share for them overall up above, so lion’s share of the reduction is due to moving Autodesk Inventor from the Mid to the Pro category.  This was done because I had many many requests to do so, and I agree, it makes more sense.  It’s also due to Pro/E picking up share.

Unigraphics NX has lost a bit of share and the smaller players continue to jockey for position–not much more to report there.

Here’s what the Mid Segment Market Shares look like: 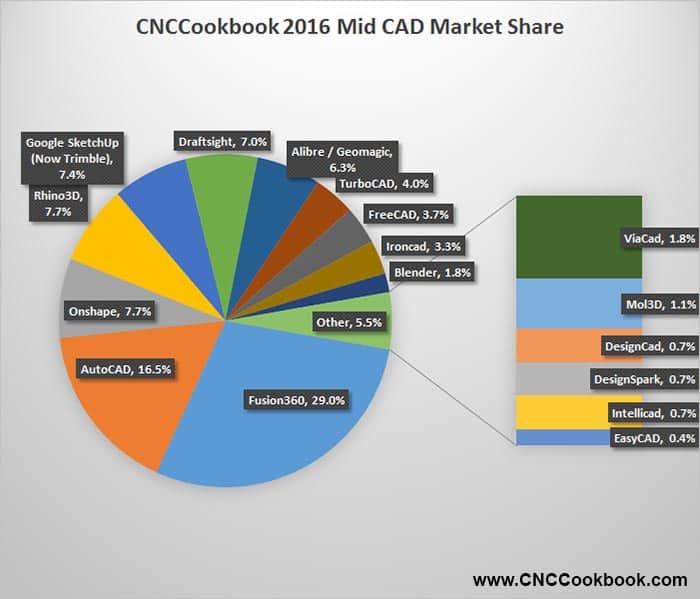 There’ve been changes since last year that make it a little hard to compare.  We moved Autodesk Inventor to the Pro Segment and Sketchup moved from the Free to here.  Perhaps the biggest news is how much share the Cloud CAD packages (Onshape and Fusion 360) have taken in an extremely short time span.  Fusion 360 is now the number one choice having edged out its sibling, AutoCAD, from that position and making it #2.  Last Year Fusion 360 had about half as much share and was the #4 choice.  Onshape didn’t show up at all and has achieved the #3 position.  This was very much at the expense of Rhino3D, but an even bigger loser was Alibre/Geomagic.  It’s main claim to fame was that it was the “cheap parametric” (e.g. the cheap Solidworks alternative) CAD, but both Fusion 360 and Onshape offer parametric capability and more.  Not much else to report at the lower market share end of this segment, although TurboCAD actually managed to grab a little share.

This year, the Free Segment was a much smaller part.  Only 1% of respondents reported using the Free packages, and the packages were 123D Design, 123D Make, Emachineshop, HeeksCAD, NanoCAD, and OpenSCAD.  Usage was even across all those packages.

This is no doubt due to the fact that Onshape and Fusion 360 can be had in free versions.

The CAM Segment consists of folks who choose to use the CAD built into their CAM rather than using a purpose-built CAD package.  To be clear, it is not CAM market share–we covered that recently in our CAM survey series.

At 6% of respondents, it was the second smallest Segment after Free.  Here’s what Market Shares looked like for the CAM Segment: 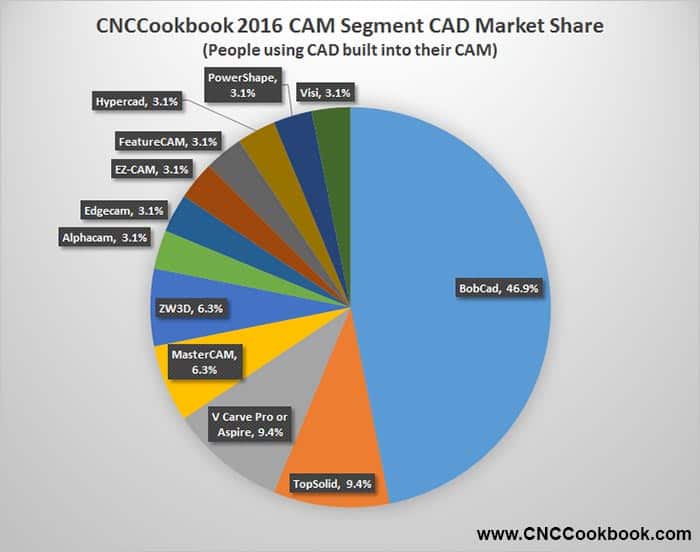 CAM Segment:  People using the CAD in their CAM software instead of a dedicated CAD program…

BobCAD remains in the lead for this segment, but there are a number of other changes.  OneCNC, which had been #2 is no longer showing up.  Mastercam has fallen from #3 to #4 while VCarve has moved up to #3 from nowhere in 2015.  Most folks used dedicated CAD, and this chart doesn’t reflect CAM market share, so it’s hard to draw much conclusion from it other than that perhaps BobCad users are finding the CAD to be good enough to make a go without a separate package.

The CAD market shares have really changed over the course of the last year.  In particular, the Cloud CAD packages have made a huge impact in the Mid-Market, and probably in the Pro market too judging from some loss of share here and there.  This mirrors the effect the Cloud has had in many other markets.  The introduction of Cloud alternatives always creates a great hue and cry where many try to explain why it’ll never work for their particular market.  Meanwhile, the Cloud Vendors start soaking up customers steadily.  It’s going to be interesting to watch this drama unfold in the CAD market too.

There’s a lot more data to be crunched, so we’ll be doing a multi-part series to roll it all out.  This first installment has been focused on market share and mind share.  Make sure you don’t miss out on future installments by subscribing to our email newsletter below.  We’ll make sure you get a weekly summary of our blog posts together with some valuable premium content that’s only available to our subscribers.  Part 2 in the series covers customer satisfaction ratings for the CAD packages.