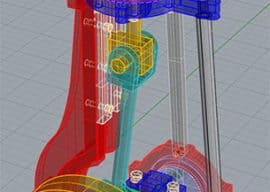 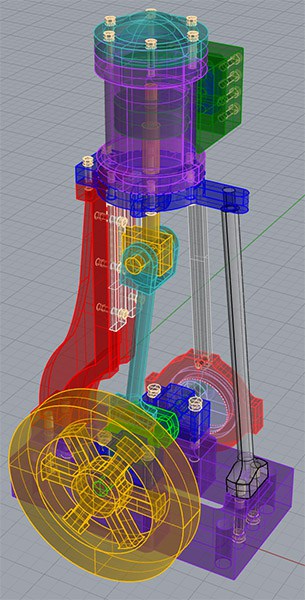 Article Update:  Adding the results from our second installment.  Additional data begins below the first installment with share of free, educational, and pirated users.  Congratulations to our Gold and Silver Customer Satisfaction Award winners!  Also, analysis of IP addresses revealed that one our contestants was stuffing the ballot box.  That sort of thing will not be tolerated, and I have removed all references to that product.

It’s time to present the results of the CNCCookbook 2020 CAD Survey!

I will present the results in several installments in the form of updates to this article.  If you’re part of our email newsletter (signup is below this blog post), you won’t miss one as I will announce each update.

Without further ado, here is the first installment!

There were not quite 300 responses to our question about production CAD packages.  Thank you all very much for participating!

In all, 39 packages were represented as being used in production by our respondents. Here’s what the overall share looks like without any attempt at segmentation.  Let’s start with the Top packages, which comprise 90% of the market (up from 82% last year): 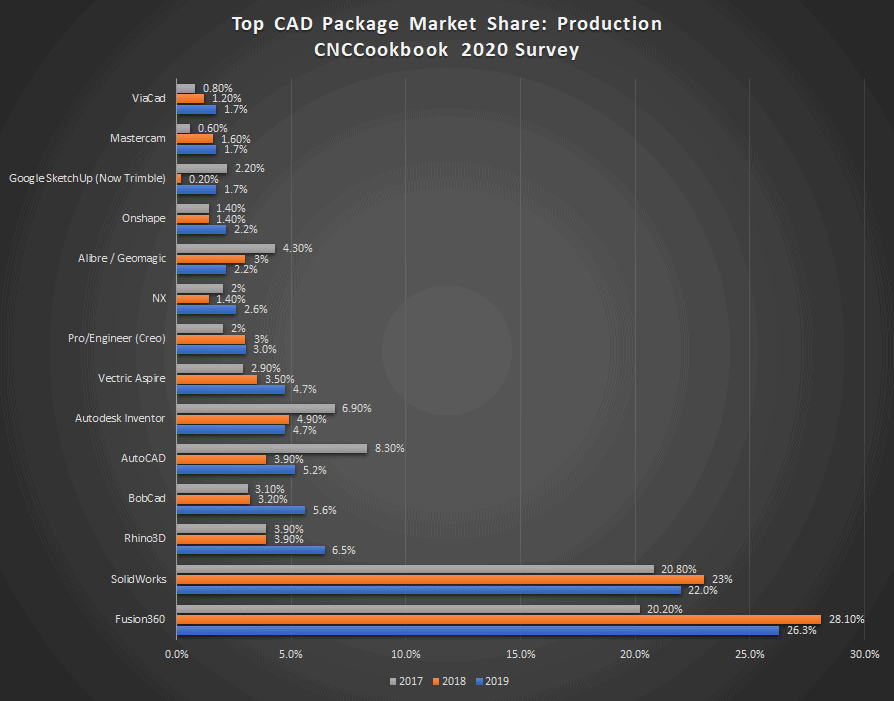 The overall market has consolidated a bit for this group, but the two market leaders, Fusion 360 and SolidWorks both lost some share.

Rhino3D and BobCad are also gaining share in 2019, as is Vectric’s Aspire and venerable AutoCAD.

I keep an eye on OnShape, and while it gained a little share, it’s clear why they wound up selling the company to PTC.  The company just wasn’t growing nearly fast enough to take a run at going public any time soon.

If Market Share represents packages in production, packages tried is closer to being “Mind Share.”  If you’ve tried a package, you’re aware of it so it has some mind share.  We can also learn from the ratio of production market share to “tried it” market share.  A package that has been tried by many and adopted by few is obviously different than a package where the majority who try it adopt it.

The average respondent tries about 3.7 packages before settling on one, down slightly from 4 packages tried last year.

The most commonly trialed CAD packages account for 82% of the trials: 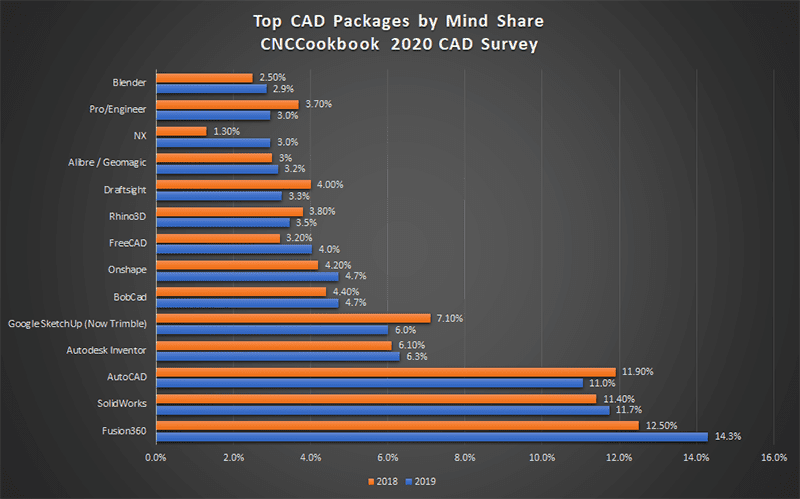 Autodesk and Solidworks dominate the mind share, though the Google/Trimble SketchUp product is in their midst.

What about that adoption ratio?  How many who tried wound up buying?

Here are the adoption results for the 15 Top Production Market Share CAD Packages: 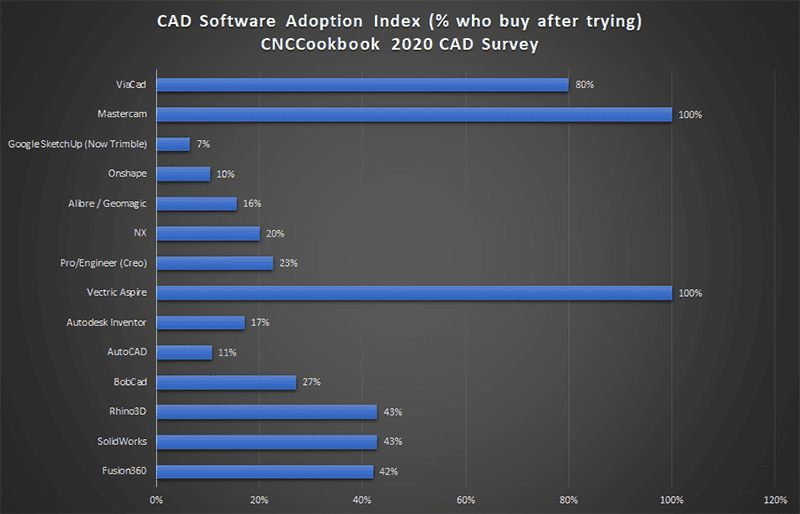 Treat the numbers as relative, not absolute.  Draftsight does not have a literal 29% adoption rate if you try it, but MasterCAM’s adoption rate really is that much stronger than Draftsight’s.

These numbers are indicative of satisfaction achieved during a trial when evaluating the software.  If the vendor is successfully getting their word out, then all other things being considered, the Adoption Rate should tell us who will grow by next year’s survey.  Let’s see how that goes.

MasterCAM looks good on this scale, but truthfully the sample size for them is pretty small.  Solidworks has slightly edged out Fusion 360 vs last year where it was the reverse.  I’m not sure the numbers can be read that closely though–both have nice momentum on the journey from trial to purchase.

Adoption rates look good for all the top contenders on market share (and the list is sorted with higher market share at bottom of the graph).  You can see that’s one reason they have such high market share–people try them and wind up buying.

Are You Evaluating New CAD At This Time?

Only a little over 10% of respondents are interesting in changing their CAD packages.  It takes quite a while to learn one, and once you have mastered a package, it’s really tough to switch.  This all provides friction that slows down market share changes.

CNCCookbook serves a mixed audience of Professional and Hobby CNC’ers.  For this survey, 64% of the participants were Professionals.  That’s up quite a bit from 56% last year. 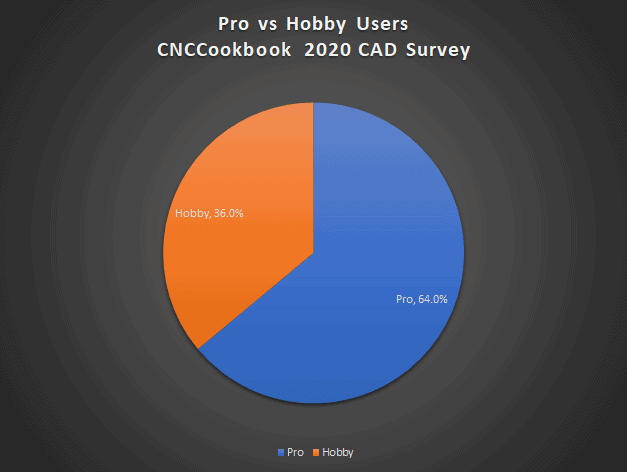 Much like our CAM Survey, we can see that Fusion 360 is here to stay, but the major players aren’t going anywhere either.  Like last year, a question was asked to determine the relative Free (plus educational and pirated) share vs paid share of the packages. 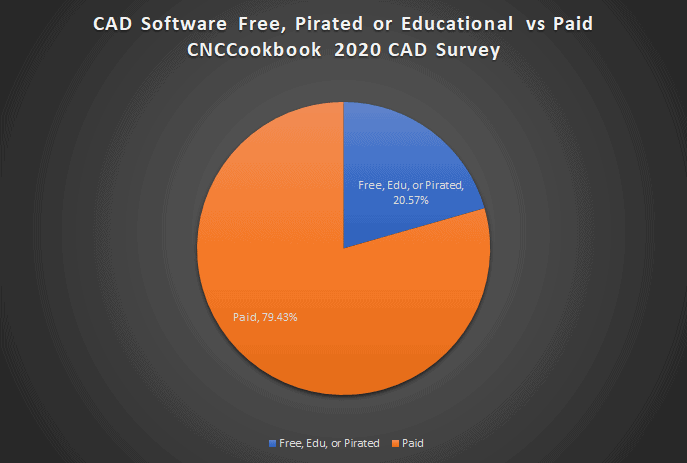 We get about 21% Free/Pirated/Educational vs 29% last year, so this segment is seems to be shrinking.

Here is the breakdown on what percentage of the respondents are using Free/Educational/Pirated versions for each of the top packages: 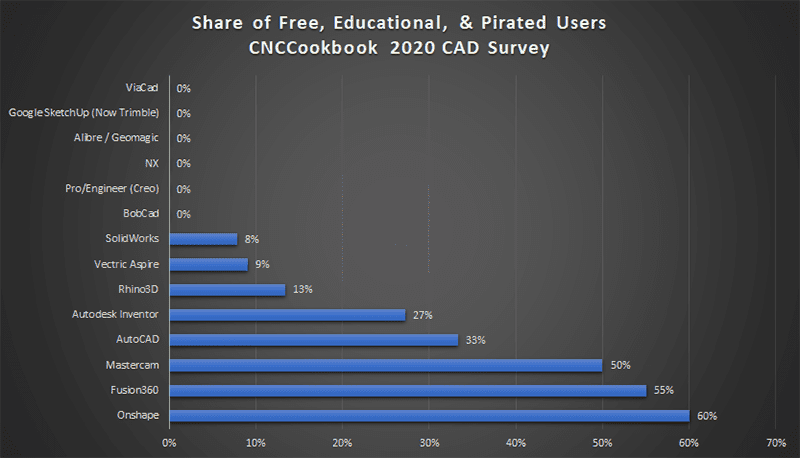 There’s no denying that free is a powerful tool to drive adoption, so I find it all the more impressive when a tool that has very low percentages of free users does so well in the market share comparison.

In fact, if we take out the free users, the market share situation changes pretty radically: 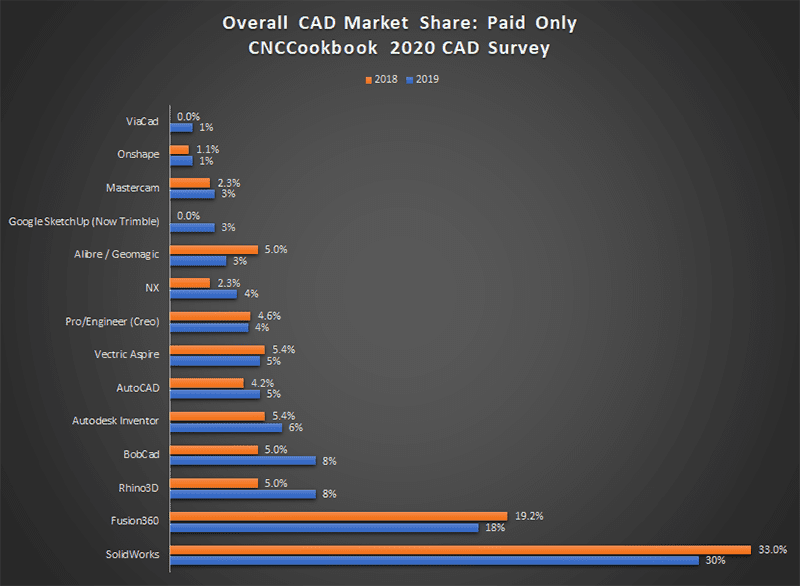 That changes the picture quite a bit, doesn’t it?

Solidworks and Fusion360 each lost a little share versus last year and Rhino3D and BobCad jumped ahead of the old 3rd place, Autodesk Inventor.  NX also gained very respectably.

Good on Rhino3D and BobCad for their paid market share gains this year.  We have a copy of Rhino3D here at CNCCookbook and I can tell you it’s an excellent package.

The interesting thing about free, is just as nature abhors a vacuum, shareholders abhor a lack of profits.  Sooner or later most free things tend to get a lot less free.  Free is typically used as a tool to accelerate growth until market dominance can be achieved.

Pros need different capabilities than Hobbyists, and they can afford to pay more for their tools.  For example, Pros need to be able to exchange files in whatever format their customers operate, so it is much more important for them to use higher market share products.  Pros also care how easy it is to hire folks who already have the skills to use whatever software they’ve chosen–also an argument to buy higher market share software.

Here are the CAD Package Market Shares for Pro Users: 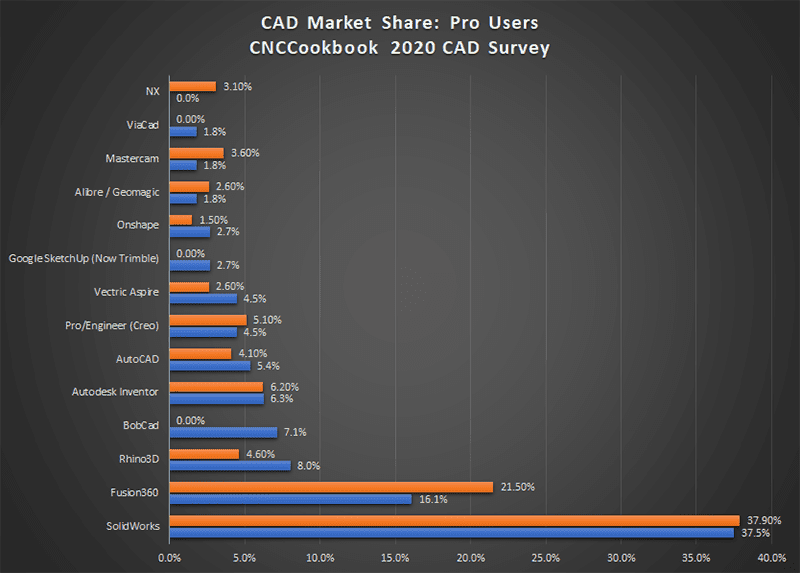 The biggest thing I see here is a slide in Fusion 360 share downward and an upward slide for BobCad and Rhino3D.  Vectric also had a very decent uptick.

The Fusion360 slide bears watching next year.  It’s the first real slide I’ve seen in any of their numbers, so it may be an anomaly.

Meanwhile, Solidworks continues more or less unchanged and unchallenged as the market leader.

And here is the CAD Package Market Share for Hobby Users: 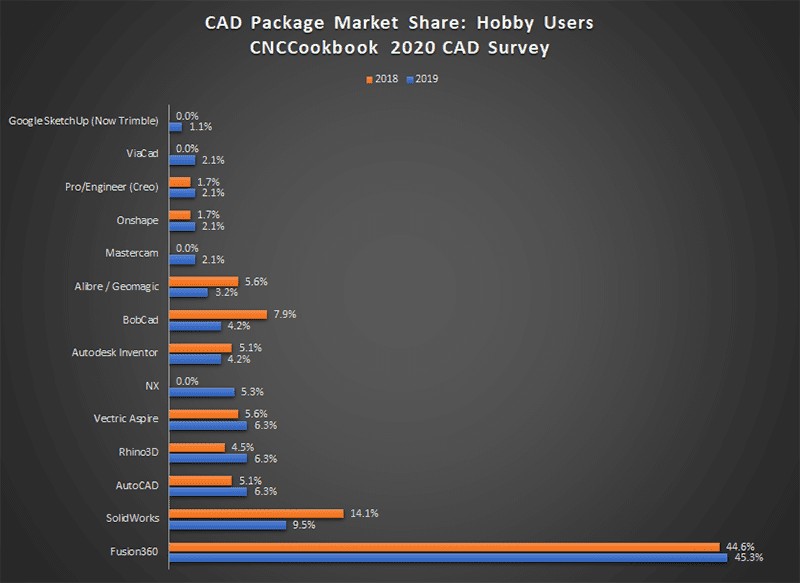 Here there is a role reversal.  SolidWorks is down quite a bit (naturally, it can be expensive) while Fusion360 is relatively unchanged.  Rhino3D had a nice climb as did NX of all things (very professional package!).

Losers with share slides included Alibre and BobCad (as well as the aforementioned SolidWorks).

I’ve saved the best for last.

Respondents were asked to rank satisfaction with their production package as: 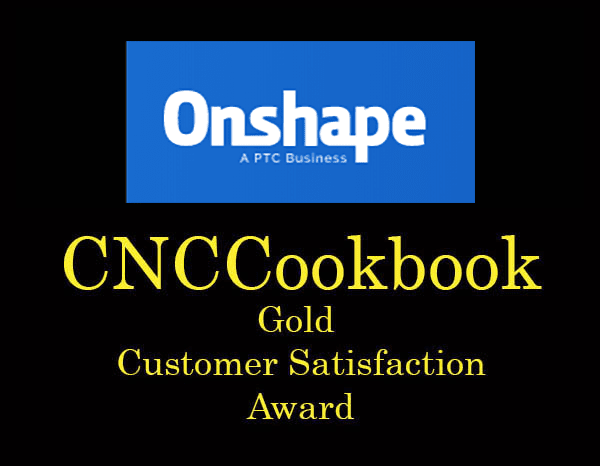 Congratulations to PTC and the Onshape team for taking the Gold Customer Satisfaction Award! 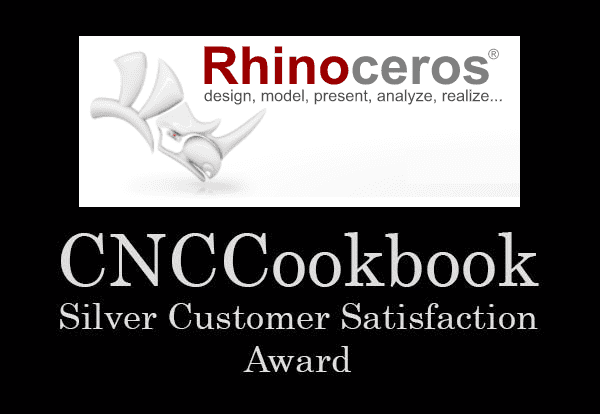 Congratulations to Rhino3D for taking the Silver Customer Satisfaction Award.  FWIW, I like Rhino and use it a fair bit.

Here are the Customer Satisfaction detail scores for the last three years of our CAD Surveys: 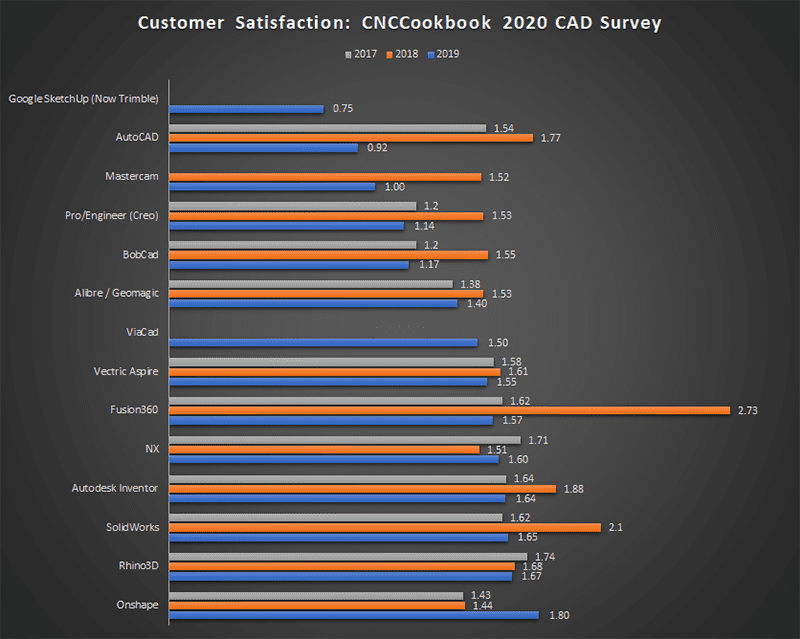 There are some really big moves here:

Did we have a particularly grouchy bunch of reviewers this year?

Here were the averages: