It’s time to present the results of our CNCCookbook 2018 CAD Survey.  I will present the results in several installments in the form of updates to this article.  If you’re part of our email newsletter (signup is below this blog post), you won’t miss one as I will announce each update.

Without further ado, here is the first installment!

There were just over 400 responses to our question about production CAD packages.  Thank you all very much for participating!

In all, 43 packages were represented as being used in production for 430 respondents.  Here’s what the overall share looks like without any attempt at segmentation.  Let’s start with the Top 15 packages, which comprise 82% of the market: 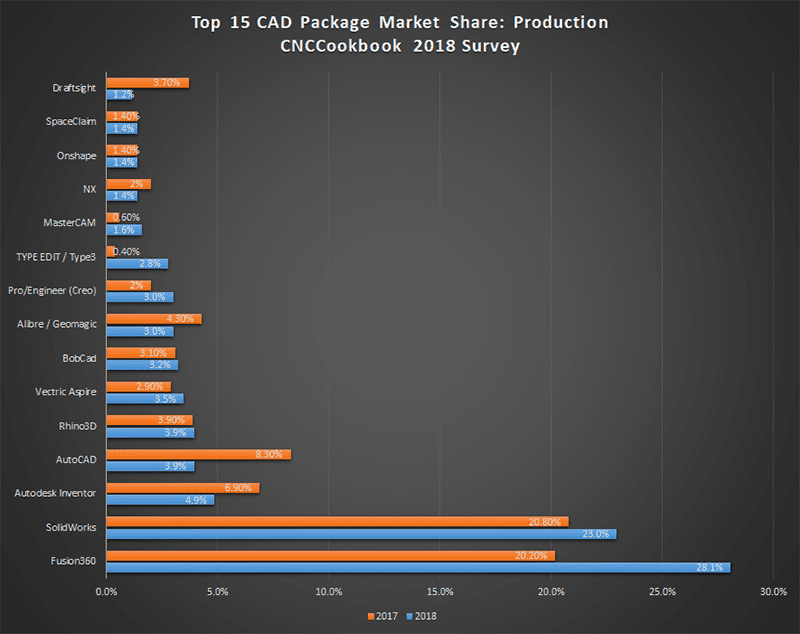 The two market leaders, Fusion 360 and SolidWorks continue to grow like crazy, although Fusion 360 has taken over the lead position from SolidWorks for the first time.

It’s interesting to look at Autodesk’s combined share for Fusion 360, Inventor, and AutoCAD, because the latter two lost considerable share.  The combined share in 2017 was 35.4% and in 2018 it is 36.9%.  In other words, while Autodesk grew over all, most of the Fusion360 growth looks like folks moving off AutoCAD or Inventor and onto Fusion 360.

Solidworks, OTOH, while no longer in the lead, grew by much more overall.  Most of the other players were flat to down.  The two leaders are slowly absorbing the market.

As a well-funded modern Cloud participant, I keep an eye on OnShape, but it’s not faring well–flat since 2017.  For this audience, CAM matters a lot and OnShape doesn’t have particularly good solutions there.

If Market Share represents packages in production, packages tried is closer to being “Mind Share.”  If you’ve tried a package, you’re aware of it so it has some mind share.  We can also learn from the ratio of production market share to “tried it” market share.  A package that has been tried by many and adopted by few is obviously different than a package where the majority who try it adopt it.

In aggregate, 64 packages were tried some 1795 times.  This suggests the average respondent tries about 4 packages before settling on one, up from 3 packages tried last year.

The 15 most commonly trialed CAD packages account for 84% of the trials: 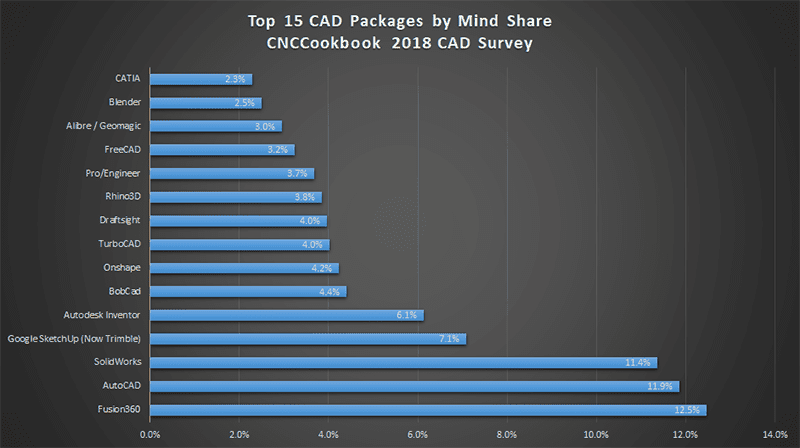 Autodesk and Solidworks dominate the mind share, though the Google/Trimble SketchUp product is in their midst.  Everyone else is pretty flat compared to last year.  They’re stuck unable to access new audiences, perhaps.

What about that adoption ratio?  How many who tried wound up buying?

Here are the adoption results for the 15 Top Production Market Share CAD Packages:

Treat the numbers as relative, not absolute.  Draftsight does not have a literal 29% adoption rate if you try it, but MasterCAM’s adoption rate really is that much stronger than Draftsight’s.

These numbers are indicative of satisfaction achieved during a trial when evaluating the software.  If the vendor is successfully getting their word out, then all other things being considered, the Adoption Rate should tell us who will grow by next year’s survey.  Let’s see how that goes.

MasterCAM looks good on this scale, but truthfully the sample size for them is pretty small.  It’s much larger for Vectric and Type3, who seem to be bonified contenders.  Last year Vectric was the leader on this scale and they’re #2 this year.  Fusion 360 has slightly edged out Solidworks vs last year where it was the reverse.  I’m not sure the numbers can be read that closely though–both have nice momentum on the journey from trial to purchase.

Much like our CAM Survey, we can see that Fusion 360 is here to stay, but the major players aren’t going anywhere either.  Like last year, a question was asked to determine the relative Free (plus educational and pirated) share vs paid share of the packages. 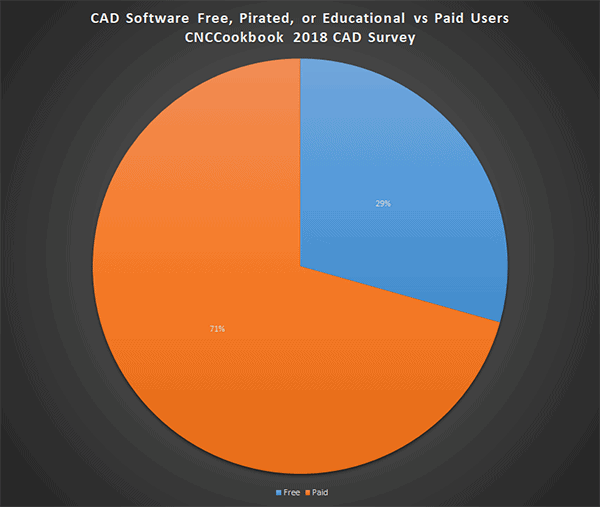 We get about 29% Free/Pirated/Educational vs 24% last year, so this segment is definitely growing.  Thank Fusion 360 for that.

In the next installment, I will be covering the market share of free vs paid packages and much more.  If you aren’t already on our email newsletter list, be sure to sign up so you won’t miss an installment.  The form is right below, and you’ll receive access to a bunch of other perks and premium content.