Who Else Wants Cheaper CMM? 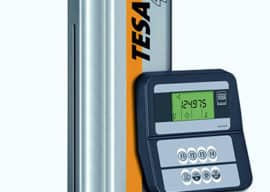 I am a total Metrology and Measurement Freak.  I’m from the school the says, “If you can measure it, you can make it to that tolerance.”  I want to know what’s going on in hard numbers.  Consequently, I have collected a fair number of Measuring Tools over the years–probably more than I really need given the types of projects I work on–I’m not building super-precision Aerospace components.

I get a lot of use out of my granite surface plate, height gage, and various accessories.  For a long time, I have wanted to upgrade my existing Mitutoyo Height Gage to one of the fancier motorized height gages, such as this one from Tesa: 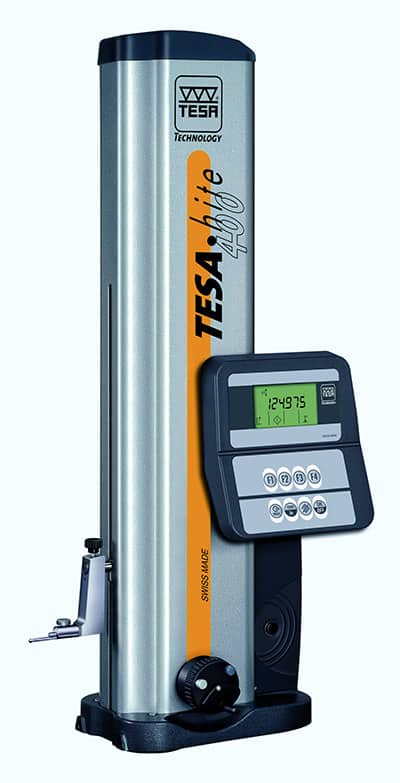 A variety of companies make these, and they come up from time to time at quasi-reasonable prices on eBay–several thousand dollars.  It would be an expensive luxury, but it would take my measuring capabilities to the next step.

The most potent measuring devices in the CNC arsenal are coordinate measuring machines or CMM’s.

They’re quite a bit more expensive than the height gages, but a friend managed to snag one for about $6000 for a project he was doing.

Today, all that is history.  Thanks to CNCCookbook reader Lloyd, I have seen the future and it is a nifty small CMM that will be similar to the Fowler ZCat.  The ZCat is my new object of CMM Lust. 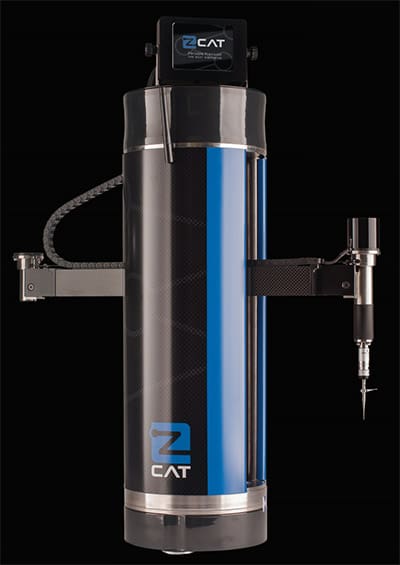 The Fowler ZCat is the world’s first portable DCC CMM.  “DCC” means it is “Direct Computer Controlled.”  In other words you can program it from a PC and the inspection measurements it collects can go back to the PC and be stuffed into an Excel spreadsheet.  This communication happens seamlessly over a WiFi connection.  This sleek little cylinder weighs only 30 lbs, so it is completely portable.  It can even run on internal batteries for up to 4 hours.  If Apple were making an iCMM, I suspect it would come out pretty similar to the ZCat.  As a matter off fact, according to Fowler, it uses the same touchscreen as an Apple iPhone.

I like the very tactile “Grab and Go” programming model the ZCat uses.

Challenge: We Need a Prosumer CMM

Now for the bad news.  I have to sell an awful lot of G-Wizard Feed and Speed calculators to buy a ZCat–the price as I write this is $39,995.  It’s probably not going to happen for me, even though ZCat is less than a lot of CMM’s out there.

We need a Prosumer CMM for smaller shops and hobbyists.  I got the “Prosumer” term from the Digital Camera market, but it applies to many markets where there is an intersection of hobbyists and professionals.  It refers to that unique segment where the device is just powerful enough to be useful to many pros but still falls into the price range a hobbyist could manage.  What if you could purchase a machine similar to the ZCat, albeit somewhat lower performance, but it only cost $10,000?  That would be a Prosumer CMM.

Is it doable?  I don’t know why not.  The active ingredients in this little CMM are:

We’ve seen companies like Tormach boil down the cost of the motion control for nice Prosumer CNC milling machines.  Their latest machine, the Tormach 440, gets you a very decent machine for about $7500.  The math for a $10,000 CMM seems to work out from there.  There’s a lot in the Tormach 440 we don’t need:

Suppose for the cost of all that we can get 4 axis motion using servos instead of steppers–a CMM will need the higher resolution especially on the rotary axes.  It seems doable.  To that we will need to add a couple of glass scales and a probe.  Even at Tormach’s retail pricing for their probe, we should be able to get there.

BTW, here’s a video by Homer Eaton, the man who invented both the zCat and the Romer Arm that tells how they make the zCat super accurate:

I don’t know if Tormach or any other company would have any interest in a Prosumer CMM.  Even if not, it’d make a heck of a project for a dedicated CNC hacker to tackle.  I can’t wait to see what the future of Portable CMM’s will bring!