What a Difference a Radius Makes: CAD/CAM Trick 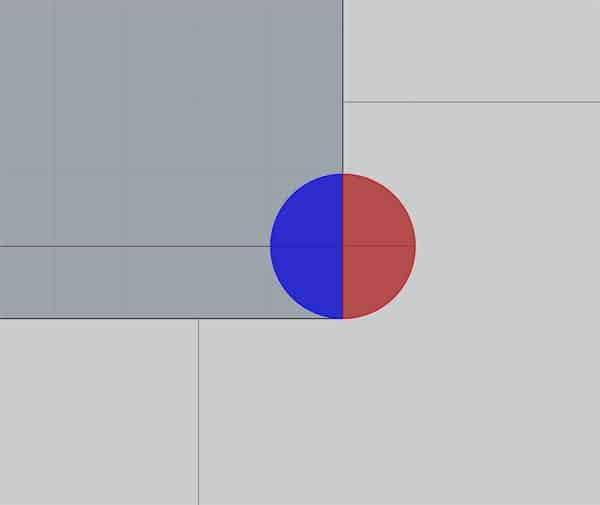 We’ve all seen the amazing feeds and speeds that are possible using HSM Toolpaths.  These fancy toolpaths work because they keep the cutter from plunging blindy into corners where the cutting forces double or triple almost instantly.  Those corners are like pounding the end of the cutter with a hammer.  Once you make that pain go away, it’s no wonder you can machine much more quickly!

But there is more than one way to skin that cat.  Consider the case of the humble corner again.  Here’s a schematic view of a 1/2″ cutter plunging into a corner at the point where it reaches maximum pain:

Full corner engagement.  The red is the part of the endmill actually cutting.

That poor cutter had been tooling along (pardon my pun) minding its own business at a 1/4″ (half diameter) width of cut, and suddenly, in the length of time it takes the cutter to move 1/4″ into the corner, the load has doubled.  Boom!  There’s that hammer blow.

We’ve all heard that little squeak of chatter that comes just in the corners on a job.  That’s another reflection of what’s being shown here.

The red portion indicates the part of the cutter doing the cutting.  It’ll roll off as the cutter turns up, but this is the point of maximum engagement.  It’s easy to see the so-called Tool Engagement Angle is 180 degrees.  Keep in mind that when you read an endmill manufacturer’s recommended feeds and speeds, they have to assume you will make some cuts like this from time to time.  Perhaps even every time you pocket.  If you do this sort of thing a lot, you’ve got the right feeds and speeds.  But, if you’re using HSM Toolpaths that avoid this, or if you are using some other tricks I will mention in this article, you can go a lot faster.  Or you can enjoy a lot better tool life if you prefer.

Using a Radius to Make a Corner Easier

In the previous example, our endmill had to turn a sharp 90 degree corner.  Assuming we’re using a 1/2″ endmill, the actual part will have a 1/4″ radius instead of a sharp corner.  Round tools leave a radius.  In some sense, it’s a waste to make the tool take that sharp right angle turn when we’re going to have a big lazy radius on our part anyway.  That leads to the question of, “What happens if we make the radius on the part a little bigger?” 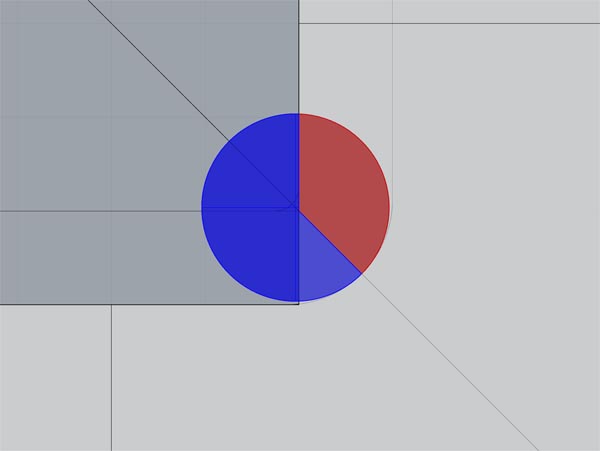 Just that little bit of extra corner radius made life so much better for our poor cutter.   The official number is that the extra 1/32″ of radius resulted in 27% less engagement for the cutter.  Let’s put on our marketing hat and make that sound even better:

Compared to machining a 1/2 diameter width of cut, the full corner doubles the cutter force almost instantly while the additional 1/32″ of radius only increased it by about 45%.

Dang!  That cutter is loafing now.  I crank crank up the feeds and speeds for sure.  Our G-Wizard Feeds and Speeds Calculator can tell you how much faster if you know the engagement angle.  In this case, it went from 180 degrees to 142 degrees.  For aluminum, a 1/2″ carbide 3 flute cutter, 1/2″ depth of cut, 1/4″ width of cut, G-Wizard gives us 7600 rpm and 64 IPM feed for the full corner.  With the additional radius and new engagement angle, it gives us 10,000 rpm and 110 IPM.  Wow, now we’re cooking!

What if we change the cutter size instead of the corner radius?

Aha!  I see you’re getting the idea.  We have to use a cutter that is no larger than the smallest radius called for on our part, at least for the finishing pass.  But, there’s no law that says we have to use a cutter as big as the smallest radius.  We could choose a slightly smaller cutter.  This will force our CAM programs to roll the cutter along a little radius in the corner rather than taking that sharp corner turn.  It gives exactly the same sort of effect as the example above.  Keep in mind that you are making a tradeoff:

–  Larger cutters can remove more material and they are more rigid, so they can cut more before they start to deflect too much.  However, they may have to negotiate corners more slowly.

–  Smaller cutters can’t remove as much material and they less rigid, so they are more limited by tool deflection.  However, they may be able to blast through a corner by comparison.

I haven’t worked out all the numbers, but I wonder if a clever shop might observe that having lots of odd-sized cutters that are only slightly smaller than normal “round number” radiuses gives them a real productivity advantage.

Consider these odd sizes versus round numbers:

When you get ready to do a part, take a careful look at the various corner radii being called for and see whether there is a tool size that might be perfect because it is just a little bit small.

Conclusion:  Change Your Design or Tooling to Increase Productivity

As we’ve seen, changing the design by increasing corner radii above standard endmill sizes can really help.  If you can’t change the design, sometimes there are “odd” tooling diameters that can also work.  These are easy changes to make that can really help.

Let me give you one more thing to think about.  With a radius, your CNC control has to decelerate less for the corner so unless you have a pretty smart control with lots of good lookahead and all that, the corner may not be able to run at full feedrate anyway.