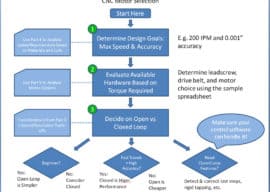 This is the sixth installment of our Ultimate Benchtop CNC Mini Mill series.  The series is dedicated to helping DIY CNC’ers work through the design considerations and tradeoffs for their CNC Mill projects.  Here are the installments so far:

Part 2:  CNC Mechanicals (Ballscrews and Such)

In this installment, we’ll wrap up the process for selecting your axis drive motors, leadscrews, and timing belt drives.

Time to wrap up the last 3 articles on factors that influence motor selection.  Let’s start with a flow chart of the motor selection process and go through it, step-by-step: 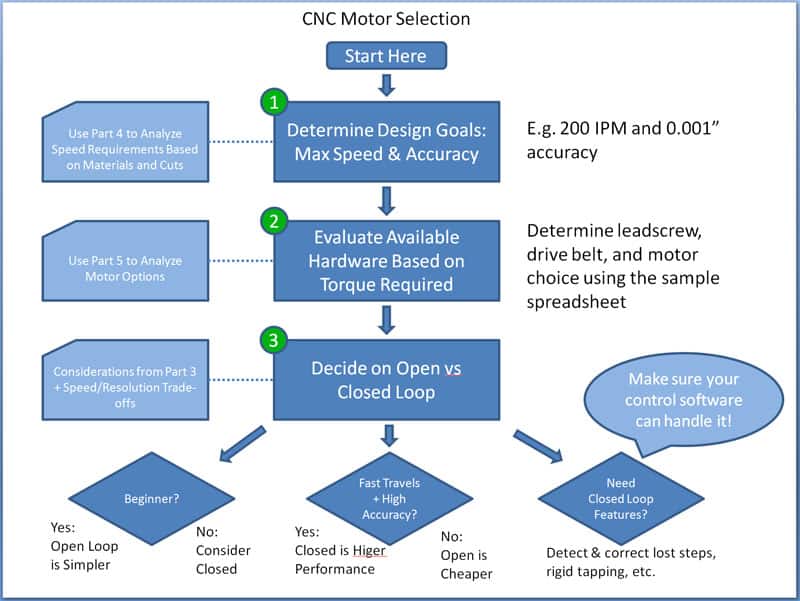 Before we can get very far choosing motors, we need to pick some design goals for our project:

–  How fast do the axes have to move?

–  How accurately must we position the axes?

We could probably also select an acceleration, but let’s save that for a later step.  These design goals should reflect Real World considerations and not just be pulled out of a hat.  In Part 4 of the series, we covered how to analyze the speed requirements for both spindle and table travels based on the materials and types of cuts we’d be using with the machine we’re building.  Another approach is to try to emulate the performance specs of some other very successful machine that had the benefit of both a lot of engineering time as well as having withstood the test of time in the marketplace with customers.

There are a finite number of motors available to you in your budget and that you can easily purchase.  These motors come in a finite set of torque ranges.  Likewise, there’s a finite number of leadscrews available.  Now you’ve got a multiple choice equation to solve.  Using the worksheet provided in Part 5 of the series, plug in your available options to see what combination works.  An afternoon spent on this worksheet with your motor and leadscrew catalogs handy will soon get you dialed into the right ballpark.  After that, it largely becomes a matter of cost tradeoffs.

For hobbyists, servo choices are more limited.  Your performance and budget requirements may have already eliminated them from consideration.  If not, there are three likely criteria on which to make the decision:

1.  Beginners should avoid closed loop.  I’ve done both.  There’s more wiring, more noise issues with sensitive encoders, potential issues tuning the servos, and just generally more complexity.  A lot can be done with a nice Open Loop DIY CNC.  Get your first one under your belt and then consider Closed Loop.

2.  The combination of fast travels and high accuracy is tough for steppers as you’ll discover soon enough working with the spreadsheets.  They develop their torque peaks at lower rpms than servos and they start out with lower resolution than most encoders.  You wind up needing to use the gear ratios of the leadscrew and timing belt system to hit the high speeds by multiplying the stepper speed, but that reduces the resolution of the system.  It’s a vicious cycle.  All that said, work the numbers.  Plenty can be accomplished with an open loop system, it’s just going to run a little slower.

3.  Closed loop features.  There are a lot of very tempting ones.  Just eliminating lost steps is a big deal if you plan to do actual production on your machine and not just use it for one-offs.  OTOH, make sure the available control software can actually support the features you’re turning to Closed Loop to provide.

By now, you have the tools needed to size your motors and the drivetrain (leadscrew + timing pulleys if needed) needed to set your machine in motion.  Next installment will be about automatic toolchangers.  Stay tuned!