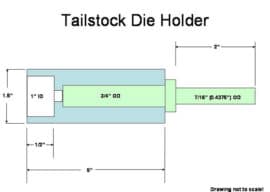 Editor’s Note:  This was one of the first manual machining projects I did many years ago on my new manual lathe.  I used it for many years after that.

Somehow, I always manage to open a lot of cans of worms before I complete anything. In this case, I was working on a chuck backplate to mount my Buck 6-jaw chuck, when I realized it would be mighty handy to have a tailstock die holder. There are a bunch of folks who have made these and given information on the net for how to go about. I took a gander at those and then decided to just wing it with a design of my own. It borrows heavily from many of these sources as well as taking advantage of some items I had on hand such as the hex stock. Here is the basic idea: 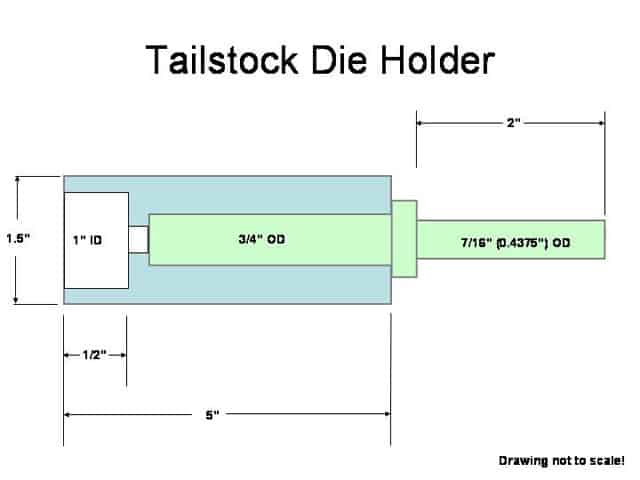 Making the die holder was very simple. There are two pieces–the arbor and the die holder itself. They can be made out of any arbitrary thing, but I happened to have some stainless rod in 15/16″ diameter for the arbor and the really cool piece was some 2″ 12L14 hex bar stock. It seemed perfect since the set screws that hold the die need to be drilled at exactly the angle of the hex sides. I must say that both the stainless and the 12L14 also machined very nicely with my carbide insert tooling.

1. Turn and face the big 3/4″ end to size, leaving the enlarged flange to serve as a stop against the hex die holder. I used a 3-jaw chuck as this is not a particularly precision piece we’re making.

2. While you’re at this end of the arbor, I’d cut a 45 degree bevel on the big end and file of any burrs with a well-chalked file. I bought some railroad chalk from Brownell’s and it sure makes the files cut nicely. I also got a batch of wood file handles on eBay that keep things safe and comfortable when filing on the turning workpiece. It doesn’t take much filing–you just want to knock off the sharp edges and any burrs.

3. Flip the arbor around in your chuck so you can work on the little end. Since my drill chucks are all 1/2″, and I want to park this thing in the tailstock drill chuck rather than messing with turning a taper (maybe another time), I turned it down just a scosh less than 1/2″ to 7/16″. By the way, it’s good practice to see how close you can get to these dimensions. They don’t really matter on this piece, but you may as well try to hit the numbers. You’ll learn a lot about your lathe as you’re doing so.

4. Finish up with some nice 45 degree bevels in appropriate places. You can see from my photos what I thought was appropriate. I turn the bevels with the top slide set at the 45 degree angle and do the final clean up with a few passes of the file. Works great!

1. The central issue here is that darned center hole that has to go all the way through and is a fairly large diameter. Chuck the hex up in your 3-jaw (yep, it fits real nice with its shape to the jaws) and start out facing the end. I’ve about decided I need to always face the ends of these things as soon as they’re in the chuck, and maybe take a light turning cut too after forgeting to do so a couple times and having to go back!

2. Now center drill the end with your tailstock drill chuck, and start working your way up to the largest hole you can drill. If you can go all the way to 3/4″, more power to you! I could only go to 1/2″, and I did so, slowly, and laboriously. Fortunately, I was able to drill all the way through the hex piece, but only barely. You need to be really careful to back out and clear the chips, and you need a lubricant. I use Tap Magic, generously applied to the bit with a chip brush each time I clear the chips. This operation will take ridiculously long, but such is life.

3. When you finally finish, you need to decide which end you’ve got and what you want to do. I chose to do the die end first, so out came my boring bar. Initially I tried my small 1/4″ bar–it was worthless for this! I next broke out a 1/2″ bar with carbide insert and it did the job like cutting through butta! Very nice. Work out to the die diameter slowly, checking carefully and cutting less the closer you get. You don’t want to overshoot! The hole I needed for my dies was slightly over 1″. Trial fit a die as you get close and take it easy how much you cut. Remember, what you turn on the dials goes 2x to the diameter!

4. My last step on the die end was to put a little inlet bevel to help guide the die into the hole. It’s another one of those 45 degree tapers I turned by setting the top slide at a 45 degree angle and cutting across. Note that you will have to use the boring bar on this ID to get sufficient clearance.

5. Okay, flip the piece around and let’s work on the other end. Begin by facing that end (natch!).

6. The big job here is to bore the 1/2″ hole to be a 3/4″ hole. This is a deep deep hole and I was quite worried about how it would turn out. There were visions of broken and jammed boring bar going through my head. No problemo! I took it slow, and backed out to clear chips halfway through each pass. It was an hour long process, but I used the leadscrew as a power feed so it really wasn’t too bad. Again, as you are getting close, take shallower cuts and measure frequently. When you get really close start trial fitting the arbor.

7. Once you have a good fit for the arbor, you might want to add a few decorative touches as I did. I was mostly just experimenting and learning. I started by turning about 7/8″ of the back of the die holder from hex to round. The interrupted cut made an interesting buzz saw noise as the pointed edges struck my carbide insert, but there were no ill effects and I soon had a very pretty round shoulder there. I tried a knurl, which didn’t come out too badly, but I couldn’t run it all the way up to the hex part without hitting the holder, so I gave up and turned the knurl down and off. I decided to finish by beveling the end of the hex as well as the cylindrical end of the die holder once again by setting the top slide at an angle, cutting, and then cleaning up with a file. I felt it came out looking really nice! All of this silly business is completely for decoration, so if you want pure function, just skip it.

8. The last step was to drill and tap the set screws. This was easy because of the hex shape, and I simply used my drill press and piloted tap holders.

The hex shape made me wonder whether I could get by without Tommy Bars, but in the end, I decided it would be fun to try a knurled handle for the project. As you’ll see from the pictures, I wound up with a very light knurl–not enough pressure used. I think it looks fine but I’ll be pressing much harder the next time. Incidentally, this little Tommy Bar is exactly the right proportion for this lathe and feels great in the hand. I also considered briefly going for three of these, but one works just great.

Let’s see how well it all came out: 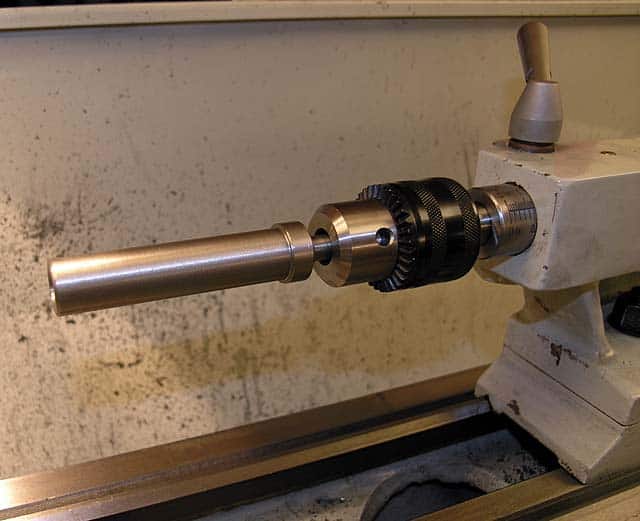 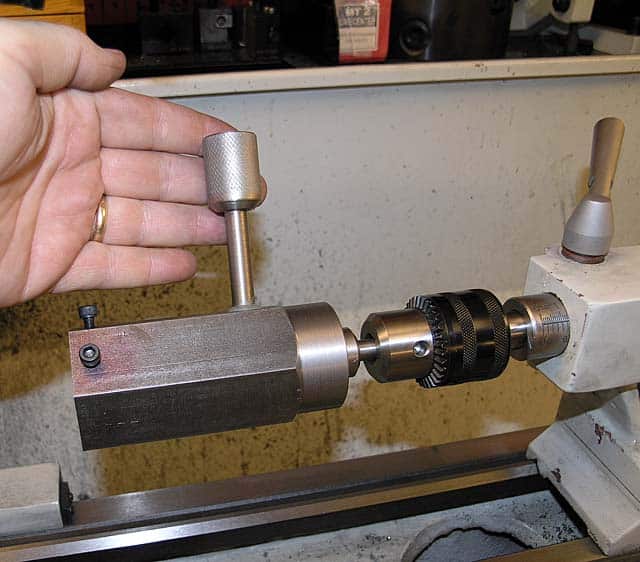 The rest of the Die Holder on the rod. The Hex Stock is nice for this sort of thing!

I rather liked the decorative touches. I know some folks are not into all the little bevels and some are only interested in the function. Somehow the piece just looks more professional if you add the touches. Guy Lautard remarks on this in one of his Machinist’s Bedside Reader series with the feeling that if you are going to be a real machinist you had better do some quality touches like this. I quite agree, although I have a long ways to go before I can consider myself much of a machinist! Now I can go back to making that pesky backplate for my 6-jaw chuck.

Back to Lathe Central…