6-Jaw Chuck [Making a Backplate for my Buck]

6-Jaw Chuck [Making a Backplate for my Buck]

I’ve always been enamored of 6-jaw chucks. If nothing else, they are things of great mechanical beauty. I notice that many machinist’s I have a lot of respect for prefer them to the average 3-jaw for fine work, for example 5Bears and the Machine Shop Trade Secrets book. In fact, if you go through the latter, there is hardly a picture to be found of a 3-jaw–it’s all 4-jaws and 6-jaws. There is no surprise when you consider the advantages of a 6-jaw chuck. Given all that, it wasn’t long before I went hunting for and found a high quality 6-jaw chuck on eBay. Mine is a 5″ Buck Chuck with the fancy set-tru capability. Having purchased this little beauty at an enormous discount from full retail, my next chore would be to machine a backplate so I can fit it to my Lathemaster. This will be my first project that had to come together with any degree of precision.

Follow along while I plan and execute this project. 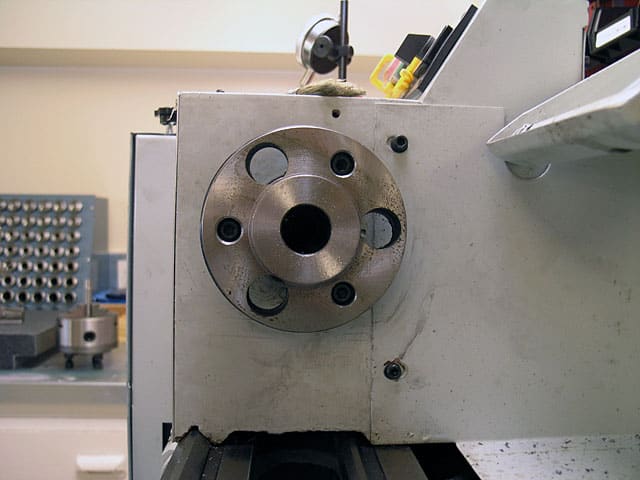 My main concern is that the chuck be accurate on the lathe. It is an expensive chuck, particularly with the set-tru capability, and I want to realize its full potential. With that in mind, the first order of business is to machine the interface with the chuck spindle. If we do that, we can actually mount the adapter to the spindle and carry out the remaining machining operations from there, thus ensuring maximum accuracy (I think).

Getting the spindle interface right is a matter of getting 3 mounting bolts positioned exactly correctly as well as boring the proper hole for the spindle nose. This spindle nose measurements are thus: 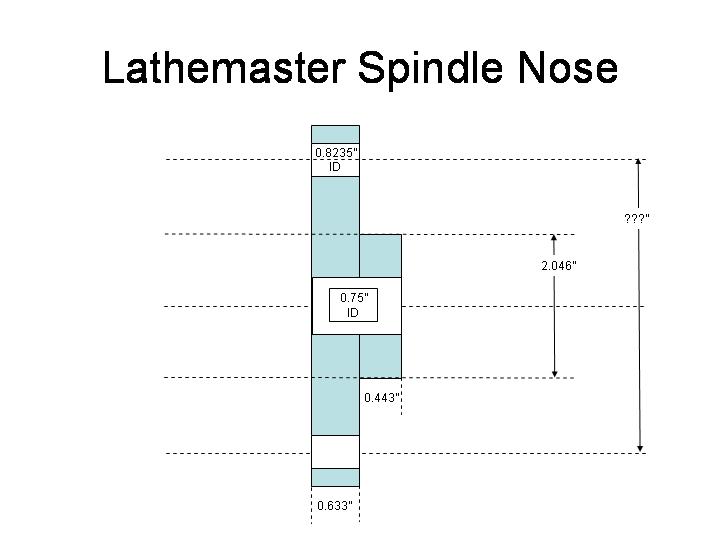 The closest and most important fit is with the spindle nose 2.046″ diameter to a corresponding hole in the back plate. The 0.8235″ spacer holes are a less tight fit, but we are placing them using a bolt circle, which is a calculated layout. I’ll be double and triple checking it to make sure I get that bolt circle right!

On the other side of the adapter plate is the interface for the Buck 6-Jaw chuck. In this case, we have 6 evenly spaced bolt holes for bolts that will hold the adapter plate to the chuck, together with a hole in the chuck that accepts a nose on the adapter. This hole is where the set-tru feature comes into play. Within the hole are 4 Allen head adjustment screws that enable the chuck to be moved radially versus the axis in order to get it exactly aligned to the spindle’s axis. Dimensions for the Buck chuck look something like this: 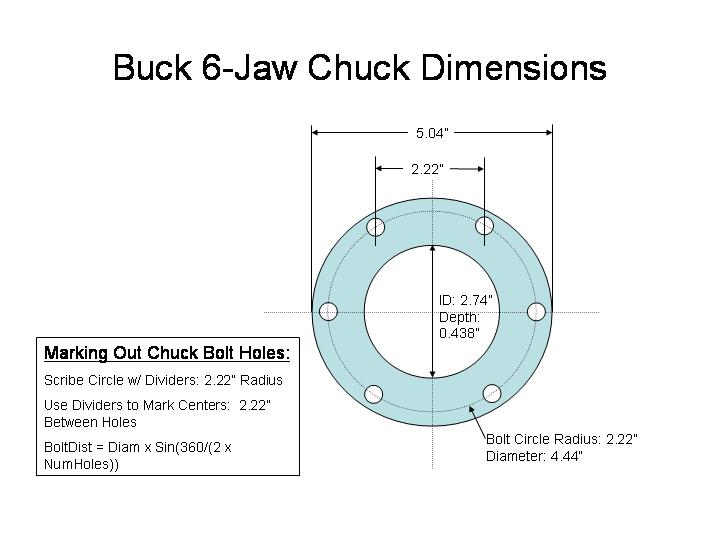 There is some good news here. For example, the spindle nose diameter (2.046″) is smaller than the set-tru hole (2.74″). This means that the hole needed for the spindle hole can ride comfortable as a bore inside the nose that mates with the chuck.

Here is a Rhino 3D model I made immediately after I got Rhino. This was after I’d already made the backplate: 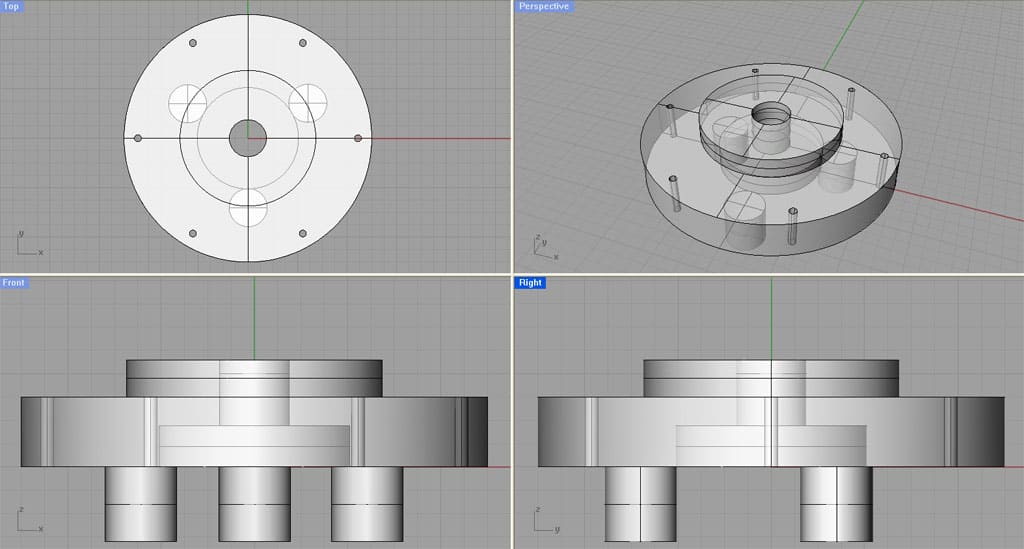 I purchased a couple of cast iron round pieces from www.metalexpress.com. A lot of materials would work, but the cast iron is pretty easy to machine, and is often used in machine parts where a hardened piece isn’t neccessary. I bought 2 pieces that were 2″ thick by 6″ diameter. This is pretty large, but I have another lathe chuck I also need to make a backplate for that is a 6″, and they didn’t have much between 5″ and 6″. We’ll see how painful it is to rough out so much material. Given the mess involved with machining cast iron, I would be tempted to go mild steel the next time around. A piece of 12L14 would be much easier!

I’ll tell you right now that the way I did this was wrong in several ways. What follows is what I actually did, so you can observe first hand the confused thought processes of a novice. It just goes to show how important it is to really plan the job ahead of time and not just meander around doing what pleases you. At least that’s true if you care about proficiency at all. I must say that I still had a heck of a good time with it and learned a lot from my mistakes. 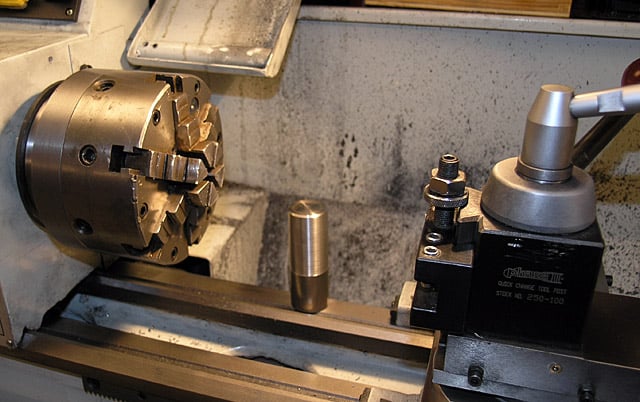 The chuck installed together with the first trial piece turned. Runout adjust easily to 0.001″ with Set-Tru! 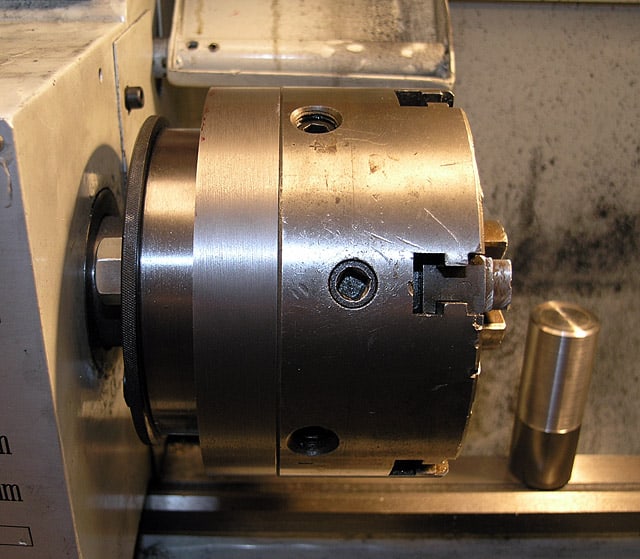 This is an experienced chuck–some dings! 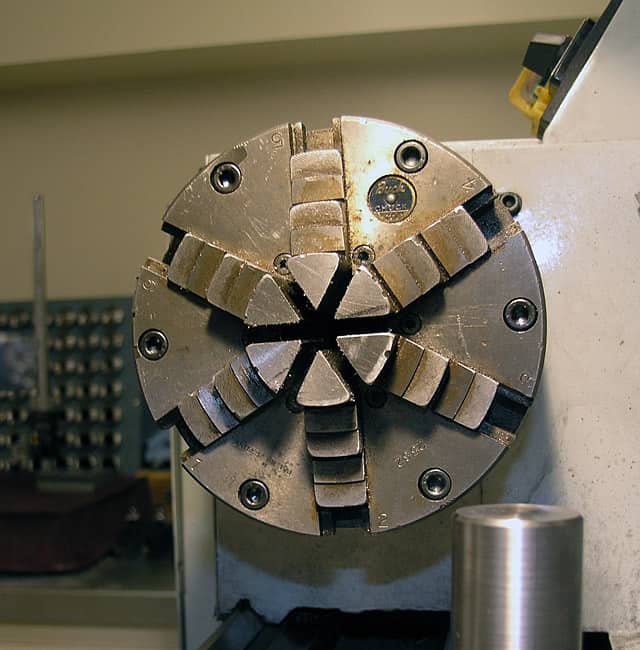 It is a beauty though, no?

When all was said and done, was it worth it? I have to say it was a worthwhile project for me. I got the chuck on eBay for $240, which is much less than the new cost for the chuck. In addition, it was good experience to make the backplate. I have to say that the feel of this chuck is far superior to the Asian chucks that came with the machine. The key is silky smooth, with virtually no trace of backlash.

– My method of using a bolt to hold the initial blank until I could machine a spigot a chuck could hold worked very poorly. There was tremendous chatter involved. I’ve seen someone else center drill the bolt and bring a live center in to the equation. That, and a much large bolt seem like must haves for the next go-round with this. OTOH, I got through it without harming the lathe or myself so maybe I shouldn’t sweat it!

– It’s hard to lay out precision bolt circles by hand. The circle for the 3 spacers was off on 1 spacer by 5 thousandths. It was that much closer to center than the other 2 holes. I fixed it by turning down that spacer to a slightly smaller diameter. In future I’d like to find a way to lay these out more precisely.

– I drilled my 6 holes for the chuck without first facing the ends of the cast iron blank. Those ends were not square to the sides so neither were the holes. I made them slightly oversized and it all worked out fine. They’re just clearance holes. I would have been in a world of hurt had precision mattered here.

– Cast iron is pretty tough to machine! I would be tempted to use 12L14 the next time. Looks like I will get the chance as I need to make backplates for 2 more chucks.

– I am suspicious of the accuracy of my cheap Asian drill press. Eventually, I will own a mill which will be much more accurate. Also, I drilled using a big vise, but a clamping kit would have been helpful as well.

– When I first inserted the spacers in their holes, it looked like the threads were cocked. This was disappointing since I had used a piloted tap wrench to get them straight in the first place. It turned out that the threaded inserts were just too long. I used a tapered tap to thread the holes and the tapered end needs a lot of hole depth to start making threads. I solved the problem by facing some of the threads off on the lathe, doing so with a nut in place so that removing the nut would straighten out any damage I did to the threads. A better answer would be to use a bottoming tap and thread the hole all the way to the bottom.

– Initially, one of the three nuts would not go through the spindle hole–I had to remove the nut mount the chuck, and put the nut on from the other side. I had assumed this was due to some of the other precision problems, but this turned out not to be the case. I tried to put a wrench on it, and while this nut was identical to the others thread-wise, it required a significantly larger nut! My brother-in-law says that my mistake was in assume to quickly I was the one with the precision problem rather than the nut factory. Go figure!