Nesting Software from Sigma Tek to MyNesting.com: An Introduction 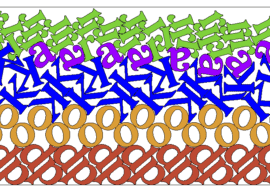 Have you heard of Nesting Software?  It’s one more piece of the CNC Software puzzle, but an important one in terms of minimizing material waste, particularly for large flat pieces of material such as you would put on a CNC Router, CNC Laser Cutter, CNC Plasma Table, or CNC WaterJet.

They say a picture is worth a thousand words, so here is a picture of what Nesting Software can do: 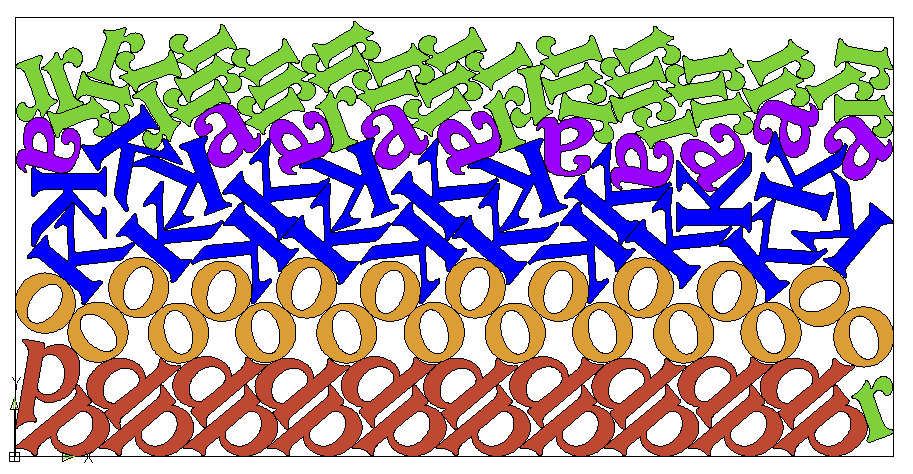 I chose that sample just because it shows familiar shapes (letters) in an unfamiliar configuration.  Imagine software that takes arbitrary outline shapes, and then rotates and positions them to maximize the number of those shapes that can be cut from the flat material.  You can see pretty quickly this is an application you want to let the computer’s raw CPU horsepower chew on and not something you’d want to have to do by hand.

Typically, nesting software takes in some sort of CAD files that give the part profiles.  Only 2D information is needed, so something like a DXF file does this fine.  Wants you’ve imported your part outlines, you give the Nesting Software a few more pieces of information.  How many of each part do you want?  What’s the minimum distance between parts?  Different cutting processes need different between part clearances.

Tip: Check our library for free DXF files that you can use to play with these nesting programs.

Once you’ve given the software enough information and hit the “Go” button, it starts trying to find the best nesting for your parts.  Each time it finds a better solution, it’ll flash up a new nesting layout sheet (similar to what’s shown above with the letters).  It will also give you some statistics like the total length and width needed, or the Utilization.  Nesting Utilization is a measure of how much material is used by part and how much is waste.  The higher the Utilization, the more the nesting software is saving you in wasted material.  Good nesting software will put parts inside the cavities of other parts, rotate parts to arbitrary angles, and do all sorts of things to maximize the Utilization.

The longer you let the Nesting Software run, the better the solutions it finds.  But, you’ll come to a point of diminishing returns and want to stop the software so you can get on with cutting out the parts.  At this point, the Nesting software pumps out a CAD file with all your part profiles.  You can then take that file and run it through your CAM program to feed your Router, Plasma Table, Waterjet, or Laser.

What separates a high-end nesting program from the lower end?

Of course it’s the usual stuff: more features and more performance.  A high-end product like Sima Tek’s line.  Let’s just look at a few products and the features they bring:

AutoNest is billed as a Rectangular Nesting Program

True Shape is a step up that adds part-in-part nesting and support for multi-head machines.

SigmaNest Techno has all that from the other two programs plus even more optimal and faster nesting algorithms.

Maximizer can control the other Nesting Programs by tying into your inventory software to decide exactly which parts need to be cut today.

I’m sure a Sigma Tek user or Sales Engineer could mention all sorts of features I’ve missed, but the point is, the sky is the limit with Nesting Software because it has the potential to reduce costs by eliminating waste.  The waste elimination is both from reducing waste material and from making it faster and easier to layout and cut a whole bunch of parts via automation.

How Can I Try Nesting Software?

Turns out you don’t have to buy the high-end to play with some nesting software.  You don’t have to spend a dime really, as there are quite a few free packages out there.  I’ll let you explore the field yourself, but I wanted to pass along one that I looked at and played with that seemed pretty nice for small shop use.  It’s called MyNesting.com.  It’s a service that you can sign up for and play with for free.  If you get a nest you actually want to cut, they charge you for the DXF.  It’s cheap–$7.50 for a single file down to $5 a file if you pay for 20 of them.  Also, the first one is free (isn’t that always the way they get you started?).  There’s also an option to buy an unlimited use version of the software, but this is a cheap and cheerful way to get your feet wet with nesting and see if it offers value for your shop and projects.  They have a quick demo video that shows how the software works.  Check it out.

Are you using Nesting Software today?  If so, leave a comment and tell us which software you use and what you like or dislike about it.