Axis Parallelism is a tolerance that controls how Parallel a specific central axis needs to be to a datum plane or axis. It is controlled by a cylindrical tolerance zone around a theoretically perfectly parallel axis. Surface Parallelism is much more commonly used than Axis Parallelism, but be sure to be on the lookout for cases when you have axis parallelism because it’s different. See our page on Perpendicularity to understand better how an axis may be controlled by a datum. 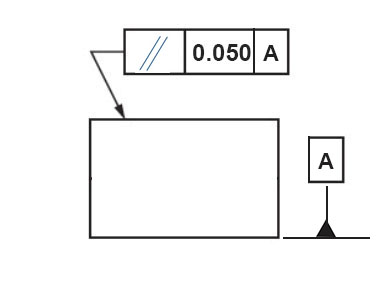 The Tolerance Zone for Surface Parallelism looks like two planes that are parallel to the datum and separated by the tolerance. Every point on the controlled surface must fall between the planes.

Gaging and Measurement of Parallelism