Having a good grasp of thread terminology is important for any CNC’er or Machinist.  Threads are an important part of our work, and so it just goes with the territory.  Fortunately, there aren’t that many terms and they’re not hard to understand.

This is your easy guide to screw thread terminology.

The exact specifications for any thread are determined by Thread Standards.  The point of having these standards is interchangeability.  You want to be able to purchase off-the-shelf fasteners for particular threads, or be sure that when two parts meant to thread together are made by two manufacturers that they will indeed fit.

There are a number of Thread Standards out there, and being familiar with the names of the common ones is all part of thread terminology.  Here are just a few that our G-Wizard Thread Calculator supports: 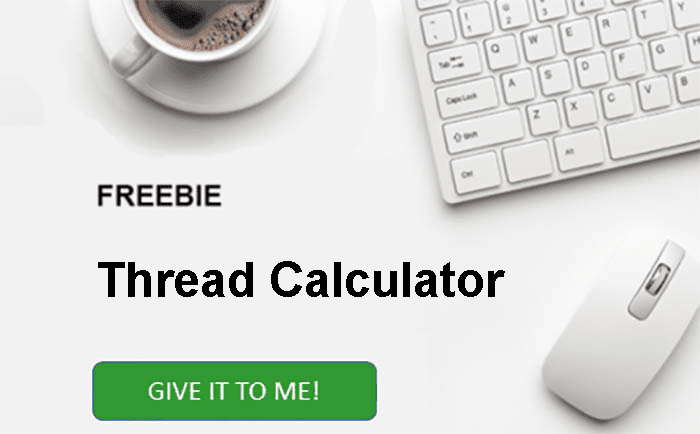 Two major styles of thread are Straight versus Tapered.  Straight Threads are parallel to the Axis.  The helix of the thread lies along a cylinder, in other words.  With Tapered Threads, the helix lies along the surface of a cone.

Tapered Threads are typically used for pipe and plumbing applications of various kinds where the taper helps ensure a tight seal. 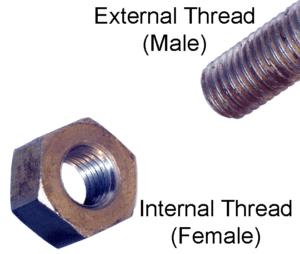 External Threads are bolt thread whereas Internal Threads are the threads on the nut that goes on the bolt.  They’ll have different measurements to provide a looseness that reduces friction and allows for manufacturing errors that are within tolerances.

Threads can be right handed or left handed.  In other words, the helix can travel clockwise or counter-clockwise.

Most threads are oriented to that the threaded item, let’s say a bolt, when seen from the point of the axis atop the bolt, moves away from the viewer when it is turned clockwise.  This is known as a right-handed thread.

The opposite direction is a left hand thread.

The usual application for left handed threads involves cases where the rotation of a part would cause a normal right handed thread to loosen rather than tighten.  Another example would be a turnbuckle, where threaded fasteners at either end must come together.

The Form or Threadform thread terminology refers to the geometry or shape of the thread “teeth”.  Typically, threads are Triangular, Square, or Trapezoidal.  The tips may have flats or radiuses as well.

On the other hand, Fine threads are stronger because they have a larger stress area for a given diameter.  They are less likely to vibrate loose because their helix angle is smaller.  In addition, Fine threads allow finer adjustment, and they develop a great Preload with less tightening torque.

Thread Families have Preferred Sizes that are defined as part of their standard.  These sizes govern diameters, pitches, and sometimes elements of the Threadform.

The Standards often also allow for Sizes that are not mentioned in the Preferred lists.  These are Special or Custom Sizes.

Multi-Start Threads have more than one helix that operate in parallel with one another on the same cylinder.

A Single Start thread has just one helix.  A Double Start has two helixes that run parallel to each other.

Diameters are a big part of what goes into defining a particular thread.

This is typically the Major Diameter, or the largest part of the external thread.

The Minor Diameter measures the diameter of the “root”, which is the innermost part (closest to axis on external, closest to part OD on internal thread) of the thread.

The Pitch Diameter is approximately halfway between the Major and Minor Diameters.  It’s somewhat of an abstract designation because there is no visually obvious feature corresponding to Pitch Diameter, but if the Pitch Diameter of the external and internal threads exactly matches, there will be no play between the two.  Hence it is an important bit of thread terminology.

The Pitch Diameter is the preferred diameter to measure when inspecting threads, and one of the most common methods of doing this is Measurement Over Wires.

The Pitch Surface is the imaginary cylinder whose axis is aligned with the thread’s axis and whose diameter is the Pitch Diameter of the thread.

Pitch is the point-to-point distance from one thread to the next at the major diameter.

Lead is closely related to Pitch.  In fact, for a single start thread, they are identical.

Metric threads are typically specified by Pitch.  Imperial threads often use the reciprocal, which would be Threads Per Inch or TPI. 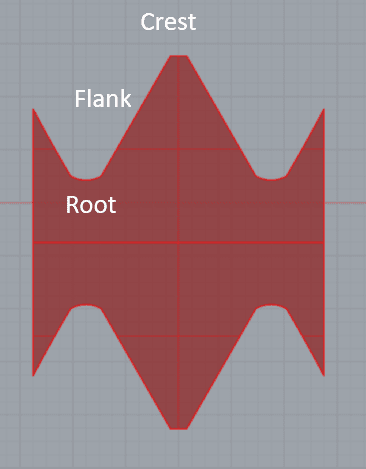 The Crest of the thread is the tip on top.  The root is the bottom of the thread.  Flanks are the straight sides that connect the crest and the root

Each Thread Standard has a particular nomenclature to be used to identify a thread.  That nomenclature is called the Thread Definition.

Classes of Fit or Tolerance Classes

Many Thread Families specify more than one Class of Fit or Tolerance Class.  These Classes of Fit tell how precisely the threads must be machined and how tightly they will fit together.

The Axis is the imaginary centerline the thread helix spirals around.

Thread Depth is the difference between Minor to Major diameter 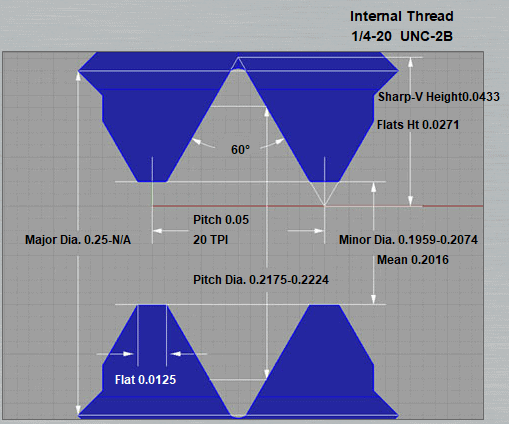