The E-Leadscrew is designed to enhance manual lathe operations using CNC-like technology without the need for CAD drawings or g-codes. Instead the operator relies on manual operations together with an optional DRO and the E-Leadscrew controller which drives stepper motors on the leadscrew (Z Axis) and cross slide (X Axis). The E-Leadscrew panel will generally be mounted either below the DRO or side-by-side as in these configurations: 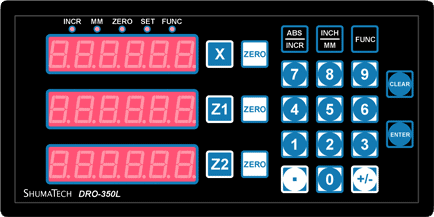 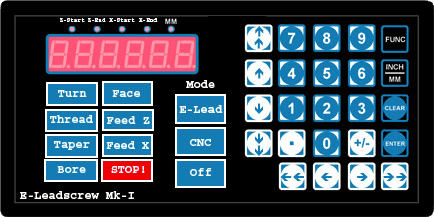 Above and Below Mounting

Entry Prompt LEDs The LED strip along the top prompts the user for what input is needed before the E-Leadscrew can complete the operation. In addition, the “MM” LED is lit when metric units are active.

LED Display Information such as the feed rate or depth of cut may be displayed on the LED display.

Thread Command The Thread command is identical to turning a shoulder except that the leadscrew is precisely synchronized with the spindle to create a thread. At the conclusion of the Start/Stop Z prompts, the operator will be prompted “TPI?” in the LED display at which point they may enter the desired TPI of the threads to be cut. Note that metric is allowable as well if the INCH/MM key is depressed.

Taper Command Taper is identical to turning a shoulder except that at the conclusion of the Start/Stop Z prompts, the operator will be prompted “TAPER?” in the LED display. They may enter a variety of choices including selection of standard tapers (MT, etc.) and entry of the degree angle of the desired taper.

Bore Command The Bore command is identical to turning the shoulder except that the X-Start and X-End values indicate travel in the opposite direction as needed for boring.
Face Command The face command accepts a Z-Start value, an X-Start, and an X-End and then prompts the user for how deeply to face. The operator may respond by slewing an appropriate amount or by entering a value on the keypad.

Feed Z Command The Feed Z command simply causes the Z-axis to continue slewing as the appropriate Z slew keys are depressed. The first depress starts the feed in the indicated direction at a default speed. Subsequent taps increase or decrease the speed by a large or a small amount. Depress Feed-Z to pause. Pressing again will resume at the prior feed. Use STOP! to stop and reset the parameters.

STOP! Command Stops all stepper motors. Resets the parameters for any active command to their defaults.

CNC Mode Passes through the step/dir signals from a breakout box to the steppers bypassing the E-Leadscrew panel and allowing a CNC program to operate the steppers. The STOP! command will still stop the steppers immediately.

Off Kills all power to the steppers so that manual handwheels may be used.

X-Axis Slew Cluster Fast/Slow slewing that runs while the button is held and stops when it is released.

Digits For typing in numeric values.

Z-Axis Slew Cluster Fast/Slow slewing that runs while the button is held and stops when it is released.

FUNC Activates the various commands needed to set up the unit (i.e. tell it how many spindle tach pulses per rev, leadscrew TPI, and so on) or operate special functions.
Inch/MM Sets units.