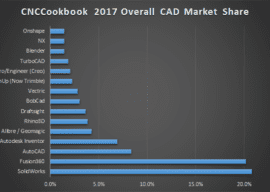 It’s time to present the results of our CNCCookbook 2017 CAD Survey.  This update adds the Customer Satisfaction Awards.

There were just under 500 responses to our question about production CAD packages.  Thank you all very much for participating!

I’ll get on to market share shortly, but first, let’s go over Customer Satisfaction.

Each time we survey, we ask customers to rank their satisfaction of their production CAD package.  The rating system is simple with 3 choices:

We then calculate a score based on the percentage of each type of response that was received.  Based on those responses, we award a Gold and a Silver Customer Satisfaction Award to the first and second place packages. 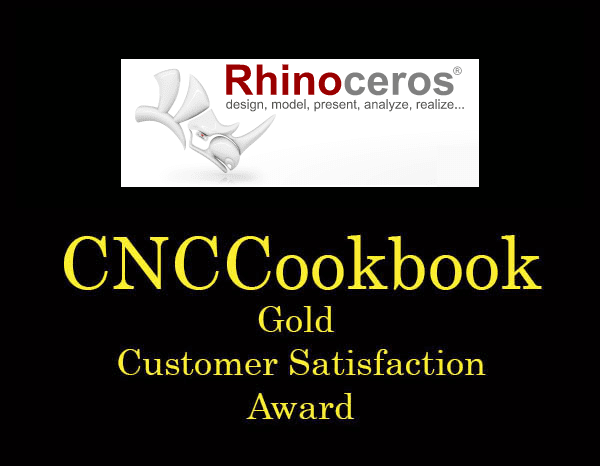 Congratulations to Robert McNeel and Associates!

A whopping 71% of respondents who use Rhino3D said, “It Rocks!”  I have to confess, Rhino3D is my personal favorite CAD package among the several I use regularly. 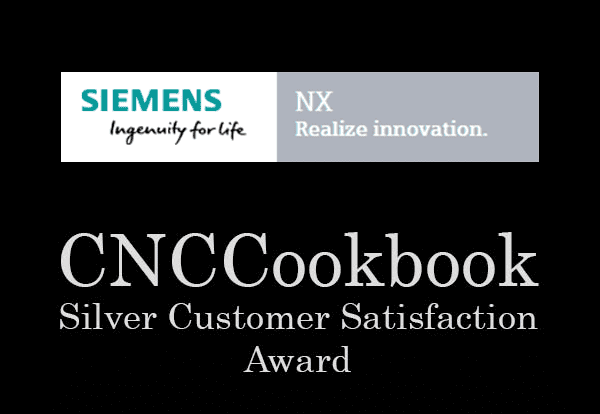 Congratulations to Siemens for receiving the Silver Customer Satisfaction Award for NX.  It was very close to Rhino3D with 71% of respondents saying, “It Rocks!”

Here are the overall Customer Satisfaction Ranking for 2017: 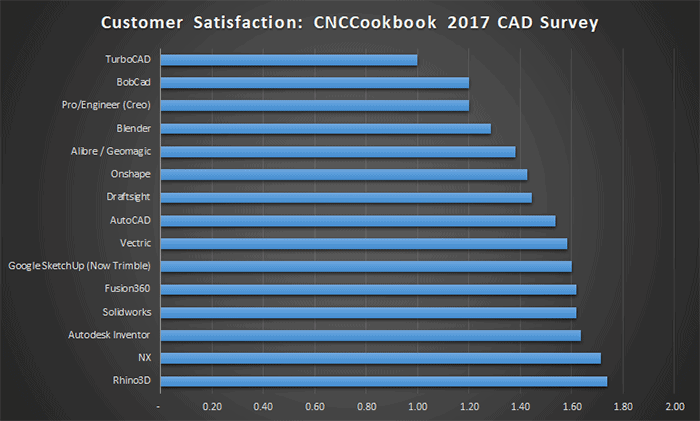 Comparing the rankings to 2016, here were the biggest moves:

In all, 50 packages were represented as being used in production in not quite 500 cases.  Here’s what the overall share looks like without any attempt at segmentation.  Let’s start with the Top 15 packages, which comprise 84% of the market: 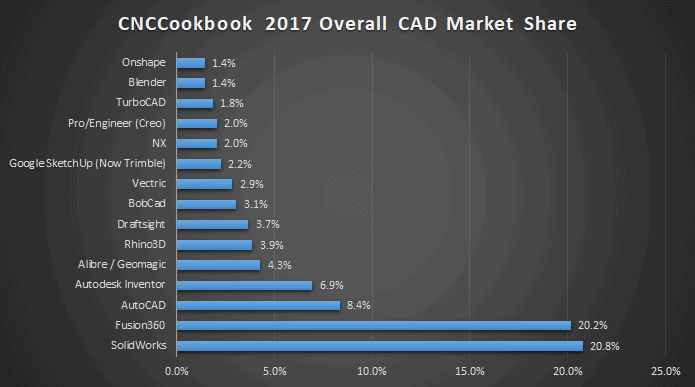 Compared with 2016, here are the trends and movements I see:

Here’s the rest of the pack: 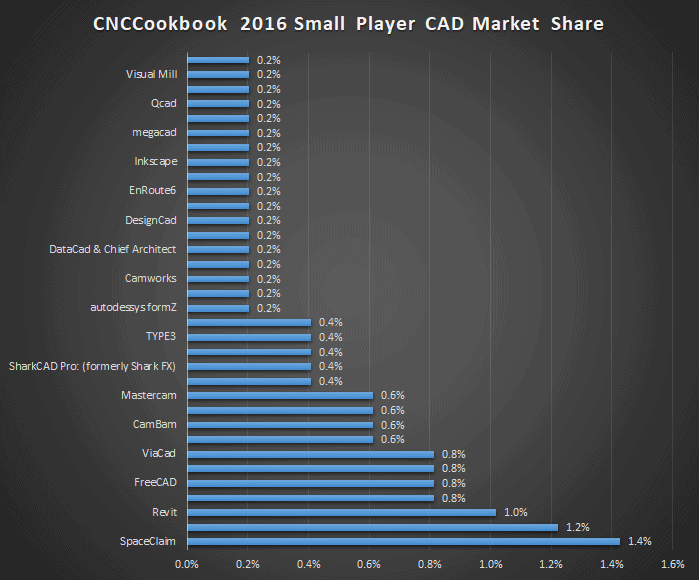 If Market Share represents packages in production, packages tried is closer to being “Mind Share.”  If you’ve tried a package, you’re aware of it and it has some mind share.

In aggregate, 55 packages were tried some 1428 times.  This suggests the average respondent tries about 3 packages before settling on one.

The 15 most commonly trialed CAD packages account for 82% of the trials: 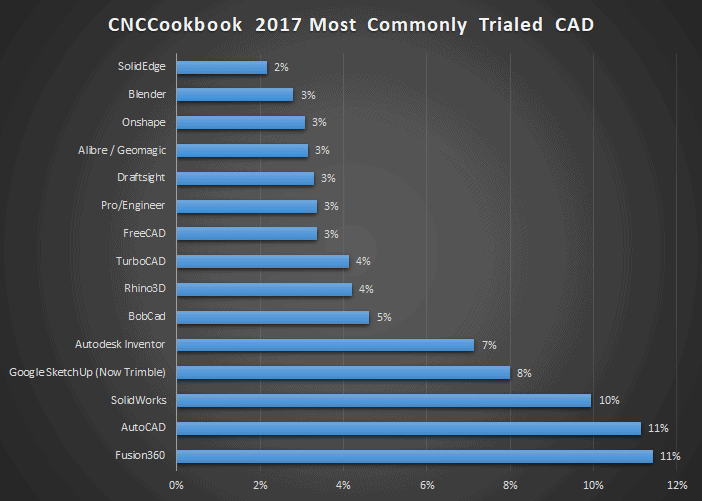 Here is the adoption rate from trial to use in production of our 15 most popular CAD Packages: 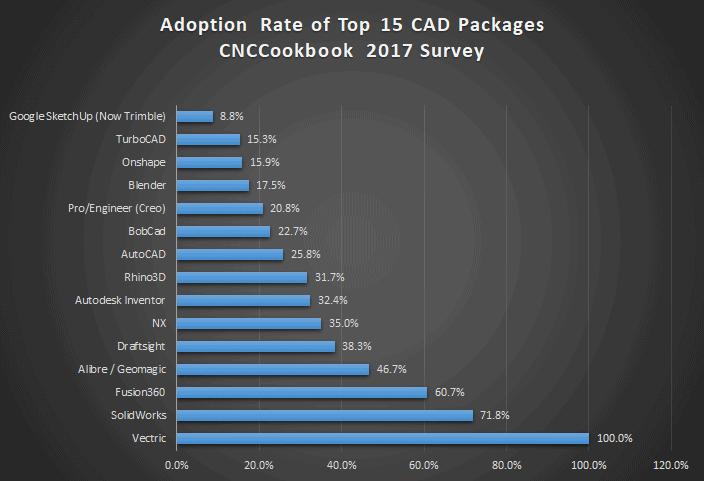 Vectric’s 100% adoption rate leads me to suspect it was bought as a CAM package and users discovered the CAD is pretty good there too.

Much like our CAM Survey, we can see that Fusion 360 is here to stay, but the major players aren’t going anywhere either.  This year, for the first time, a question was asked to determine the relative Free (plus educational and pirated) share vs paid share of the packages. 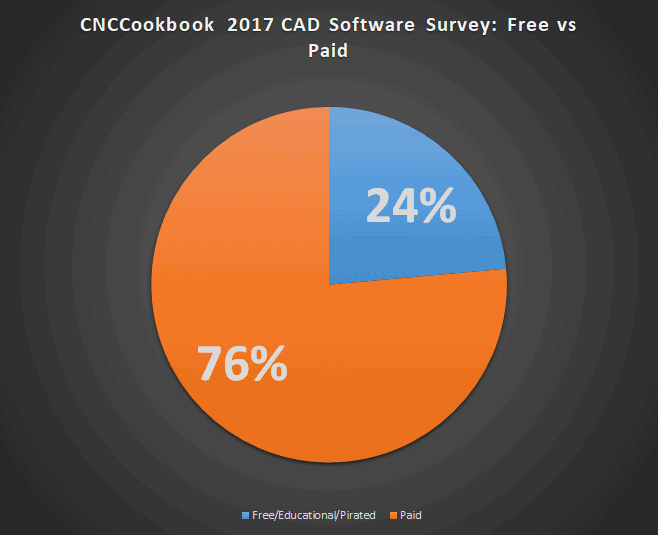 Only about 1/4 of the responses represent free, educational, or pirated software.  The survey was completely anonymous, and we didn’t ask anyone to reveal name or email, so respondents were more likely to be truthful.

If we go back to our 15 most popular production CAD packages, here is the breakdown on what percentage of the respondents are using Free/Educational/Pirated versions for each package: 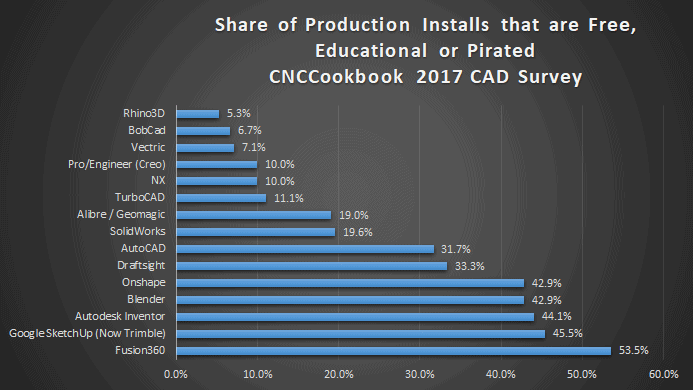 There’s no denying that free is a powerful tool to drive adoption, so I find it all the more impressive when a tool that has very low percentages of free users does so well in the market share comparison.

Here are the market shares discounting free.  In other words, we’re only considering respondents who say they paid for their production CAD: 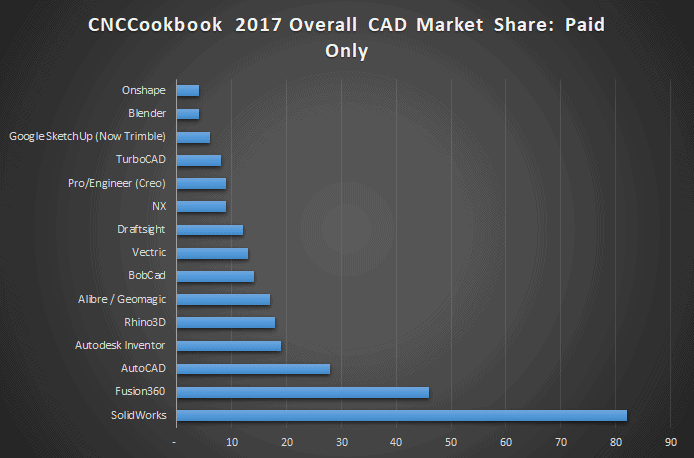 That changes the picture quite a bit, doesn’t it?  We still have the same four on top, but they trail Solidworks by a much larger margin.  Packages like Rhino3D and Alibre also start to look a lot more competitive.

The interesting thing about free, is just as nature abhors a vacuum, shareholders abhor a lack of profits.  Sooner or later most free things tend to get a lot less free.  Free is typically used as a tool to accelerate growth until market dominance can be achieved.

I have quite a lot more analysis to do, as well as Customer Satisfaction Awards to present.  I’ll do that via an update and republishing of this article.  Make sure you’re on our mailing list if you don’t want to miss future installments.  Just scroll down to sign up.