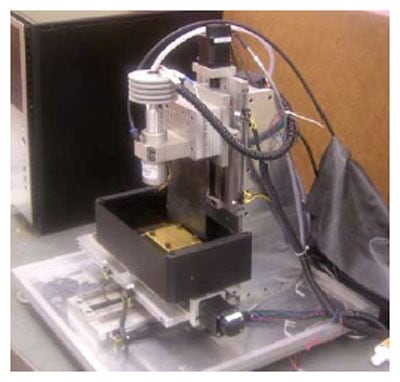 While on the subject of micromachining, I came across this interesting academic paper about how some students and faculty at Northern Illinois University built a pretty cool micro-mill that performs on par with commerical machines costing up to $100,000: A part made by NIU’s machine…

The machine is assembled from largely off the shelf parts such as the linear slides, stepper motors (no servos here to save on cost), and spindle. As you can see, its construction is pretty simple. Some surprises for me from this article:

– They used ACME leadscrews instead of ballscrews, relying on anti-backlash nuts to keep backlash under control. Ballscrews have gotten cheap enough I’d think they’re a better substitute these days.

– No servos, just steppers. When micro-machining, the forces involved are so small, that even the little NEMA 17 steppers were plenty to drive the axes.

– Though they started with Mach3, they found it produced unacceptible results–it wouldn’t track the tiny contours needed for micro-milling. They assumed this was due to the fact it was running via the parallel port with a non-real-time OS–Windows. They switched to FlashCut which is a dedicated system and their troubles went away. Given that there is more than one high-end CNC system built around Windows, I’m not sure how much of the blame I’d place on Windows. In fact, when you consider that FlashCut is also Windows-based, you have to pretty much discard the notion it is a Windows problem. What’s different is FlashCut uses a hardware step controller instead of making the parallel port do all that work. Of course we have the Smoothstepper to do the same for Mach3, and I certainly see considerable improvement from my Smoothstepper versus the parallel port.

Here are some photos of the two, seeing is believing:

Mach3 is on the left, FlashCut on the right. Mach3 proved unacceptible for these micro-milled toolpaths…

The team’s final results achieved with this little machine were quite impressive:

> 40,000 rpm spindle–essential for these tiny cutters

The NEMA 17 steppers direct drive an ACME screw with 0.05″ lead, which equates to 100 IPM if driven at 2000 rpm, which should be achievable with the small motors. Pretty cool little machine!