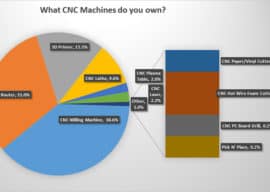 I launched a survey a few days ago and we’ve already had over 300 responses as I write this–clearly there’s a lot of passion amongst the Hobby CNC crowd.  I can’t blame them–I love CNC and every aspect of it.

Here’s what we found out:

What kinds of CNC machines do you own? 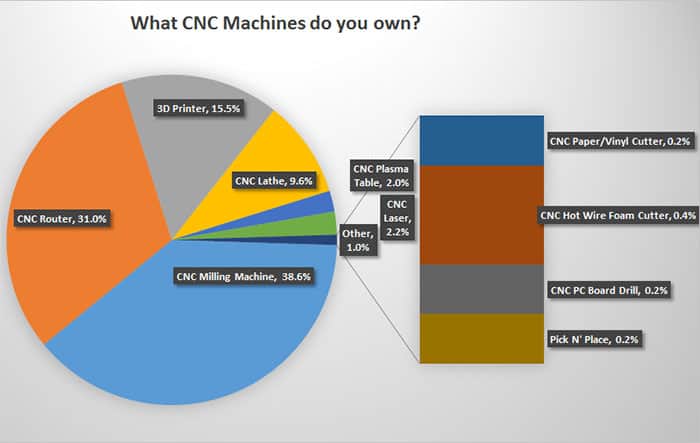 CNC Mills and Routers (really the same thing in many respects) make up the majority at about 70% with 3D Printers and Lathes following.  I would’ve expected the Lasers and Plasma tables to be a little higher percentage and the lathes a little lower, but this is what’s being reported.

How did you get your CNC machines? 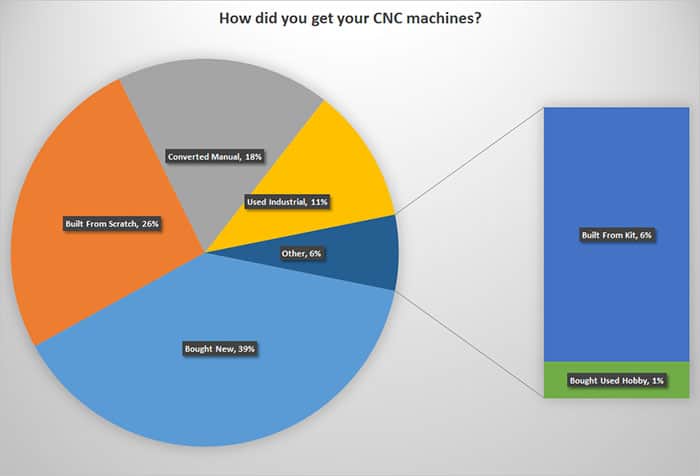 When I first started in CNC, there was no possibility of buying a new “Hobby Class” machine or of building a machine from a kit.  Today, these two DIY CNC approaches save considerable time and often money and are very prevalent.  It’s gratifying to see we still have a fair number of machines being built from scratch or converted from existing manual machines.  The “Built From Scratch” category is almost exclusively CNC Routers and Mills.

Have you ever used CNC machines at a MakerSpace or similar shared facility?

MakerSpaces can be a great resource in the community–an opportunity to get your feet wet with CNC, get some training, and make some parts without having the big up-front investment needed to acquire your own machine.  However, not too many in this audience have ever taken advantage of such a resource–just 7% of you.  I’m not sure if that’s because no such facility was available in your neighborhood or whether there was some other reason.

Have you used your CNC machines to make money? 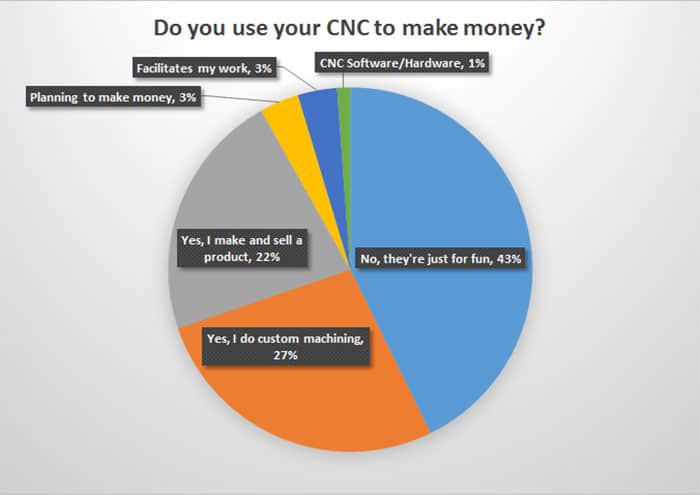 I was surprised to see that the majority of “Hobby” CNC’ers are actually “Professionals” in the sense that have used their CNC machines to make money or they plan to use them as such.  Uses range from Custom Machining along the lines of a Job Shop to Making and Selling a Product to various activities that facilitate another business.  Examples of using a CNC to facilitate another businesses included:

There are a lot of ways to make money with a CNC, it seems.  My friend John Bower, who runs the local Tormach dealer (Santa Cruz Electronics) has often said that if you own a CNC and you want to make money with it, it’s not hard.  People hear about it and pretty soon want you to undertake some project for them.  What’s hard is NOT making money with one, it seems.

You don’t have to make your entire living with the CNC either.  Sometimes it’s just some supplemental income that maybe even gets plowed back into the whole CNC thing to purchase some more tooling or maybe even another machine.

Which brands of CNC Machine do you own? 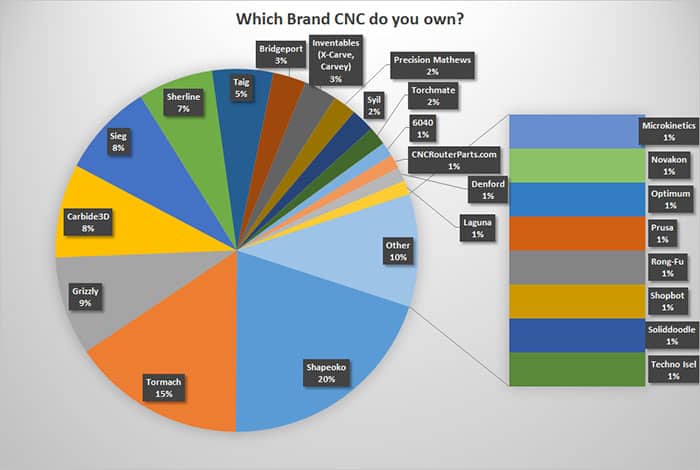 Looking at these market shares, it seems to me we are starting to see some consolidation.  In the entry-level CNC Router market, Shapeoko + Carbide3D have a huge lock–their combined market share is 28%.  The next nearest is Inventables with a 3% share.  In the Pro-Sumer category, Tormach is tearing it up with 15% market share.  Grizzly (9%) and Sieg (8%) are each doing a business that is largely providing the donor mills for conversion projects.  Given how inexpensively one can acquire a very good working machine, I will be curious to see how the DIY Conversion market does going forward.  As I have written before, with the new Tormach 440 mill’s pricing, it is hard to justify building your own as a cost-saving measure.  That’s not to say people will quit building and converting CNC’s–there’s a lot to be learned and sometimes you just want to have fun with a project like that.  But it is harder to justify economically.

Then there is the huge gulf of machines that are registering at less than 2% market share.  I didn’t even list all of them in the chart that I heard from.  It seems so hard for those businesses to last in the long run as the leading brands continue to consolidate and grow.  We’re seeing this in the 3D Printer world as various companies close their doors or downsize.

Which GCode language do your CNC machines use? 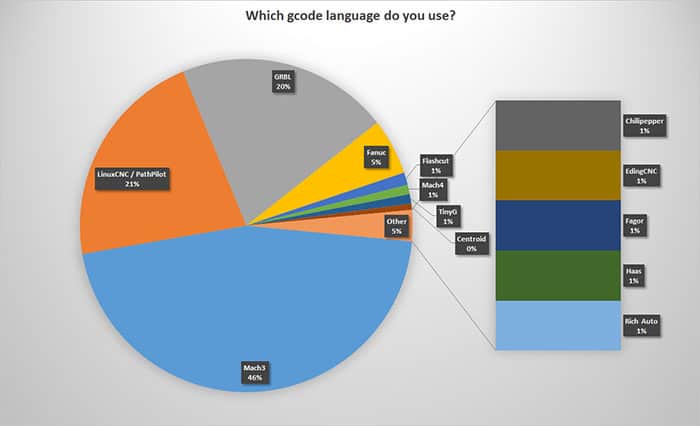 The GCode dialects have jelled into 4 big leaders: Mach3, LinuxCNC (PathPilot on Tormachs), GRBL, and Fanuc.  Collectively, they have 92% of the market.

It will be interesting to see the future of Mach3.  Is it largely used by this audience when converting manual machines to CNC?  If so, will that change as new machines and kits taker over share?  Are the majority of existing Tormach owners still on Mach3, and will that change as they update to PathPilot?

I think there’s still plenty of room for improvement in the GCode world, so we’ll have to keep an eye on this market carefully to see what the future will bring.

What Materials do you cut on your CNC machine? 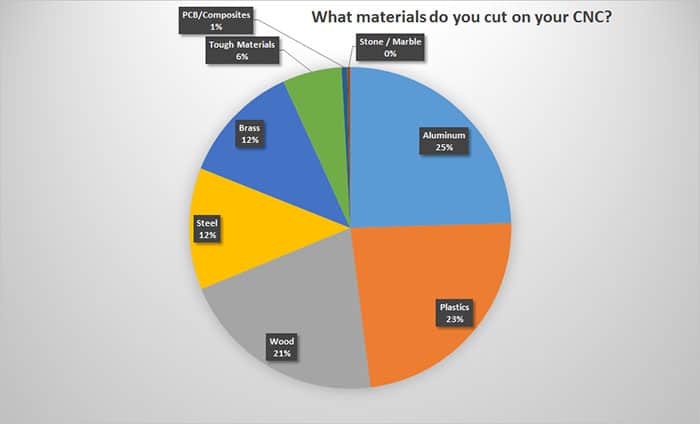 Pretty straightforward feedback here.  Aluminum, plastics, and wood are the winners in terms of popularity.  But our Hobby CNC’ers will cut almost anything given the chance.  All manner of paper goods, leather, and glass were also mentioned.

What do you make with your CNC machines? 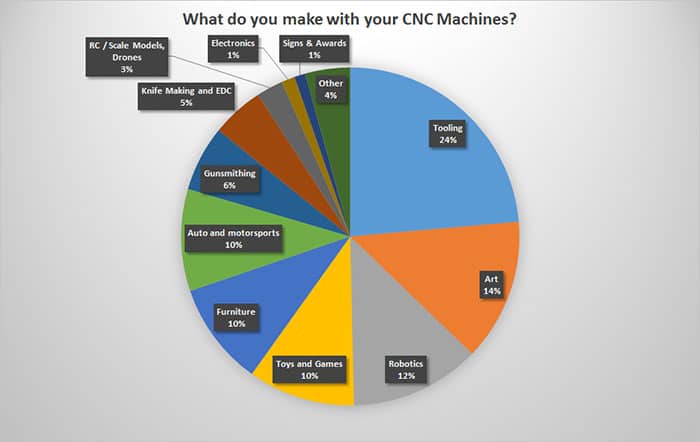 This was the most interesting and fun part of the survey to me.  Perhaps it would’ve been easier just to ask what don’t you make–our CNC’ers have got their fingers into every conceivable pie.  Of course everyone makes lots of tooling.  People I talk to are often disappointed that I don’t have a lot of things to show them I’ve made except tools.  Invariably they want to know when I will have made enough tools and I can actually make SOMETHING?

Art came in second place, which is very cool.  Of course it is art in the eye of the survey respondent and we don’t know much about what it might be.  Would someone call their jewelry art?  Perhaps.

Robotics put in a strong showing–apparently lots of interest in it.

There’s an active and vibrant community of Hobby CNC’ers out there and we know you’re having good fun.  Thanks for participating in our survey and telling us more about what you do!