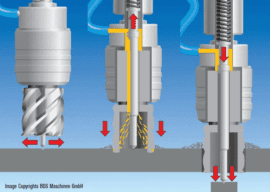 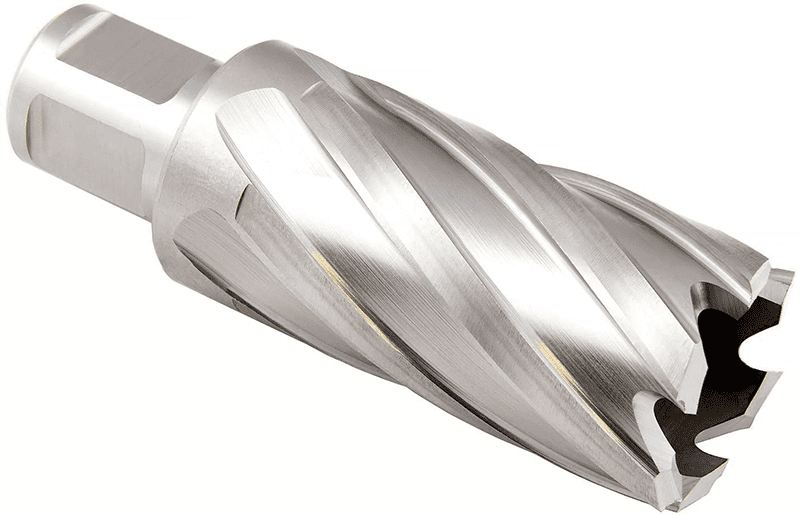 What is an Annular Cutter?

An annular cutter (also called a Rotabroach, core drill, core cutter, broach cutter, trepanning drill, hole saw, or cup-type cutter) is a special type of cutter for making holes.  It is similar to a hole saw for cutting metal.  What’s unique about an annular cutter versus many other holemaking solutions is it only cuts a groove at the periphery of the hole, which creates a solid slug that is removed from the center of the hole.

Why use an Annular Cutter?

Let’s say we need to make a 1″ diameter hole 1″ deep in some mild steel plate.  This table compares the performance of various cutters we might use to cut that hole:

I’ve listed these different approaches in ascending order of the time it takes to make the hole.  All times were calculated using our G-Wizard Feeds and Speeds software.

As you can see, an indexable drill is fastest, followed by a twist drill, the Rotabroach annular cutter, and finally, interpolating with an endmill.  Many CNC’ers would probably choose interpolating the hole first, and maybe follow up with one of the twist drill solutions if they were going to make a lot of holes and speed was of the essence.

Note that all three of the other approaches are significantly faster than interpolation.  Also, annular cutters are relatively inexpensive.  You can buy them in annular cutter sets that include a variety of sizes to get started: 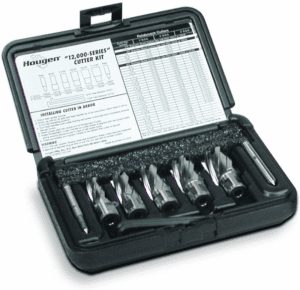 It should be said at this time that annular cutters have a significant drawback where automation is concerned.  Specifically, they don’t always eject the central slug reliably.  So, you either need to make sure the operator is monitoring for that, or you had better rig up a way to test whether the slug was properly ejected with some sort of touch sensor that will stop the g-code program if the slug is stuck in the bore.

Why then ever use an Annular Cutter?

For a narrow range of applications, they have some advantages.  For example, on a smaller lower powered machine (like a Bridgeport scale machine), they take the least horsepower.  If your machine is horsepower challenged to run a big twist drill or indexable drill, the annular cutter may just save your bacon.

Of course you could simply interpolate the hole with an endmill, but the annular cutter is noticeably faster too.  And that combination of speed at lower horsepower pretty much defines their niche.  They’re great on drill presses and other lower powered second op machines.

How to use an Annular Cutter

Annular cutters are set up with a Weldon-style shank and are intended to be used with set screw holders or chucks set up to engage the flats.  In addition, they have a central pin that ejects the slug.  The pin is called a “Pilot Pin” or “Ejector Pin”.

As the cutter goes down into the hole, the pin rests on top of the slug.  A stop in the machine will eventually push against the pin and eject the slug as you continue retracting.  Some designs include a spring to inject the slug so they can work on an unmodified machine.  On some models, the pin also controls whether cutting fluid is dispensed.

Here’s a diagram of the ejector pin in action: 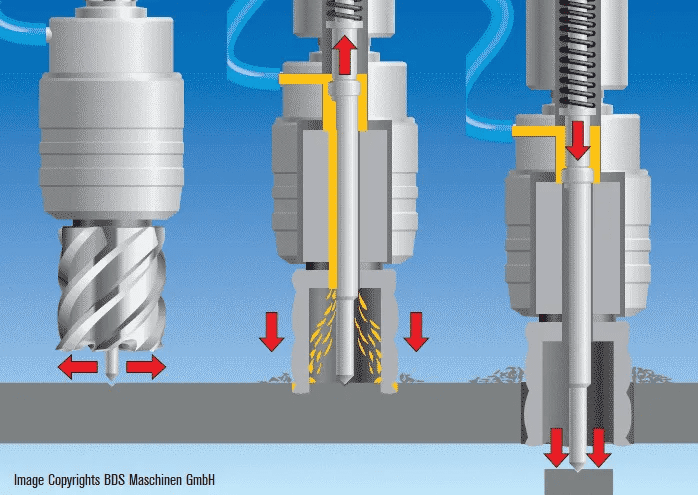 So, you need a machine that’s set up to do that ejection to use an annular cutter.

As with all cutters, you want to operate annular cutters at the proper feeds and speeds for best tool life and optimal performance.  Our G-Wizard Feeds and Speeds Calculator makes that easy, because it supports annular cutters.  Just choose them on the Tool menu and go from there: 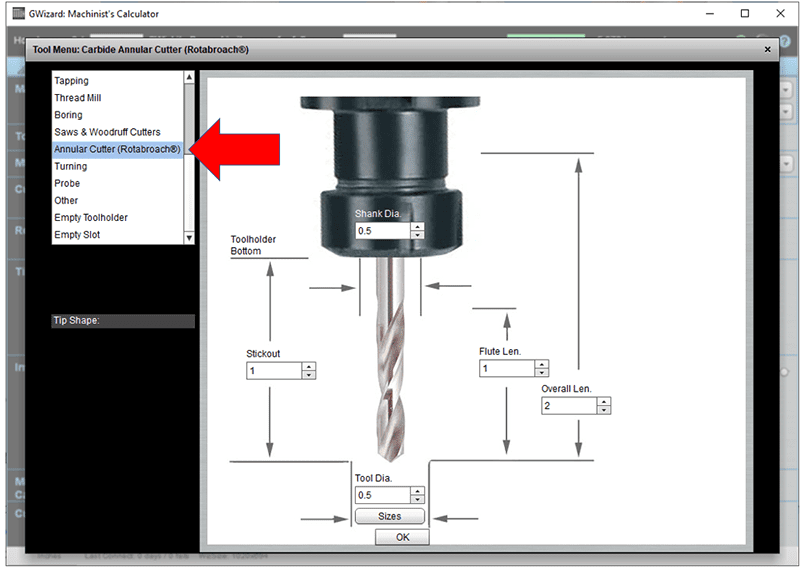 Annular Cutters can really save time for machines that are low on horsepower to use more potent cutting tools.  They take a bit of care, but just might be the right solution for your holemaking needs.