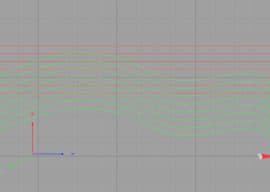 The G71 rough turning cycle available on many controls is really handy.  You specify a profile in g-code and the G71 cycle deals with roughing it out.  But not all controls have G71, and some earlier versions of G71 have various limitations.

This article is about using a little macro programming to implement a “poor man’s” G71 roughing cycle.  To do something like this, your control needs the following capabilities:

The basic idea revolves around the following g-code programming structure:

( Variables to set the initial conditions )

( Rest of program below )

( Subprogram for the profile of a pass )

How does it work?

Let’s go over how that basic loop works in plain English:

First, all the “Startup code” is executed.  This is where you get the establish the basic safe startup conditions you want, select the right tool, get the spindle running, and so on.

We are going to use G52 to shift the coordinates by the material radius each time.  This means our profile can used fixed coordinates and the G52 will just move that profile to the new material radius after each pass.  In this case, we are starting with 1.5″ as the radius.

The line “IF [#100 LE 0.0] GOTO 1100” checks to see if we’ve moved the profile all the way in to a 0 offset.  You can imagine there will be some profiles where you may not want to go to zero, so this is the line you’d need to change.  We could also break it out as a variable for convenience.

Since we’ve just started, we won’t go to N110 yet.  Instead we fall through to where it says “Call profile”.

As you can see, this little program will keep calling the profile, using G52 to shift it a little closer to center by the cut depth each time, until it gets to a zero shift.

The result of the simulated G71…

You can see the passes start out pretty far from center and move in each loop.

This code is a rough approximation of what you’ll need.  To put it to work, you’ll need to adapt it to your machine’s G-Code dialect.  There are probably various embellishments you’d like to make to the code as well, perhaps to set a finish pass.  I’m using a pretty aggressive rough cut of 0.200″ so you can clearly see what’s happening in the backplot.  You may want to adjust that as well.  You may also want different N-numbers.  Those are all easy changes to make and experiment with.

But having done all that, and hopefully debugged it with a tool like G-Wizard Editor, you’ll have created a handy routine that you can use for lots of different profiles on your CNC lathe.  There’s lots of other ways to code the loop I described, but that one is really simply, so hopefully that style will work for the largest number of controls.  I used Fanuc syntax there, but remember, your control may use a different syntax.

This approach is simple, but won’t run as fast as a real G71 because we use the same profile for every pass.  That means we have to cut a fair amount of air whereas a good G71 will take the shortest path down the length in a straight line.  Nevertheless, it’ll get your part made if you need a quick substitute for G71.

Be sure to check out our article on Using Mill CAM for Turning if you want some tips on how to program the profiles with your Mill CAM software.