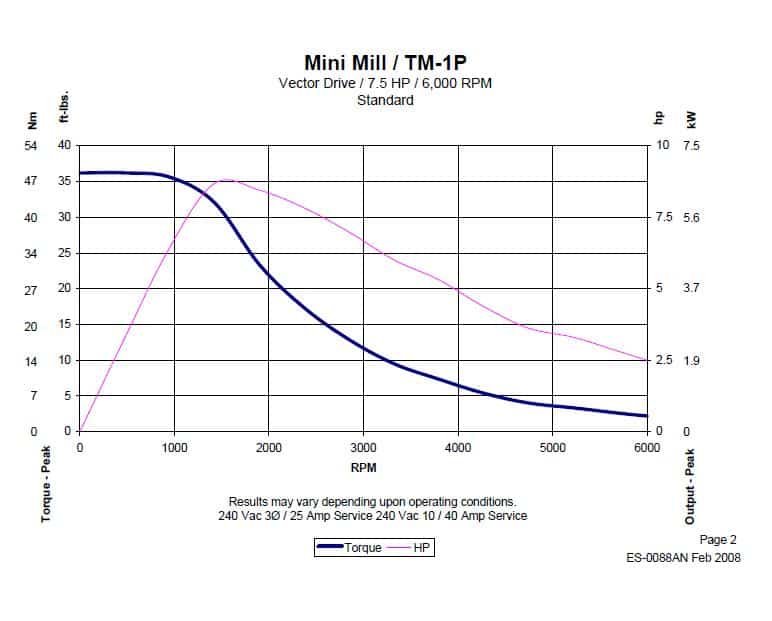 Imagine you’ve just purchased a new Haas TM-1 mill. You’ve been madly CAD/CAMing away on a new design, and you’re eager to see it turned into shiny machined bits of metal. The TM-1’s 8.5 HP spindle should make short work of that aluminum. You pull out your G-Wizard Calculator to set up the feeds and speeds. You want to do some roughing, so you pop in a 3/4″ carbide “corn cob” rougher, and set GW up for a 1/2″ depth of cut and a 1/2″ width of cut.

G-Wizard suggests 5194 rpm and 101 IPM for this job. You look over at the HP indicator, and see you’ll be drawing down 5.3 HP for this job–well within the 8.5 HP spindle’s limits. Dang, you almost feel sorry for the hapless chuck of 6061 you’ve tee’d up in your Kurt vise. This is gonna go like a hot knife through butter.

You close the door on the machine after a quick visual check, tag the green Start button, and settle in to watch that bad boy go to work. Seems like the cutter is barely into the cut when the spindle stops dead in the cut and you’re scrambling for the E-Stop. But, that feedrate is a little too fast for you and without much drama your cutter is snapped clean.

What the heck just happened? My friend, you’re a victim of an unruly spindle power curve. Your spindle doesn’t have the full 8.5 HP available at every rpm. In fact, for most rpms, it has much less. Here is the power curve for the Haas TM-1, for example: 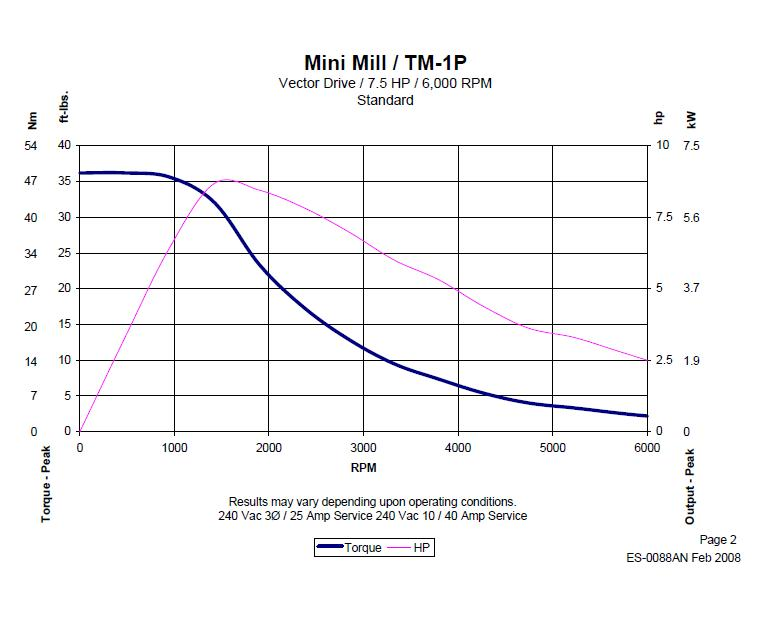 The pink line shows how peaky this spindle’s power curve is….

Follow the pink curve over to 5194 rpm and we can see that the power is way down here. You don’t have nearly the 5+ HP that the cut calls for.

I got to looking into this after a G-Wizard trial user complained that every single recommendation they’d gotten from GW had stalled their spindle. Turns out the had the little Haas mill. I was surprised to hear about this problem, and got to poking around for a while before I figured out the problem was the issue of trying to get aggressive when you’re too far away from the power peak. It’s almost a forgone conclusion you’re going to be there at some point. For example, aluminum loves more rpms, and this particular power curve drops all the way down to 2.5 HP if you max it out at 6000 rpm.

In order to help machinists manage this problem, the latest release of G-Wizard (1.600) adds the ability to specify a Power Curve Adjustment. The screen for it is accessed via an “Adjust” button next to the Hardware Profile Spindle HP on the Setup tab. If you press it, you’ll get this popup: The Power Curve Popup programmed for the Haas curve…

As you can see, I’ve set it up with the numbers for the Haas. Here’s how it works. First, there are 3 adjustment options:

– No Adjustment: Just use the peak at all rpms.

– Weight Adjusted: This is for very small mills, things like Sherlines and Taigs. GW takes the work envelope and the machine weight and de-rates the spindle power as necessary to compensate for the relative lack of stiffness on these machines.

– Curve Compensate: This is the one we want to help out our little Haas.

The curve is set up in anticipation of a peak. Think of the peak as a “V” shape. The Low Range is where you specify the rpm and power at the low end of the band. On the Haas chart, it shows 0 HP at 0 RPM, and that’s what we specified for the low end of the “V”. The Peak Range is where you specify your spindle’s power peak. For the Haas, I read it as 1500 rpm, 8.5 HP. Lastly, the High Range is the right leg of the peak. Again, the Haas looks like it is showing 2.5 HP at a peak of 6000 rpm.

That’s all there is to it. GW will then interpolate along that curve and use that as the HP limit for the particular rpm in use. Here is a screen shot of G-Wizard under these circumstances: What G-Wizard did was to set the HP Limit based on the power curve and the rpm (5194 rpm is what was requested). If the required HP is higher than the limit, it automatically scales back the feedrate until it gets an HP that falls within the limits again. It doesn’t compute a precise intersection, but leaves a little “fudge” room as these curves are not precise. It’s trying to be a tad conservative. You’re welcome to crank it back up a touch if you’re sure your spindle won’t stall.

If you have a machine with more than one speed, try using a separate hardware profile for each speed range. For example, you could create a “VMC – Steel” and a “VMC – Aluminum” profile.

Hopefully, this new feature will be helpful to a lot of machinists. I know I talked to another machinist who said that even though they run 20 HP mills, they only have one speed and so they don’t bother trying to use twist drills larger than 1″ diameter–they just can’t rely on the machines to produce enough power down low when using big drills in steel.