How to Survive Your First CNC Router Fire 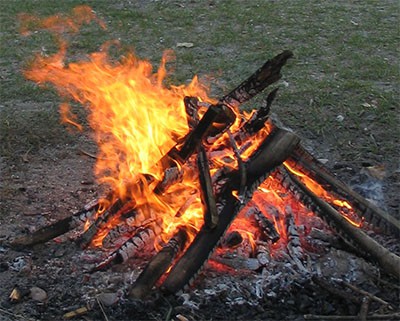 Take some sawdust and add heat.  My brother likes to use a 9V battery touching steel wool to make it red hot.

It bursts into flames pretty easily and you’re on your way to feeding your little fire larger and larger pieces of combustible material until you have a campfire happily burning.  If you’ve done your job right, you’ve arranged for the right draft to facilitate oxygen reaching the fire and perhaps you’ve even had to blow on it while cupping your hands around it to get it to take off.

So what’s the difference between that and a CNC Router?

– You’ve got plenty of combustible dust available–that’s what the router does to the material it’s cutting.

– You’ve got a source of heat–that cutter spinning so fast will get hot in a hurry if it rubs up against the material being cut for very long.  It’s made of carbide so it’ll resist that heat until it is way past the point of being hot enough to start a fire.

– There’s better fuel available than the dust, either your workpiece or more likely the spoilboard you’re cutting on.

– The draft is no problem, especially if you’re running a vacuum table that’s pulling air steadily through to the vacuum pump, or a dust collection system that’s doing the same.

Congratulations, you’re now beginning to realize that a fire in your CNC Router is probably just a matter of time.

Seasoned router users know this and prepare for it.  That brother I mentioned runs 3 CNC Routers for a local company and these little fires are common.  I’ve also had more than one shop owner tell me their CNC Router is the most dangerous machine in the shop due to the propensity to catch fire.

Here are some thoughts on how you might prepare for the fire eventuality, but be aware that fire is a tricky and dangerous business.  No amount of preparedness can insulate you for the potential of damage to your equipment and facilities or from potential injury. This story is just a set of ideas, nothing more. You’ll want to look into your specific situation to see what’s best for you.

It’s always best to minimize the risk of fire in the first place.  You can never eliminate it, but you can reduce practices that outright encourage it.

If you’re in doubt about a new job, run it for a minute or two, stop the spindle, and check the cutter temperature.  If it’s too hot to touch, you should try to fix it with better feeds and speeds or a new cutter.

Our G-Wizard Calculator software has a rubbing warning that will let you know when the chip loads are getting too low.  This can help you eliminate the problem right at the CADCAM stage before the job winds up on the router table.

Be aware that machine acceleration effects can result in your feeds and speeds being slower than you expect.  Here’s a quote from Woodweb about just such an incident that led to some router fires:

I started a few fires on my current machine early on before realizing a very subtle problem. I had correctly calculated feeds for maximum travel speed, but on this particular machine acceleration is fairly slow. Whenever I had a slightly dull tool I was creating a lot of heat in the corners where the machine slowed down. Took me a while to figure this out. The previous operator had set a few using downshear tooling over a spoilboard. – See more at: http://www.woodweb.com/knowledge_base/CNC_Shop_Fire_Risk.html#sthash.0buqdnLK.dpuf

Our G-Wizard Editor has the ability to take acceleration capabilities for a machine and figure out their impact on the actual feedrates.  It can be useful for spotting these cases.  Absent a tool like GW Editor, you’ll just have to avoid running too close to the rubbing limit.  Use GW Calculator to figure that limit and then try to run at a much higher feedrate.

2.  Use sharp cutters.  Cutters can dull rapidly, especially when you’re cutting materials like plywood or MDF that can often contain grit.  Use carbide for these materials and make sure you’re replacing the cutter often enough.  A dull cutter can cut the material, but rub at the same time and build up heat quickly.

3.  Ramp into your cuts–don’t plunge.  Ramping in a straight line or helixing down in a circle is a much gentler entry to a cut than plunging the cutter down like a drill.  It makes it easier to clear the chips from the cut out of the way.

4.  Use the right cutter if you are plunging.  In particular, never plunge a downcut  or compression bit.  They force the chips down into a hole where they have no place to go.  This can create heat and provide fuel that very quickly leads to a fire.

5.  Clear the Chips!  Speaking of chip clearing and ramping, any time the cutter is recutting the same chips the potential exists to create more friction and more heat and there’s more material right next to the source of the heat to catch fire.

6.  Avoid cutting too deeply into the spoilboard.  Check your maximum Z depth for your gcode program and use that to determine how into the spoilboard you’re cutting.  It’s very easy to check Z depths on programs and even get an error message when they’re too deep by using G-Wizard Editor’s Soft Limit feature.

7.  Avoid dwelling with the cutter in contact with or near the wall or floor of the work.  Dwelling is when the cutter comes to a stop in X, Y, and Z but is still spinning.  If the cutter is near a wall or floor, it can rub and generate a lot of heat.

8.  Try to use a two stage design with cyclone separator for your dust collecting system.  This will help prevent metal objects sucked in from hitting the impellor, sparking, and potentially creating a dust fire or explosion.

It’s often hard to see a fire as it may be just a little smoldering ember of your spoilboard, buried under your workpiece.  A vacuum table will pull any flames down from the ember into the vacuum chamber below.  So you must be very attentive to more subtle signs than open flames bursting up.

1.  Never leave the machine unattended unless you’ve invested in purpose-built CNC Router fire sensing and suppression equipment for Lights Out operation.  It’s so tempting to walk away from a CNC Machine to do something else, and you can do that to an extent with a router, but stay close enough to spot the signs of fire if they are there.  Never leave one running alone in a room by itself.

2.  At the first sign of smoke or the “red cherry” that often signifies a fire is underway, you need to check whether there is a fire.  You need to have worked out your procedures for what to do when checking.

If you are running a vacuum pump, remember that it is feeding the fire oxygen, but turning it off may make the fire flare up and engulf the spindle of your machine.  You’ll want to get that spindle up and away from the scene of the potential fire first and quickly.  Then shut down the vacuum pumps and take a careful look at what’s going on.

Blow or brush the chips out of the area so you can see better.  Take care not to shift the work if you plan to go back to it when you turn the vacuum table back on.

3.  The smoke smell may be at the exhaust of your vacuum or dust collecting system.  Are you in a position to notice that?

4.  What are the chances the fire could be sucked into a vacuum or dust collection system where there is potentially a lot more fuel handy?  Are you set up to spot that problem quickly before the fire gets serious?

6.  You can’t rely solely on normal fire detection sensors.  Smoke alarms and the like will typically require the fire to get much further out of hand than you’d like before they’re triggered.  They’re not a substitute for properly monitoring the machine while it works.

Be Ready When You Discover Router Fires

Okay, you’ve successfully spotted a fire.  Hopefully it is in the early stages.  You’ve started your shutdown procedure, whatever that is, and you’re ready to put the fire out.  Consider the following:

1.  Are there fire extinguishers close at hand?  You shouldn’t have to go far to find one.  There should be at least one that’s clearly visible, perhaps near the door since that’s where you’ll head if you don’t find one in the room.

2.  Are your fire extinguishers charged and ready to go?  If the darned things have been sitting there unused and untested for 15 years, they’re probably not going to be as helpful as you’d like them to be in an emergency.

3.  Most commercial shops are required to have a fire sprinkler system.  By the time it is activated, a fire will have gotten far enough to seriously damage your machine and perhaps even nearby machines.  Don’t plan to have the sprinkler system be your plan for putting out the fire.  It’s a last ditch backup.

4.  Are you set to summon help quickly if you’re unable to get the fire put out?

5.  Can you alert the rest of the facility quickly so they can help or evacuate?

6.  In the worst case, the CNC Router is blazing away, can you get out of the room to go get help or is it blocking the only way out?

Be safe with your CNC Router!