Results of Our Setup Sheet Survey 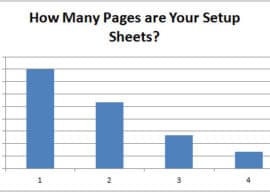 As part of our post, “The Art of the Setup Sheet”, we ran a survey to see how shops were approaching their Setup Sheets.  Here are the results:

How Are Your Setup Sheets Delivered?

– 33% make them available on computer or tablet

Frankly, I was surprised and impressed to see such a high percentage online.

How Are Your Setup Sheets Created?

– 60% using office software such as MS Word or Excel

– 20% are handwritten on a standard form

– 20% are generated by CAM software

I was surprised here at the number that are still handwritten.  Setup sheets are a form of documentation that can be useful to archive and keep around.  That’s hard to do when they’re hand written.  The use of Office software to create them is better, but seems labor intensive.  Only a few are using CAM, but for most of the packages I have seen, it’s not that easy to set it up.

What Kind of Information is On Your Setup Sheets?

What is all of the information needed to reset a machine for a new job?  There’s quite a bit when you think about it, and this list reflects that.

For everyone, it’s clear that the Setup Sheet plays a major role in getting the Cutting Tools and Fixtures right for the job.  The header is just identifying information for what job the Setup Sheet is intended for.  Rough Stock information and an Operations List are also extremely handy to have.

Information that’s seen a lot less often but still seems valuable is information on the g-code, a setup checklist, information on the CADCAM (such as file names and version information), and information on what inspections and Quality Control are expected from the job.  Presumably all this is tracked elsewhere for most shops.  It would be nice if the Setup Sheet could be the one go-to document that brings it all together.

Do You Use Photos?

I’m surprised these numbers aren’t higher.  Almost everyone has a phone capable of taking photos, and they are so useful to have.  Probably the most common thing brought up in the comments was photos, indicating the demand is there.  The fact that people aren’t using them more makes me wonder whether it’s just too painful to integrate them into the Setup Sheets so it isn’t being done.

How Long are Your Setup Sheets? 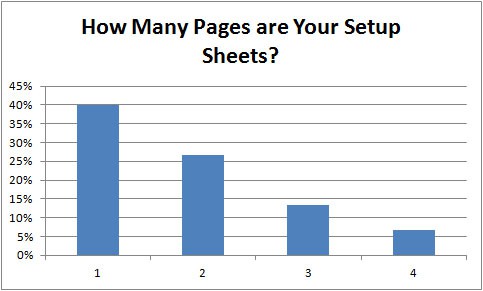 Most, but not all, Setup Sheets are short…

Most, but not all, Setup Sheets are short.  Given all the information some incorporate, I suspect there is a trade off here.  At one end of the spectrum is the desire for something short and concise.  Hence the popularity of the one pager.  But it’s hard to see how a single page can really effectively document everything required to set up a job on a machine.  Is that information simply tribal knowledge?  Is it being figured out new every time someone new is trained to setup for the job?  Is it being taken care of somewhere else?  And is the push for brevity reflective as much of a desire not to invest much time creating Setup Sheets as it is a reaction to how useful longer Setup Sheets may be?

I’m thinking it’s the latter.  Unless you have some means to help automate Setup Sheet creation, you’re going to want to keep it short.  The more you can automate (for example generating them from your CAM software), the more information you can afford to carry along in there interests of fully documenting the job.  There’s some fundamental tension here and at least one participant in an online thread about Setup Sheets that I started over on the LinkedIn CNC Machining group opined as how Management didn’t understand how valuable they were and therefore were unwilling to invest time in making them better.  He thought that was wrong and I have to say I agree with him.

There were a number of great suggestions scattered around:

We got just under 20 responses, which is a little light compared to other surveys.  Nevertheless, the responses, and especially the comments, showed those who participated were engaged and interested.

I’ve been thinking about how to improve Setup Sheets for a long time.  It’s one of the things that got me started building our upcoming G-Wizard ShopFloor product, and this survey and article are a direct result of those efforts.  The product is really focused on maximizing teamwork and helping everyone on the ShopFloor to have exactly the information they need when they need it and with as little effort as possible.  Clearly Setup Sheets are a critical part of that information so we’re making them a first class part of the product. I can’t say too much more since ShopFloor is a good few months from Beta Test readiness, but suffice it to say I am listening hard on topics like this.  If you want to keep abreast of G-Wizard ShopFloor, be sure to sign up for our weekly Blog Newsletter below.  We’ll post news here first and foremost as it develops.