G-Wizard Editor has canned posts that allow it to simulate g-code from all of the following CNC Controls:

You can modify any of these posts to come up with posts for most other controls.

It’s extremely simple, for example, to create a metric version of any post.

FADAL’s were extremely popular entry-level VMC’s in their day and there are still tons of them out there.  The FADAL controllers had 2 g-code dialects, and this new post is for their Fanuc-compatible dialect.  It includes a number of interesting labor-saving features not found in Fanuc’s g-code.

Here are my three favorite additions that this new GW Editor Post Handles:

The FADAL guys realized that the single letters being used in g-code left a lot of available candidates, and they took advantage of that with their “E” and “L” words.

Likewise, for defining and calling subroutines, FADAL offered the “L” syntax.  Basically, “L” is followed by 4 digits.  The first two digits tell which subroutine, from 1..99.  The second two digits are a repeat factor telling how many times to call the subroutine before moving on.  For example, “L1008” would call subroutine “10” eight times.  If the repeat value was “00”, it meant that the line was going to define the subroutine, like this:

Most of the time in a g-code program is spent moving the cutter at feedrate, whether in a line (G01), arc (G02/03), or canned cycle.  In between there are brief calls to Rapids (G00) to move from one place to the next.  G05 switches to rapids for just the line its on.  When that line has finished, it automatically goes back to whatever mode the program was using before it executed the G05.  That saves having to set it back and is a nice convenience.

FADAL has been our most popular request for a new post that GW Editor did not have–it has gotten 67% of the votes.  Oddly, I am not aware of another GCode Editor/Simulator that has a good FADAL post.  Given how large the community is, hopefully GW Editor can help some of them out with their FADAL GCode.

If you already have GWE, make sure you’re on the latest release (v1.98 or later for FADAL support).  Click the “Download Latest Posts” buttons on the Setup page to bring down the new post. Then use the “Browse” button to select “FadalMill” as the post for your machine. 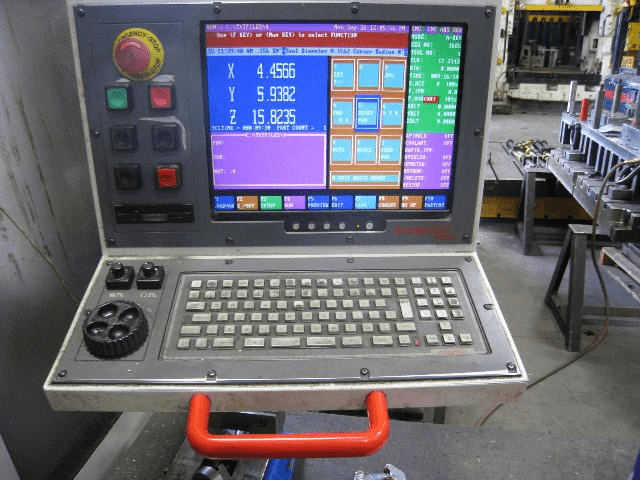 People tell me they love their Bridgeport DX32 controls.  There’s a small but vocal minority of folks still using them, and the DX32 topped the list of requested Post upgrades on our recent G-Wizard G-Code Editor Survey.  So, I rolled up my sleeves  and over the last 2 releases of G-Wizard Editor, I added a bunch of things to the post that deal with the unique g-code dialect of the DX32.  In case you thought g-code is just g-code, here are some of the “big ticket” items I tackled:

The DX32 uses what I call “Triple Z’s” on the drilling cycles.  In other words, there are three Z-words in the block that specify:

For most controls, repeating a word on a line is an error.  Not so the DX32 and its “Triple Z’s”.

Fanucs and many other controls use a subprogram syntax most g-code programmers are familiar with.  But the DX32 does something completely different:

“$” signifies return from the subprogram just as “M99” does on Fanucs.

I’m sure there’ll be more things from my DX32 users, but this moves the ball considerably closer.

This is not too hard to read.  You can see the various “Word.<letter>” commands set up the exact allowed syntax for each Word and Address combination.  This is a common source of differences for controls.  “#include” means to start with some other post so we can just tell what’s different from the other post.  In this case, we start from a Fanuc post.  Then we have a long series of “Post variables” that set up how things work.  These are the same Post variables you change under “Setup Post”.

You can see we have one specialized M-code definition for “M20”.  It’s an M-code that was in some sample code that was sent to me that was showing an error message.  It’s very easy in GW Editor to simply ignore either a G-code or an M-code but still give it a useful Hint.  In this case, “Spindle Orient OFF” doesn’t affect the backplot in any way so this is a good way to handle the “M20” code for this post.

Just wanted to give an idea of how the Posts work.