Cnc Rack and Pinion [vs Belt Drive or Ballscrew] 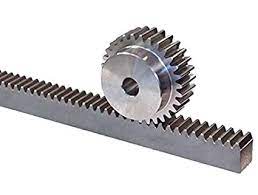 How a rack and pinion drive system works

A rack and pinion is a type of linear actuator that comprises a circular gear (the pinion) engaging a linear gear (the gear rack), which operate to translate rotational motion into linear motion.

A Rack and Pinion Drive…

They’re most commonly used on cnc machines such as CNC Plasma Tables and CNC Routers where they are a good match for the long travels and other performance needs.

Rack and Pinion Advantages and Disadvantages

Typically, a rack and pinion drive system would be compared against belt drive at the lower end and ballscrews at the higher end.

A helical gear rack differs in that its teeth are angled. This allows a smoother, lower friction movement resulting in better performance than a straight-cut gear rack.

One of the biggest challenges to accuracy is the accuracy with which the gear rack is made. If the teeth are not precision aligned, accuracy will vary over the travel.

It is possible to compensate for this by measuring the actual position and applying compensation in the controller software based on those measurements.

It is also possible to invest in greater accuracy gear racks and pinions.

One area to pay particular attention to is the mountain of the various sections of gear rack and how they fit together.

By default, a Rack and Pinion will have more backlash than a ballscrew. There are various ways to reduce that backlash.

First of all, increasing the quality of the teeth as well as their mounting accuracy will help.

Second, mounting the drive motor so it can be tensioned into the rack will help.

Lastly, the most sophisticated systems use split-pinion drive or dual-pinion drive, where one pinion drives while the other is tensioned to remove the backlash. 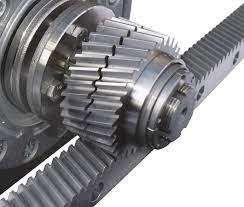 Split-pinions are made of two pinion halves — one which is fixed, and one which is axially spring-loaded. During setup, the split-pinion is first adjusted to remove the mesh backlash; it is then preloaded to compress the spring up to the operating load of the application.