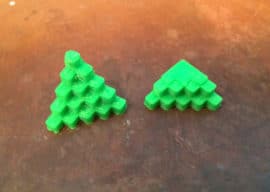 Machine tools of all kinds need adjustments from time to time and 3D Printers are no exception.  If anything, I have found mine to be quite finicky as I go through the dialing in process.  In this article I want to talk about calibrating your extruder steps.  That is, the number of steps the motor on the extruder makes to achieve a certain result.  Adjusting this value is critical because it determines whether the extruder is injecting too much or too little filament plastic compared to what the software is expecting.

How do we choose the right value for this setting?

There’s more than one way.  In theory, we’re talking steps per some unit distance, so we could simply mark the filament relative to some distance, command the extruder to run 10mm of filament through, measure exactly how much went through, and adjust our number accordingly.  This is a good step to take, but rather than choosing the “right” value, I wanted to get the “best” results, where “best” is the best subjective result, so I opted for a different method.  I tested values on either side of “right” to see which one produced the best results on a test model I was printing.  This method is a bit more time consuming because the model takes a while to print, but I feel the results are well worth it.

The method is based on “Triffid’s Hunter’s” method for fine tuning E-Steps, which the excellent SeeMeCNC Rostock printer’s manual suggested.  I’ll just run through how I did it here.

To start with, a suitable test model is needed.  I used the one Triffid recommends, which is a 5mm Cube Stack Test from Thingiverse: 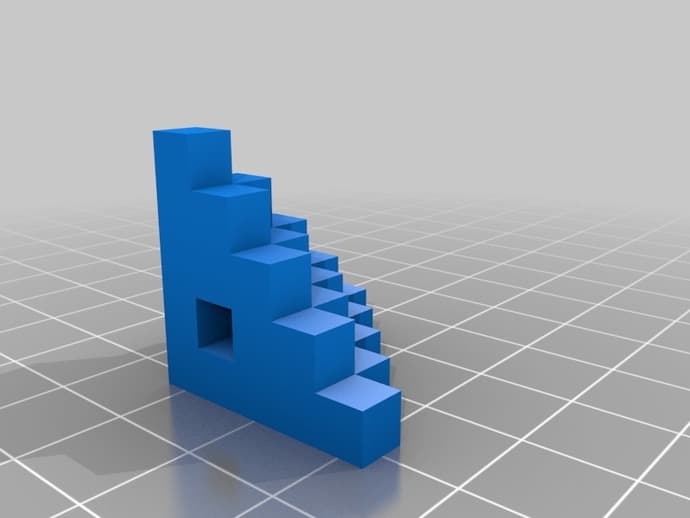 This is a good test because we get to see surfaces, edges, and gap bridging with ceilings, plus it isn’t too large an object so it is easy to do a number of them.  What we’re looking for is an E-Step setting that does the following:

–  Minimizes globbing and other artifacts.  Too many steps can extrude too much plastic and leave globs and strings around the model.

–  Does clean infill layers that have gaps between the lines of plastic.  Too many steps will extrude to much plastic and prevent the infill from having the gaps it is supposed to.  Infills are not supposed to be solid unless you have them set to be.  We used a 95% infill on this test to make the lines close together, but not solid.

–  Solid areas must be solid.  Too few steps and there’s not enough plastic being extruded to make a good solid layer.  Pinholes start to form.

The Rostock manual recommended an initial setting of 92.65 steps per mm.  I was getting some excessive globbing and blobbing (my technical term for it), so I had already embarked on adjusting the E-Steps by measuring how much filament was being fed.  This led me to turn down the number to 89 steps/mm from 92.65.  Apparently each extruder is different.  Here is a photo of the results at 89 steps/mm: 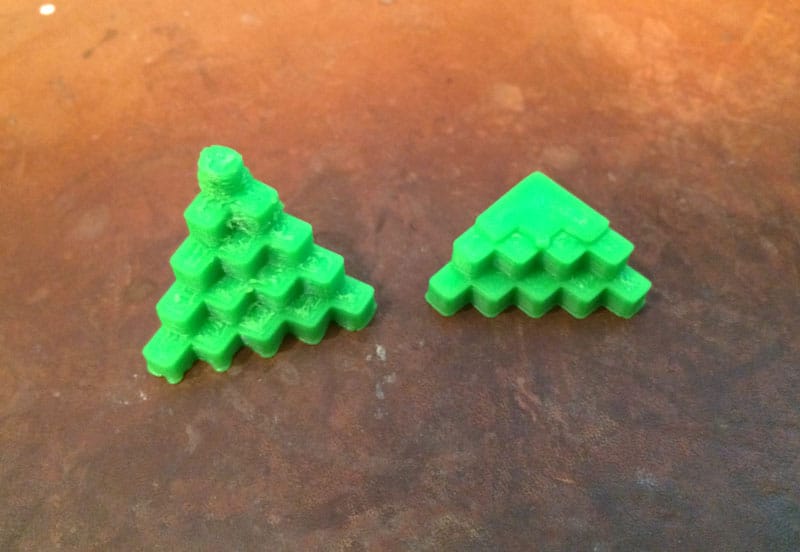 Results at 89 steps/mm.  The one on the left has the PEEK fan disabled…

The model on the left looks particularly nasty and globby.  They were both done at 89 steps/mm, but the one on the left shows what happens with no PEEK fan.  I wanted to show this because I had a broken PEEK fan that had to be replaced and so I had seen firsthand how much difference it makes.  The PEEK fan is a little fan that’s arranged to blow on the center section of the extruder.  This creates a cool zone that sharply defines the liquid plastic on one side and the solid on the other.  Without the fan, this zone can be a lot more variable, which plays havoc with accurately metering the plastic.  As you can see, it leads to the extruder oozing too much filament when the other variables are properly set up.  The model on the right is a big improvement.  The one on the left is also a good, if exaggerated, demonstration of what too many E-Steps/mm looks like.  Once the PEEK fan is in operation and I am working from a partially calibrated result, it is much harder to see what’s happening except by comparing two models and deciding which one is better.  I’m using ABS filament for these tests, which I believe is a little more finicky than PLA too.

Triffid Hunter’s test talks about changing the E-Steps during the printing of the models and watching the result in real time, but I found the differences to be too subtle in my case and I couldn’t get close enough to really look the model over.  I settled for simply stopping the print job after a couple layers of the 5mm cubes had been printed so I could scrutinize both the cube tops and the infill of the partially completed layer.

Here is the next series of tests: 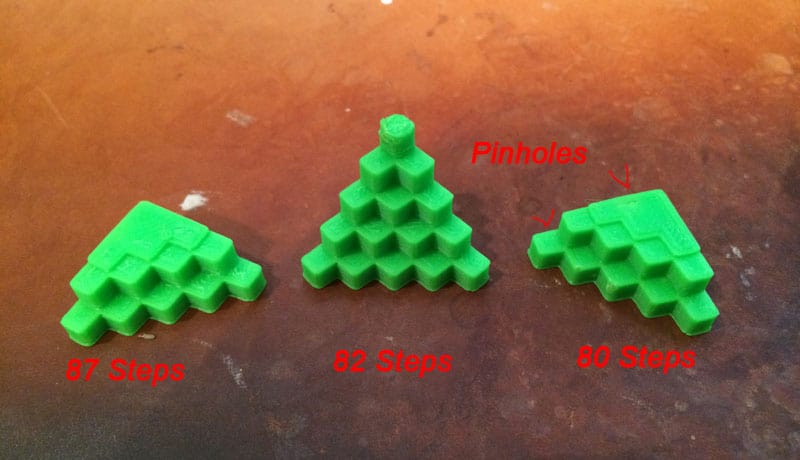 I proceeded to take down the number of steps/mm until I had gone too far, and then I backed up.  So, I did one at 87 steps/mm.  I was mostly looking at the quality of the tops of the cubes and it got a little better.  82 Steps was better still.  The 80 Steps version looked better for the most part, but I had to stop there as I was starting to see pinholes that were not filled with plastic.  I wound up with the 82 steps/mm setting, printed some more models, found a pinhole in a larger model of an iPhone case, and I am currently running at 83 steps/mm.  Aside from the pinholes and the quality of the surfaces, the gap bridging was another good indicator.  The first model sagged badly while the last model was nearly perfect.

This adjustment required an afternoon’s work which I mostly spent doing other things while the printer printed alongside my computer.  This morning, my wife walked up, saw the little green blocks and picked them up.  She immediately remarked that one of the full-sized models sure looked a lot better than the other and wondered why, at which point I explained what I’d done.  The results of fine tuning your E-Steps are well worth it and obvious even to the untrained eye!